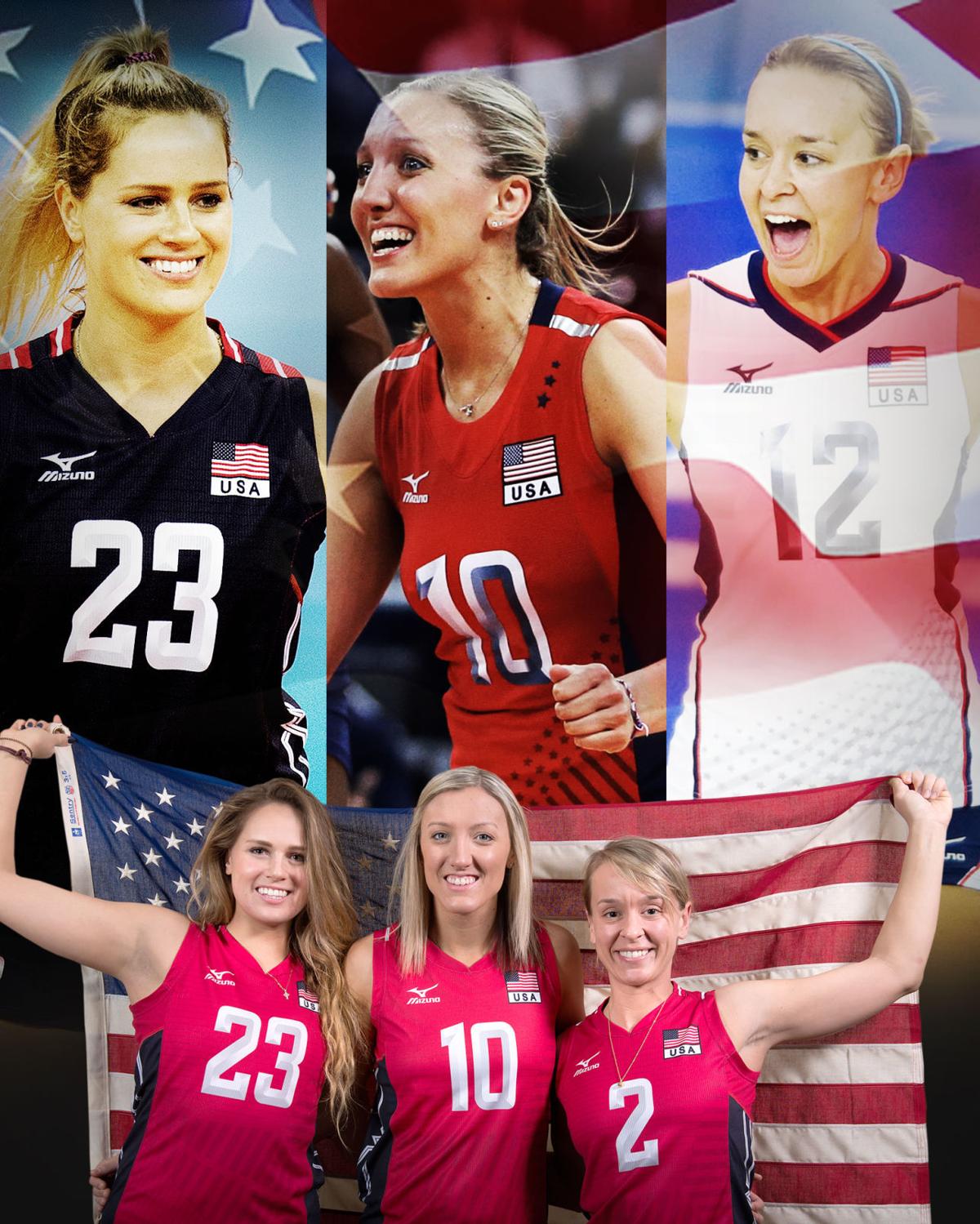 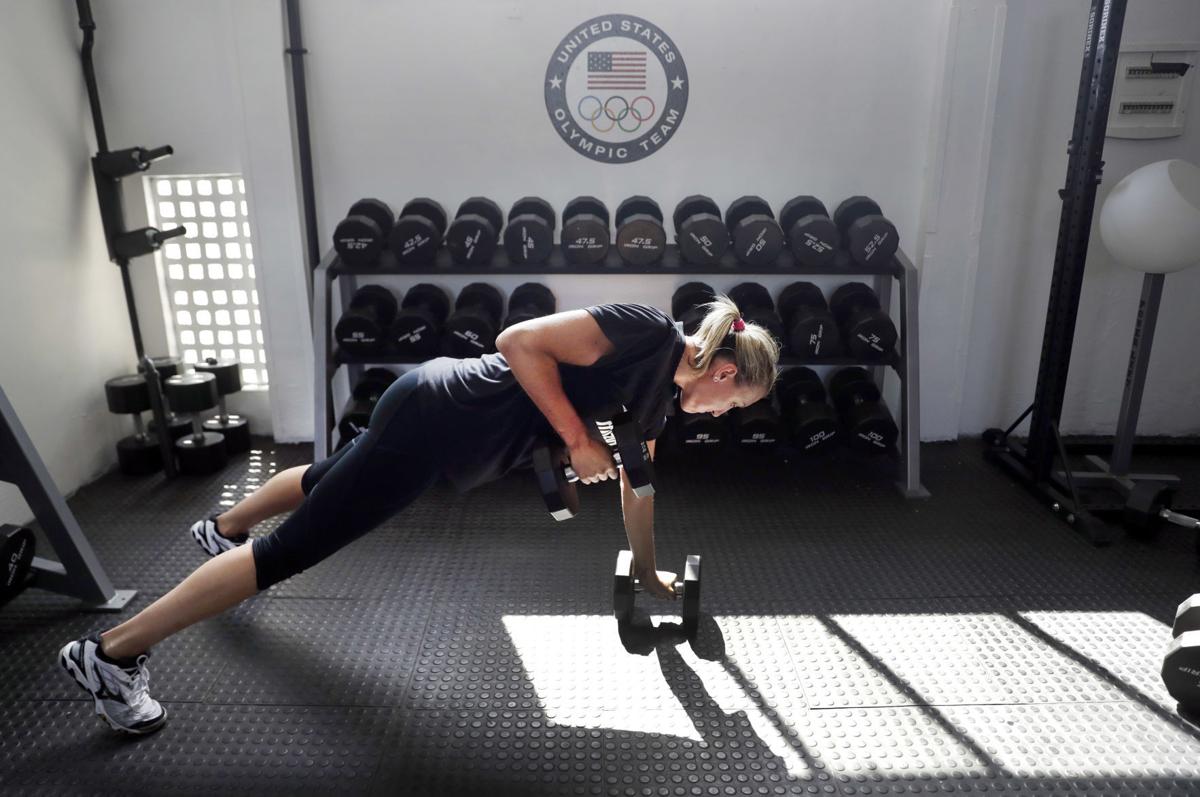 Ex-Husker Jordan Larson works out in the weight room after taking part in a United States' volleyball practice session at the Navy School High Performance Training Center before the start of the 2016 Summer Olympics in Rio de Janeiro on Thursday.

It wouldn’t be right to say that the Nebraska volleyball program is the only reason we got here, where a remarkable 25 percent of the 12-player roster for the United States Olympic women’s volleyball team came from the Husker program.

Jordan Larson, Kayla Banwarth and Kelsey Robinson played a lot of volleyball before they got to Lincoln, and they’ve played a lot since. They had club coaches and high school coaches who helped them improve and grow a passion for the game they needed to be great. Since leaving Nebraska, they’ve had national and professional teammates who have done the same thing.

And putting an inflated value on Nebraska’s part in their path to the Olympics would be a discredit to all the hard work each of the athletes has done on their own.

Still, all three say you can’t tell their Olympic story without the chapters about what the Nebraska program and coach John Cook did for them.

“Honestly, it’s the most crucial decision I ever made in my path to going to the Olympics,” said Robinson, who played her only season at Nebraska in 2013 after transferring from Tennessee. “I can’t say that I would have had the same opportunity if I had chosen a different school or chosen to stay (at Tennessee). Coach Cook is the one who reached out to (U.S. coach Karch Kiraly) and got me the tryout. Karch even told me he had no idea who I was until Coach Cook brought me up, so I owe my entire career to that."

Banwarth is from Dubuque, Iowa, and spent five years with the national team before getting a chance to play in the Olympics. She didn’t get much recognition outside of Nebraska during college, but now is the only libero on the U.S. roster.

Larson, who is considered one of the best outside hitters in the world, is the only one of the three who is from Nebraska, growing up in the small town of Hooper.

“When I first came into the (Nebraska) program it was like, ‘Hey, what are your goals? What do you see for yourself?’” Larson said. “At that moment I was like, ‘I want to play in the Olympics.’ I felt like (Cook) did a good job of preparing me not only for college and that life, but if I wanted to have a long career, investing in that longevity.”

Three Olympians coming from the Nebraska program is a reflection of Cook’s approach, Larson said. She said the trips that the team makes to China every four years exposes the players to what playing professional and international volleyball is like. After that, the players have a better understanding of how mentally and physically tough you must be to make it.

Banwarth said her Nebraska career had a large impact on her becoming an Olympian.

“I grew up in college, basically,” she said. “I learned responsibility and discipline and hard work. Basically I learned about the kind of person and athlete I wanted to be, and a lot of that is thanks to Coach Cook giving me the opportunity.”

Having three players on the Olympic volleyball team from the same college is rare. Hawaii’s three alums for the 2008 Summer Games were the last to do so.

During the 2012 Olympics, Long Beach State, Washington, Stanford and Penn State each had two players on the roster.

Because of the tradition of the Husker program, Banwarth says it’s not a shock to her that Nebraska has three players on the team.

“I guess I expect for Nebraska to have that big of an impact on international volleyball,” she said.

Robinson and Banwarth are each in their first Olympics, and Larson her second. But after the 2012 London Games, when the USA earned a silver medal, Larson did not know if she would want to be on the team again in 2016.

“I thought after London I would be done, and here I am,” Larson said. “I actually feel the best I’ve ever felt physically, mentally, just in life.”

The 2012 Olympics were a hard time for Larson, she said.

“I was a young person on the team learning and it was all new to me,” she said. “There were some hard times. Our team was really good, so it kind of overshadowed some things. It was tough on me. But I feel like we made some nice adjustments as a team, and that made me more inclined to want to be a part of it after.”

After the last Olympics, Kiraly took over as head coach when Hugh McCutcheon left to coach Minnesota. Larson liked the direction Kiraly wanted to go with the team, and it paid off with a gold medal at the 2014 World Championships, the program’s first championship in one of the three major world tournaments.

“The one thing about Karch is not only was he a good player and a good coach, he’s just a good person,” Larson said. “He wants the best for everyone in his program and that made me excited to be a part of something like that. He knows how to win, and he knows the way to do it, so that’s what I was most excited for.”

Larson, 29, will continue her career after the Olympics. She's signed a two-year contract to remain with her professional team in Turkey, where she plays in the winter and spring. She hasn’t made a decision on how long she’ll continue to play with the national team.

For this Olympics, the U.S. is ranked No. 1 in the world and will try to win gold for the first time. The Americans will probably have to beat second-ranked Brazil at home to do so.

It was actually a qualifying tournament played in Lincoln in January when the U.S. clinched its spot in the 12-team Olympic field.

Banwarth says her experience at Nebraska helped her get to this point, and will still be felt in Rio de Janeiro.

“I represent Husker Nation, and I hope that they know that, and they feel like they’re a part of my journey with me,” she said.

Another great day for favorites in Major League Baseball

Another great day for favorites in Major League Baseball

Get full coverage of the Winter Games.

A fourth former Nebraska volleyball player will be in the Olympics, as Sarah Pavan will represent Canada in beach volleyball.

Maggie Malone: From Geneva to Rio, on the trip of her life

Burroughs changing at home but not on the mat

Kids, you want to be an Olympic champion? The best in the world?

Rio-bound: Ex-Huskers competing in the Olympics

Nebraska will be well-represented at the Olympics in Rio de Janeiro, with nine former Huskers set to compete:

Sarah Pavan set a goal to be an Olympian when she was 5 years old, and throughout her athletic career it has always remained the event she str…

Nebraska is the No. 1 ranked college volleyball team in the country to begin the season.

Ex-Husker Jordan Larson works out in the weight room after taking part in a United States' volleyball practice session at the Navy School High Performance Training Center before the start of the 2016 Summer Olympics in Rio de Janeiro on Thursday.