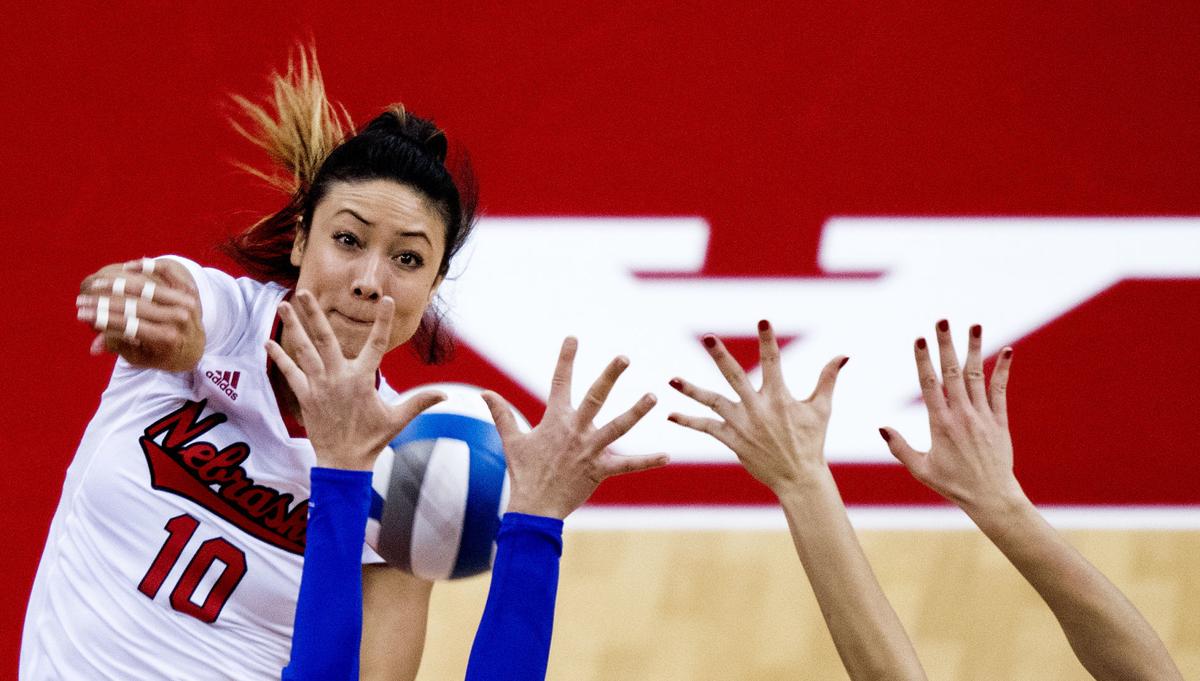 Nebraska’s Lexi Sun (10) tries to get a kill in the first set against Hofstra on Friday during the first round of the NCAA volleyball tournament at the Devaney Sports Center. 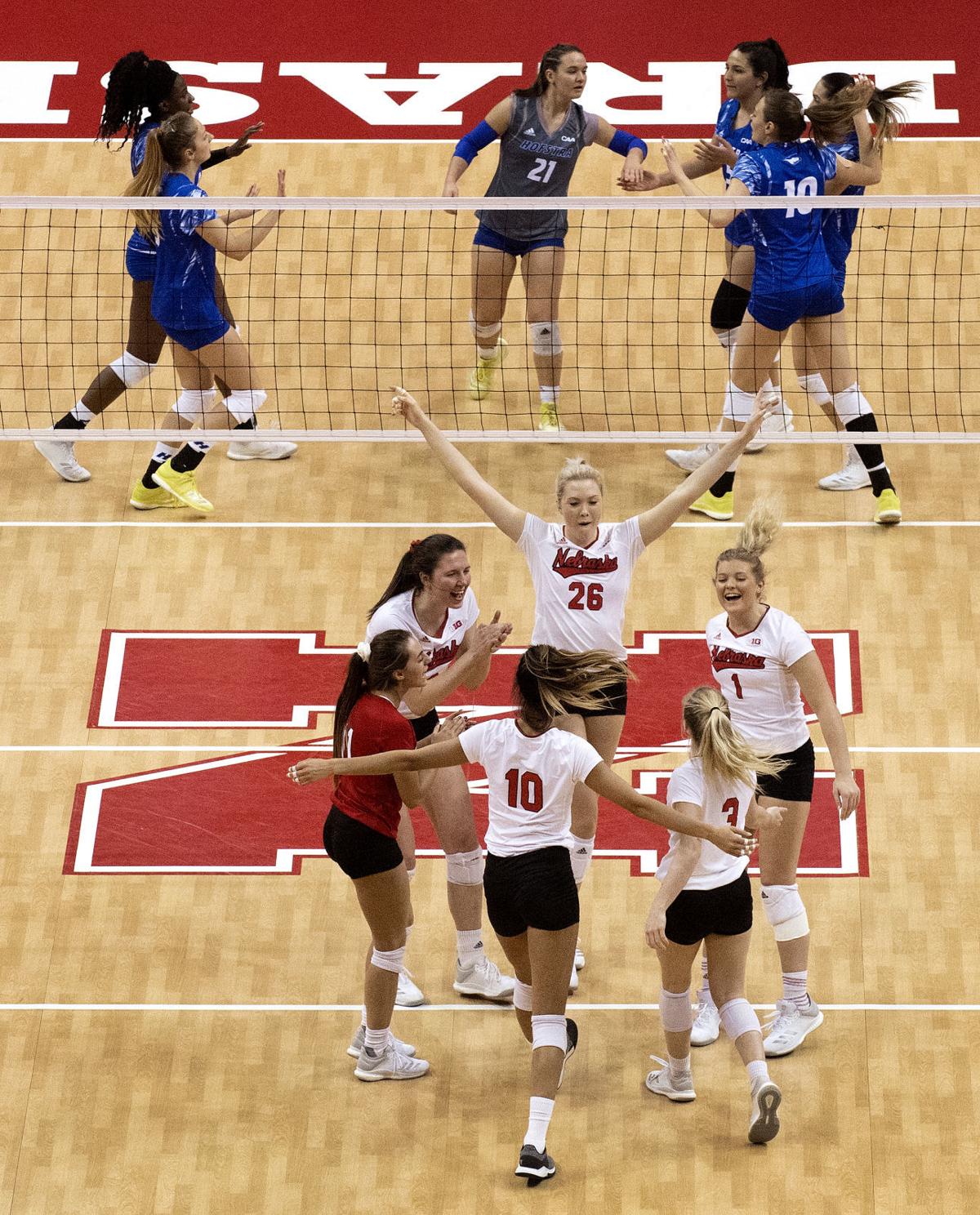 Nebraska celebrates a point scored against the Hofstra Pride in the second set on Friday during the NCAA volleyball first round at Devaney Sports Center.

It took some time for the Nebraska volleyball team to find a rhythm in Friday's NCAA first-round match against Hofstra at the Devaney Sports Center.

That included Mikaela Foecke. The 6-foot-3 senior outside hitter didn't record a kill until midway through the second set, and yet finished with an impressive stat line: nine kills on 22 swings, six blocks and two service aces.

Foecke sealed the Huskers' sweep with a back-row kill.

"Mikaela started off a little slow tonight but she got it rolling," NU coach John Cook said. "It took us awhile. Hofstra sets a lot of balls behind the setter and their right-side hitter (Aisha Skinner) started off on fire tonight and just the tempo and everything was way slower than what we're used to and Mikaela was early. Once she made that adjustment … she started blocking her."

Foecke has been a steady force for the Huskers for four seasons, but she seems to take it up a notch during the postseason. It showed again Friday when the two-time Final Four MVP accounted for seven of the Huskers' 17 kills in the third set.

"Typical Mikaela, turning up the heat as the match went on," Cook said.

Cook said he could tell the group was a little nervous.

"There's a different feel when you get to the tournament," he said. "But I thought they really worked through it."

Hames finished with 30 set assists, while Schwarzenbach had three kills and four blocks.

"It's good to get this first one out of the way," Cook added. "It's just like the very first week (of the regular season) we played Florida. Everybody was really nervous and we were just out of it, and the next day we come back and play great. I just think you get it out of the way and now we can go on and focus on playing a great match tomorrow. Get those nerves out."

Sunny debut: Sophomore outside hitter hitter Lexi Sun made her NCAA Tournament debut as a Husker, and she came out swinging. The Texas transfer had five first-set kills, and finished with nine for the match.

"I think it's more for everybody to kind of get going and for us to use all of our hitters and all of our weapons so the blockers don't really know where we're going," Sun said. "It's important for everyone to get going the first game and keep their block guessing."

Missouri coach knows Lincoln: Wayne Kreklow has been to Lincoln numerous times, guiding Missouri in several matches at the NU Coliseum when the Huskers and Tigers were in the Big 12.

On Saturday, Nebraska and Missouri will be meeting for the first time since NU left for the Big Ten in 2011.

"It was kind of a bittersweet draw," Kreklow said of the Tigers coming to Lincoln. "It was cool to come back here again because it's been a long time, but you've got to play them probably, too."

Are these Huskers similar to the NU teams Kreklow faced in the Big 12?

A basketball and volleyball guy: Kreklow has a very intriguing bio.

He was a standout basketball player at Drake before winning an NBA championship ring with the Boston Celtics in 1980-81.

So how did he get involved with volleyball?

The short story: Kreklow played high school volleyball in Wisconsin and when he wasn't playing basketball at Drake, he was playing for club teams on campus.

Kreklow later coached basketball at Central Decatur High School in Iowa in the late 1980s before going to Missouri to work on his master's degree. It was there when Kreklow joined Missouri as grad assistant in 1990, meeting his wife, Susan, along the way.

"I've been there ever since," Kreklow said.

Susan Kreklow was Missouri's head coach from 2000-04. The Kreklows switched job titles in 2005 and Wayne has been leading the Tiger program since then.

Photos: Huskers roll against Hofstra in defense of national title

The Huskers started their run at another final four appearance on Friday night with a sweep of Hofstra. Journal Star photos by Francis Gardler

Photos: Missouri advances to the second round of the NCAA tournament with sweep of Arizona

Missouri swept Arizona to advance to the second round of the NCAA volleyball tournament on Friday night. The Tigers will take on Nebraska Satu…

A look at how the rest of the NCAA volleyball tournament unfolded on Friday.

'Tell me the last player that did that:' Foecke dazzles in her final match at Devaney, NU moving on to Sweet 16

For many fans in the standing-room only crowd of 8,382 on Saturday at the Devaney Sports Center, it was the final time they’ll watch Mikaela F…

Jazz Sweet was hammering kills into open spaces. She was driving kills to the back row. She was aggressive.

Nebraska’s Lexi Sun (10) tries to get a kill in the first set against Hofstra on Friday during the first round of the NCAA volleyball tournament at the Devaney Sports Center.

Nebraska celebrates a point scored against the Hofstra Pride in the second set on Friday during the NCAA volleyball first round at Devaney Sports Center.