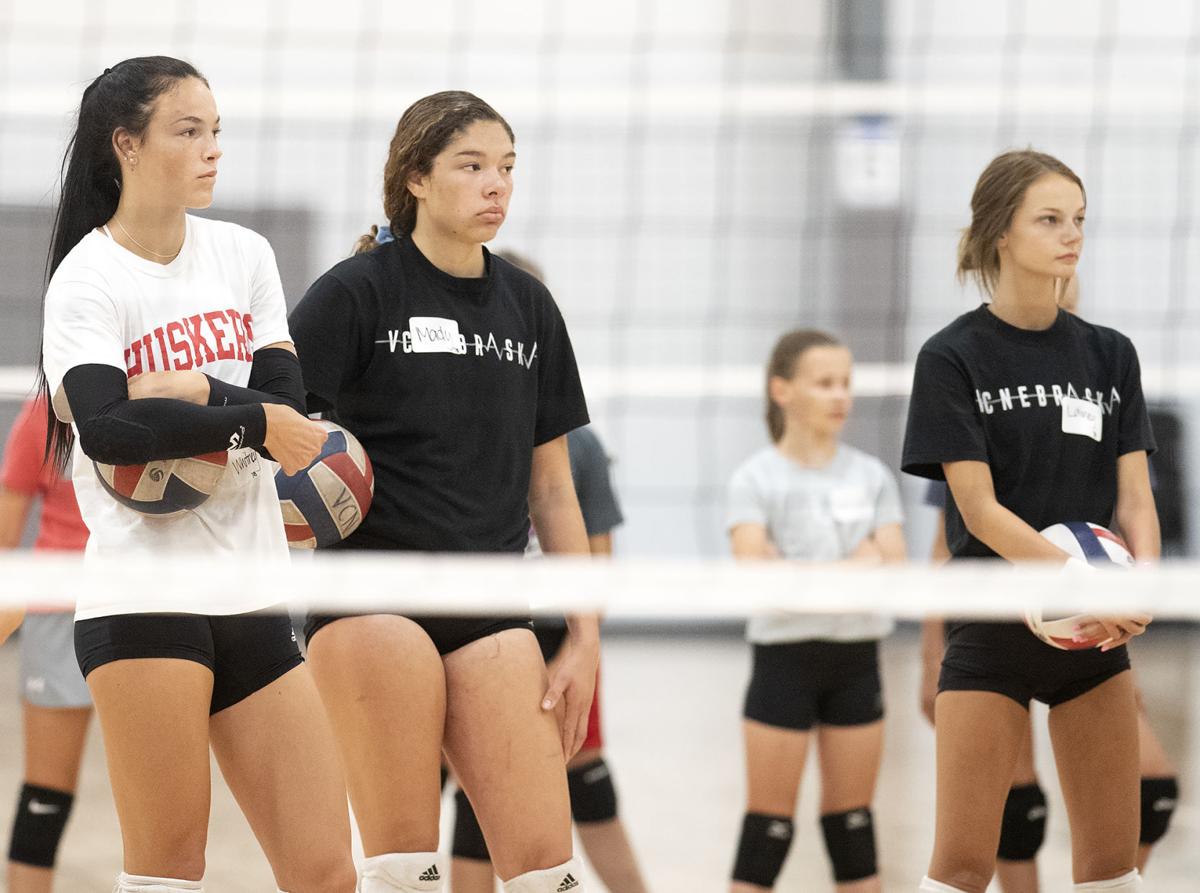 Waverly's Whitney Lauenstein (left) listens to coaching during a Jordan Larson volleyball camp hosted by Volleyball Club Nebraska in July at Kinetic Sports Complex. Lauenstein is a top-20 volleyball recruit and the second VCN player to earn a scholarship to Nebraska. 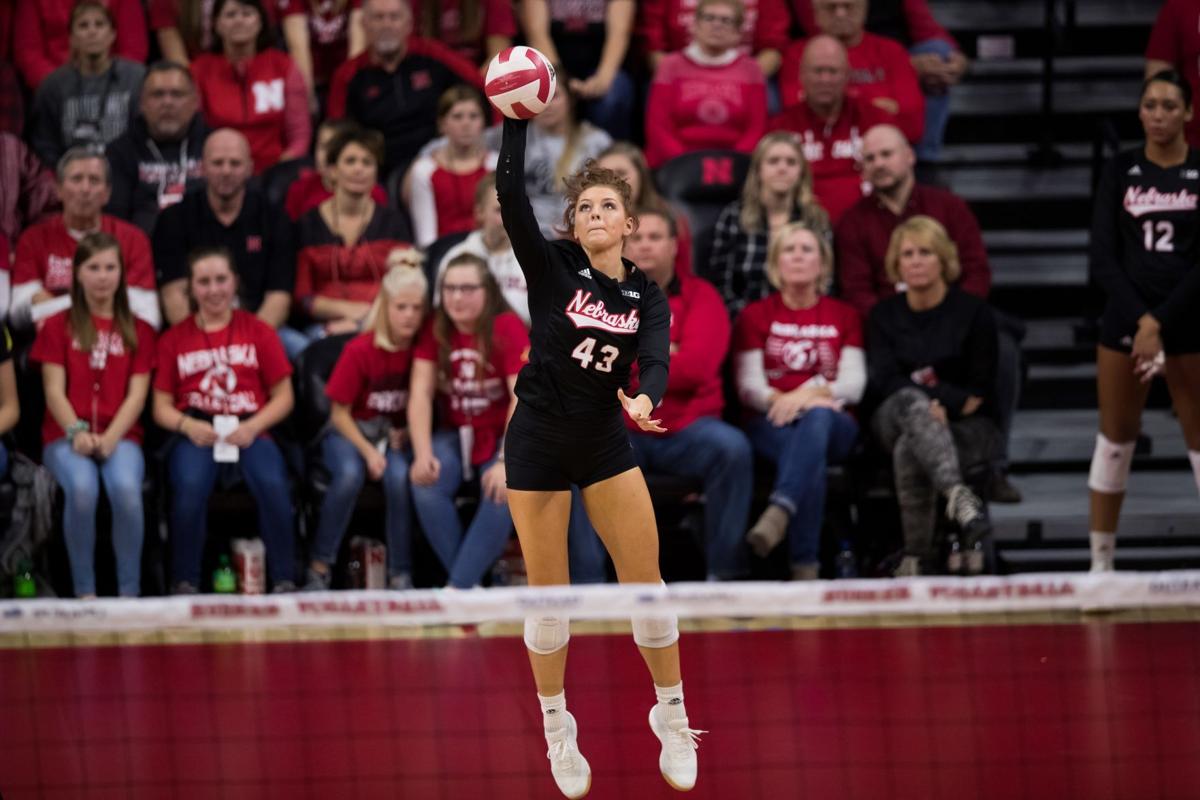 Hayley Densberger serves during a match at the Devaney Sports Center during the 2019 season. Densberger was the first VCN player to attend a Division I volleyball program.

Like most startups, Maggie Griffin’s club volleyball program wasn’t much when she started Volleyball Club Nebraska from scratch about 10 years ago.

Griffin, a setter on the Nebraska volleyball team from 2005 to ’07, stood on the steps of the NU Coliseum before Nebraska matches handing out flyers. They had four teams and 36 youth players in the first year in 2011.

“We practiced at Lincoln Christian with the nets that you have to put weight bags on, and the middle of the net sagged. I’m not exaggerating,” Griffin said.

Over the past 10 years, the program has grown in big ways. VCN will have about 60 teams this year. Through its traveling club teams, local leagues, satellite summer camps and private and group lessons, VCN serves about 1,800 kids a year.

Griffin is one of three full-time employees, and there are about 100 coaches. And this year VCN moved into a new shared sports facility, Kinetic Sports Complex, of which Griffin is part of the ownership group. The facility can have 12 volleyball courts.

That growth includes reaching the point where VCN is developing players good enough to play for the powerhouse Nebraska program located just 3 miles from the VCN gym on West O Street.

National Signing Day for college volleyball is Wednesday, and VCN player Whitney Lauenstein from Waverly will sign with the Huskers. Lauenstein improved a lot over the past few years, earned an offer from Nebraska and is the 16th-ranked recruit nationally in the senior class.

Lauenstein signing with the Huskers is part of a stretch when a VCN player will join the Huskers as a scholarship player or walk-on in four straight years. Next year, Bekka Allick from Waverly will sign with the Huskers. She’s a top-10 national recruit.

It will be special for Griffin to see Allick join the Huskers because she’s grown up with the program.

“She came here when she was 10,” Griffin said. “She’s learned every skill and she’s developed the mind, the physical part, everything. So I feel like she has the most accurate reflection of a full career here. It’s been fun to see her grow.”

At the beginning of VCN they didn’t have upperclassmen, so sending players to college is relatively new. Densberger was the first VCN player to go to an NCAA Division I program, marking a milestone for the program in its sixth year.

Griffin feels good that VCN has reached a point that it helps players excel enough that they can be recruited by Nebraska, but she’s also passionate about helping players reach Division II and Division III.

“Obviously I have a great relationship with (Nebraska coach John Cook) and he likes to pick my brain about kids, and where they might fit,” Griffin said. “And I think he knows that kids that play here are what he wants because they work hard and they’re committed to the sport and they’re not scared of challenges and they’re mentally tough. Because we do try to prepare them for college. We try to put them through the wringer and make it so when they get to college it feels like an easy transition.

“A lot of kids dream about playing at Nebraska, so for them to be able to find a home there, I think that’s awesome. But a lot of kids want to go far away from home. They want to travel. Like (Elle Glock from Wahoo) wanted to go to California and see what else is out there.”

VCN alums have also gone on to play at Illinois (Kyla Swanson from Wahoo), Creighton (Jaela Zimmerman from Malcolm) and Drake (Alex Lemke from Lincoln East).

There are 13 seniors from the club this year committed to college programs, from Division I to NAIA.

“The cool thing is — and I try to tell the kids this every year — there are so many opportunities for college volleyball,” Griffin said. “There are schools that I’ve never even heard of. Like Corinne Boyd (from Lincoln Southwest) is at Denison University (Ohio), which I’d never heard of Denison University.

“Her goal was to play collegiately and she worked really hard and she found an opportunity. A lot of kids come to us and they’re like, ‘I don’t know, can I play in college? Do you think that’s possible?’ And you can absolutely find a good fit. It not just about the D-I kids or Nebraska kids. It’s about finding the right fit for every kid.”

Our favorite photos from this year's state volleyball tournament

High school seniors from these Lincoln club volleyball teams are scheduled to sign with NCAA Division I volleyball programs on Wednesday:

Being smack dab in the middle of the country gives Lincoln an appeal like few other cities have, and that advantage, combined with the right f…

Final Four for volleyball staying in Omaha for this season

The NCAA Tournament field will be reduced from 64 teams to 48, with 32 automatic qualifiers and 16 at-large selections.

“It’s different from home, but at the same time it’s the same. Like a small community,” the defensive specialist from Hawaii said of Lincoln.

In addition to landing the 2022 Final Four, Omaha was also supposed to have held the 2020 event, which was canceled by COVID-19's impact.

Hayden Kubik marks the Huskers' second top-ranked player in the past two weeks. Plus, a city standout is on the move to Waverly.

With the No. 1, No. 2 and No. 3 recruits in the PrepVolleyball.com national rankings, the class is considered one of the best recruiting classes regardless of sport.

'I absolutely loved it:' A visit to Montana State's campus seals commitment for Wahoo's Larson

Over the last four seasons, Wahoo has made itself a dynasty in Class C-1. Now one of the program's leaders has a home for her college career.

Waverly's Whitney Lauenstein (left) listens to coaching during a Jordan Larson volleyball camp hosted by Volleyball Club Nebraska in July at Kinetic Sports Complex. Lauenstein is a top-20 volleyball recruit and the second VCN player to earn a scholarship to Nebraska.

Hayley Densberger serves during a match at the Devaney Sports Center during the 2019 season. Densberger was the first VCN player to attend a Division I volleyball program.