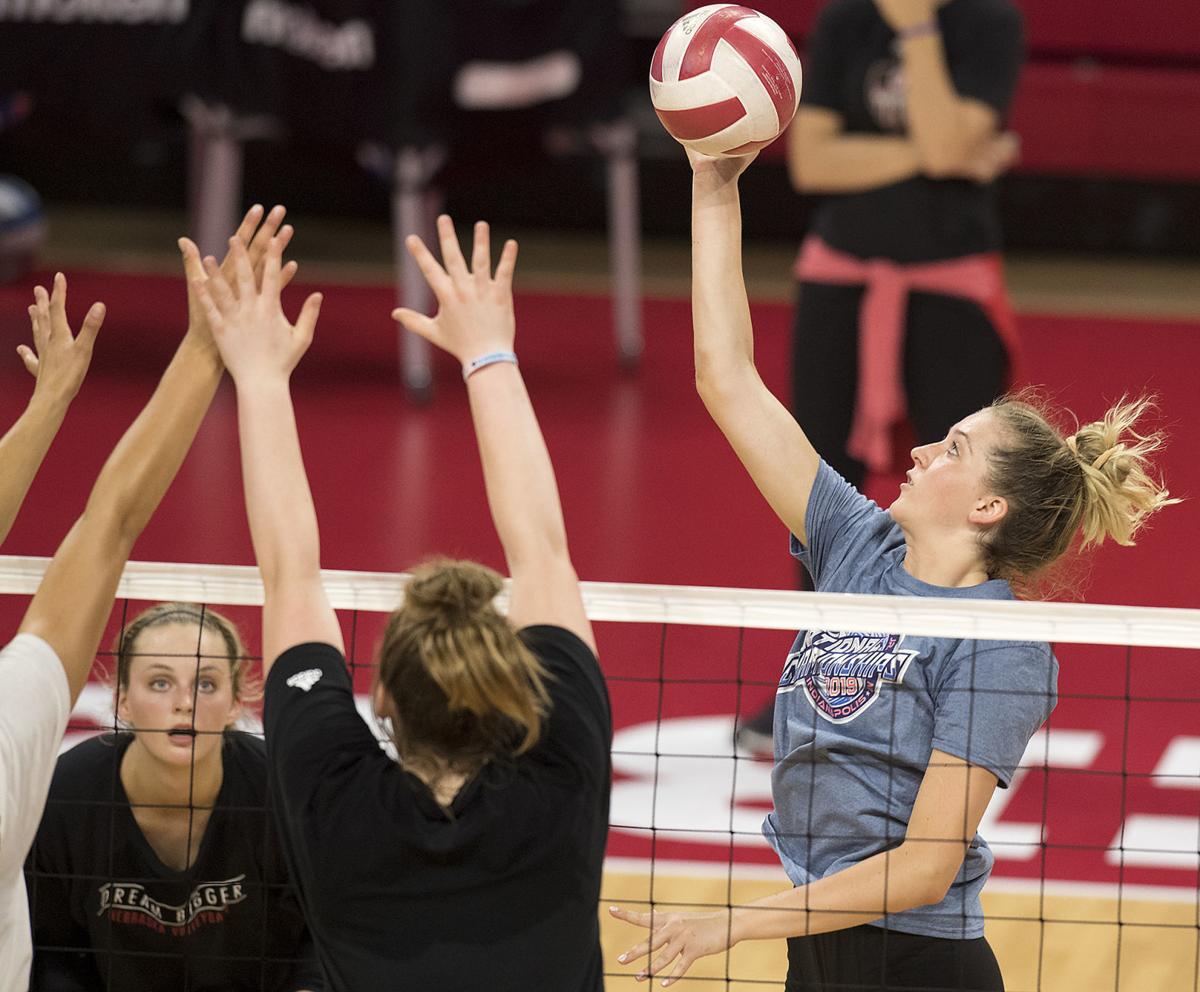 High school volleyball player Hayden Kubik takes part in a scrimmage at a Husker volleyball camp in 2019 at the Devaney Sports Center. This week Kubik committed to play at Nebraska. 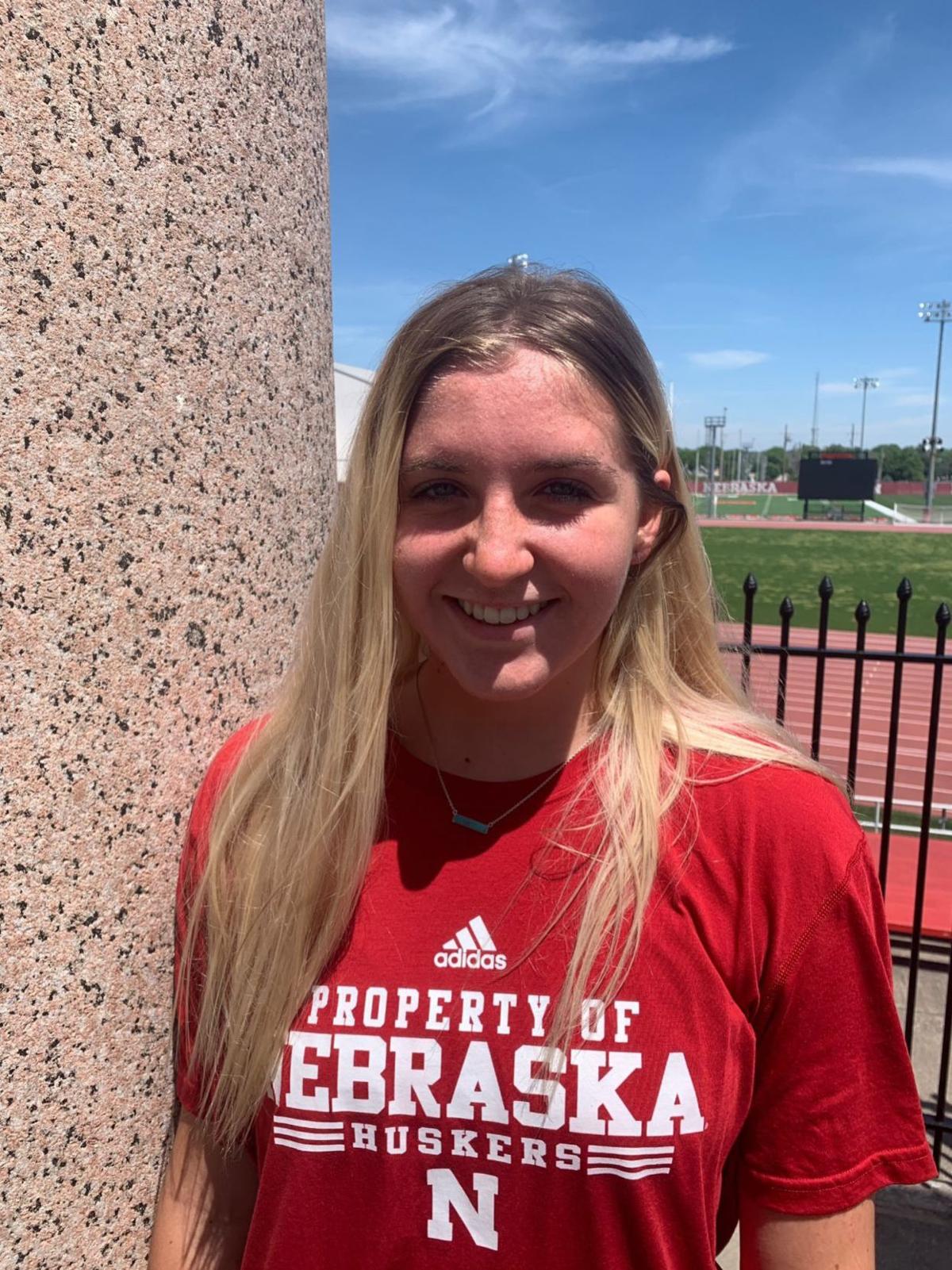 When Hayden Kubik was in Lincoln a few weeks ago to help her older sister, Nebraska volleyball player Madi Kubik, move into her apartment, Hayden posed for a photo.

The photo is of Hayden on the UNL campus, next to the columns near Memorial Stadium, with the track in the background. Hayden is wearing a Nebraska T-shirt.

It’s one of those photos that many high school athletes use when they announce on social media what college they’re going to.

“We took the pictures, just in case,” Hayden Kubik said. “We were like, ‘If they do offer me, let’s just have some good pictures that were well thought out.’”

It’s a few weeks later now, and that photo has indeed been put to good use because Kubik announced Wednesday that she’s committed to play volleyball at Nebraska. She’ll be a high school junior this year at Valley High School in West Des Moines, Iowa.

That means Hayden should get to be on the team for one season with Madi. After a slow start to her freshman season, Madi Kubik came on during the second half, so much so that she was named the Big Ten Conference freshman of the year and the national freshman of the year by PrepVolleyball.com.

Hayden Kubik is a hard-hitting, 6-foot-2 outside hitter. She’s the No. 1-ranked recruit in her state in the 2022 class, according to PrepDig.com.

The Nebraska coaches made Kubik a priority in the 2022 class. Under the new recruiting rules that began last year, college coaches can't contact players until June 15 after their sophomore year.

Nebraska didn't waste any time, with coach John Cook and assistant coaches Jaylen Reyes and Kelly Hunter having a conference call with Kubik early Monday. One of Kubik’s club coaches told her to expect the call.

“It was a late night, I do have to say that, but I wanted to play for Nebraska so bad that I would do whatever it takes to get to play there,” she said. “It was a really exciting phone call. I had a lot of nerves going into the call. It ended up being a really good call, and they offered me (a scholarship) the next day.”

Wisconsin also recruited Kubik on the first day they were able to. Kubik had also been recruited by Florida, but she had already decided she wanted to be closer to home so her family could attend more matches.

She told the Wisconsin coaches she planned to make a quick decision, and then she had it made on Tuesday evening.

Hayden said she couldn’t let where Madi was playing affect her decision too much, but she is excited that they’ll be on the team together for one season.

During the past year some of Madi’s teammates had been asking Hayden whether she’d also play at Nebraska.

“I think everyone deep down knew that I was going to pick Nebraska,” she said. “I think my family knew Nebraska and Wisconsin were definitely the two that I was really thinking about. It was a really hard decision, but when it comes down to it all, Nebraska is my home.”

Hayden had attended Nebraska’s Dream Team volleyball camps the previous two summers, where she impressed the Husker coaches. She was on the varsity team as a freshman when Madi was a senior. The team reached the state tournament semifinals.

“I told Madi that since we didn’t win a state championship in high school that I’d have to go to Nebraska and play with her there,” Hayden said.

And there are two more volleyball-playing Kubik sisters. Peyton is 11 years old, and Jensen is 10.

College volleyball is a few years down the road for Peyton and Jensen, and maybe they won’t pursue that. Or maybe Hayden won’t be the last Kubik to commit to Nebraska.

“They play club at Ignit, where I play as well,” Kubik said. “And they are rising stars as well, so you better keep an eye out for them, too, because they’re going to be good.”

Q&A with John Cook: Why it's important to be back as a team, what happens if a player gets the virus and more

All 16 players — including five new faces — are currently in Lincoln. John Cook can't coach his team right now, but he can talk about them.

John Cook met Nicole Drewnick when she was a kid, and years later she came to play for him at Nebraska

John Cook knew Nicole Drewnick when she was about 6-years-old, long before he began recruiting her a few years ago, or when she joined the Nebraska volleyball team prior to the 2019 season.

Weights and COVID-19-cleared wristbands, an inside look at the Nebraska volleyball team's return to work

Nebraska volleyball player Hayley Densberger shares details of the process the players go through each day to be cleared to workout.

Husker Takeout: Frost, Hoiberg to give back; Huskers lose a LB; and more nuggets from Thursday

Q&A with John Cook: Nebraska volleyball recruiting is strong despite missed opportunities due to COVID-19

Volleyball recruiting has been impacted, but Nebraska is still sitting good with eight players already committed for the next two recruiting classes.

'We’re not taking for granted the times that we can get in the gym': Seniors trying to keep NU volleyball team on track

Four seniors with plenty of national title experience are trying to make sure the pandemic doesn't disrupt the path to a special season.

High school volleyball player Hayden Kubik takes part in a scrimmage at a Husker volleyball camp in 2019 at the Devaney Sports Center. This week Kubik committed to play at Nebraska.