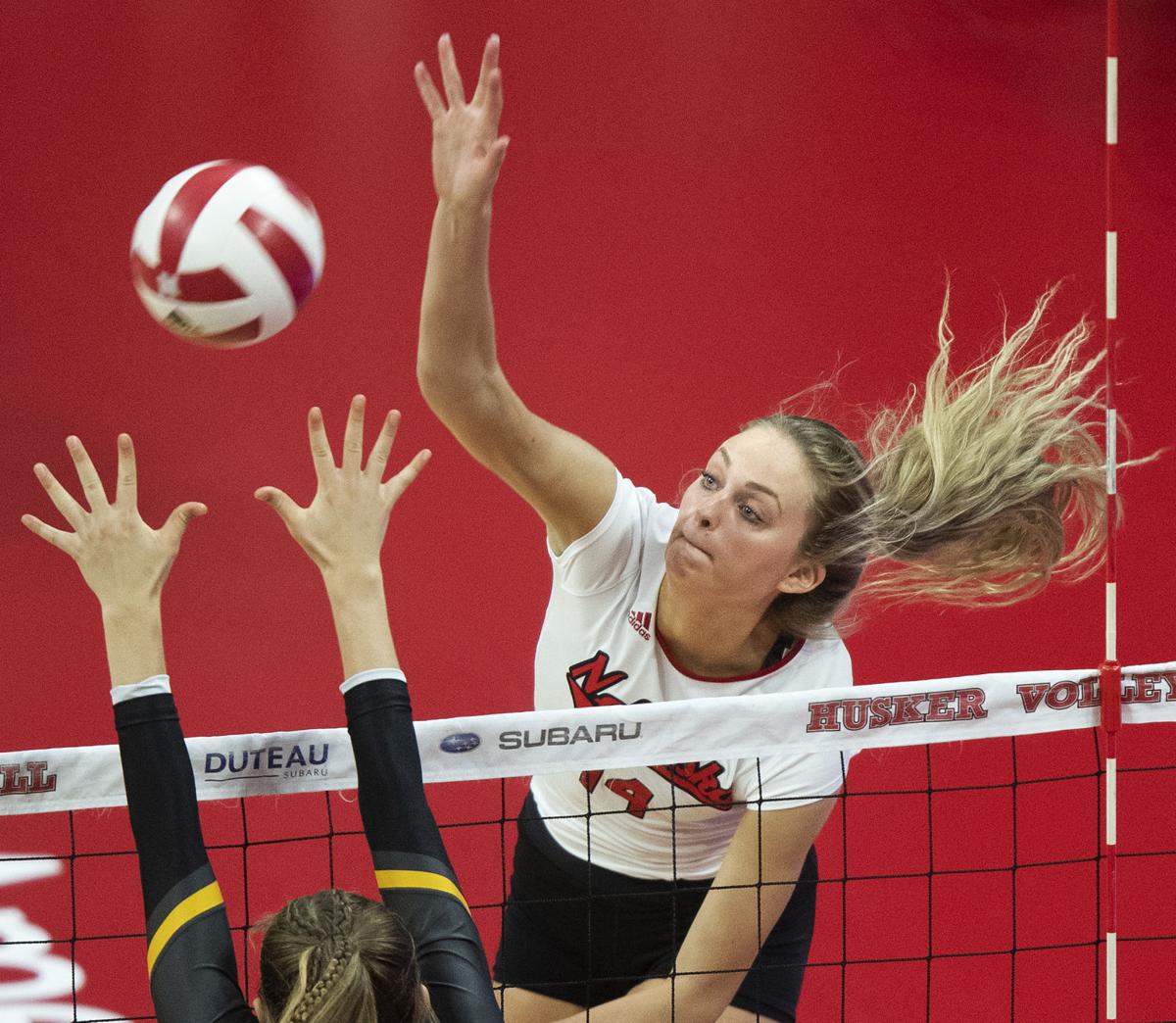 Nebraska’s Ally Batenhorst (14) attempts a kill in the first set against Iowa on Saturday at the Devaney Sports Center. 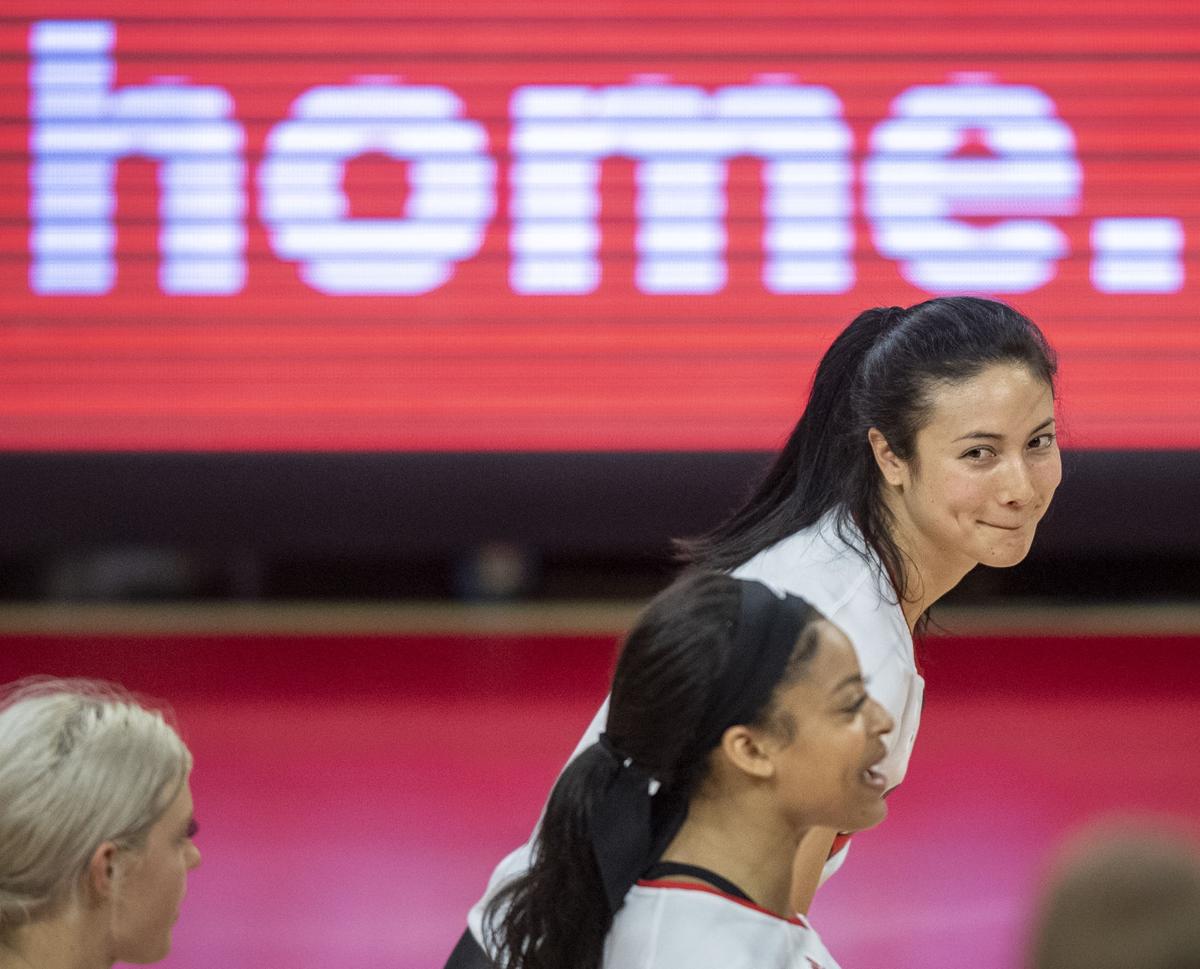 Nebraska’s Lexi Sun (top) and Kayla Caffey (bottom) prepare for a point as Sun makes an appearance in the third set against Iowa on Saturday at the Devaney Sports Center. 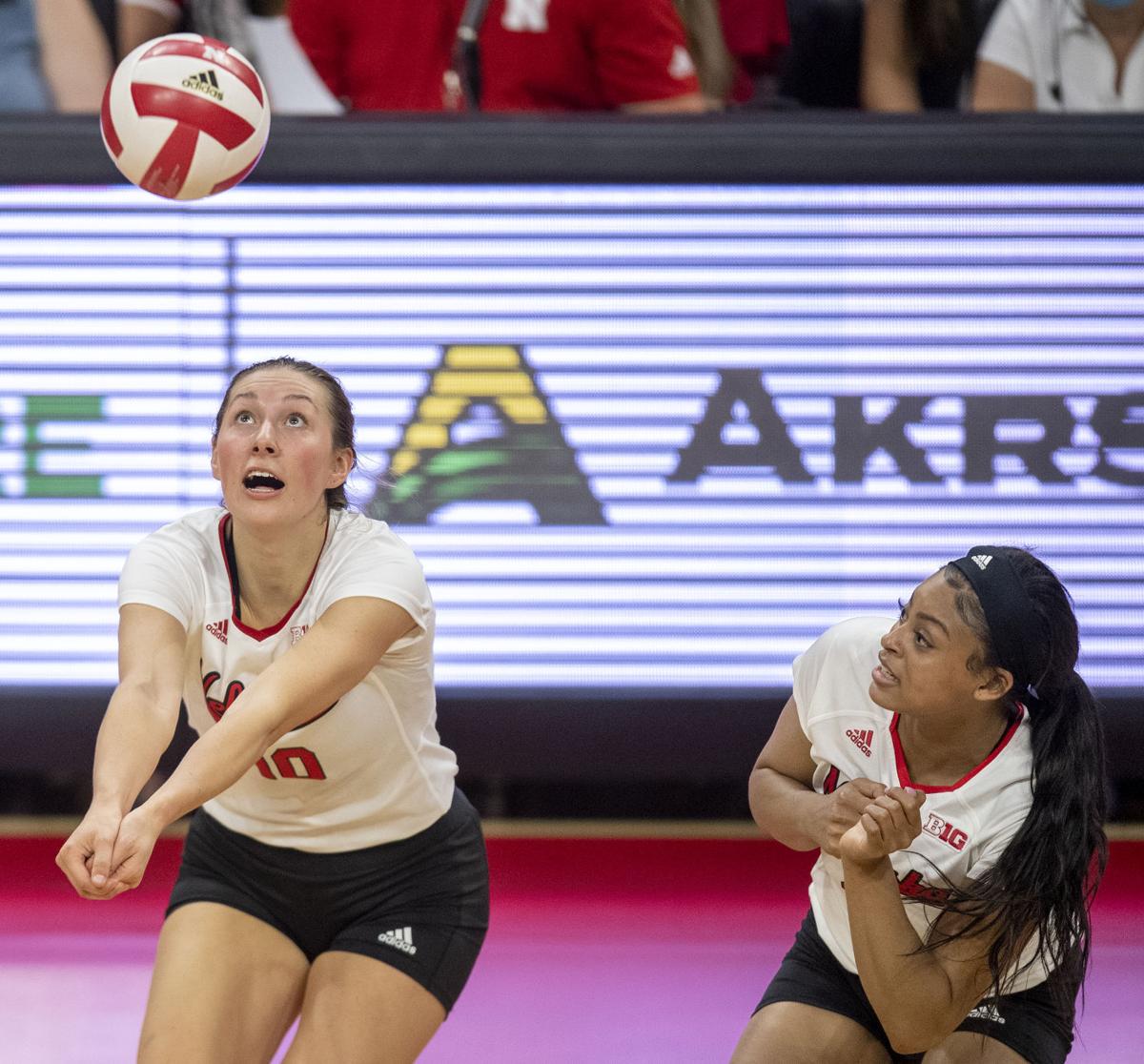 Nebraska’s Madi Kubik (left) passes the ball in front of teammate Kayla Caffey in the third set against Iowa on Saturday at the Devaney Sports Center.

The new starting lineup for the Nebraska volleyball team has won both of its matches together.

It still takes a whole squad — the Huskers used 13 players Saturday — but a group of regular starters appears to have formed a bond and found some rhythm that helped it win four close sets over two matches this week.

Entering the week on a three-match losing streak, Nebraska opened the Big Ten season with wins against Northwestern (3-1 on Wednesday) and Iowa to improve to 8-3 overall.

A week ago, John Cook decided after four weeks of matches that it was time to tighten up the rotation and let a group of starters play together for “a while.”

The most suspense in those decisions came at the hitter spots, where Cook chose three hitters from a group of five: Kubik and freshmen Ally Batenhorst (outside hitter) and Krause (right-side hitter).

The two players "left out" were outside hitter Lexi Sun and right-side hitter Whitney Lauenstein.

Why did Cook pick the three hitters he did?

“They have been the best in practice. We just feel like that’s been our best lineup,” Cook said.

That means — for now — Sun isn’t a starter, but she’s played in both matches off the bench.

Even though Sun’s season hitting percentage was just .174 when the decision was made, it was still shocking to some fans when a two-time All-American and four-year starter wasn't in the starting lineup.

“She (Sun) hasn’t been one of the best two outside hitters in practice,” Cook said. “She’s rebounding. She’s slowly turning it up, which is good to see. I know it’s hard coming off the bench. But I think she’s handled it really well the last two matches. I mean, she put on a block clinic at Northwestern. And tonight I don’t think she got one good set, but she got three kills, hit .375, managed it really well and was smart. That’s the experience that she has.”

In the third set, Sun came in for Batenhorst in a move that Cook says was planned leading into the match. Also, Kalynn Meyer played for Callie Schwarzenbach at middle blocker.

“I want to make sure we have people that are confident going in the matches because we’re going to have some back-to-back (matches) now coming up,” Cook said. “I just think we’re going to need some of that depth and fresh arms and fresh legs. I want to keep rotating some people in so we have options, which we didn’t last year.”

Cook’s message to Sun and Lauenstein is to keep using practice as an opportunity to compete for a spot.

“(The message) was the same to Whitney, as well, that this is what we’re going to go with, and you guys are competing every day and you got to try to earn your way back in the starting lineup,” Cook said.

Krause has had two strong matches hitting since the roster decision was made, hitting .500 in each match.

Krause felt like competing with Lauenstein for the spot helped her, but knowing where she stands now is also a good feeling.

“I think constantly being nervous, it kind of sucks a little bit,” Krause said. “But competition is always good.”

Cook thinks Krause is starting to get more comfortable playing right-side hitter after being an outside hitter in high school.

“We made the decision to put Lindsay in the lineup because she competes, she talks,” Cook said. “She does all of the things that typically freshman don’t do. And she’s a warrior. So we decided to go with her.”

What a move by @HamesNicklin to get the Set 2 win. 😤@Huskervball leads Iowa 2-0 in the 3rd! pic.twitter.com/z40sdUAqEe

The second set against Iowa was close, but Nebraska got three kills down the stretch from Krause and a setter dump by Nicklin Hames on set point to win 26-24. Nebraska also won a close third set to finish off the sweep, which for Cook was a sign of growth.

“I think our belief level is going up,” he said. “A couple of weeks ago we were losing those (sets).” 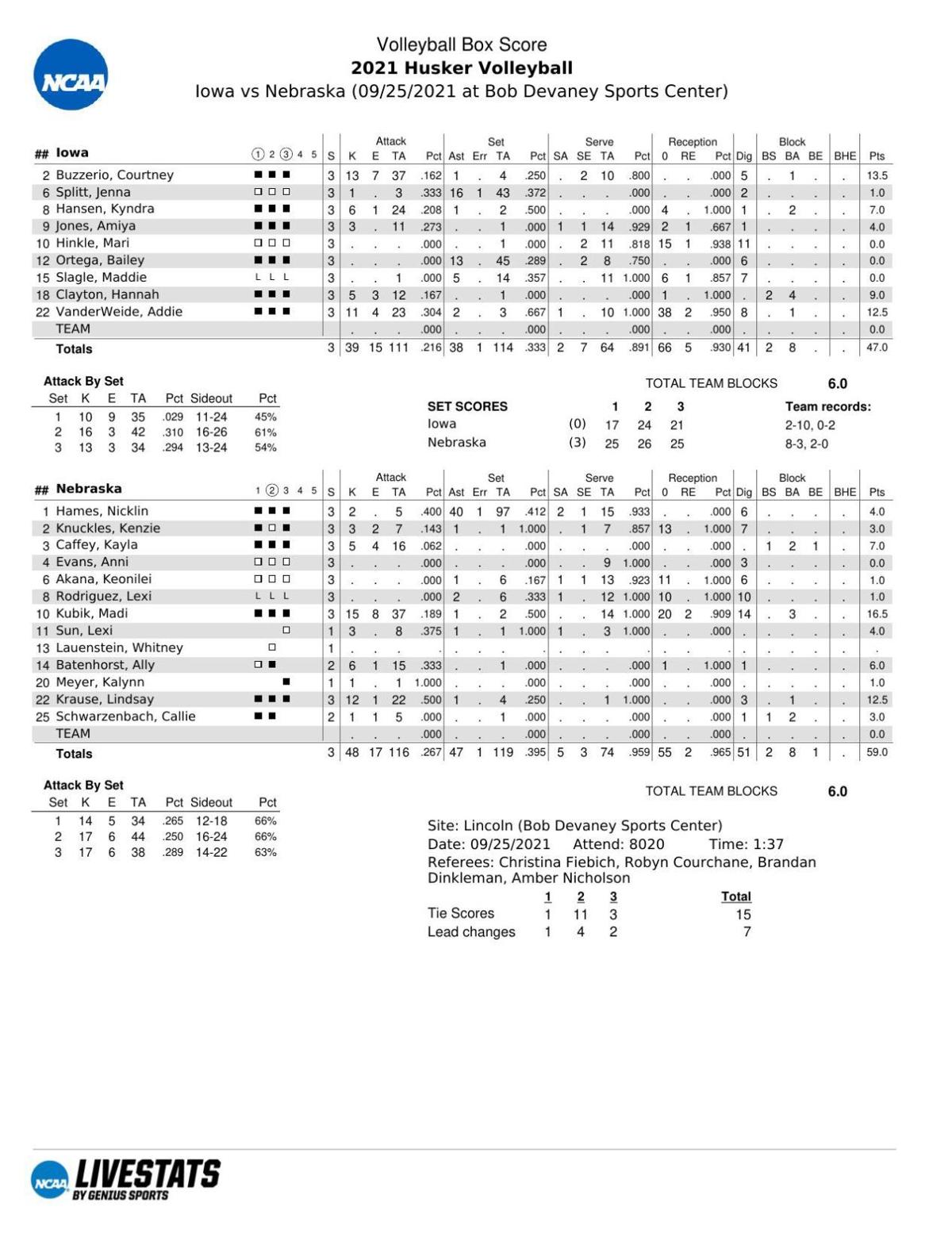 Nebraska players talked about holding each other accountable after a three-game losing streak in what Madi Kubik calls "a come to Jesus" moment.

John Cook on the radio: Kubik's special skill, and a player-led caring gesture for a former teammate

Hitting the ball off the hands of a blocker is a skill the Huskers have worked on, one Madi Kubik utilized this week.

Lauren Stivrins has started hitting during practice, and if she doesn’t have any setbacks, she may be inching closer to returning.

John Cook on the radio: Stivrins will be '105%' when she returns, and other Husker notes

For now, Lauren Stivrins is a practice-only player for the Nebraska volleyball team.

From top recruit to battling for a starting spot, Lindsay Krause riding the waves that come with college volleyball

The Omaha Skutt grad and recently named starter is still adjusting to the college game. "The blockers are so much better now," she says.

Jordan Larson was in the house, but this night belonged to Stivrins, whose return lifts NU past Michigan

Nebraska volleyball fans got double the fun Friday with the return of Stivrins and a Jordan Larson. The fun never stopped either.

Nebraska’s Ally Batenhorst (14) attempts a kill in the first set against Iowa on Saturday at the Devaney Sports Center.

Nebraska’s Lexi Sun (top) and Kayla Caffey (bottom) prepare for a point as Sun makes an appearance in the third set against Iowa on Saturday at the Devaney Sports Center.

Nebraska’s Madi Kubik (left) passes the ball in front of teammate Kayla Caffey in the third set against Iowa on Saturday at the Devaney Sports Center.