Jordan Larson was in the house, but this night belonged to Stivrins, whose return lifts NU past Michigan
0 Comments
Share this
1 of 3 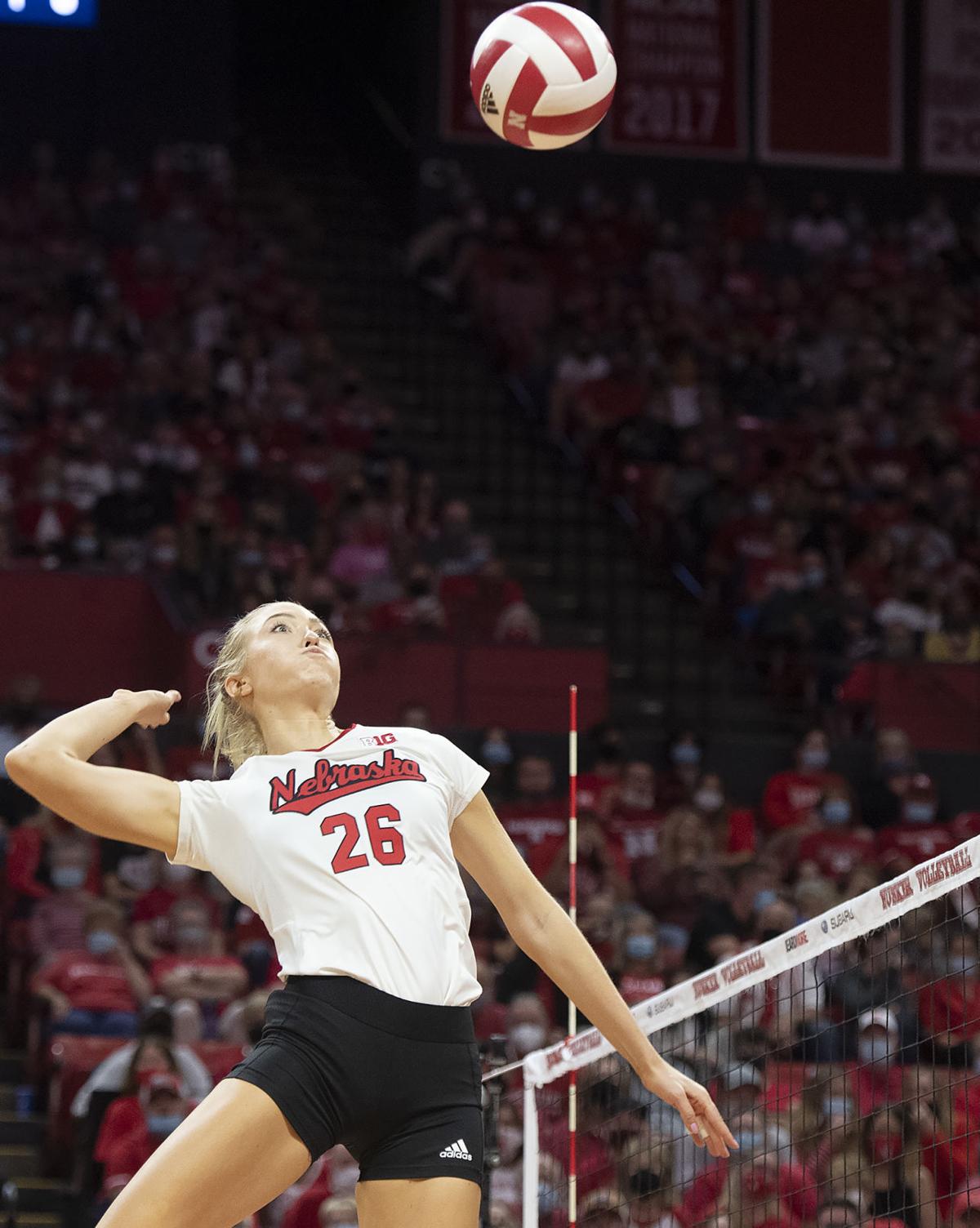 Nebraska's Lauren Stivrins (26) hits against Michigan in the second set Friday at the Devaney Sports Center. 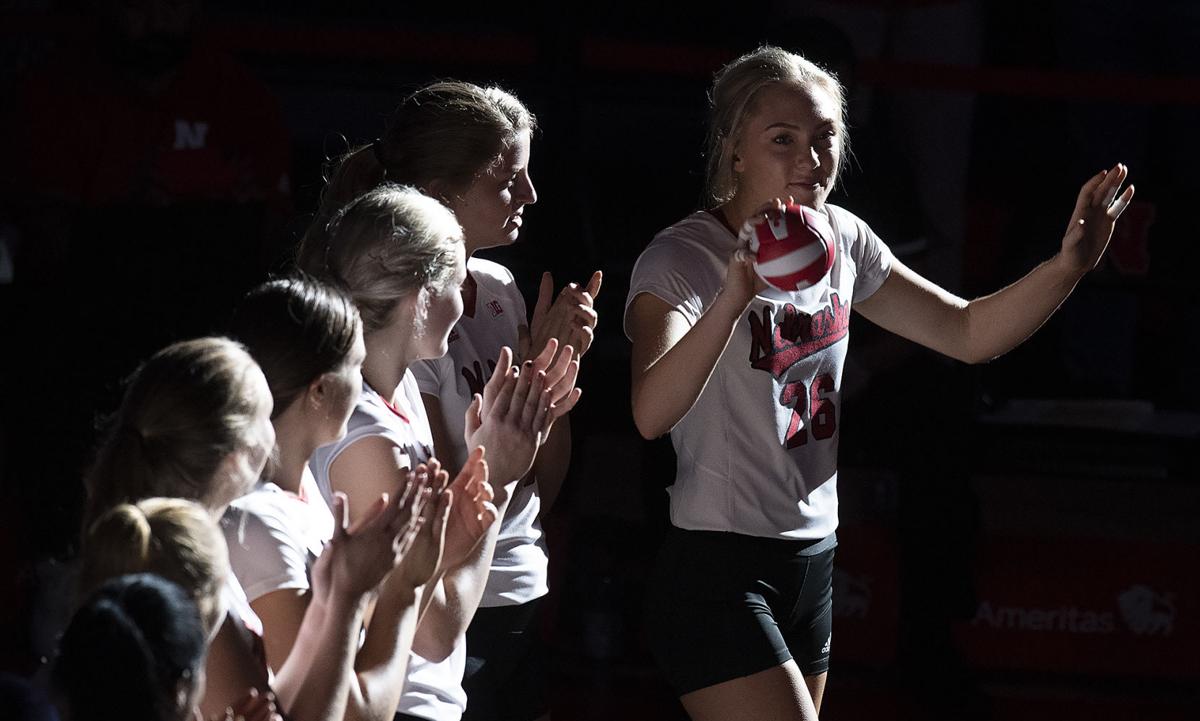 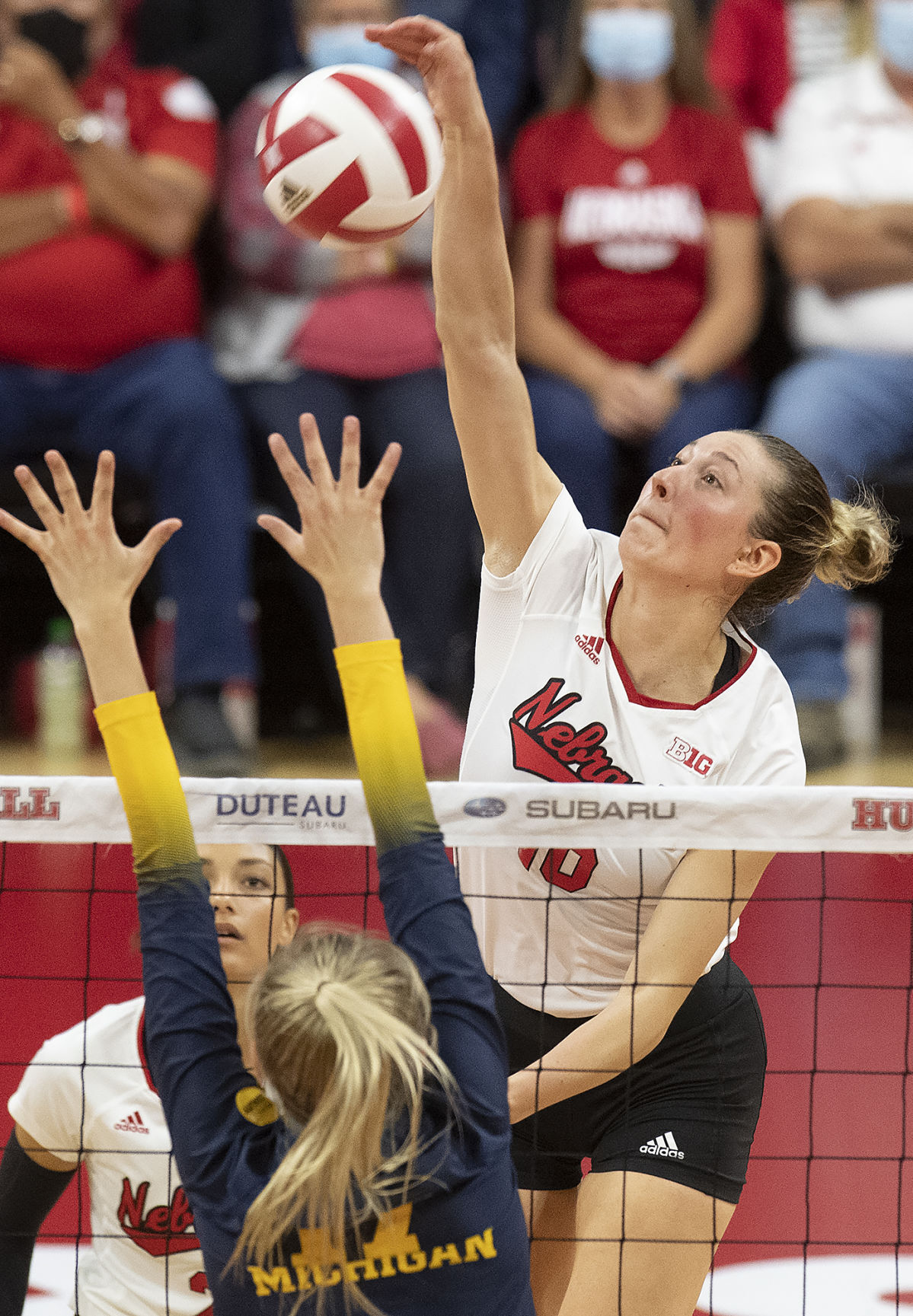 We’ll call it a tie.

Nebraska volleyball fans got double the fun Friday with the return of Stivrins to the court and a rousing tribute to honor Olympic gold medalist Jordan Larson (her nickname is "the Governor" because most places she travels in the world somebody knows her).

And the good times never stopped, with Stivrins giving her team an immediate lift as No. 12 Nebraska played its best match of the season to beat Michigan 25-14, 25-15, 25-13 at the Devaney Sports Center.

Stivrins, the sixth-year senior, All-America middle blocker from Arizona, missed the first 11 matches of the season after having back surgery.

Nebraska lost three matches in a row earlier this season, and its offense hasn’t been good. But in one night, Stivrins changed how you feel about the Huskers.

Nebraska only hit the ball out three times all match. Nebraska’s .462 hitting percentage was its best of the season, topping the previous high of .350.

Stivrins coming back began to spin into motion earlier this week when she wanted to start taking some sets from starting setter Nicklin Hames during practice. Everything was proceeding nicely, so Friday became the day.

Cook put Stivrins in the starting lineup. When she was introduced, you could feel the excitement from the crowd of 8,056.

“I don’t think I’ve ever heard Devaney as loud as it was when they announced her name,” Hames said. “I got goosebumps down my legs.”

Why does Cook think the crowd reacted the way it did?

“They know what she’s gone through,” Cook said. “I’m sure she had a lot of doubts if she could ever play again.”

Stivrins was impressive from the start, smashing a kill on a slide attack on her first hitting attempt early in the first set.

Stivrins finished with 11 kills on 15 attempts without a hitting error for a .733 hitting percentage. Her first seven attempts netted five kills.

Stivrins exploded for kills on quick sets in the middle, she pounded back overpasses for kills and she hit shots off the blockers’ hands for kills.

Before she played, Stivrins’ hands were shaking. She had to remind herself that she’s played in a few of these matches before. Soon, the nerves washed away as the match went on.

“I’ve worked quite hard to get back to where I am right now, so it was a very special moment,” Stivrins said.

Stivrins has dominated during her career, but could we have expected this during her first match?

“Practice was harder than what she saw tonight in the match,” Cook said.

Also, Stivrins has been rehabbing six hours a day most days for the past two months. Her body is strong. Because of that, Stivrins’ blocking moves are bigger than Cook’s seen in her six years here.

Madi Kubik also had 11 kills for the Huskers on .455 hitting. Kayla Caffey and Ally Batenhorst had eight kills apiece.

Hames served a career-best five aces, including four straight when the Huskers put the match away in the third set.

Now what? Now how do the Huskers build on this?

“I think this team is so special,” Stivrins said. “They’re so talented and we’ve seen it in practice, and there have been a few times that it’s translated over to the games. Hopefully now me being there, and that confidence and stepping into more of a leadership role for these people, will bring a sense of calmness and ease back to the court.” 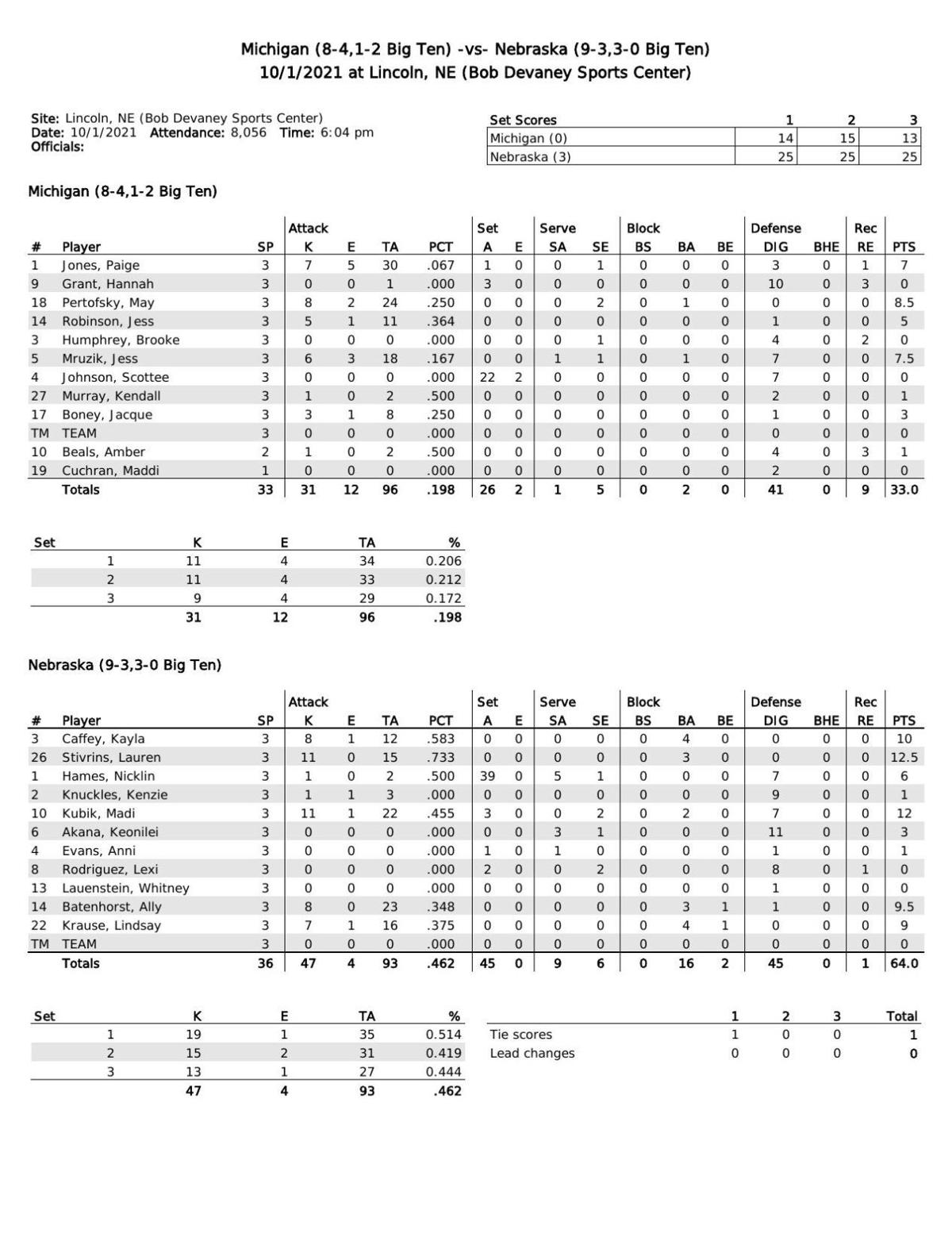 Photos: Nebraska cruises past Michigan to improve to 3-0 in Big Ten

From top recruit to battling for a starting spot, Lindsay Krause riding the waves that come with college volleyball

The Omaha Skutt grad and recently named starter is still adjusting to the college game. "The blockers are so much better now," she says.

John Cook on the radio: Stivrins will be '105%' when she returns, and other Husker notes

For now, Lauren Stivrins is a practice-only player for the Nebraska volleyball team.

Lauren Stivrins has started hitting during practice, and if she doesn’t have any setbacks, she may be inching closer to returning.

The NU coach when asked why Lexi Sun isn't starting: "She hasn’t been one of the best two outside hitters in practice.”

'We were thinking we weren't going to be good:' The story behind NU's 2000 national title team

NU's defense 'showed out' against the Spartans; Kubik, Krause power the attack

The Nebraska volleyball team held the Spartans to a .061 hitting percentage, the second-lowest for a Husker opponent this season.

Now that she's fully back, Lauren Stivrins has her sights on something else in last go-round with Huskers

“I’m just here to make sure that this program gets back on track before I leave,” she said, citing NU's two-year absence in the Final Four.

Nebraska's Lauren Stivrins (26) hits against Michigan in the second set Friday at the Devaney Sports Center.