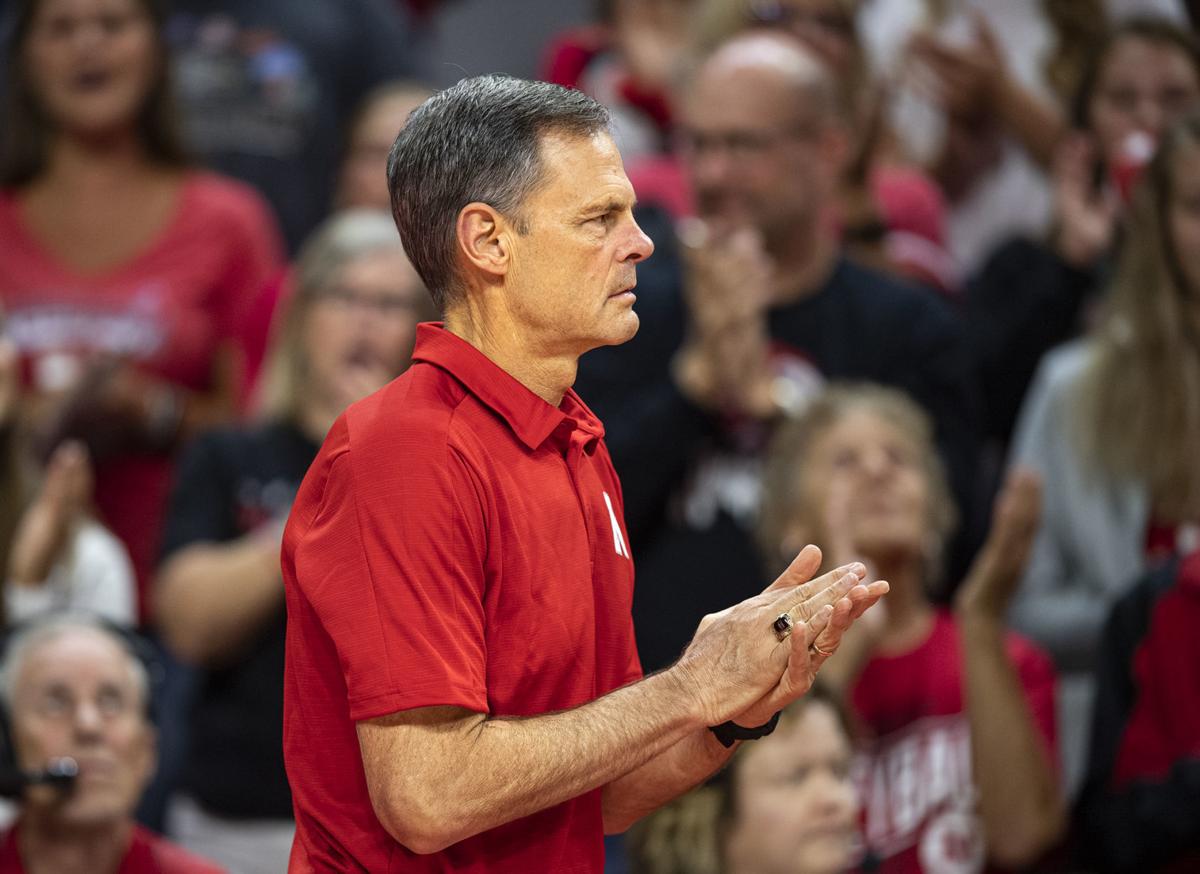 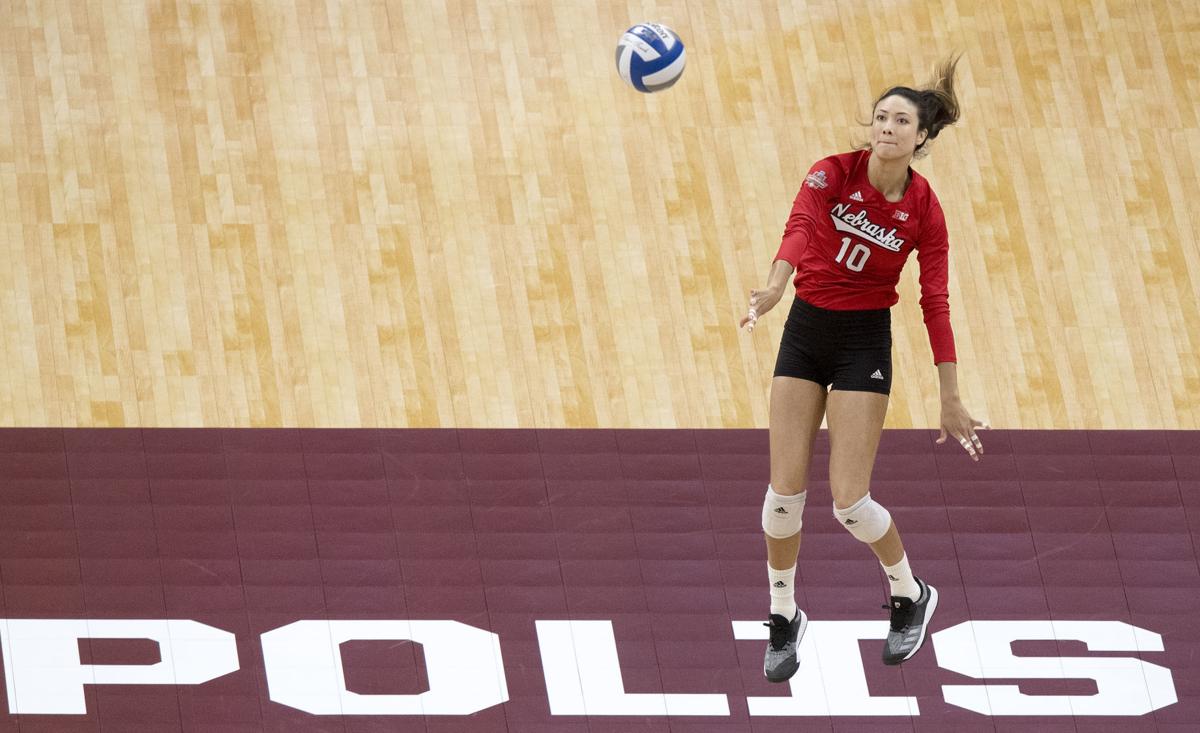 Nebraska’s Lexi Sun serves in the first set against Illinois at the NCAA Final Four in 2018. Sun, from Encinitas, California, will have a homecoming of sorts this weekend as the Husker play in San Diego.

The Nebraska volleyball team is in San Diego this week to play two matches, and looking back now, 31 years later, it's a city that played a part in the history of the Husker volleyball program.

It was in San Diego where Terry Pettit, the coach who built the program during his 23 years as head coach and led Nebraska to its first national championship, met John Cook, the current coach who took over the program after Pettit retired and has coached the Huskers to four more NCAA titles.

Not long after that first meeting in San Diego in 1988, Pettit hired Cook as an assistant coach at Nebraska. About 10 years later, Pettit chose Cook to be his successor at Nebraska.

Second-ranked Nebraska will play Arizona at 6 p.m. Friday, and then No. 25 San Diego at 9 p.m. Saturday.

Cook grew up in Chula Vista, California, and San Diego is where he first started playing and coaching volleyball. In college, Cook graduated from San Diego in 1979 with a degree in history. He later earned a master’s degree from San Diego State.

It was being the co-founder and coach of the San Diego Volleyball Club that got Cook connected to Pettit.

Pettit took the Huskers to San Diego to train during UNL spring break. They would play against small colleges, but Cook had a good club team of high school juniors and seniors and they got lined up to scrimmage.

“We were probably better than (the University of California, San Diego), and that’s where they were playing, so they said, ‘Hey, why don’t you go play Nebraska,’” Cook said. “So we did. And that’s where I met Pettit. We went out to dinner afterward and that’s where we first met and started talking. I was asking him a million questions about how he trained his team, and how they played.”

“He called me and said, ‘Do you want to come back to Nebraska?’” Cook said. “I’m like, ‘OK, well, let me check it out. I’ve never been there before.’ So I flew out and interviewed and got offered the job.”

That was the first first time Cook was a college coach. He later returned to San Diego to coach with the United States men’s national team. In 1992, Cook became the head coach at Wisconsin, before becoming the Nebraska head coach in 2000.

Nebraska decided to go to San Diego this season for Husker junior outside hitter Lexi Sun, who is from nearby Encinitas, but Cook said it will be nice for him to be back. Cook also coached Nebraska in San Diego during the NCAA Final Four in 2001.

Cook’s mother, Bobby Jo, lives in Boise, Idaho, now, but is in San Diego this week after a death in the family. She isn't able to travel very much because she trains animals, and last saw a Nebraska match in person on Lauren Cook’s Senior Night in 2012.

Sun’s home in Encinitas is about 40 minutes from the San Diego campus. Sun also played at San Diego during her freshman season at Texas.

Sun’s family planned a baby shower for her sister for this weekend so family can attend the shower and matches.

“My mom was so excited,” Sun said. “I mean, obviously my dad was excited, too, but more just for my grandparents and people that don’t always get to travel here and see us play.”

Sun’s parents have a condo in Lincoln and travel to Lincoln for most matches.

“They’re empty nesters now so they’re lonely, so they come to almost every game,” Sun said. “They’re dedicated fans, for sure.”

No. 2 Nebraska vs. Arizona

There may not be many major surprises for the Nebraska volleyball this season, with a group that returned five starters from a national runner…

No. 2 Huskers rally from bad start to win in five sets and stay undefeated

It took a really big finish late Saturday night in San Diego, but the Nebraska volleyball team is still undefeated two weeks into the season.

How challenging is serve receive? John Cook has an analogy for that

What means the most after last week is that the Nebraska volleyball team is still undefeated with a 4-0 record, and that’s something that seve…

John Cook on the radio: Different attacks lead to good start to season for Lexi Sun

Through the first four matches of the season, the play of junior outside hitter Lexi Sun has been very positive, and much-needed, as the Huskers learn to play with some inexperienced players at the other outside hitter position.

Nebraska’s Lexi Sun serves in the first set against Illinois at the NCAA Final Four in 2018. Sun, from Encinitas, California, will have a homecoming of sorts this weekend as the Husker play in San Diego.