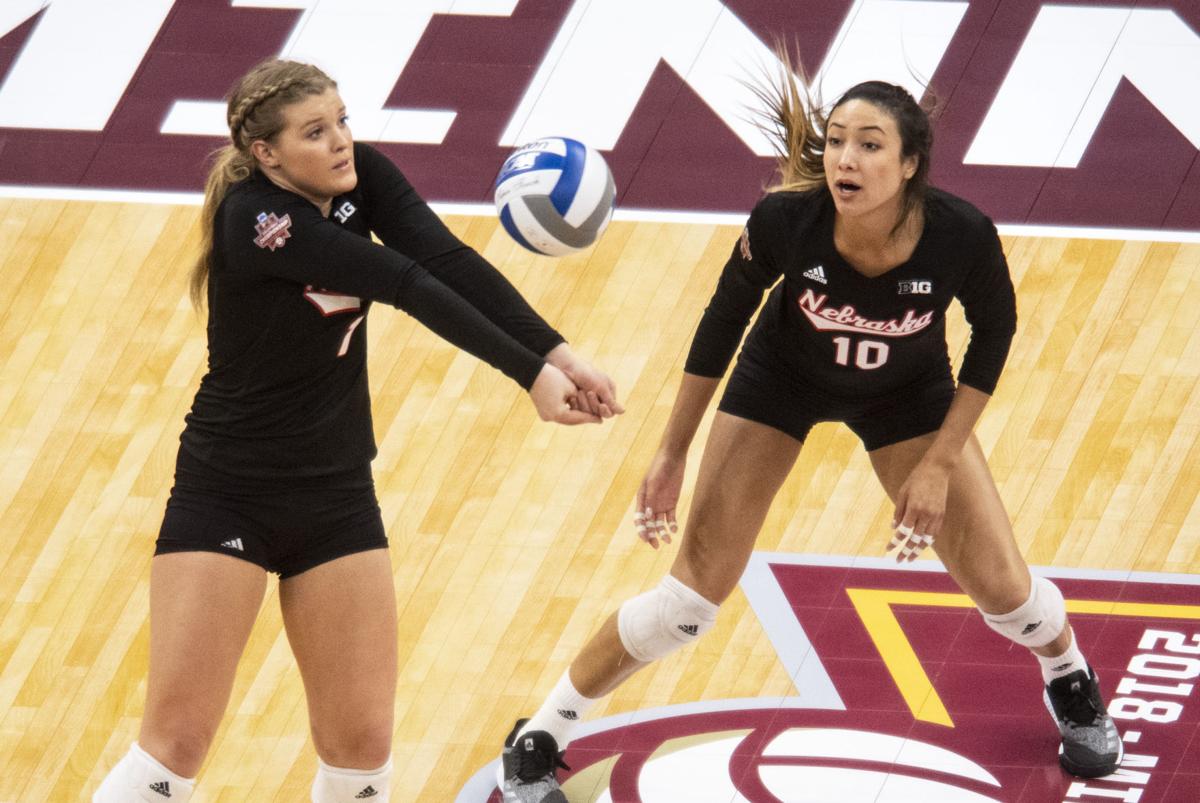 Nebraska's Nicklin Hames (left) returns a serve as Lexi Sun watches her connect with the ball in December during the national championship match at the Target Center in Minneapolis. The No. 1 Huskers hope to avenge that championship loss on Wednesday when they host the No. 2 Cardinal. 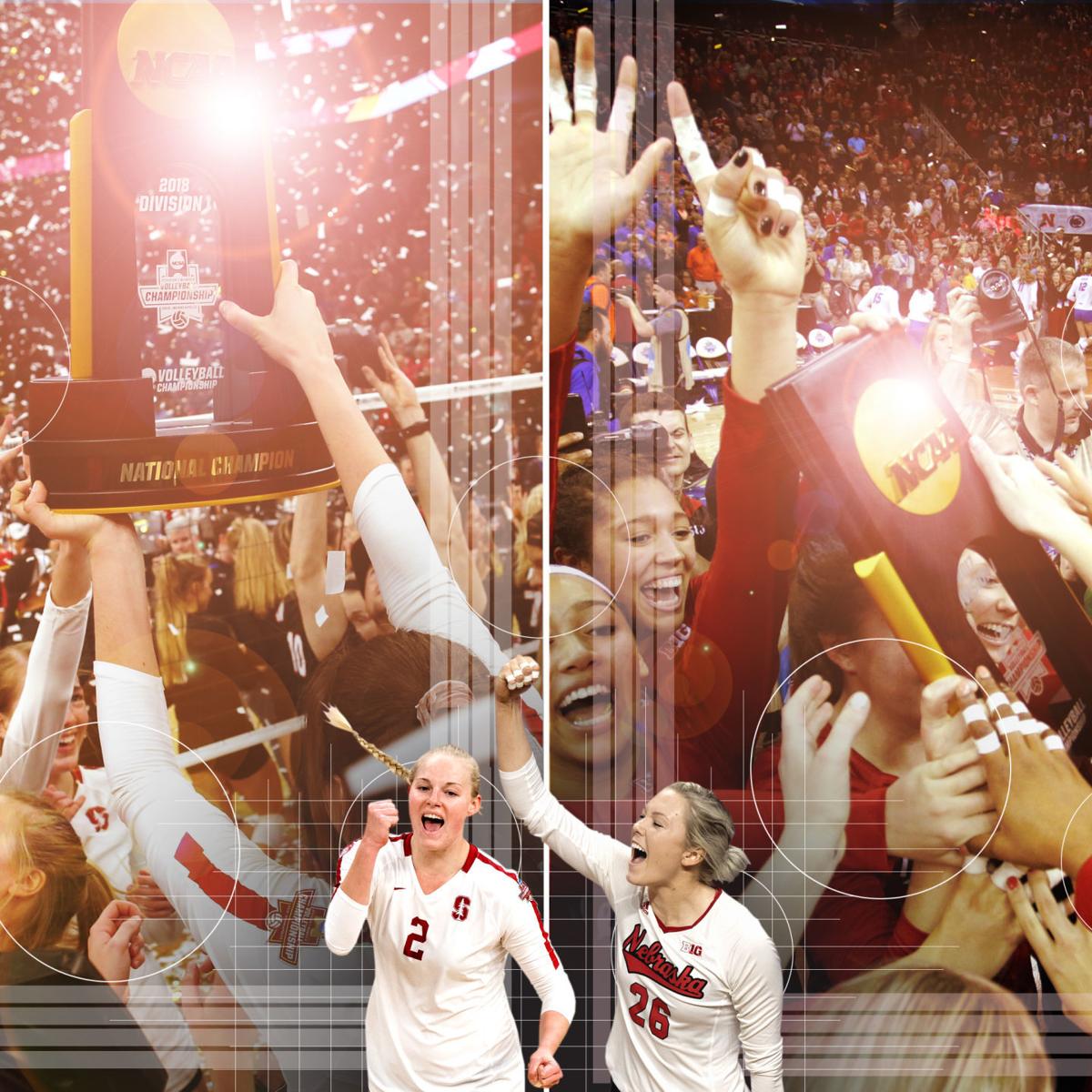 Kathryn Plummer (left) and Lauren Stivrins have been part of national championship teams at Stanford and Nebraska, respectively.

The college volleyball offseason is seven months, and that’s a long time in the world of a player and coach.

There isn’t a next team on the schedule, and that’s a lot of training to push through when nothing is on the line.

Nebraska coach John Cook still likes to have a target, and that philosophy has worked out really well for the Huskers over the past five years.

The latest team that Nebraska has been chasing is Stanford, and that’s Nebraska’s opponent on Wednesday in a 7 p.m. match at the Devaney Sports Center. The match is on TV on the Big Ten Network.

Nebraska (7-0) is the No. 1-ranked team in the country, and Stanford is No. 2, with the teams flipping spots in the poll after Stanford lost its first match last week, ending a 37-match winning streak over two seasons.

Nebraska and Stanford were the teams in the national championship match last season, with the Cardinal winning in five sets. And Nebraska or Stanford has won the past four NCAA titles, with two apiece.

There is a lot of excitement for the match, but no team will win a conference or national championship on Wednesday. And Stanford is probably further along after returning most of its team from last season, while Nebraska starts two freshmen and has no seniors.

It was about six years ago, when Penn State was at the top of college volleyball, that Cook said Nebraska started making decisions in training, recruiting and its playing systems based on what the Huskers would have to do to catch Penn State, especially on defense. That worked well, resulting in Nebraska winning two national titles in three years, and two head-to-head matches against Penn State in the NCAA Tournament.

Now it’s Stanford that Cook has the Huskers chasing.

“Stanford is No. 1 right now, so we got to base everything with how to beat Stanford,” Cook said in August. “How we train, and how we approach things and the level they have to be at in the gym.”

During preseason practice in August the Huskers worked on the things that hurt them in the championship match, including some missed serves in the final set.

Some coaches wouldn’t make offseason goals or decisions based on a single team, but Cook sees purpose in doing so.

“Those are the teams that are playing for national championships, so you better be at that standard,” Cook said. “That’s what we’re trying to do here, I think. We haven’t changed our goals as far as I know. I just think you have to have a measuring stick of who you’re going against. Like in the NFL it’s the New England Patriots. Everybody is chasing those guys. I think there’s probably a lot of teams chasing us. We got to be chasing somebody, and have a standard to go against.”

Plummer is the two-time national player of the year. Hentz was amazing in the championship match with 32 digs. Nebraska studied Hentz in the offseason.

Nebraska setter Nicklin Hames thinks it’s fine that Cook scheduled Stanford, even though Nebraska would be a young team to start the season.

“Stanford is definitely one of the best teams in the nation and they have a lot of experience, and I think you can really test to see how good you are against them, and if you can battle, then you know that you’re there,” Hames said.

Nebraska and Stanford are two of the top three programs in college volleyball, and they’ll play each other during the regular season each of the next five years.

No. 1 Nebraska vs. No. 2 Stanford continues competitive start to college volleyball season

College volleyball fans have already seen some great matches even before the conference season and NCAA Tournament get here.

Cook says Stanford locker room incident was good lesson for everyone, says there is 'total respect' between programs

Scott Frost clearly was ready for one question in particular. His anticipation of media story lines is typically pretty strong. And, boom, there it was -- the first question out of the gate.

No. 2 Huskers survive some drama in match before No. 1 Stanford showdown; Cardinal falls to Minnesota

The Nebraska volleyball team has won 20 of its last 21 matches over two seasons, including all seven during the 2019 season.

'A more complete player': Sun steps up again Friday as No. 2 Huskers improve to 6-0

Mikaela Foecke isn’t going to be walking back out on the court to play for the Nebraska volleyball team again.

'We're not there yet:' Defending champ Stanford wins in 4, gives Huskers a gauge of where they're at

The version of the Stanford volleyball team that lost against Minnesota last week is not the version that Nebraska played on Wednesday.

Did Minnesota really beat the Cardinal 3-1 just four days ago? The Gophers must be a bear.

With Stanford match in the rearview mirror, Nebraska volleyball team hopes to begin improvement for the rest of the season

Now comes the rest of the season for the Nebraska volleyball team, the three months after the Nebraska-Stanford match.

The objective for the Nebraska volleyball team on Saturday was to win its match against Wichita State, and that happened.

Nebraska's Nicklin Hames (left) returns a serve as Lexi Sun watches her connect with the ball in December during the national championship match at the Target Center in Minneapolis. The No. 1 Huskers hope to avenge that championship loss on Wednesday when they host the No. 2 Cardinal.

Kathryn Plummer (left) and Lauren Stivrins have been part of national championship teams at Stanford and Nebraska, respectively.