Does the Nebraska volleyball team have two all-Big Ten players at the middle blocker position this season?

That seems like a real possibility after this weekend, when Husker middle blockers Lauren Stivrins and Kayla Caffey were both exceptional in leading the Huskers to two wins against Illinois. Stivrins is already an All-American, and with the addition of Caffey this season, Nebraska always has a scoring threat in the middle.

Nebraska improved to 9-1 with its third straight sweep.

On Friday, Stivrins and Caffey combined for 17 kills and .600 hitting.

Stivrins had 11 kills on just 16 attempts on Saturday for a .625 hitting percentage. She also had three blocks. Caffey, the first-year Husker via transfer from Missouri, had eight kills on 12 attempts to hit .583.

“You got to give (setter Nicklin Hames) credit, she’s setting those (middles) great,” said Nebraska coach John Cook on the Husker Sports Network. “It’s fun to watch those guys play.”

This season Nebraska always has a threat at the middle blocker spot, and Nebraska has been able to get middles the ball both after a good pass and after a dig.

“If we can dig in-system, man, it makes us really tough,” Cook said.

Nebraska had a .245 hitting percentage and held Illinois to .136. Illinois (2-8) hurt its chances with 11 serving errors and by hitting the ball out 17 times in the match.

Illinois had set points in both the first and second sets, but the Huskers fought off the Illini both times and won the set. In the third set, Nebraska put the match away with a 5-0 run late in the set.

“We found a way to win two really close sets, and then I thought we really turned in up at the end of the third set,” Cook said. “It was back-and-forth, and we played some great volleyball from about 17 points on. I’m pretty pleased and pumped for the Huskers.”

Hames had 33 set assists. Hames gave the Huskers another scare when she collided with a teammate in the second set and had to take a few moments to compose herself.

“She’s tough,” Cook said. “She was struggling, but she found a way to will that team to a win.”

Lexi Sun added 14 kills for Nebraska. But the Huskers’ other outside hitter, Madi Kubik, had just two kills. And Riley Zuhn and Jazz Sweet both played the right-side hitter spot but combined for just one kill.

“We got to get all five hitters going, so we got to fix that,” Cook said. “We just can’t rely on our middles all of the time.”

In the first set, Nebraska trailed 23-20 before rallying with a big finish to win the set. The Huskers won six of the final seven points. Illinois had set point at 24-22, but couldn’t convert. Nebraska won the final four points to win the set.

In the second set, Illinois again had the better start to the set, leading 20-17 and then having a set point at 24-23. But Sun had a kill to tie the set at 24, setting up a back-and-forth finish. Nebraska won the final two points on a kill by Kubik and a kill by Stivrins on the slide attack to win the set 30-28.

Nebraska hosts Ohio State next weekend for two matches. The Buckeyes are the surprise team in the league this season with a 12-0 record that includes two wins against Penn State. 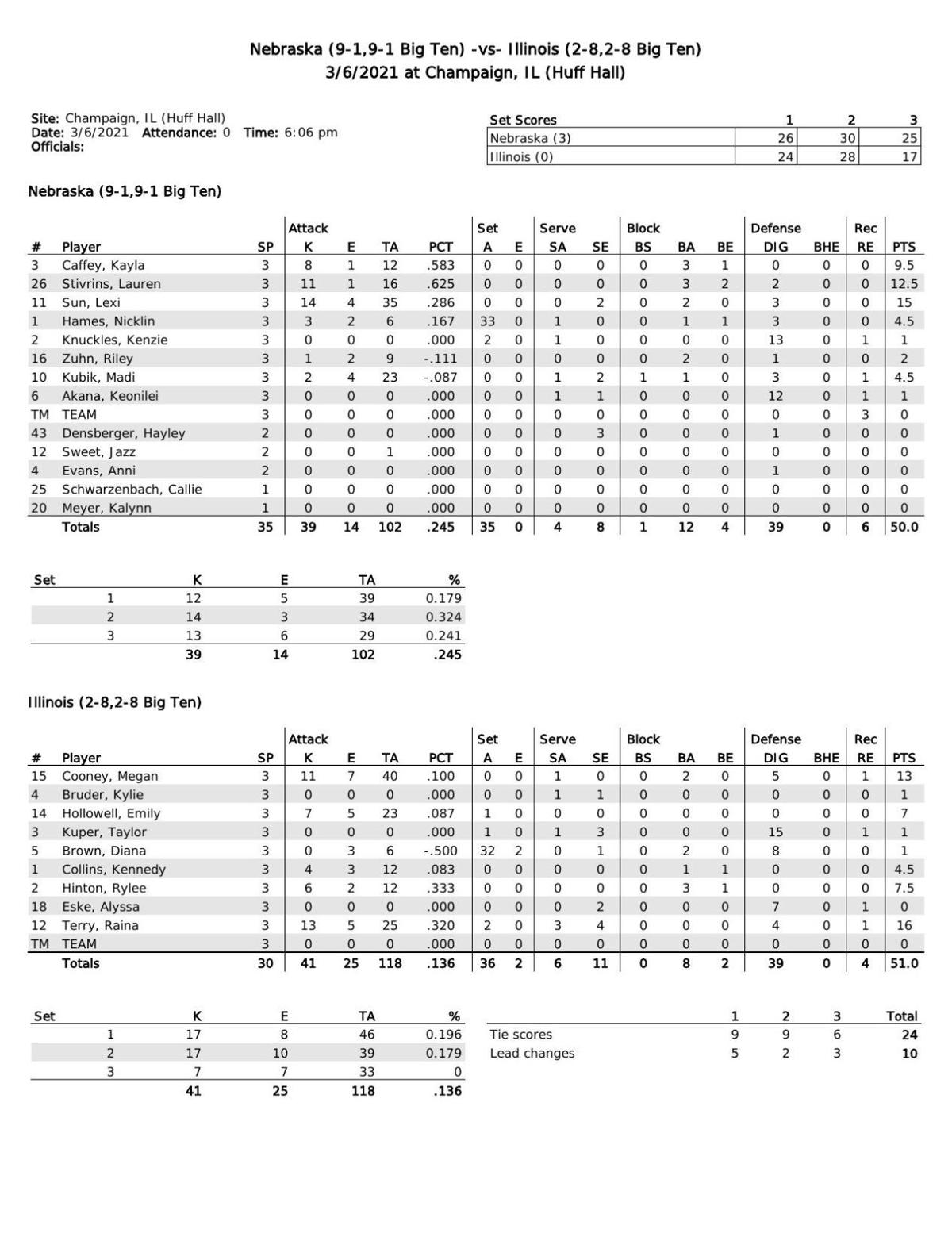