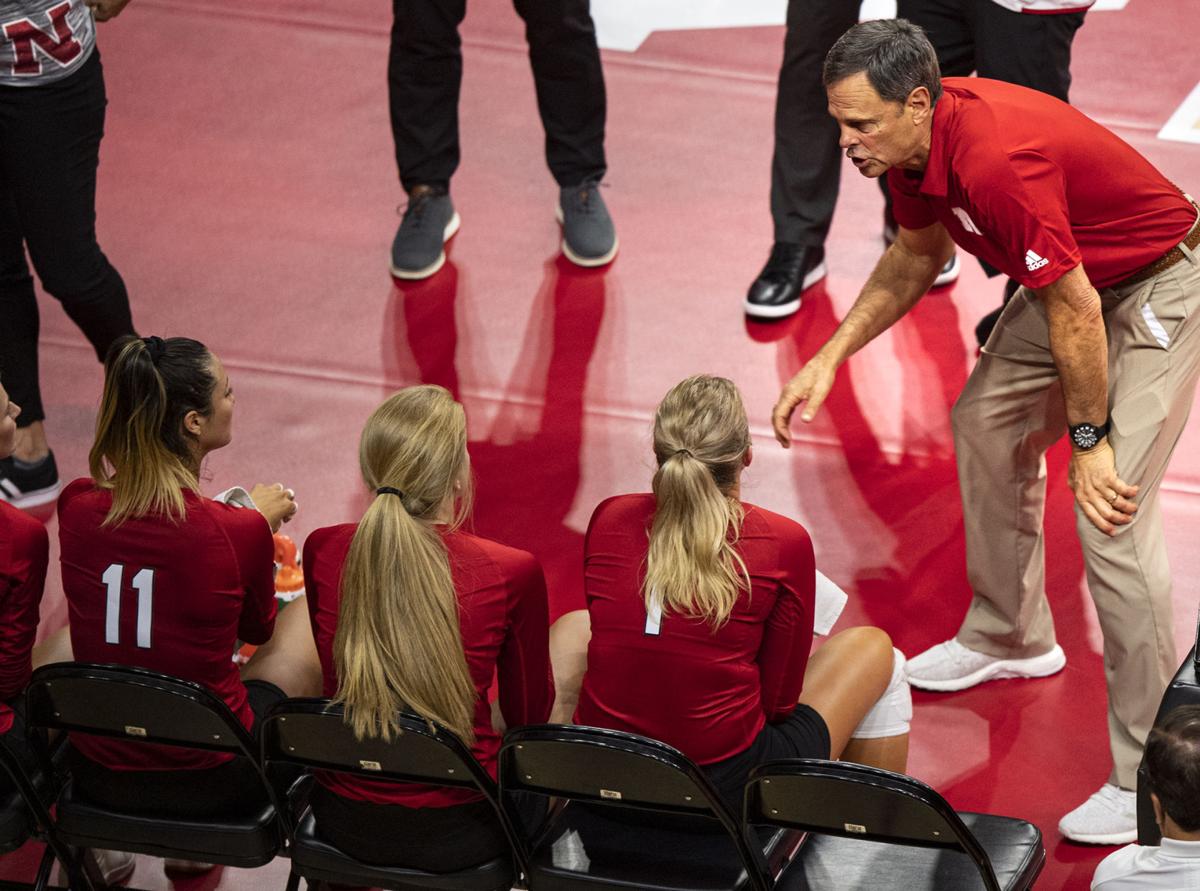 Nebraska volleyball coach John Cook talks to his players between sets Aug. 24 during the Red-White Scrimmage at the Devaney Sports Center. 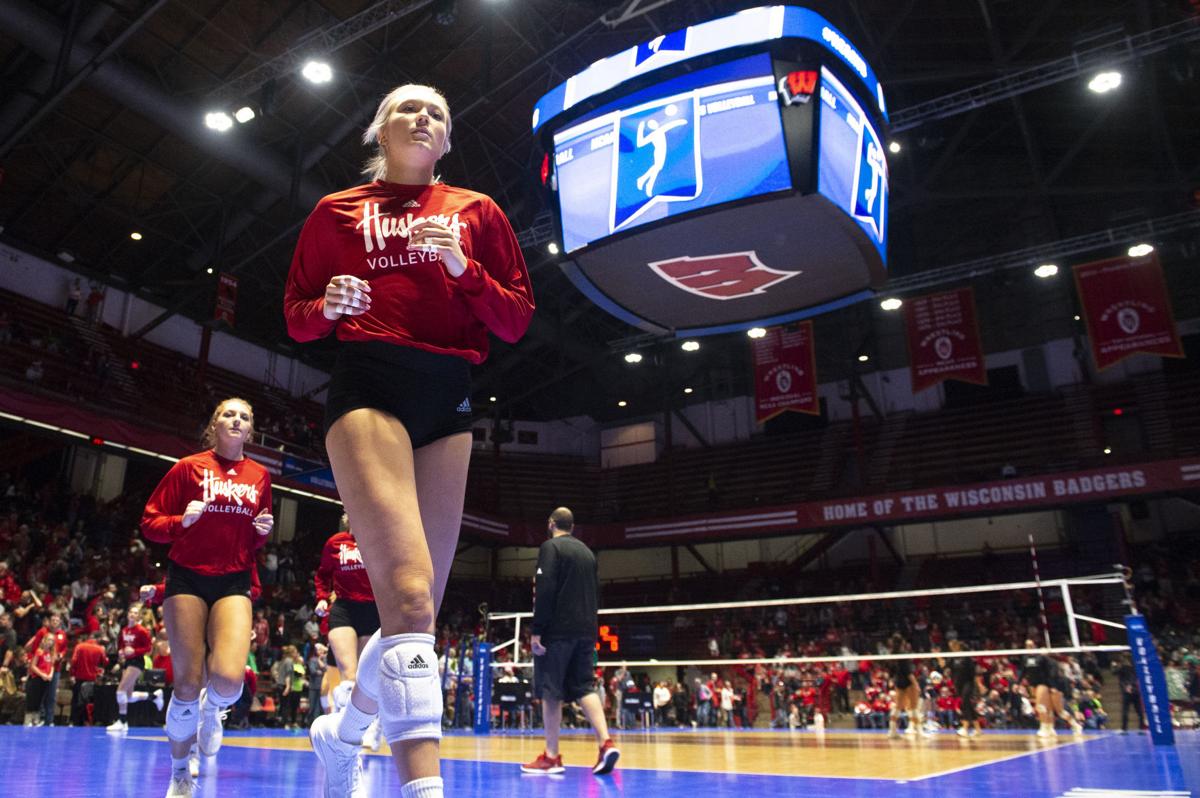 Nebraska middle blocker Lauren Stivrins (26) walks off the court during warmups before a NCAA regional semifinal match against Hawaii on Dec. 13, 2019, at UW Field House in Madison, Wis.

Unless something changes in the next two days, the Nebraska volleyball team will be on the court Wednesday for its first official practice of the 2020 season, coach John Cook said Monday afternoon.

Of course, Cook knows that plans can change quickly in college sports during a pandemic, and he’s got three drafts of torn-up season schedules to prove it.

The NCAA Board of Governors is scheduled to meet Tuesday, when changes could be made to fall sports championships such as the NCAA Division I volleyball tournament. The board doesn't make decisions about college football at the FBS level.

“I just know there are all of these committees, and there is a big meeting (Tuesday), and there is another big meeting Wednesday, and then we have a head coaches meeting on Thursday,” said Cook to the Journal Star. “So I think there is going to be some stuff decided this week.”

All of the Nebraska volleyball players have been in Lincoln for voluntary strength and conditioning workouts and player-led practices since June 8.

Nebraska is actually starting practice a few days earlier than normal because of classes beginning at UNL on Aug. 17.

How does it feel for Cook to know that the season has a start date with Wednesday’s practice?

“It still feels very uncertain because there is a lot of big meetings this week, and there is going to be a lot of decisions made,” he said. “We don’t know if we’re going to have an NCAA championship (in December).

“But we’re focused on, hey, we get a chance to start training on Wednesday, so we’re preparing for that and we’re going full speed ahead.”

The Huskers will be in the normal preseason schedule where it can have two-a-day practices and practice six days per week. But Cook says they’ll ease into training because the players haven’t had long volleyball practices in several months, and they don’t need to rush to get ready for the first match.

As for Nebraska’s schedule for matches, that’s still to be determined. Cook doesn’t even have the schedule himself.

The season for certain won’t begin when it usually does in late August. The Big Ten has already eliminated nonconference competition for all fall sports. While the league matches could begin before the normal late September start date for league matches, volleyball matches probably won’t be played until after the Big Ten schools have started playing football games. The Big Ten football schedule also hasn’t been announced.

The Big Ten coaches have proposed to play the typical 20-match league schedule, but with a different format similar to the college hockey schedule where schools play the same team on back-to-back nights in the same city. That would cut down on the number of airports and hotels each team would have to be in, but also means Nebraska may only play 10 of the other 13 league teams.

Several conferences that have automatic qualifier spots in the NCAA Tournament have already announced they’re moving volleyball to the spring.

The NCAA Final Four is scheduled for Dec. 17-19 in Omaha, and Nebraska has a veteran team led by All-Americans Lauren Stivrins and Lexi Sun that’s capable of being there.

If Cook had a vote, or was asked by Nebraska’s administrators for his input, he says he’d move volleyball to the spring for this season.

“I’d move to the spring and let football play in the fall so they’re the only sport going and bubble those guys up (as much as possible) and move everybody else to the spring,” Cook said.

“It gives us the best chance to get through a whole season, and it gives us more time to figure things out. You know we’ve been back here for eight weeks and (most) Creighton athletes still aren’t even back yet. I think they come in the first day of school. So you have such a wide disparity, and it would give everybody a chance in the fall to get their athletes properly prepared. These guys haven’t done anything officially with volleyball since March.”

Wisconsin volleyball coach Kelly Sheffield also said in an interview last week with the Wisconsin State Journal that he prefers for the season to move to the spring.

Cook says he’s not able to say if any volleyball players have tested positive for COVID-19, but that the summer workouts appear to have gone well.

How does Cook feel the players are handling all of the unknowns of the season?

For now the plan is to have a team activity day Tuesday and the first practice Wednesday. On Tuesday the team will have a golf tournament, a team dinner and a meeting.

The team has been doing some activities together this summer for a diversion.

“A lot of them have picked up golf this summer just as something to do and be outside,” Cook said.

In a time where the notion of a delayed season is greeted with scoffs (see Steven M. Sipple's Monday column), John Cook thinks college volleyb…

Dozens of people will be involved in helping decide whether the Big Ten will have fall sports in 2020. But where does the buck stop?

The league plans to make a decision whether to begin football preseason camps — slated for next Friday — on time "in the next five days."

Volleyball fans will get to watch three future Nebraska volleyball players in the same gym during a high school tournament in October.

John Cook met Nicole Drewnick when she was a kid, and years later she came to play for him at Nebraska

John Cook knew Nicole Drewnick when she was about 6-years-old, long before he began recruiting her a few years ago, or when she joined the Nebraska volleyball team prior to the 2019 season.

Parker Gabriel breaks down the Big Ten's updated coronavirus guidelines, which include a pre-competition test and protocol for various scenarios.

Husker WR Omar Manning to wear No. 5; what are the other newcomers wearing?

Nebraska football is starting preseason camp on Friday and along with that, the program announced via Twitter some new player numbers.

Nebraska volleyball's aspirations to return to the Final Four in Omaha this winter are on hold. Here's what it means for John Cook's group.

Nebraska volleyball coach John Cook talks to his players between sets Aug. 24 during the Red-White Scrimmage at the Devaney Sports Center.

Nebraska middle blocker Lauren Stivrins (26) walks off the court during warmups before a NCAA regional semifinal match against Hawaii on Dec. 13, 2019, at UW Field House in Madison, Wis.