US expels Russian diplomats, imposes new round of sanctions 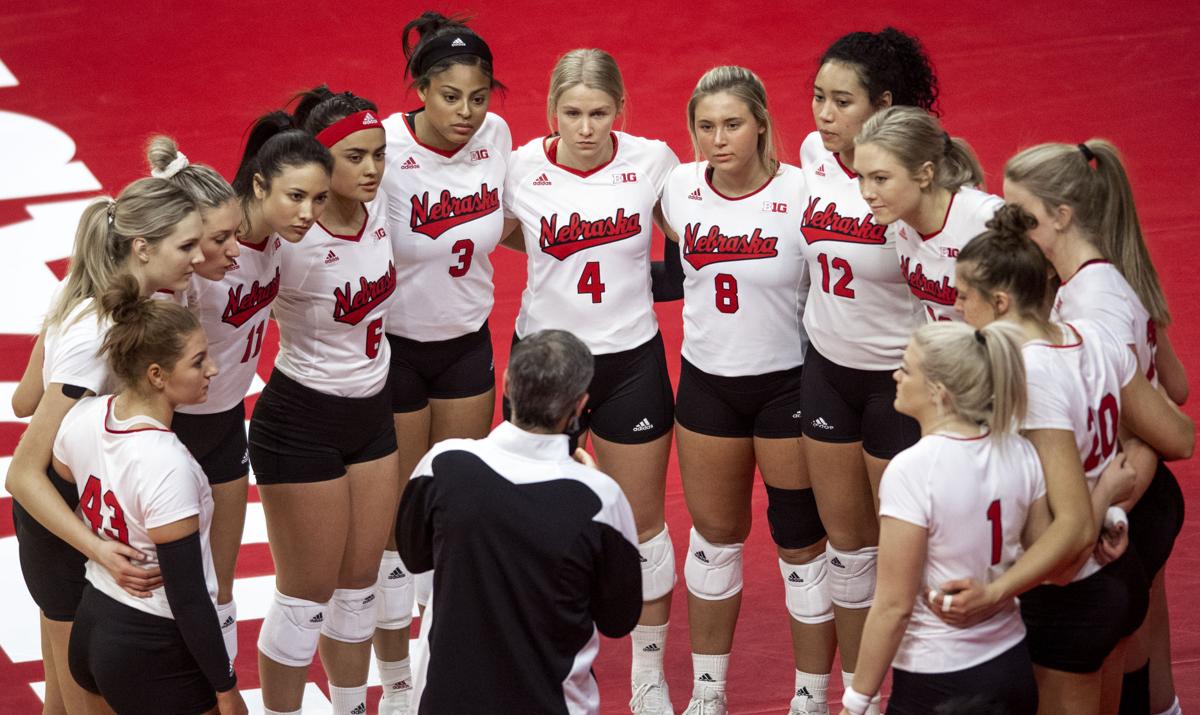 Nebraska coach John Cook (bottom center) talks to the team before they take on Maryland on Feb. 6 at the Devaney Sports Center. 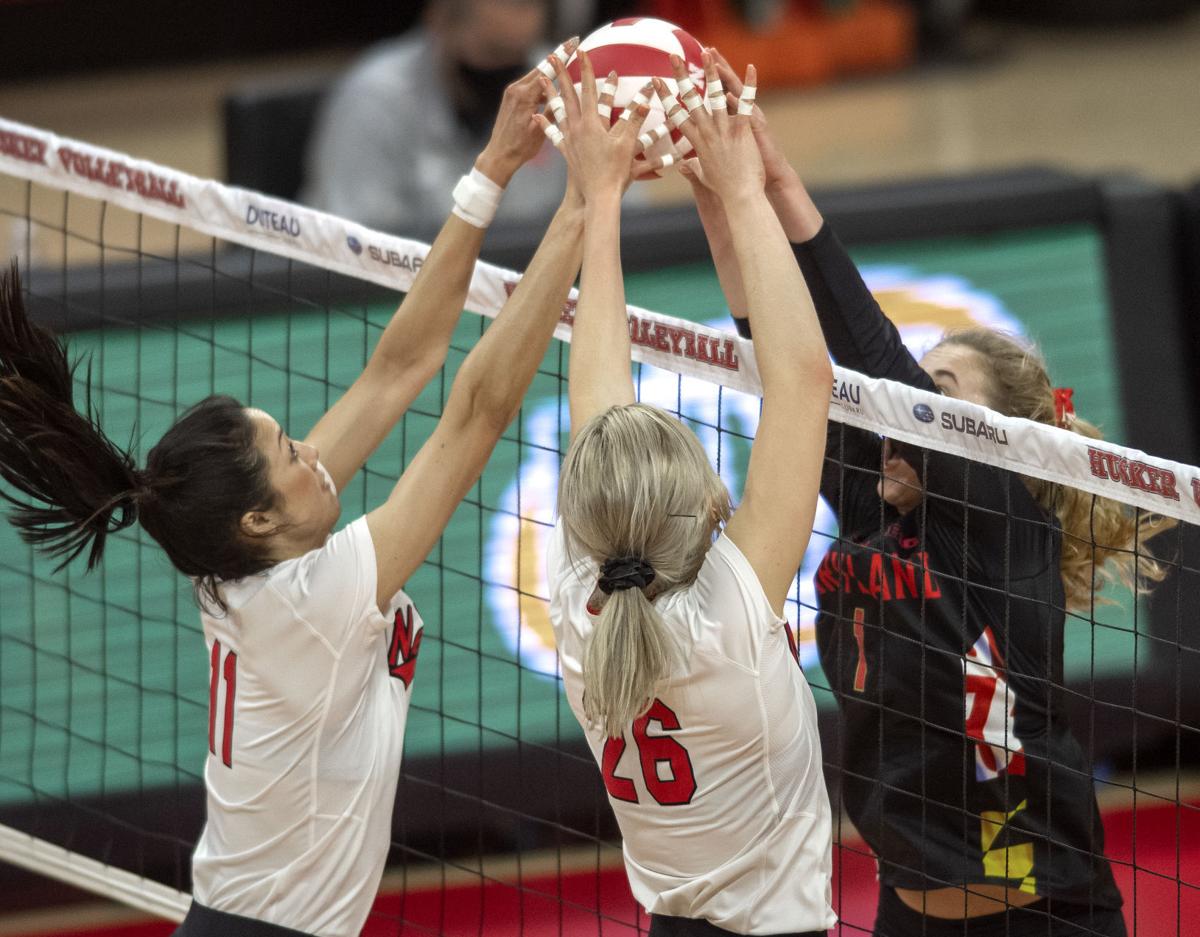 Nebraska’s Lexi Sun (11) and Lauren Stivrins (26) go up for a ball during a match against Maryland on Feb. 6 at the Devaney Sports Center.

When the Nebraska volleyball team played Maryland on Feb. 6 it was Nebraska’s first match on national television in more than 13 months because the start of the Huskers' season was postponed due to COVID-19.

So residents of Nebraska, alumni in other parts of the country and college volleyball fans were clearly ready to watch the Huskers.

Viewership for that match on the Big Ten Network was 203,382, making it the network’s fourth-most watched volleyball match in Big Ten Network history, even though Maryland isn't ranked.

And the viewership is typically strong when the Huskers play, with three of the four most-watched matches on BTN of all time including the Huskers. Nebraska’s match against Stanford early in the 2019 season — No. 1 vs. No. 2 — had 228,913 viewers.

Nebraska’s two matches last week against Minnesota on BTN each had more than 130,000 viewers, according to information provided to the Journal Star by BTN.

Last Sunday’s match, which began at 11 a.m., delivered 139,844 viewers. The match ranks as the network’s second-most watched of the season. It also ranked second out of six nationally rated women’s collegiate sporting events on cable for the day, ahead of ESPN2’s North Carolina-NC State women’s basketball game (103,352 viewers).

Both of Nebraska’s matches against No. 1 Wisconsin this weekend are on BTN. Friday’s match begins at 7 p.m., and Saturday’s start time is 8 p.m.

Chart toppers: After Stanford dropped out of the American Volleyball Coaches Association rankings this week, Nebraska now holds the distinction of being the only program ranked in every poll since 1982.

Stanford, the defending national champion, dropped out because it has a 1-3 record and has had six matches postponed.

Nebraska has been ranked in the poll a record 564 times, including 508 times in the top 10.

Nebraska coach John Cook, who has led the program for 21 seasons, takes pride in Nebraska’s consistency in the sport over nearly four decades.

“One thing that we’ve always prided ourselves on at Nebraska is being consistently good,” Cook said. “That goes to being a year-round program and developing athletes and playing at a high level all of the time.”

Passers feel the love: Nebraska’s improved play in serve-receive is what helped the Huskers beat No. 5 Minnesota last Sunday after losing to the Gophers two days earlier.

A big kill or block often gets the biggest reaction in volleyball, but Nebraska libero Kenzie Knuckles knows how much Nebraska’s players in serve-receive are valued by their teammates.

“After every kill, or even if they don’t get a kill, they will turn back and say, ‘That’s a great pass; do it again,’” Knuckles said. “And if it’s not a great pass we’re the first ones to say, ‘We’ll get you the next pass for the next kill.’ There is an appreciation on both sides.”

Badgers on a streak: Stanford and Wisconsin are the two programs that have been the toughest for Nebraska to beat in recent years.

Wisconsin swept Nebraska three times last season, including in the NCAA Elite Eight, and has won five straight overall against the Huskers.

This season the Badgers have a 10-0 record while only losing two sets. Wisconsin is again led by 6-foot-8 middle blocker Dana Rettke, who has already played with the United States national team.

“Wisconsin is playing at a really high level right now,” Cook said. “Their numbers are great, and they’re dominating everybody they’ve played statistically. It will be a great test for us, and we’ll see where we’re at. This is what we’ve been working on is trying to be a better team from last year.”

Photos: Huskers get best of Gophers in Round 2 at Devaney Sports Center

Viewership of women’s volleyball matches on Big Ten Network has been on the rise. Three of the most-watched matches in BTN history include Nebraska.

Nebraska volleyball team stays at No. 4 in AVCA poll

The Huskers were one of five teams in last week’s top 10 that weren't able to play matches last week.

Nicklin Hames and her Husker teammates know to brace for bad news when a particular text message from John Cook chimes their phones.

“We were able to play some really good volleyball from 19 points on,” John Cook said.

When right-side hitter Riley Zuhn suffered a season-ending injury last week with a broken bone in her foot, the Huskers entered the caution zone.

Nebraska coach John Cook (bottom center) talks to the team before they take on Maryland on Feb. 6 at the Devaney Sports Center.

Nebraska’s Lexi Sun (11) and Lauren Stivrins (26) go up for a ball during a match against Maryland on Feb. 6 at the Devaney Sports Center.