Nebraska setter Kelly Hunter (3) put the ball up in second-set action in an NCAA volleyball national semifinal Thursday at the Sprint Center in Kansas City, Mo. 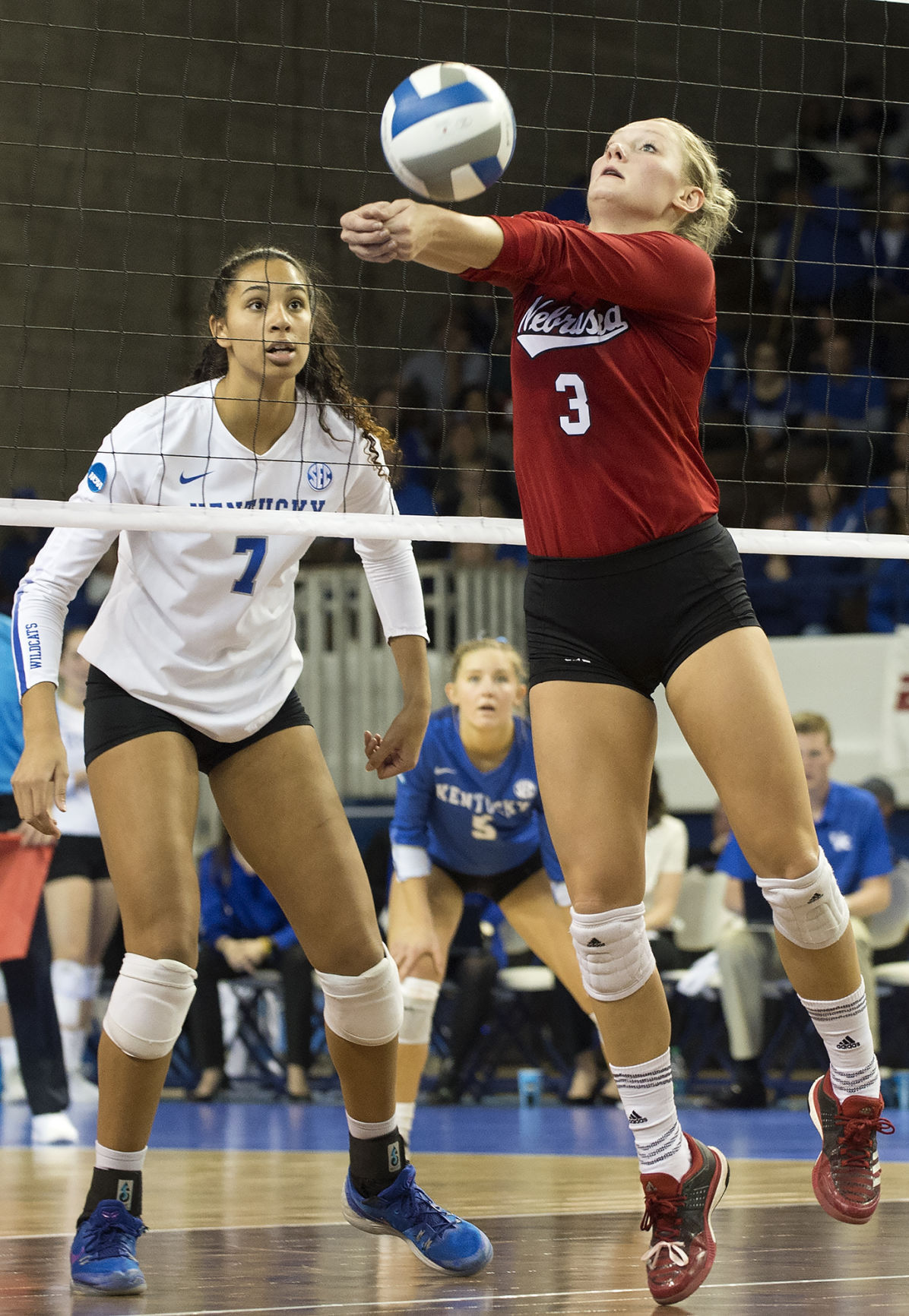 KANSAS CITY, Mo. — Kelly Hunter broke her social media silence on Friday morning, dusting off the Twitter machine and sending out a post. It appears to be her first Tweet in more than two years.

“First tweet in a while because man I love this team,” Hunter wrote. As of Friday evening the post had been “liked” more than 3,600 times.

First tweet in a while because man I love this team pic.twitter.com/ibgtVd16GP

“There were so many cool pictures that came out, and we all want to post basically every single one,” Hunter said on Friday afternoon. “But for some reason that picture, we were all in such a tight huddle, and you could see the logo for the championships, and I just thought it was a good picture.

“But like I said in my tweet, I love this team, and this has probably been my favorite year since I've been here of my five. People liked it, loved it. It's just one of those great pictures that you'll never forget.”

What is it that Hunter loves about this team?

“I think it's just the fact that we all love each other and are playing with each other and are working hard on getting better every day,” Hunter said. “We just have this mentality that I've never had on a team I've been on. It's just so freeing to play with this group. We know that we all have each other's backs. No matter what happens, we're in it together. If we lose a point, we're moving on. If we win the point, we're moving on.

“It's been kind of a freeing year for me, and I think everyone else as well.”

Saturday will be Hunter’s final college match. She’ll go down as one of the all-time Husker greats, and a second national title would do more than solidify her spot in program history.

Hunter already has set the Huskers to the 2015 national championship, and two Big Ten titles, in her three seasons as the starter. She never lost against Penn State in seven matches as a starter.

Hunter improved to 15-1 in her NCAA Tournament career as Nebraska’s starting setter. Her 15 postseason wins are the most by a starting setter in Husker history, passing Fiona Nepo (14-3).

Hunter has 173 assists in four career matches in the Final Four (national semifinals and finals). Only 10 players in NCAA history have recorded 200 career assists at the Final Four, and Hunter would be the first for Nebraska.

“I think you have to put her in the class as the best setter that’s ever played here,” Nebraska coach John Cook said.

In Thursday's match Hunter had 47 set assists, a career-high 23 digs, six blocks, one ace serve and the game-winning kill.

This season could have been a challenge for Hunter. Many of the best players are only at Nebraska four years, but Hunter was here a fifth, after Cook asked her to redshirt her second season. That set her up to be the starter her final three seasons.

All the players in her original class had graduated. There was a lot of pressure on Hunter to lead a young team, and then she got injured before the season began.

But Hunter has been energized by this team, and this season.

“This group is so eager to get better,” she said. “We've gone into the gym every single day, and I don't think we've really had a day we weren't working our butts off and trying to get better. There's been something new we're working on every week, every day, every match.

“I think it's really cool for us being seniors to still try and change our game and get better. It could be close to the end of our careers and people might not want to change. But it's the new stuff that we've added on has been so fun. Just like I said, our mentality and general vibe out there is something I've really never experienced as an athlete, and it really is one of the most special feelings.”

Cook called Hunter into his office in January and told her she was going to have to be better this season. The whole team is going to feed off of you, Cook said, and you’ll determine the season that we have.

When Hunter was setting Kadie and Amber Rolfzen in previous seasons, they were so good they could take an average set and still get a kill.

New hitters Annika Albrecht and Jazz Sweet were going to need great sets. Hunter also needed to understand the game better, and she has. Cook has praised Hunter several times for figuring out what the opponent was doing, and taking that away.

“She had to take it to another level,” Cook said. “I think she's done that with her serving, her blocking, her setting, her defense, everything.”

Husker Extra Side Out: Live updates from Nebraska vs. Florida

Nebraska volleyball goes for its fifth national title, while Florida is chasing its first on Saturday at the Sprint Center in Kansas City.

Huskers and Gators for it all: A quick and breezy breakdown of Saturday's match

The Railyard is going to be hopping Saturday in what fans hope is a big night for Nebraska athletics.

KANSAS CITY, Mo. — The first matchup was 111 days ago as of Friday.

Nebraska volleyball program is a source of pride for the state

KANSAS CITY, Mo. — Close your eyes, and you would have thought you were back in Lincoln.

Nebraska turns in a masterpiece for fifth NCAA volleyball title

Nebraska setter Kelly Hunter (3) put the ball up in second-set action in an NCAA volleyball national semifinal Thursday at the Sprint Center in Kansas City, Mo.