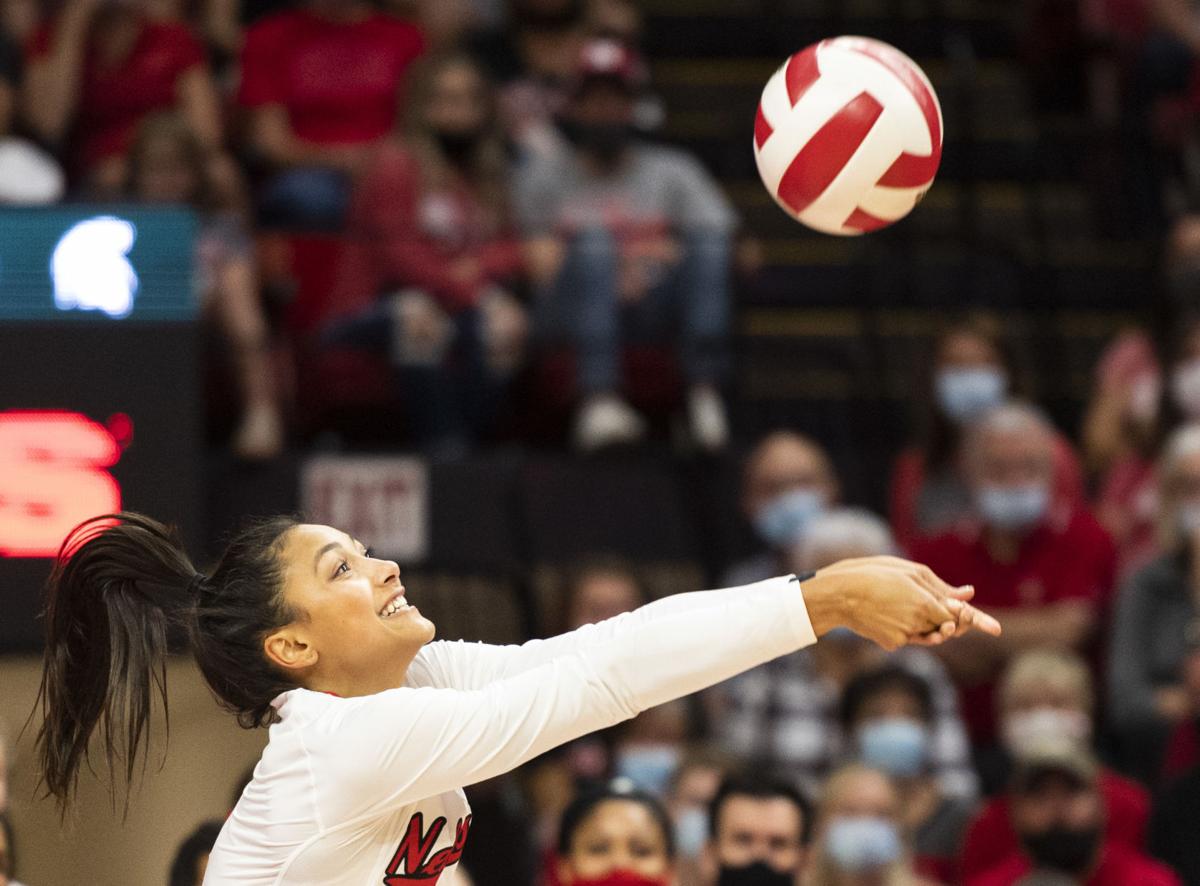 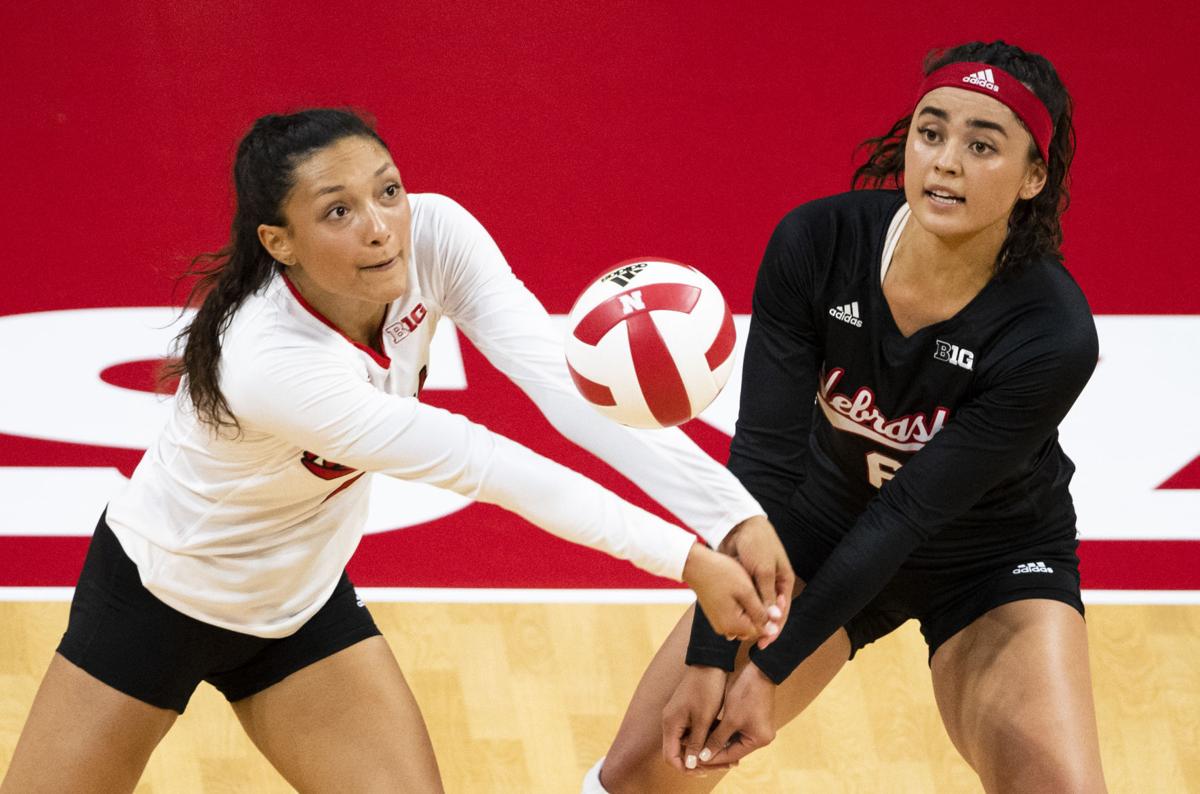 Nebraska's Kenzie Knuckles (left) passes in front of Keonilei Akana during the Huskers' Red-White Scrimmage on Aug. 21 at the Devaney Sports Center.

Kenzie Knuckles isn’t the first player in the history of the Nebraska volleyball program who didn't return to the starting position she held the previous season.

Freshmen and transfer players join the team every year, and returning players improve. And coach John Cook’s philosophy is that the current year is always the best year to try to win that next national championship, so he’s not thinking a lot about what’s best for next season. That means the players who he believes give the Huskers the best chance to do that are the starters.

So you don’t always keep a spot in the starting lineup.

So now Knuckles plays the defensive specialist position. That means the junior only plays half of the time, usually subbing in for outside hitter Ally Batenhorst.

As you would expect, Knuckles said not getting to be the Husker libero for another season was hard to take. But she was able to shift to embrace her new role, and that’s been good for the Huskers. There are times this season when Knuckles has played “exceptional,” Cook said.

Now, there are times when the Huskers have two Big Ten-caliber liberos on the court at the same time with Knuckles and Rodriguez. And when you include defensive specialist Keonilei Akana and setter Nicklin Hames, Cook says the Huskers have “elite” back-row defensive players.

Nebraska ranks second in the Big Ten in defense, holding opponents to a .149 hitting percentage.

Behind that defense, the No. 9 Huskers lead the Big Ten standings with a 9-0 record.

She “loves” her new position.

“I feel like it allows me to play more free and loose, and the volleyball that I’m used to playing,” said Knuckles, who played outside hitter in high school in Yorktown, Indiana.

Cook says Knuckles had handled the position change really well, and her teammates seemed to agree when she was chosen as one of the team’s three captains along with Lauren Stivrins and Hames.

“The conversation (with Knuckles this summer) was you’re competing for libero, and if you don’t get that, you’re going to compete to play back row if you’re one of our best passers, defenders and servers,” Cook said. “Because that’s how we build (the lineup). So either way, this is how you can get on the court.”

Knuckles is only 5-foot-8, but Cook says she’s a great hitter.

“It’s way different than what teams are used to seeing. She really can move it around,” Cook said.

As a libero, Knuckles was grounded, but in her new position she can hit. And when the short player going up against 6-footers connects for a kill, it puts a big charge into the team and crowd.

Knuckles has 22 kills. Against Indiana, Knuckles was 2-for-4 on back-row attacks, and against Illinois, she was 3-for-6.

The back-row attack can be an outlet set when Nebraska’s not in a position to run its normal offense.

“If I see that the play is going out of whack, or we have Madi (Kubik) down or in certain situations, then I just know that I need to get set right now and just call for the ball, and hope for the best,” Knuckles said.

Knuckles also has been one of the Huskers’ best servers. She has 16 ace serves and 11 serving errors, which is one of the best ace-to-error ratios on the team. During Wednesday’s 3-0 win against Iowa Knuckles’ serving may have won the Huskers the close third set after she served a 5-0 run.

On Saturday, No. 9 Nebraska hosts No. 7 Purdue, with the Boilermakers (14-4, 6-3 Big Ten) coming off a five-set loss against unranked Michigan State on Wednesday. The match begins at 8 p.m. on Big Ten Network.

“We’re playing the best that we have been all season right now, so I think we’re pretty confident,” Knuckles said.

The Huskers match the highest they have been ranked in the poll since mid-September.

Husker volleyball team looks to reverse a rare — a very rare — trend when the No. 3 Badgers visit

The Wisconsin volleyball team has what only three college programs in 46 years have — a five-match winning streak in a series against Nebraska.

Wisconsin pulled even with Nebraska for first place in the Big Ten volleyball standings, and snapped the Huskers' 10-match winning streak.

Nebraska volleyball stays in top 10 of rankings despite winless week

Nebraska remains tied with Wisconsin for first place in the Big Ten with a 10-2 league record.

Cook said if you would have told him six weeks ago that the Huskers would still be in line for a top-10 seed in the NCAA Tournament, he’d take it.

Kubik has led the Huskers in kills in 12 straight matches, but that doesn't change her responsibilities in the serve-receive game.

Sun returned to the starting lineup for the first time in about seven weeks weeks and teamed up with Madi Kubik to lead the Husker attack on offense.

Nebraska's Kenzie Knuckles (left) passes in front of Keonilei Akana during the Huskers' Red-White Scrimmage on Aug. 21 at the Devaney Sports Center.