For Louisville and Busboom Kelly, a 'milestone' victory. For Huskers, it's back to the drawing board
0 Comments
Share this
1 of 2 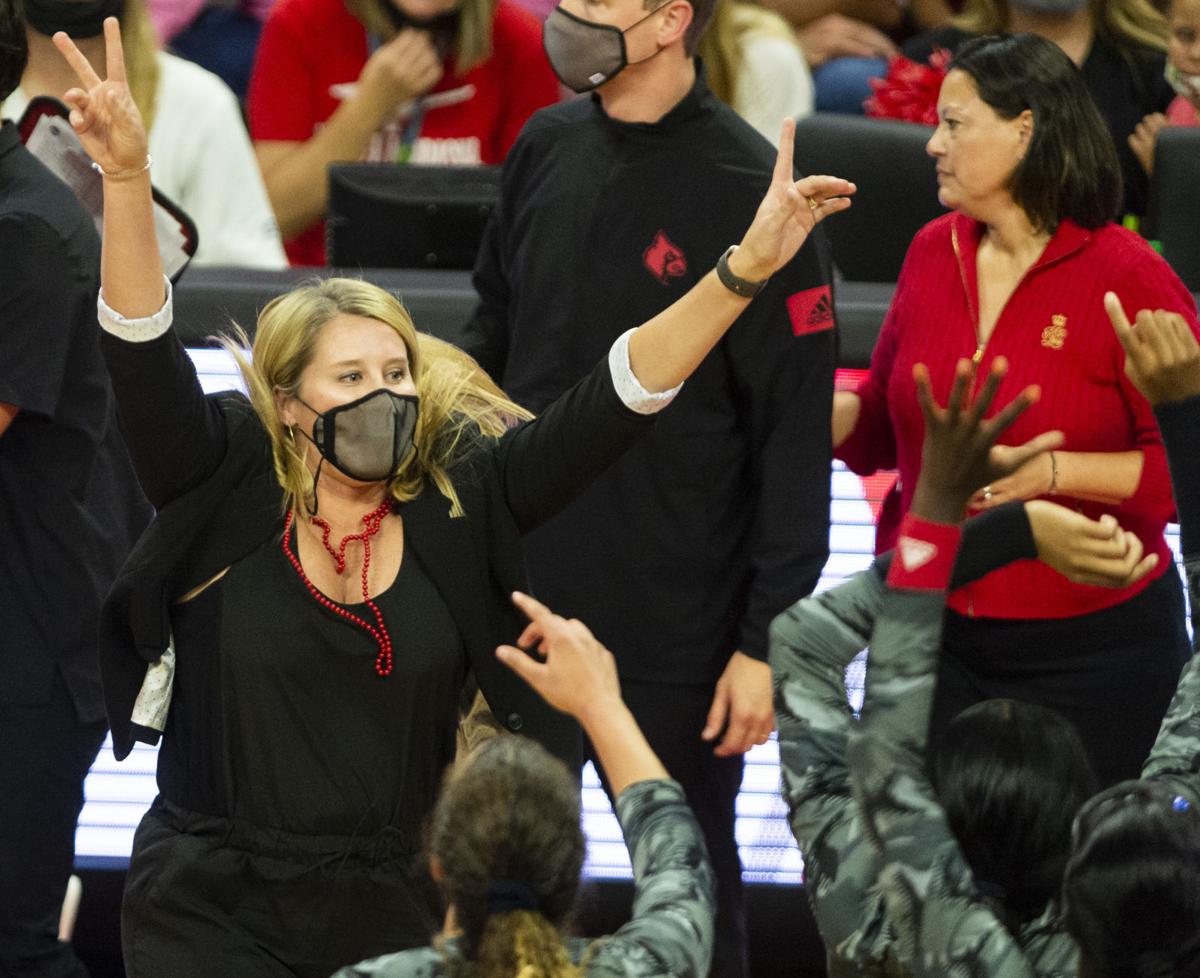 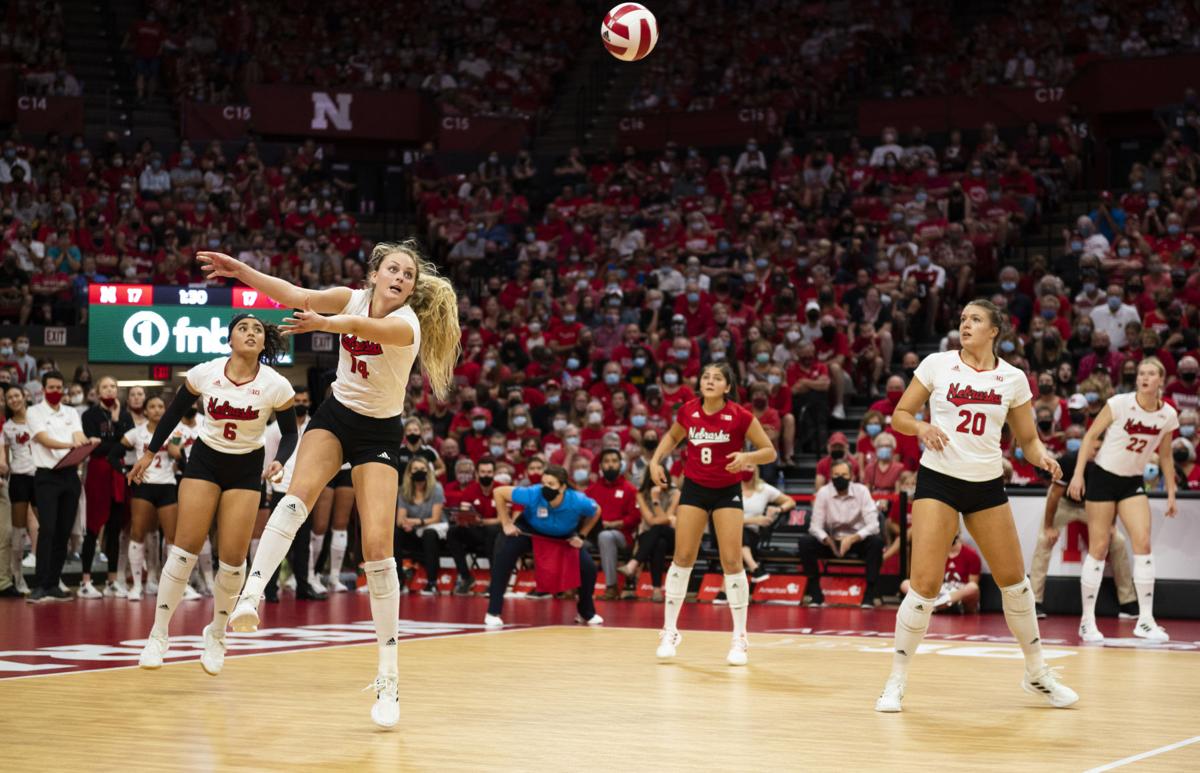 Nebraska's Ally Batenhorst (14) digs a ball against Louisville on Saturday at the Devaney Sports Center.

It was a milestone week for coach Dani Busboom Kelly and the Louisville volleyball team.

Over the past six days, the Cardinals reached their highest-ever ranking in volleyball (No. 5), beat rival Kentucky (the defending national champion) and beat one of the best teams in the nation (Nebraska) for the first time.

The Cardinals’ 10-0 record marks their best start to a season in the past 16 years.

Beating Nebraska is another sign of the improvement Louisville has made since Busboom Kelly — a small-town Nebraska product from Cortland, former Husker player and assistant coach — arrived in 2017. Louisville had lost all five meetings against Nebraska before Saturday.

After the match, Busboom Kelly got a hug from Nebraska coach John Cook and her former colleagues on the Husker staff. The Louisville players waved to their friends and families who filled the visiting section at the top of the arena.

Busboom Kelly knows one great week during the nonconference season won’t mean the Cardinals are going to win the ACC. But she likes that she’s got a team that has put in the work and plays with a belief that it can beat the top teams.

“I didn’t go to Louisville thinking, ‘Man, I want to beat Nebraska someday,'" Busboom Kelly said. "But it is a milestone. When you look at recruits and where they’re ranked, we have to work really hard and train great and be creative. We don’t (have) the No. 1 recruiting class in the country, but when we can go head-to-head and play that way, and player-for-player compete — that’s what I was working toward.”

Cook said Busboom Kelly’s team plays the way he likes his team to — with great serving, blocking and defense. Louisville had 12 blocks and held Nebraska to a season-worst hitting percentage of .046. Louisville hit .255.

“Obviously coming back here was pretty special,” Busboom Kelly said. “I love this place, and have a lot of amazing memories here. But it was awesome to bring a team that I was so confident in, and they’re so confident in themselves and get to challenge Nebraska. It was just really cool to see us rise to that challenge. You never know how a team is going to respond in this atmosphere, and being the favorite — which we are definitely not used to. It was great to see us respond and play great.”

The Cardinals played great at the end of each set, including an 8-1 run to end the match. Earlier in the week, Louisville beat Kentucky with a match-ending 9-0 run.

“We have another level when we decide it’s time to win the match. I don’t know how to describe it,” Busboom Kelly said. “I was really confident, and when Amaya Tillman got that block on Callie Schwarzenbach, I knew the game was over. That kind of took the wind out of the sail for Nebraska.”

Nebraska hit out five times down the stretch in the third set.

Middle blocker Anna Stevenson had a great match with 11 kills on .588 hitting.

Now Nebraska has lost three straight matches, which hadn’t occurred since 2018. Nebraska getting swept hadn’t happened since an NCAA Tournament loss to Wisconsin at the end of the 2019 season.

“Louisville completely outplayed us, and did everything," Cook said. “We did nothing to put any pressure on them. They played free, loose and aggressive. We just really did nothing. We did nothing to even compete like we need to. Why, I don’t know. Back to the drawing board, and we got three days until we start Big Ten.”

Nebraska co-captain Kenzie Knuckles gave credit to Louisville for being a great team. But she’s disappointed that Nebraska isn’t playing up to its capabilities.

“Just as a team, and as a unit, we have a lot of growing to do,” Knuckles said.

Nebraska went back to a starting lineup with Lexi Sun and Madi Kubik at outside hitter, and Lauenstein at right-side hitter.

But after Sun and Kubik managed just four combined kills on 19 attempts in the first set, they were replaced by Lindsay Krause and Ally Batenhorst. In the third set, Sun was back as a hitter.

But Nebraska’s middle blockers needed to be more productive, too.

“We hit (.046),” Cook said. “That’s a complete failure on our part — passing, setting, attacking. Everybody gets credit for that.”

Now in a few days Nebraska begins its 10-week march through the Big Ten, with its six ranked teams.

“Hell, yeah, I’m concerned,” Cook said. “But I also know this team can be really good. At some point it’s going to click.” 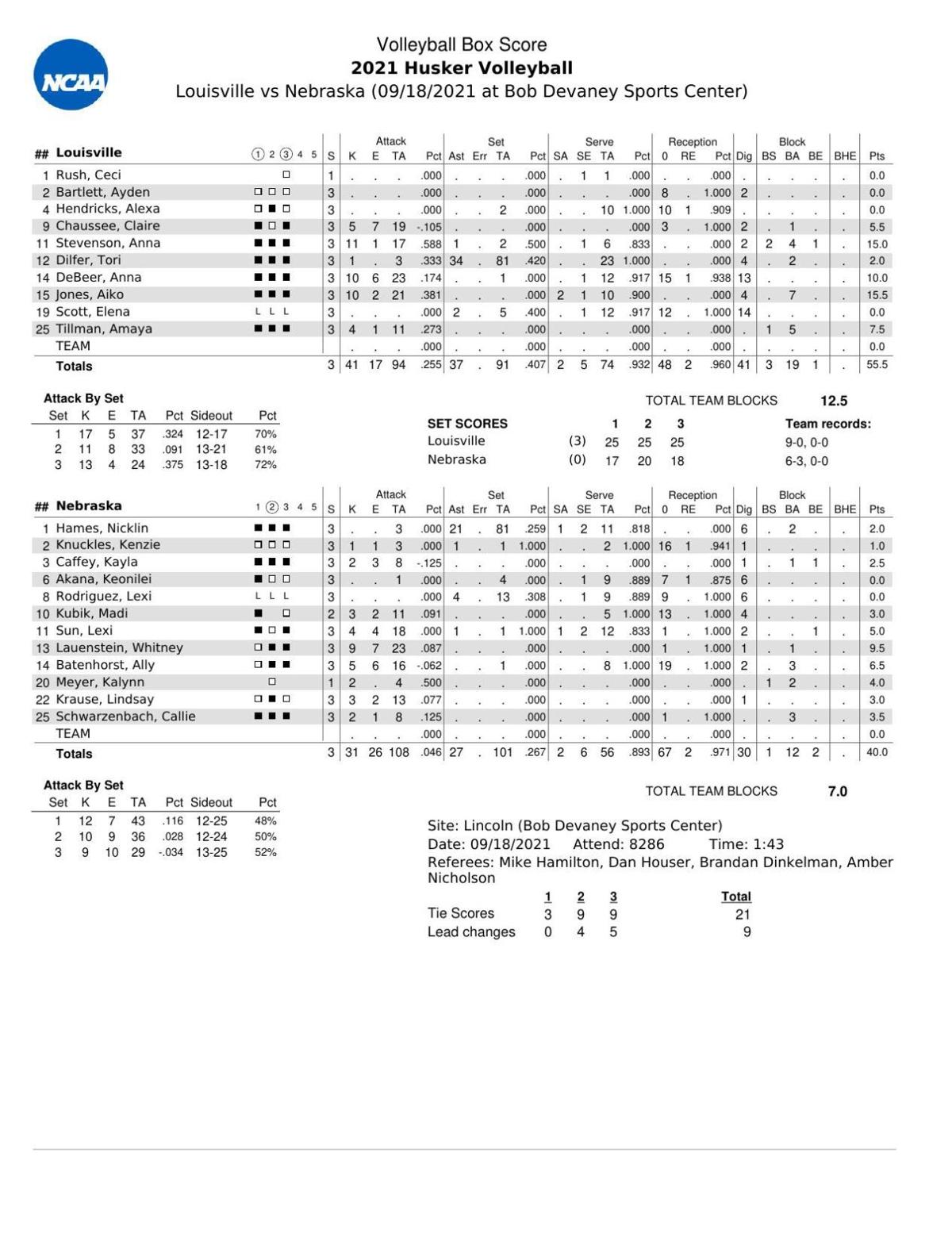 Photos: Huskers and Cardinals meet in a top-six clash at Devaney Sports Center

Next Saturday will be a big day for Huskers fans: volleyball at 2 p.m.; football at 6 p.m.

John Cook on the radio: Kubik's special skill, and a player-led caring gesture for a former teammate

Hitting the ball off the hands of a blocker is a skill the Huskers have worked on, one Madi Kubik utilized this week.

Nebraska's Ally Batenhorst (14) digs a ball against Louisville on Saturday at the Devaney Sports Center.