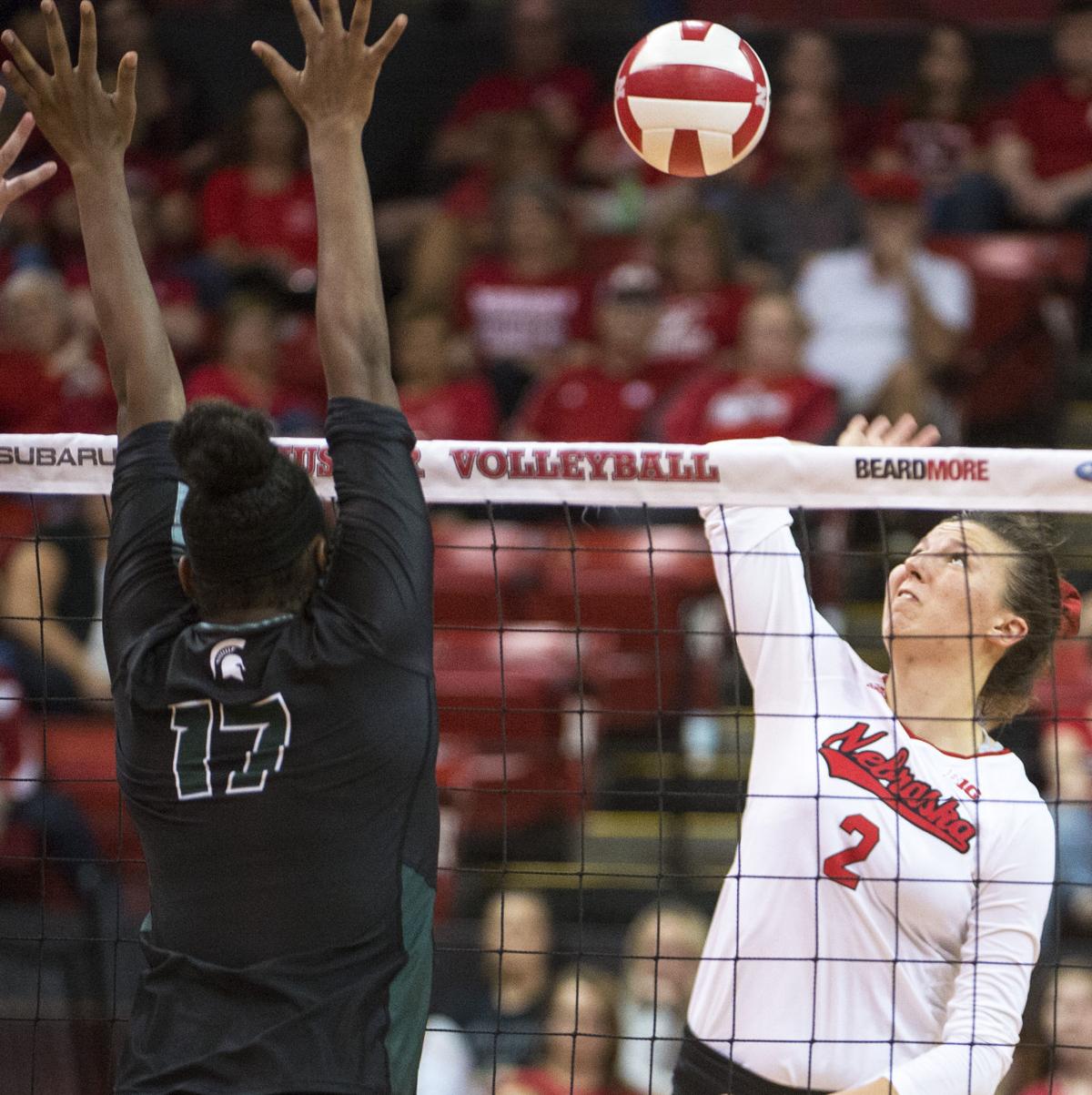 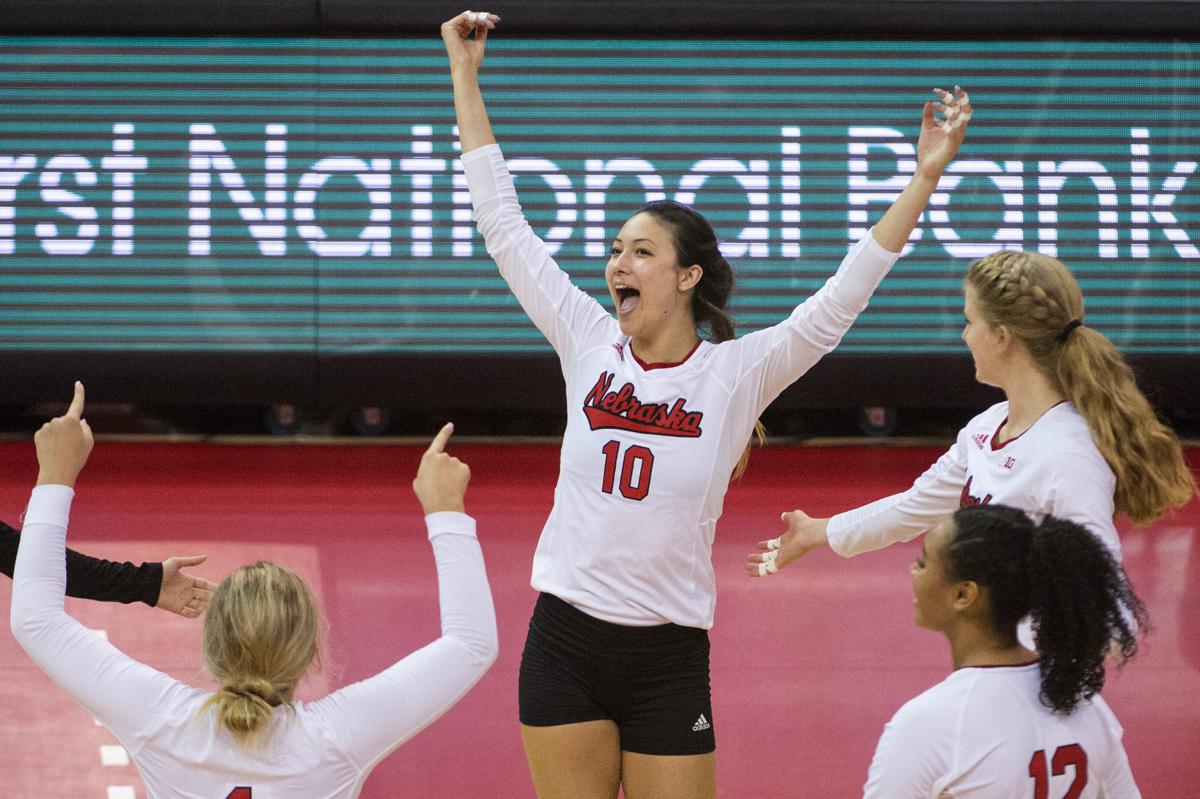 Nebraska's Lexi Sun (center) celebrates a point against Michigan State on Sunday at the Devaney Center.

In 2017, the Nebraska volleyball team had something of a rebuilding year after the Huskers graduated three All-Americans from the previous season, albeit a rebuilding year where the team still returned an All-American setter in Kelly Hunter, and ended up winning the national championship.

This year the roster leans heavily on its young players — three freshmen and four sophomores play a lot — but also includes two very good seniors to build around in Mikaela Foecke and Kenzie Maloney.

But no matter what the lineup has looked like over the past 365 days, the near constant has been that Nebraska wins a lot of volleyball matches.

Sophomore outside hitter Lexi Sun led the Huskers in kills with 15, and Foecke added 12. Maloney and the new setter, Nicklin Hames, helped lead the Huskers’ strong showing on defense with 17 and 16 digs, respectively. Lauren Stivrins had seven blocks.

Since losing it first match of the season, against Florida, Nebraska has won 11 consecutive matches, including a 2-0 start to the Big Ten season.

And if you look at the past 365 days, Nebraska has won 35 of its last 37 matches. The only other loss in that stretch came in four sets at Wisconsin on Oct. 11, 2017. Last year Nebraska ended the season on a 19-match winning streak to win Big Ten and NCAA championships. Nebraska’s record against ranked opponents during that span is 12-2.

Maloney, who has played on two NCAA title teams, says it feels great the way the Huskers have started the season.

“Eleven straight (wins) gives us a lot of confidence, especially starting off conference play,” Maloney said. “I think we have a really good feeling as conference goes on, especially because we’re going to keep playing tough teams."

Nebraska graduated All-Americans Annika Albrecht, Briana Holman and Hunter. What they’ve carried over from last season to this one, Maloney said, is a one-point-at-a-time mentality that served them well last year.

“That was huge for us last year,” Maloney said. “You know, win or lose the point it doesn’t matter you got to win the next one, and I think that’s carried over super-well, especially because it’s a young team, so it’s kind of hard to teach that sometimes. But I think this group of girls has done a great job of getting used to that mentality, and it’s been really successful for us so far.”

Nebraska’s serving has been high-error a few times, but remains a strength. When Nebraska beat Michigan on Friday, Michigan coach Mark Rosen said the Wolverines may not see a better serving team than Nebraska.

Serving is one of the areas where Nebraska coach John Cook has probably had his expectations exceed, considering how many new players the Huskers have.

“I think our block is better than I thought it would be,” he added. “And our floor defense, I wasn’t quite sure, but Nicklin is digging in (Kelly Hunter’s) spot, so Nicklin is a very good defensive player. Lexi is doing a nice job back there, Mikaela is solid and, of course, Kenzie. I feel like we’re probably better serve, block and defense than I probably thought.”

Nebraska had one bad set Sunday, relaxing a little bit after winning the second set 25-9. But even after the Spartans had a good third set, hitting .258, Nebraska still held the Spartans to a season-low .047 hitting percentage. Nebraska had 22 more digs and three more blocks than the Spartans (12-3).

Jazz Sweet continues to put down kills at a high level for the Nebraska volleyball team, and coach John Cook thinks there are signs that could…

Foecke, defense shine as Huskers knock Michigan from the ranks of the unbeatens

The Nebraska volleyball team has several players new to playing matches in the Big Ten Conference. But the Huskers also have Mikaela Foecke, w…

The first time that coach John Cook saw Lexi Sun hit a volleyball as a Nebraska player she was hitting soft shots while standing on a big, woo…

Hames' fire got her a warning, but Cook likes how freshman setter competes

We’re six weeks into the college volleyball season, and if you’re looking for signs that Nebraska could have another great season, it could be…

The Nebraska volleyball team passed its first test of a weekend road trip with a win against Northwestern, although not to coach John Cook’s l…

Nebraska's Lexi Sun (center) celebrates a point against Michigan State on Sunday at the Devaney Center.