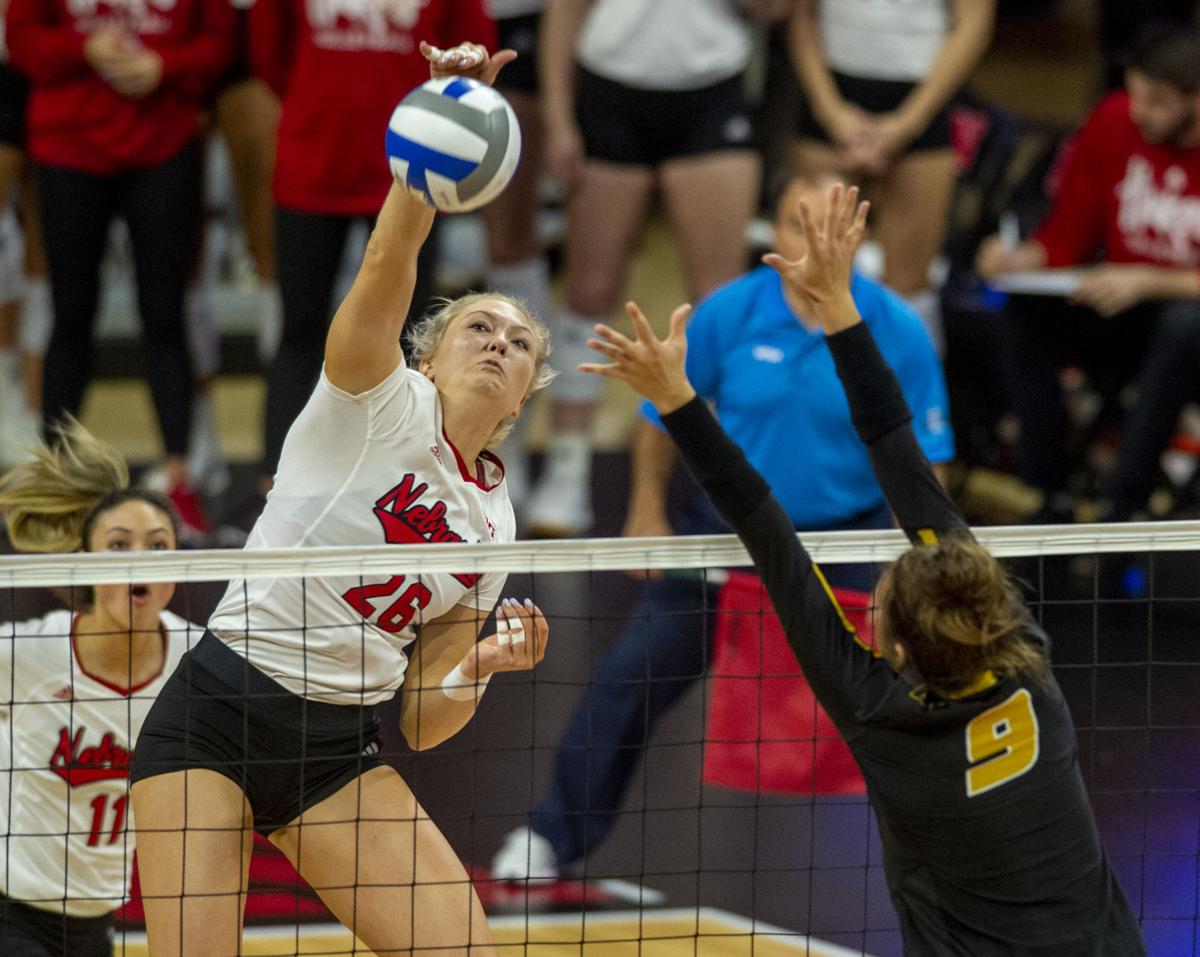 Nebraska’s Lauren Stivrins (26) rises for a spike as Missouri's Tyanna Omazic (9) tries to block in December during the NCAA Tournament at the Devaney Sports Center. Stivrins is among the Husker seniors who could return in the fall. 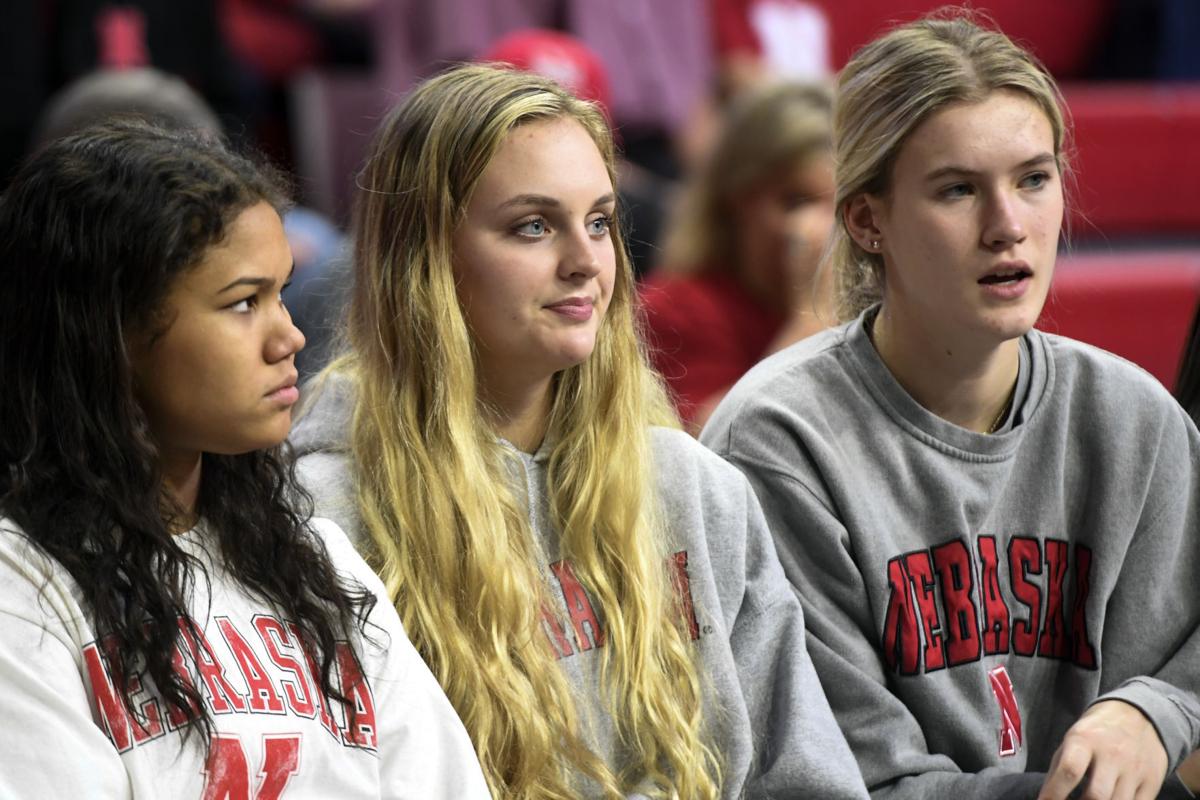 Nebraska volleyball recruits Kennedi Orr (left) Ally Batenhorst and Lindsay Krause sit on the Nebraska bench and watch warmups before a match in 2019. In rankings released by PrepVolleyball.com on Monday, Orr is the No. 1 recruit in the country in the 2021 class, Krause is No. 2 and Batenhorst is No. 3.

The Nebraska volleyball team's roster almost never ends up as it projects like it could several months out from the season's beginning.

Take last season, when Nebraska didn’t have any seniors on the team, and could have had most of the team back.

That didn’t happen, with Megan Miller, Capri Davis, Anezka Szabo, Chen Abramovich and Fallon Stutheit each transferring in the offseason.

And then Nebraska had some unexpected additions to the roster with graduate transfer Kayla Caffey, a standout middle blocker in the SEC while playing for Missouri, and freshman defensive specialist Keonilei Akana, the Hawaii high school player of the year who previously signed with USC.

But, whew, it’s wild to look ahead and think about what the Huskers’ roster could be in the fall of 2021, even if you know the odds aren’t good that it will look exactly like that.

Before then the Huskers are hoping to play in Big Ten matches and in a rescheduled NCAA Tournament sometime after January. That’s because the 2020 season was postponed from its regular slot in the fall due to COVID-19.

But the NCAA has already decided that fall sport athletes will maintain their currently eligibility for next season, meaning that seniors may have the option to come back in the fall of 2021 if the Nebraska Athletic Department allows it.

So Husker seniors Lauren Stivrins, Lexi Sun, Jazz Sweet and Hayley Desnberger could each return, although it’s unlikely that all four will.

And then a roster already loaded with several of the nation’s best players would be joined by what is projected to be the No. 1-ranked recruiting class in the country.

The other players in the recruiting class are Lexi Rodriguez (libero from Sterling, Illinois), Whitney Lauenstein (outside hitter from Waverly) and Rylee Gray (middle blocker from Elkhorn South).

So if the seniors stay, none of the underclassman transfer, and all of the high school seniors maintain their current recruiting ranking, Nebraska would have 11 top-20 national recruits on its roster in fall 2021: Sun, Orr, Krause, Batenhorst, Madi Kubik, Nicklin Hames, Stivrins, Rodriguez, Callie Schwarzenbach, Sweet and Lauenstein.

Nebraska coach John Cook recently said on his monthly podcast — hosted by his daughter, Lauren West, and produced by the Husker Sports Network — that it will be interesting to see how everything shakes out with the roster because of the eligibility changes.

But it’s intriguing to think of how much talent Nebraska could still have on its roster next fall.

“Our practices could be like Big Ten matches,” Cook said.

Cook doesn’t know what Nebraska’s seniors will decide to do.

“I think it’s going to be determined on what kind of spring season we have,” he said.

Stivrins, Sun and Sweet will each probably be weighing options for professional volleyball careers, and would have to remain a college student for 12 months longer than they had planned.

Those decisions could affect how many players Nebraska recruits for future classes. And some high school recruits make college decisions based on what starters will be graduated when they get to college.

“This is going to be roster management nightmares,” Cook said.

Worth quoting: “We had four great practices and then I get a call from (volleyball administrator Pat Logsdon) saying, ‘Hey, you either need to cancel practice or go light.’ I’m like, ‘Pat, we’ve never had a light practice in my entire coaching career. What do you mean light?’” — Cook on the week in August when the Huskers’ season was postponed.

* For college conferences that are planning to play in the fall, such as the SEC, teams will play eight matches in the fall, and then resume the season in the spring, which would allow them to play in a rescheduled NCAA Tournament.

* Nebraska stopped practicing when the season was postponed and allowed the players to go home for a few weeks, but is scheduled to resume a limited practice schedule this week, along with normal strength and conditioning workouts.

* Former Nebraska walk-on middle blocker Abby Johnson, who left Nebraska during the first week of practice, has transferred to Bradley, where she’ll have a chance to be on scholarship.

The Nebraska AD: "I'm confident as we sit here, without saying for sure, that Omaha will host that Final Four, and hopefully we're in it."

“Being a Nebraska girl and growing up here watching the Huskers is something that’s really important to me."

The Class B No. 6 Antlers pride themselves in their blocking, and that proved to be the difference Saturday against No. 2 Waverly.

He is the owner and operate of RichKern.com, which is a resource for college volleyball coaches, fans, media and sports information departments.

Half of the Huskers' recruiting class for next season, which is expected to be ranked No. 1 in the nation, will start their college careers early.

Whatever the obstacle for Nebraska volleyball player Keonilei Akana, she can think about how she overcame a major obstacle while recovering from having surgery to remove a brain tumor twice during high school.

The season's exact optics remain unclear (all-Big Ten schedule?) but John Cook and his team are feeling "a huge relief" about having a set start date.

In a few years, Lindsay Krause and Hayden Kubik might battle for a Husker starting spot. On Saturday, they squared off on the prep court.

In addition to landing the 2022 Final Four, Omaha was also supposed to have held the 2020 event, which was canceled by COVID-19's impact.

'Her termination is unheard of': Husker recruit Krause playing at All-American level for Omaha Skutt

Don't get Lindsay Krause wrong — she loves playing for the SkyHawks. But college is coming: “I think I’m just excited to play for my home.”

A Lincoln Police captain said that, as of Tuesday evening, Sweet had been cited only for the DUI.

“It’s different from home, but at the same time it’s the same. Like a small community,” the defensive specialist from Hawaii said of Lincoln.

Nebraska volleyball schedules scrimmage that will be shown online

The Nebraska volleyball team will have a Red-White Scrimmage on Thursday at the Devaney Sports Center.

Nebraska’s Lauren Stivrins (26) rises for a spike as Missouri's Tyanna Omazic (9) tries to block in December during the NCAA Tournament at the Devaney Sports Center. Stivrins is among the Husker seniors who could return in the fall.

Nebraska volleyball recruits Kennedi Orr (left) Ally Batenhorst and Lindsay Krause sit on the Nebraska bench and watch warmups before a match in 2019. In rankings released by PrepVolleyball.com on Monday, Orr is the No. 1 recruit in the country in the 2021 class, Krause is No. 2 and Batenhorst is No. 3.