Did the Nebraska volleyball team improve from last season? John Cook has some thoughts about that
0 comments
Share this
{{featured_button_text}}
1 of 2 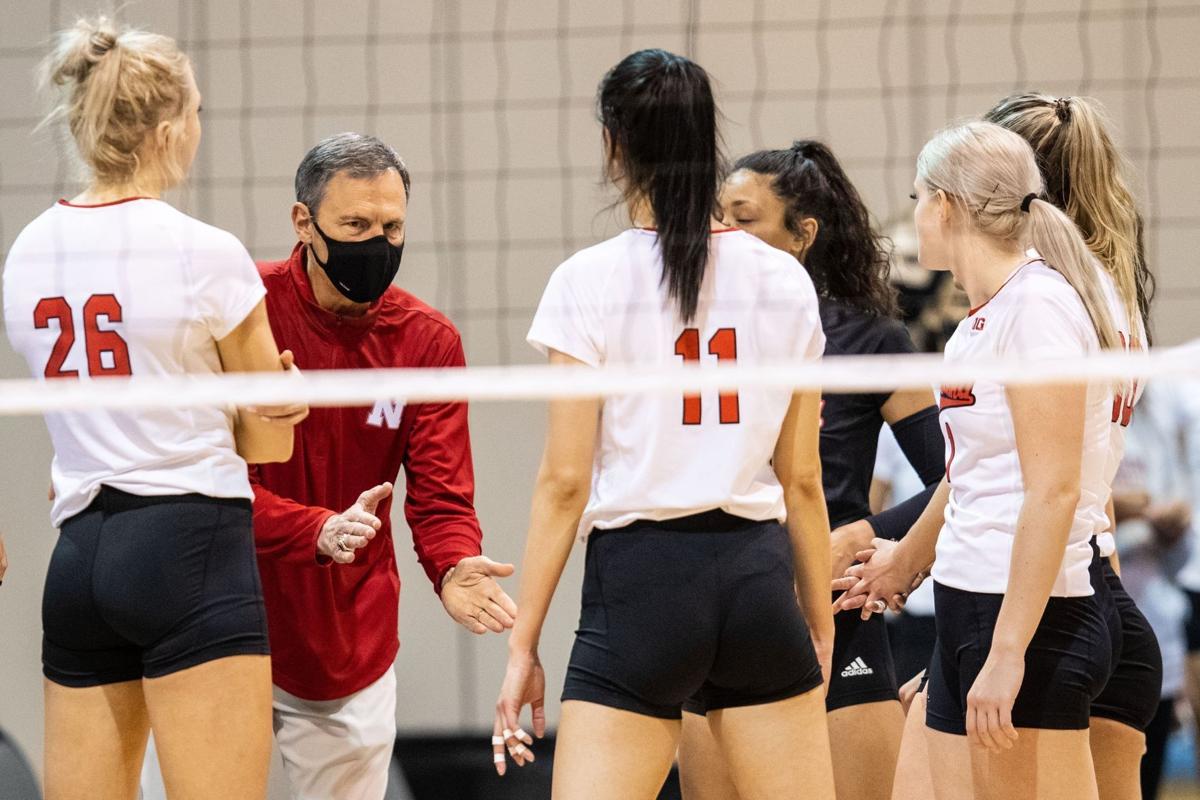 Nebraska coach John Cook talks to his team during a timeout against Texas State during the NCAA volleyball tournament Thursday at CHI Health Center Omaha. 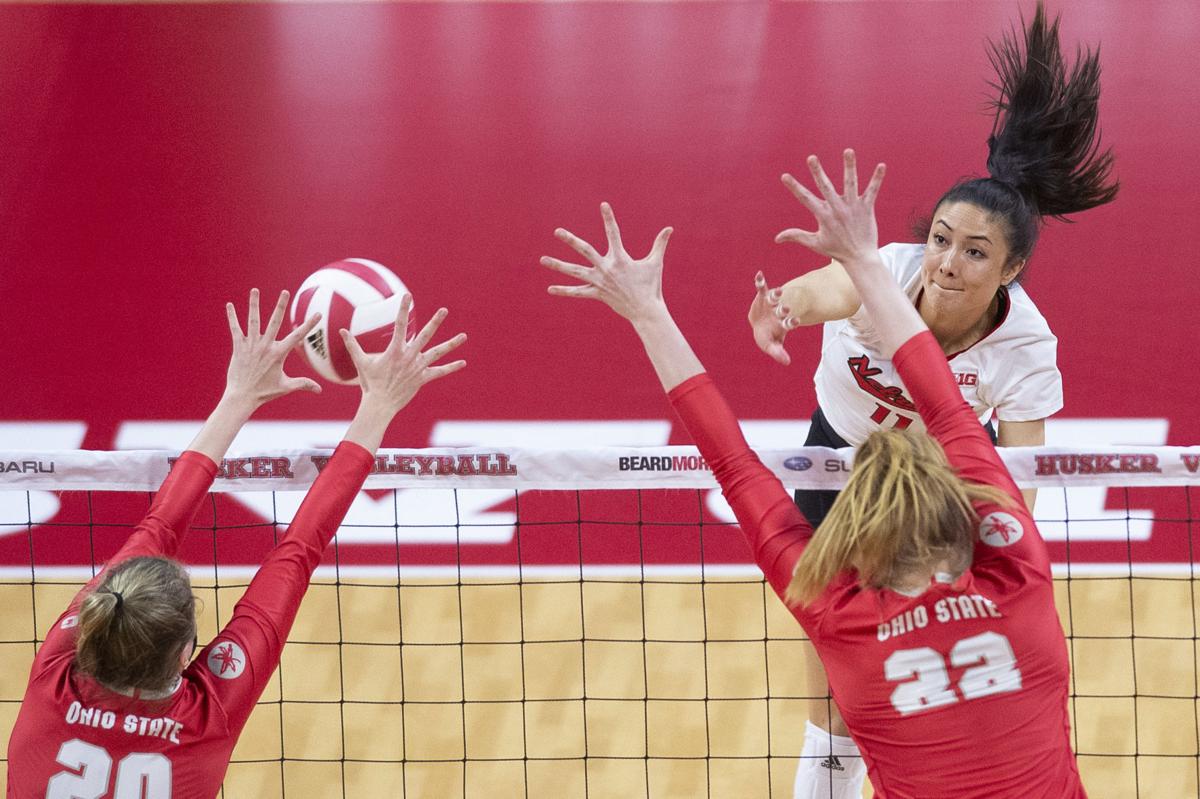 The Nebraska volleyball team you’re watching now was always viewed by some as a two-year team.

That’s because there were no seniors on the 2019 squad, and most of the key players were back this time around. Nebraska set out to be really good last season with an eye on how much better it could get the next year when the Huskers would take aim at playing in a fourth hometown NCAA Final Four in Omaha.

So, now that we’ve reached the crossroads of the season in the regional round of the NCAA Tournament, which team is better? The 2019 team, or the 2020-21 squad?

When you compare the two, the teams are pretty even — although it’s not a perfect study because of COVID-19's impact this season.

So the biggest deciding factor may come over the next two days, when we’ll see if this team can accomplish what the 2019 squad could not — reaching the Final Four. The first step is No. 4-ranked Nebraska’s match against No. 11 Baylor at 1:30 p.m. Sunday. The match will be televised on ESPNU.

With a win, Nebraska would play Texas or Penn State in the regional final Monday.

Nebraska’s NCAA Tournament seed (fifth) was the same each season. In the coaches poll, the 2019 team was ranked as high as No. 2. This season, Nebraska was ranked No. 4 or 5 the whole time.

Last season, Nebraska won 85% of its Big Ten matches, while this season that number was 88%.

But more than most seasons, Nebraska doesn’t have a great gauge on how good it is, in part because series against Wisconsin and Penn State were canceled because of COVID-19 issues on the opponents' ends.

If Nebraska plays as well as it did during a sweep against No. 5 Minnesota on Feb. 21 the Huskers should be in a great spot. The balance to that was how frustrated Cook was with Nebraska’s defense and sense of urgency during a five-set home loss against Ohio State last month.

Last season, Nebraska came up one win short of the Final Four after getting swept by Wisconsin in the regional final in Madison, Wisconsin. This season Nebraska won't have to win a regional on the home court of its opponent, and instead the Huskers would be playing in front of about 4,000 supporters in Omaha.

The Huskers didn’t lose any starters from last season and then added some great additions to the roster with middle blocker Kayla Caffey and defensive specialist Kaylei Akana. Now Nebraska always has a major offensive threat in the middle.

Nebraska’s offensive statistics are down slightly from last season, with the hitting percentage against Big Ten teams dropping from .283 to .272.

The opponent hitting percentage was exactly the same (.157). Ace serves per set improved from 1.00 to 1.50 and blocking is up a little.

Once a match has been going for a while, how you can gauge what kind of day it may be for the Huskers? Nebraska’s serve-receive is probably the thing to watch, Cook said.

“If we’re passing well and get Nicklin in a good rhythm, that’s our X-factor,” Cook said. “I think we’re pretty good at block and defense. The key is how we side out and how we transition to offense.”

During Nebraska’s sweep of Texas State in the second round, the Huskers had their best serve-receive efficiency of the season. Nebraska only had four or five breakdowns in that area over 57 attempts, including getting aced twice.

And if right-side hitter Jazz Sweet can get kills and limit her errors, well, that’s another key factor in how far the Huskers will go.

At one point in the season, Sweet’s season hitting percentage was just .103. But in the five matches since Riley Zuhn got injured and the position was all Sweet's, she’s got 43 kills and is hitting .403.

“For a while there we were losing matches because we had no right-side attack,” Cook said. “Your right sides have to be able to get big kills and hit for a good number.”

Nebraska's next NCAA volleyball tournament match will be on TV

The Huskers will play Baylor in Sunday’s third-round match at 1:30 p.m., one of four Sweet 16 matches selected for TV.

'We proved a lot of people wrong': Without Stivrins, Nebraska sweeps into regional final

“I think a lot of people were skeptical ... as to how we were going to show out without Lauren, and I think that everyone stepped up."

Elite Eight primer: Once again, Nebraska and Texas set for a massive match in Omaha

The Huskers will be making their ninth straight Elite Eight appearance on Monday when they take on Texas. Brent C. Wagner previews the match.

Five days into the shrunk-down NCAA Tournament and we’re down to eight teams. Here’s how things stand in Omaha.

Nebraska coach John Cook talks to his team during a timeout against Texas State during the NCAA volleyball tournament Thursday at CHI Health Center Omaha.