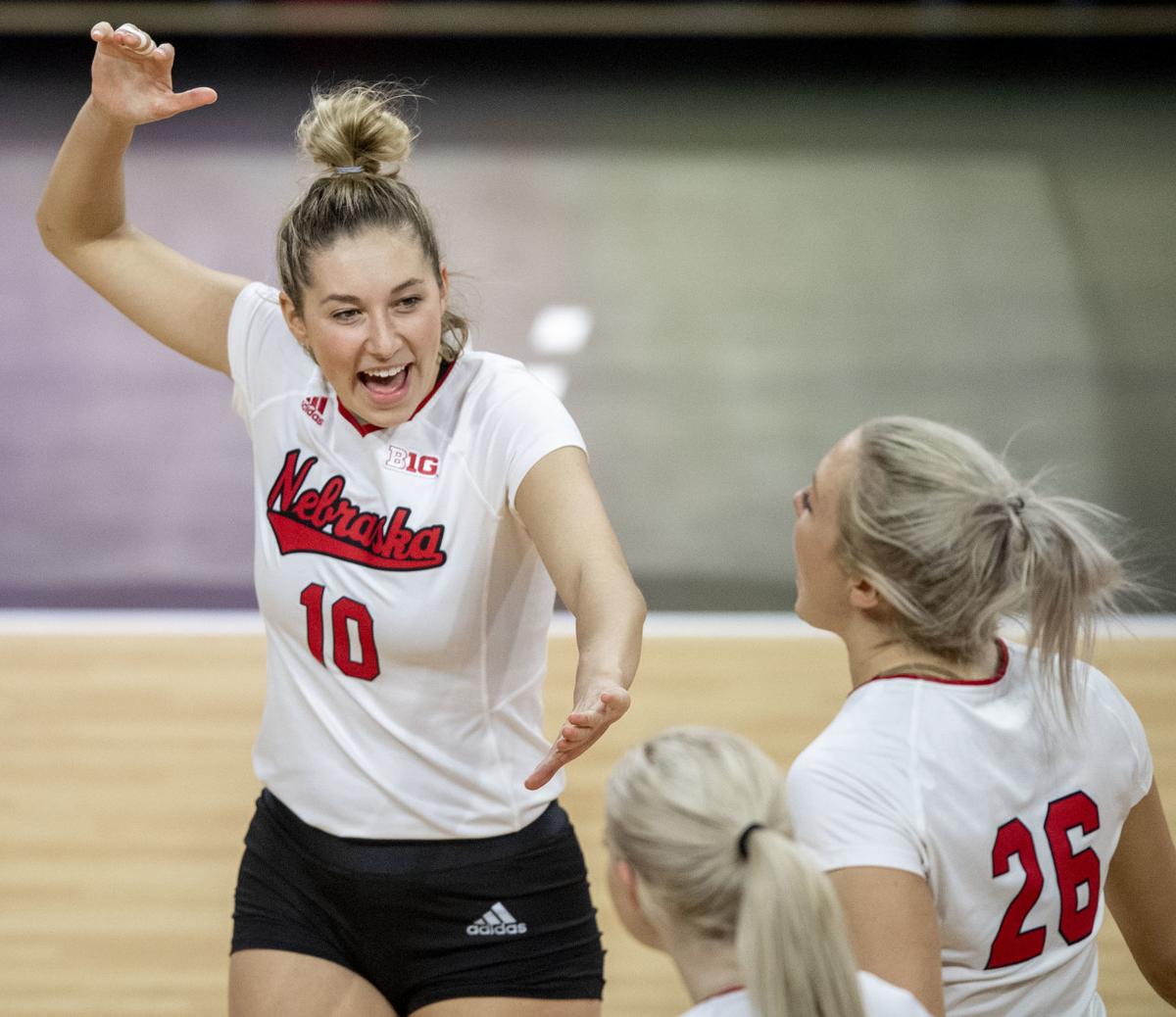 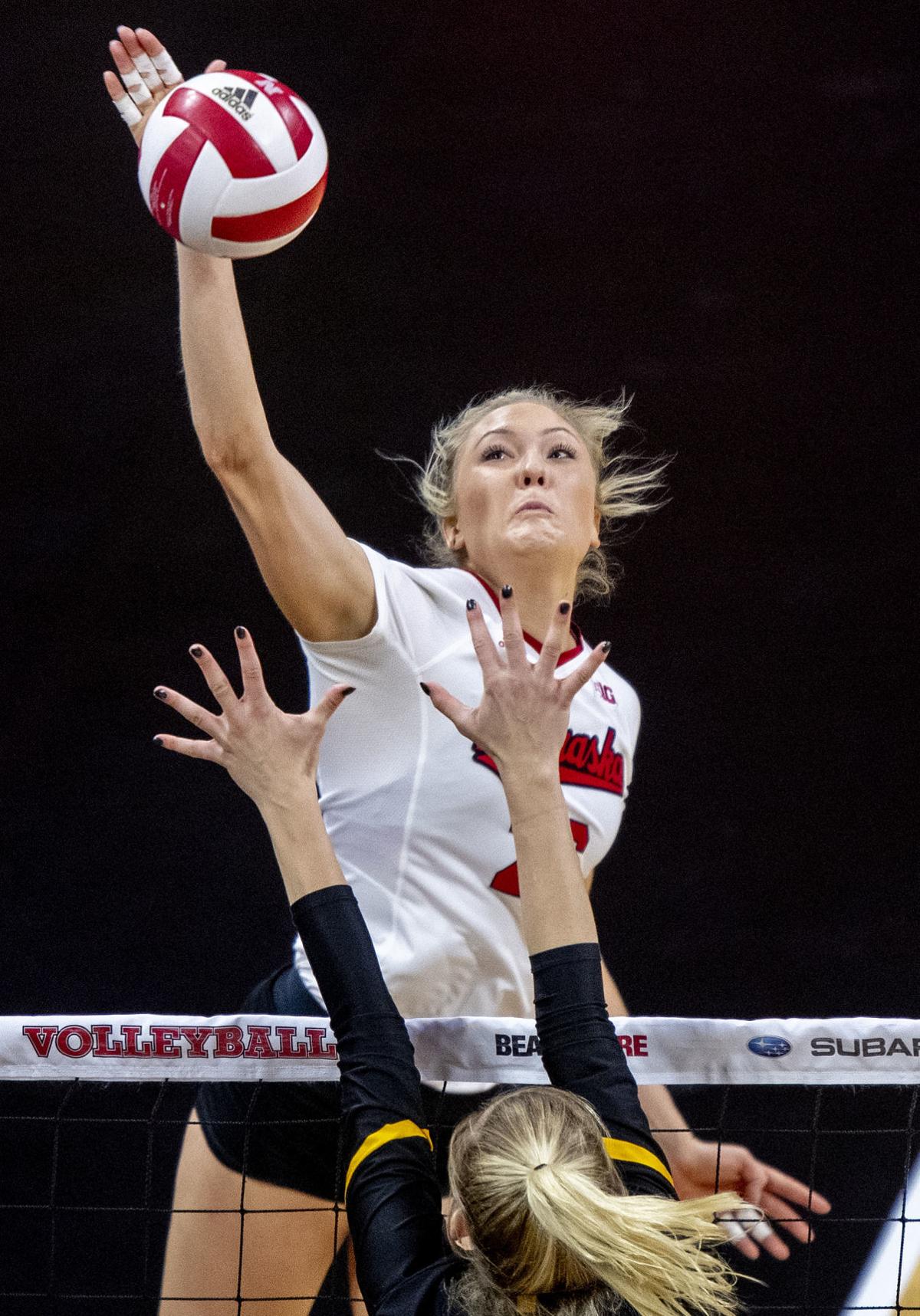 Nebraska’s Lauren Stivrins goes up for a first-set kill against Iowa on Saturday at the Devaney Sports Center. 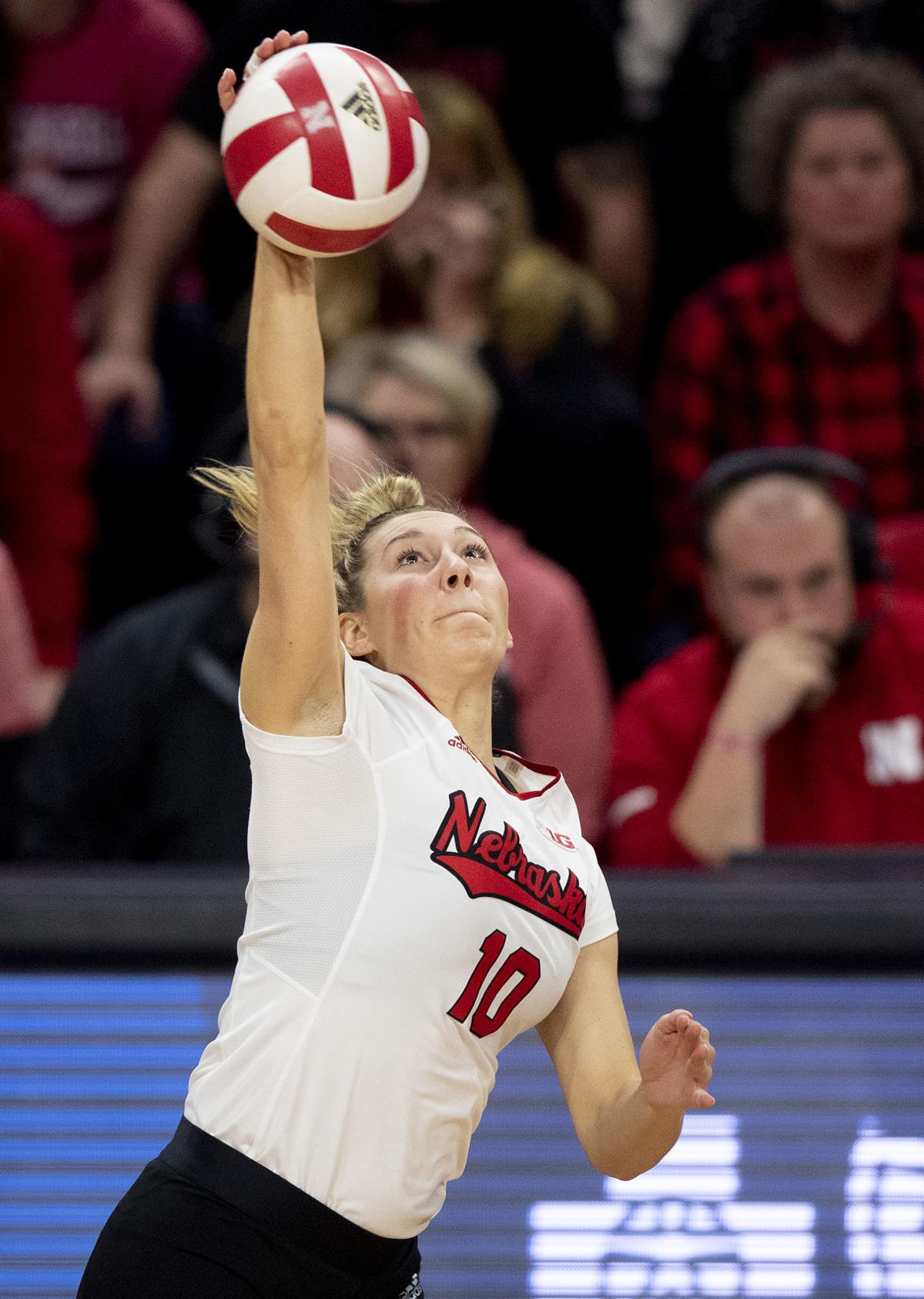 Nebraska’s Madi Kubik attempts a kill in the fifth set against Iowa on Saturday at the Devaney Sports Center.

At about 8:45 p.m. Saturday there was a warning light flashing on the Nebraska volleyball team’s chances of winning a Big Ten championship this year.

Iowa, the unranked team with a losing record and a few injured players and a fraction of the volleyball tradition of No. 6 Nebraska, had taken a 2-1 set lead against the Huskers at the Devaney Sports Center.

Iowa, the team that has never beaten Nebraska in 32 all-time matches. Oh, yeah, Nebraska had swept the Hawkeyes just one week earlier in Iowa City.

But that’s volleyball in the Big Ten, Nebraska coach John Cook often says. If you don’t show up and play well, you’ll get beat, no matter your ranking.

Iowa showed up, matching the Huskers in kills in the first set, and then getting four blocks in the second to win that set. Then the Hawkeyes went and won the next set, too.

And so with four matches left in the Big Ten season, Nebraska (22-3, 14-2 Big Ten) is still tied for second place, just one match behind Wisconsin. The Huskers have the biggest week of the Big Ten season coming up with matches against No. 5 Minnesota and No. 7 Wisconsin.

The feeling in the locker room after the match was one of relief, but also excitement.

“I just think that after it, it’s exciting,” said Husker right-side hitter Jazz Sweet. “We’re one step closer to being able to take that Big Ten title away from Wisconsin. We got to apply a lot of the things that we were working on this week. I think it was happy, but also we felt really satisfied that we could do some of the things that we’ve been training this week.”

Sweet had 18 kills with a .417 hitting percentage. She was outstanding in the fifth set, with four kills on six attempts, and the kills helped Nebraska get a quick lead in a set the Huskers never trailed.

“I just tried to give any push I could,” Sweet said. “If that was offensively or defensively. On the block, whether that’s slowing the ball down, or putting a ball down. That’s a huge momentum shift and a push, and it really drags the other team down.”

Freshman outside hitter Madi Kubik had 19 kills, giving the Huskers a boost when Lexi Sun was struggling in the first few sets. Sun had eight kills and a negative hitting percentage on 48 attempts.

Lauren Stivrins added 15 kills on .542 hitting for the Huskers. Callie Schwarzenbach tied her career high with nine kills, and also had five blocks.

Nebraska played at a much higher level in the fifth set, getting kills on nine of 15 hitting attempts with no hitting errors for a .600 hitting percentage. Nebraska also had two blocks in the fifth set.

Cook said the Huskers were good at everything in the final set, and Nebraska’s tough serving didn’t let Iowa get an easy hitting attempt.

In the fifth set, Nebraska charged out to a 4-1 lead, including two blocks from Schwarzenbach. Nebraska’s lead reached 8-4 on Sweet’s fourth kill of the set, and Iowa never got closer.

The Huskers committed seven net violations in the match, showing a lack of focus at times. But Iowa played at a much higher level than it did last week against the Huskers.

“They were just playing really fearlessly, and going after it and taking big rips at the beginning of the match,” Kubik said. “I don’t know if we were thinking we had to have the same mindset at the beginning, but I feel like through the match we started to play more fearlessly.”

The third set, won by Iowa 27-25 to take a 2-1 match lead, was wild one. Iowa went on a 5-1 run late in the set to take a 24-20 lead. But Nebraska somehow fought off three set points, and then took a 25-24 lead. Kenzie Knuckles served the pressure-packed run, including one ace.

But on Nebraska’s first set point chance, Knuckles’ serve sailed long, and after all the work the Huskers had done, the set was tied again. Iowa won the final three points to win the set 27-25 and take a 2-1 set lead.

There’ll be a lot for the Huskers to learn from this match, Cook said, but the players should be proud. Nebraska never trailed in the final two sets.

“I was pleased with how we responded in games four and five,” Cook said. “We could have really tanked set four after the way we lost those two deuce games.”

There are other college volleyball coaches than Nebraska’s John Cook that many people would recognize.

Freshman outside hitter Madi Kubik had 16 kills with an above-average .306 hitting percentage to help lead the Nebraska volleyball team to a 2…

The race for the Big Ten conference title in volleyball suddenly looks a little different after last week. Nebraska is now just a week away fr…

'It’s hard to find athletes like that': Superior's Meyer showed Cook enough to earn chance to play for Nebraska

Head volleyball coach John Cook talks about upcoming road games against Minnesota and Wisconsin during a news conference on Nov. 18, 2019.

Nebraska’s Lauren Stivrins goes up for a first-set kill against Iowa on Saturday at the Devaney Sports Center.

Nebraska’s Madi Kubik attempts a kill in the fifth set against Iowa on Saturday at the Devaney Sports Center.