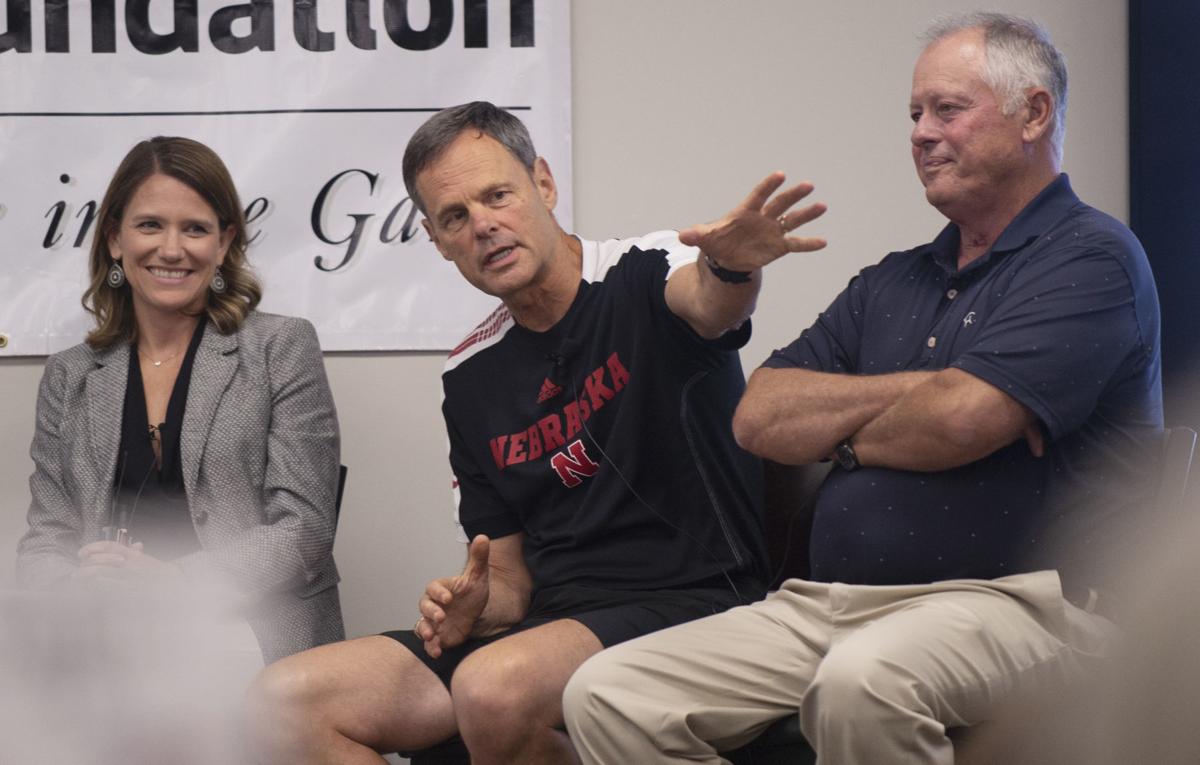 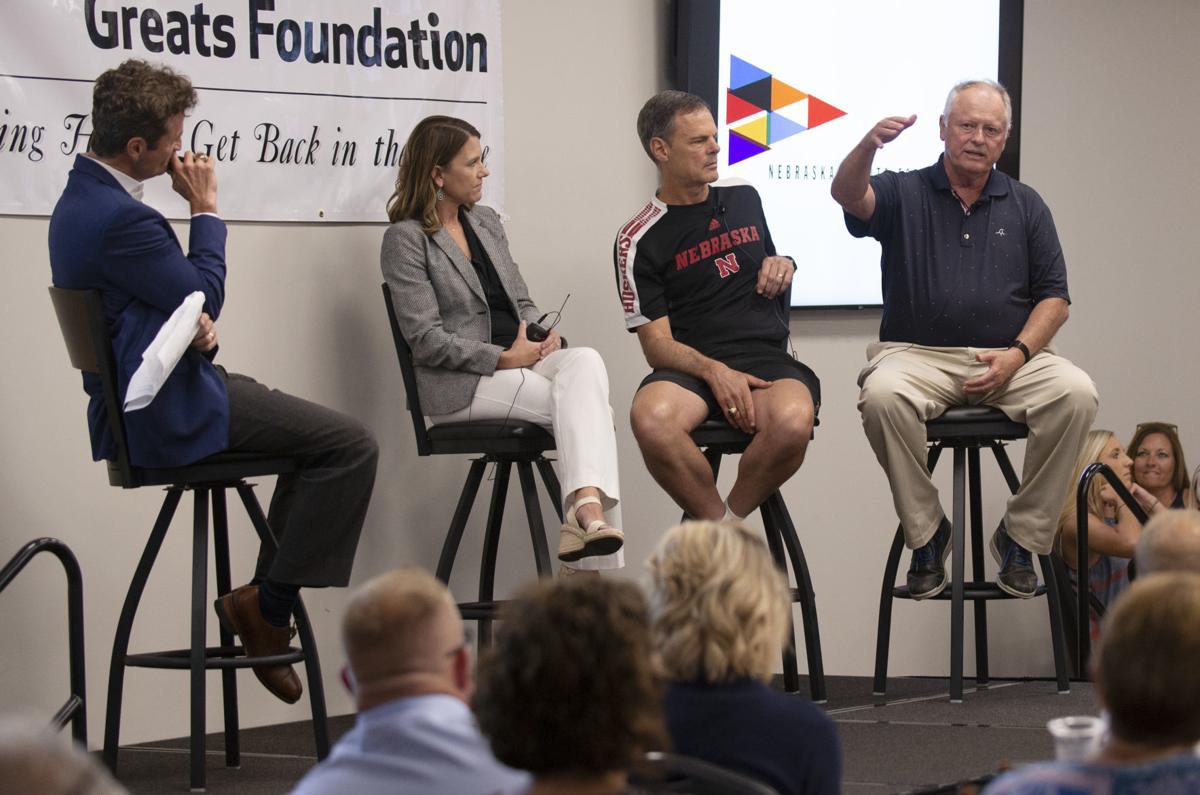 The program has had just two head coaches in the last 42 years, and it’s a combination that has produced a remarkable amount of success with 33 conference titles and five national championships.

Terry Pettit got the program on the path to overwhelming success as head coach from 1977 to 1999, including the first national championship season in 1995.

Current coach John Cook took it from there, and made it even better. Last season, Cook coached the Huskers in a national championship match for the sixth time in his 19 seasons as Nebraska head coach -- he coached the Huskers to national titles in 2000, 2006, 2015 and 2017, as well.

Pettit and Cook shared a stage and were joined by Creighton coach Kirsten Bernthal Booth on Thursday, sharing stories, a few jokes, and parts of the formula for why volleyball is successful and adored in this state. The storytelling session with the coaches was part of A Night of Nebraska Volleyball, a fundraiser for the Nebraska Greats Foundation.

Bernthal Booth turned Creighton into a top-25 program. In 2003, she took over a program that had a 3-23 record the previous season. But since then, the Bluejays have played in the NCAA Tournament eight of the last nine years, including making the Elite Eight in 2016.

The foundation provides financial assistance for former athletes who competed at any of the 15 four-year colleges in Nebraska and who, as a result of a medical issue, have exhausted both their insurance and personal resources.

The event sold out with a crowd of about 300. Special awards were given to Rose Shires, who recently retired as UNO's coach; Matt Buttermore, who replaced Shires at UNO but before that coached Hastings to a national championship; and UNK coach Rick Squiers, who led the Lopers to a national runner-up finish in 2005. Shires coached UNO to a NCAA Division II national championship in 1996.

Pettit quit coaching when he was still in his 50s. Pettit told the crowd he wanted time to pursue other interests, but he had also thought about who would follow him, and he wanted it to be Cook. Cook had previously been an assistant for Pettit at Nebraska, but at the time was the head coach at Wisconsin.

“I probably pushed it ahead a year or two because I felt John was the best person for it, and I knew if he continued that he would get a team to the Final Four and Wisconsin would wake up and we would have difficulty getting him back,” Pettit.

Cook knew it was a big job to follow Pettit, but wanted to see how he could do.

Each of the coaches said the success of college volleyball in the state starts with great high school and club coaches, several of whom are still coaching in Nebraska.

Pettit noted that from 1986 to 2008 most four-year players at Nebraska played in at least one Final Four. Pettit joked with Cook about a Final Four gap for a few years, but now the Huskers have been there four straight years.

“You have to have great players, and this state has had great athletes, and probably 50 percent of Nebraska’s teams have been local kids from the state of Nebraska,” Pettit said.

In her remarks, Shires said it was amusing to her when parents put basketball hoops in the driveway, but then kids used the backboards to practice serving a volleyball.

The coaches also took questions from the crowd. Cook was asked about the recruiting conversation he had with his daughter, Lauren, who as a college freshman left Lincoln to play volleyball for UCLA. He said it wasn’t much of a conversation because Lauren said she wasn’t going to Nebraska. But after one season at UCLA, she transferred to Nebraska.

“I think it’s a great story because I think for her she felt like she had to prove that she could play somewhere before she could play here,” John Cook said. “But also she realized when you grow up around this here and how important volleyball is and she went to UCLA where nobody cared, nobody went to the games, it wasn’t in the media, and she’s like, ‘OK, this wasn’t what my dream was to play volleyball in college,’ so she came back.”

Bernthal Booth has had opportunities to coach at schools in the major conferences, but she likes that volleyball is a big deal in Omaha, and she feels supported at Creighton.

“I do want to win a national championship, and we talk about that in recruiting,” Bernthal Booth said. “I’m sure a lot of people laugh at that, but we feel like we can take steps forward, and a couple of players in volleyball can change that, and that’s the ultimate goal.”

Most Intriguing Huskers: No. 13, Noa Pola-Gates

It's difficult to not be intrigued by Noa Pola-Gates considering what Nebraska secondary coach Travis Fisher said about him earlier this week during an appearance on the Husker Sports Network. “He’s a freak,” Fisher said. “You can put him all over the field."

"There's just a really good balance," Nebraska quarterback Adrian Martinez said of his relationship with Scott Frost and Mario Verduzco. "Coach Frost is more of a laid-back guy. Verduzco, I wouldn't necessarily describe him as laid-back. But they're both super-knowledgeable about the game of football. They can come at you from different perspectives and offer a lot of input on any topic."

Concordia improves to 2-0 in pool play at NAIA Tournament