Senior outside hitter Lexi Sun had a match-high 14 kills to lead the Nebraska volleyball team to a 25-19, 25-21, 25-11 victory against Iowa on Wednesday in Coralville, Iowa.

Sun had a .333 hitting percentage, and her strong all-around match also produced team-high marks in digs (12) and ace serves (two).

Sweet started at right-side hitter for just the third time this season and had a good match as coach John Cook keeps working to get the Huskers more production from that position. Sweet had two hitting errors on 12 attempts for a .417 hitting percentage.

Nebraska had a season-best .356 hitting percentage, improving on its previous best of .337 against Maryland, and held Iowa (3-12) to .119 hitting. Nebraska had 20 more kills than Iowa, outpacing the Hawkeyes 49-29 in that category.

Once they improved its serve-receive late in the first set, the Huskers were able to get the ball to Hames in a good spot. In return, she facilitated some great attempts for the hitters.

"Once we were getting Nicklin the ball in a good spot then she can do her thing," said Cook on the Husker Sports Network.

In the first set, Iowa was right there with the Huskers before Nebraska won 10 of the final 12 rallies in the set for a 25-19 win. Freshman Kaylei Akana served an ace serve on set point.

The Huskers carried the momentum to the second set when Stivrins served a 5-0 run for a 7-2 lead in a rare appearance at the service line for Stivrins, who finished with one ace.

"(Stivrins) made a great one-arm dig," Cook said. "She’s one of our best competitors and we want to give her as many chances to compete as we can. It was good to see that tonight. We’ll keep working on that."

Nebraska dominated the third set, turning in 14 kills on 28 attempts.

"I thought things started rolling in our favor set two, and then set three we got them really good," Cook said.

After a frustrating five-set loss last Saturday against Ohio State, Cook was pleased with the past two days of practice.

"They showed good resilience and bounced back and came in wanting to get better and improve on things," he said. "Some of the things we did in practice Monday we saw today in the match, so that was really, really good. You want teams that want to get better."

Nicole Drewnick, a backup setter for the Huskers, has left the program and plans to resume her college career elsewhere. Her name has been added to the NCAA transfer portal, Drewnick confirmed to the Journal Star on Wednesday evening.

Before Nebraska’s season began in January, Drewnick opted out for the season, a move afforded to players while the season is played during the COVID-19 pandemic. The sophomore from Dallas has not been with the team since.

Drewnick graduated from high school a year early to be the Huskers’ backup setter in 2019. She played primarily as a serving substitute that season and finished with two ace serves and 10 assists. 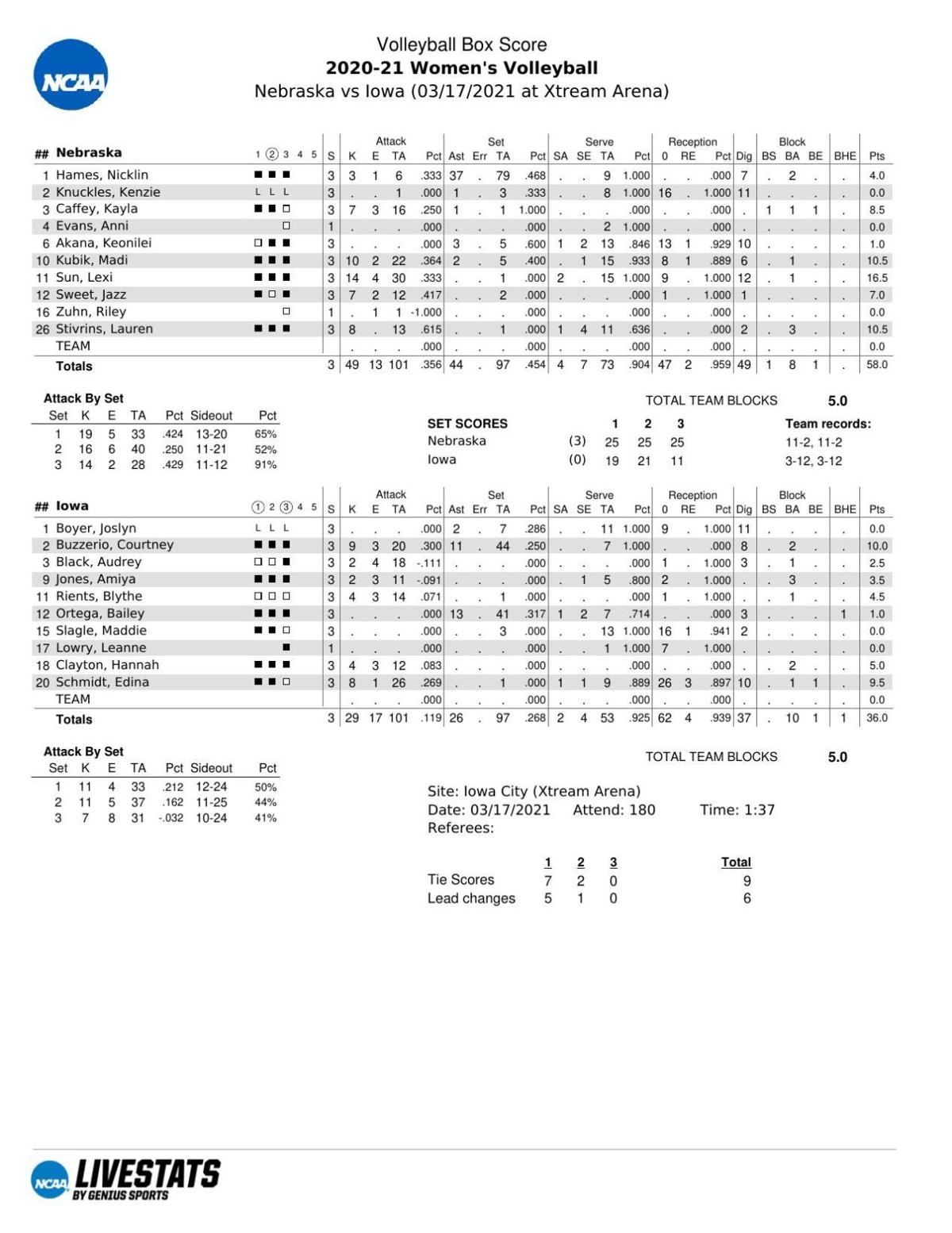 What's it like playing in an empty Devaney Center? Huskers, Cook have learned to adjust

For the first time in decades, the Huskers are playing home matches without thousands of fans watching due to Big Ten rules in place due to COVID-19.

An injury to Riley Zuhn frees up the logjam at right-side hitter, which will likely belong to Jazz Sweet as the Huskers enter a key stretch.