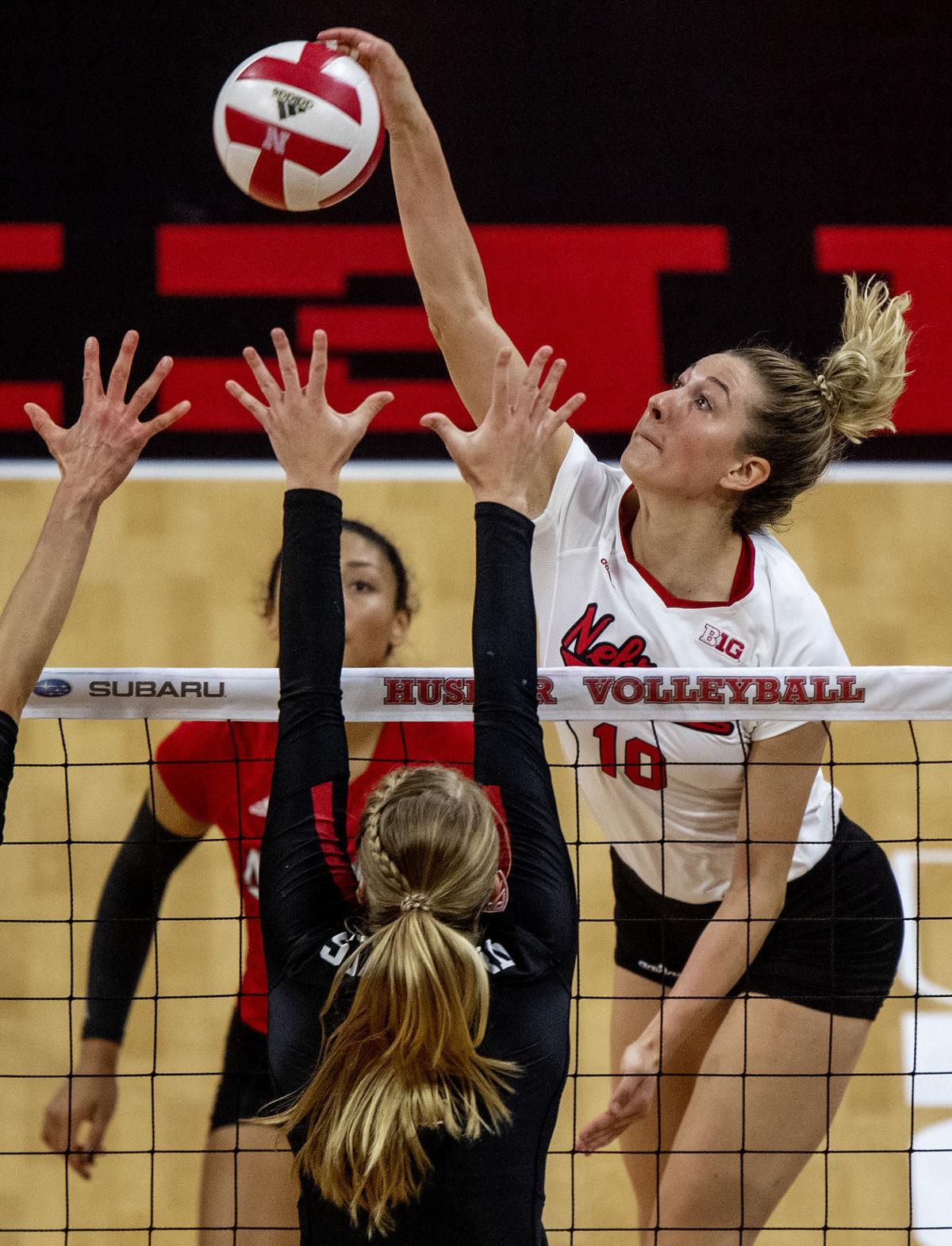 Freshman Madi Kubik, here on the attack against Stanford in September, has stepped up lately in Big Ten play. 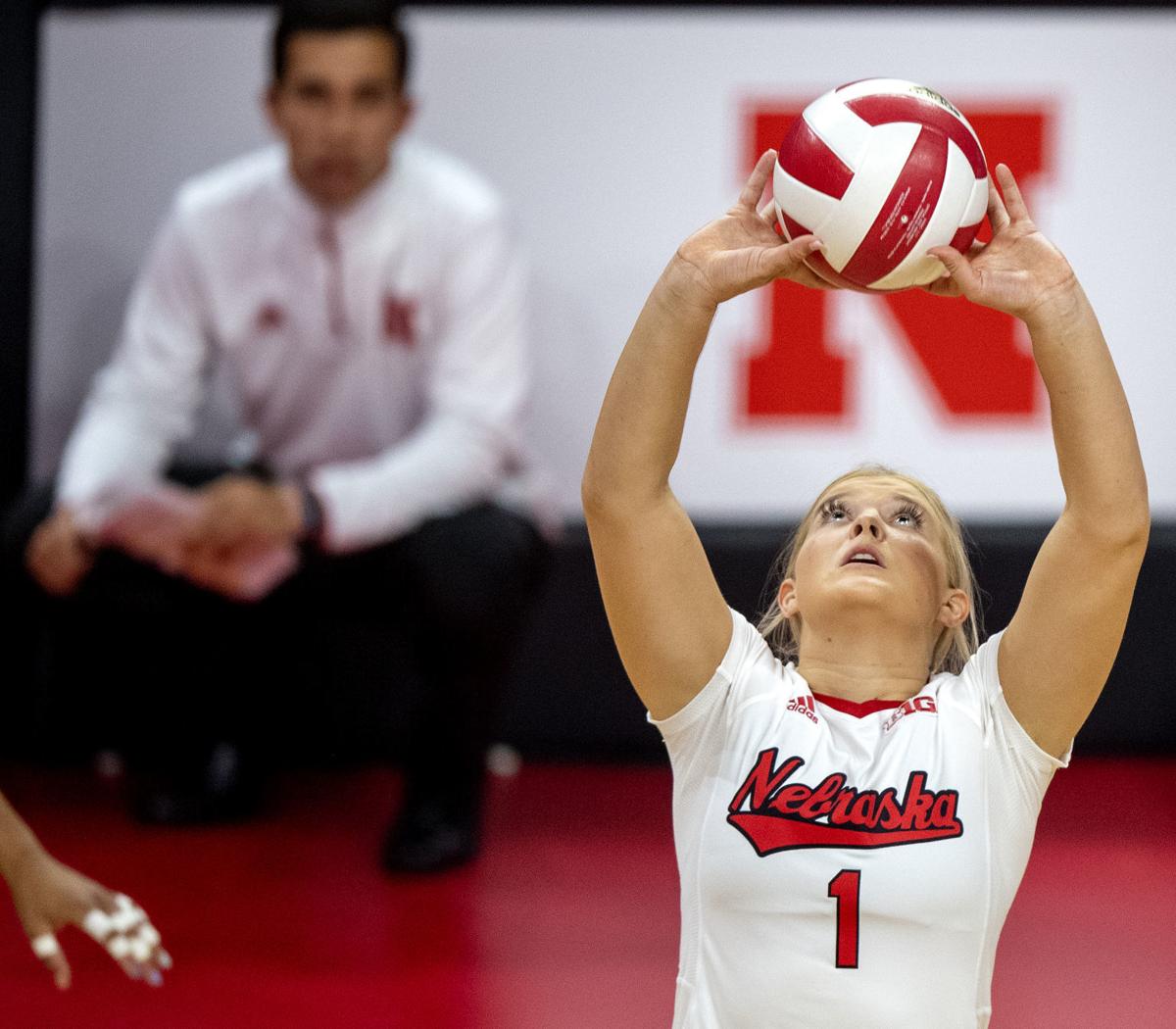 Nebraska’s Nicklin Hames sets the ball against Purdue on Oct. 16 at the Devaney Sports Center.

The Nebraska volleyball team is known for its defense, and that’s probably not changing.

But the Huskers are also looking impressive on offense while inching closer to becoming a more complete team.

Nebraska’s offense has improved over the past month — and the team now has leading marks atop the Big Ten Conference in both offense and defense to show for it.

Nebraska’s hitting percentage of .294 is just ahead of Wisconsin (.286) and its scary-good offense. The Huskers, when factoring the entire season, ranks No. 4 nationally in defense with a .137 hitting percentage.

The mix of improved offense and almost-always-there defense has Nebraska tied for second place in the Big Ten standings with a 7-1 record. Wisconsin leads the conference at 8-0. At No. 5 in the coaches poll, Nebraska is still the highest-ranked Big Ten team.

Nebraska will play two matches on the road this weekend: Indiana on Friday and No. 20 Purdue on Saturday. It will be the second time in two weeks Nebraska and Purdue have played, with Nebraska winning the previous match in four sets.

Nebraska has turned in five of its best offensive matches of the season over the span of the last seven contests despite the competition level trumping the nonconference slate.

Nebraska had its season-best hitting percentage of .468 against Rutgers. It also hit .284 against Purdue.

It was this kind of improvement that Nebraska coach John Cook was hoping for in the second half of the season with the Huskers having two freshman starters, outside hitter Madi Kubik and libero Kenzie Knuckles, who are growing accustomed to college volleyball.

Kubik’s most efficient hitting matches have come in Big Ten play. Kubik had just a .158 hitting percentage during the nonconference season, but is hitting .255 in league play.

And, of course, it helps an offense operate at a high level when it has a player like All-America middle blocker Lauren Stivrins. She’s hitting a Big Ten-leading .517 in league matches.

It’s all working together to put Nebraska’s offense on the rise.

One of the reasons for Nebraska’s improved offense is being better in serve receive, which leads to better hitting attempts.

“We’re passing a little bit better, we’re ball-handling better, our transition numbers are really up, which means we’re digging the ball where we can score points,” Cook said. “We call it first contract. Our first contact has gotten better as the season has gone on. That’s probably the biggest reason.”

Knuckles is proud that better passing is helping the hitters.

“It feels great, honestly, just because coach always talks about how serve and pass is where the game starts,” Knuckles said. “So I just know when we can get a good pass we can give our hitters opportunities.”

Setter Nicklin Hames has also improved in her second season. She ranks second in the Big Ten in assists with 11.54 per set. Hames wasn’t as sharp in some matches early in the season because she had been sick, Cook said. She’s also been sick this week and missed practice.

With eight of the 20 Big Ten Conference matches played, the Nebraska volleyball team leads the conference in both offense and defense:

No. 5 Nebraska at Indiana

This is the eighth week of the regular season for the Nebraska volleyball team, and the Huskers are making more of those plays that make coach…

Nebraska volleyball player Madi Kubik earned a pair of conference honors on Monday, as the outside hitter was named the Big Ten Conference pla…

In a match with a few comebacks, the Nebraska volleyball team never gave itself much of a chance to make one more in the final set during a fi…

'Nicklin is as tough of an athlete as I’ve ever been around': Hames leads Huskers into second half of Big Ten season

Nebraska setter Nicklin Hames was a game-time decision for the team's match against Indiana last week.

Freshman Madi Kubik, here on the attack against Stanford in September, has stepped up lately in Big Ten play.

Nebraska’s Nicklin Hames sets the ball against Purdue on Oct. 16 at the Devaney Sports Center.