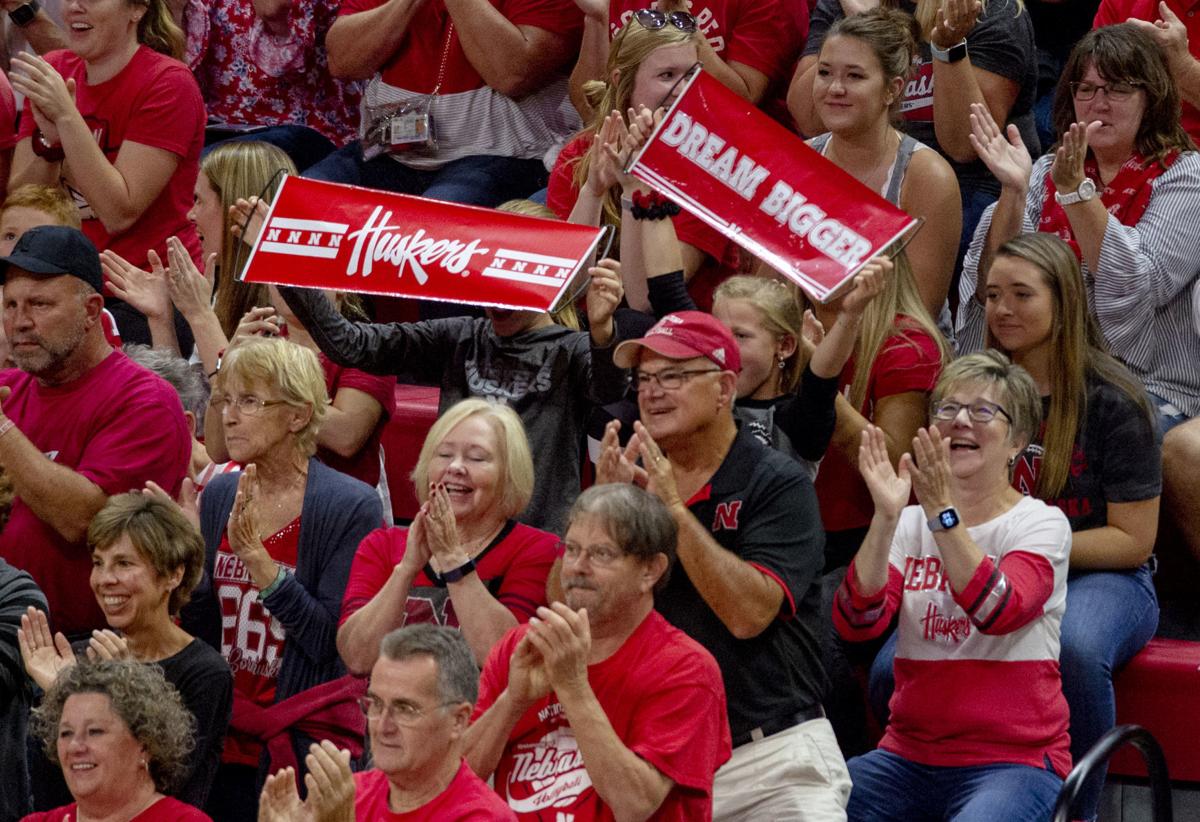 Husker fans celebrate Nebraska scoring a point against Wichita State on Sept. 21 at the Devaney Sports Center. The Huskers defeated the Shockers 3-0. 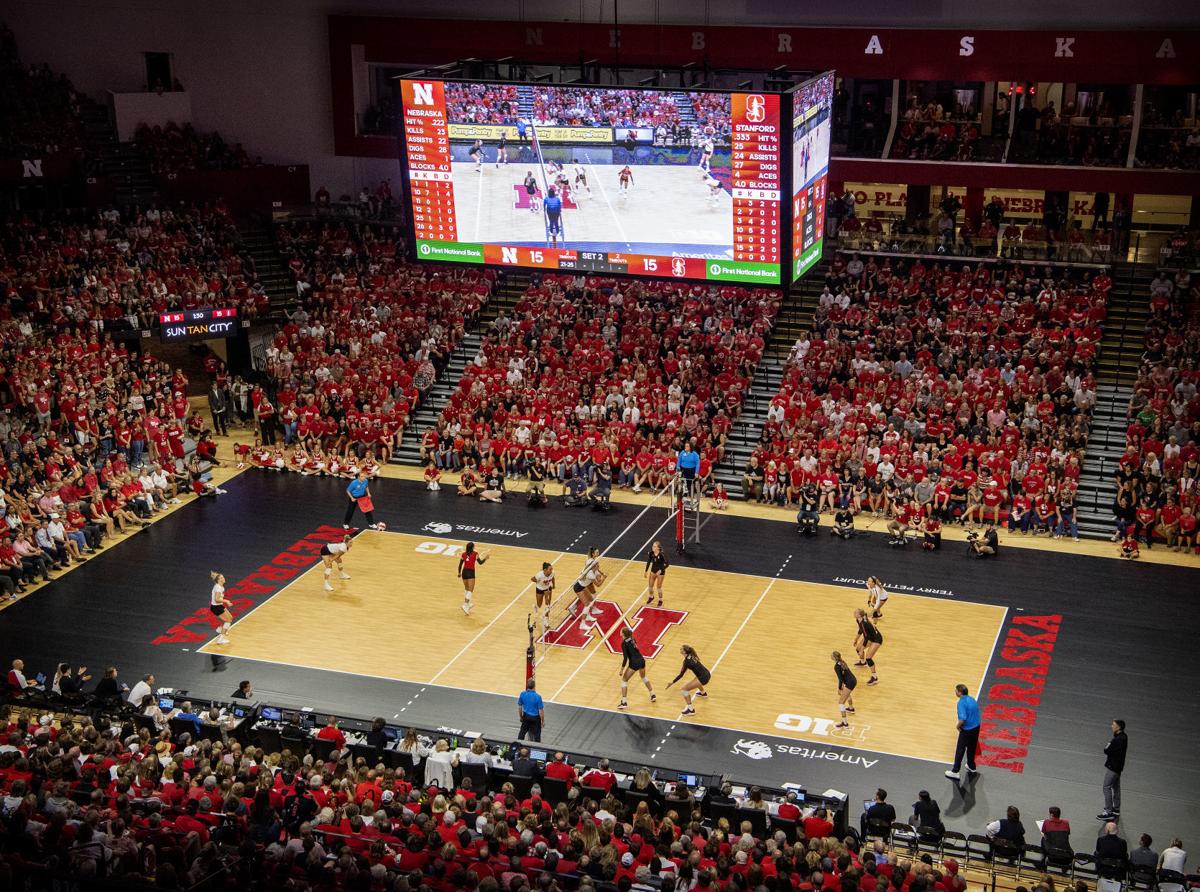 Nebraska played Stanford on the alternate volleyball floor at the Devaney Sports Center on Wednesday.

In his 20 years as Nebraska volleyball coach the motto for coach John Cook has been to dream big -- in winning national championships, beginning and maintaining a sellout streak and being a rare women’s program that generates a profit -- and it’s clear that Cook has fans dreaming big, too.

So now, on the suggestion of a fan, Cook is trying to see if it’s possible for the Nebraska volleyball team to play matches in Ireland, too

On Monday it was announced that the Nebraska football team will play a game in the European country to open the 2021 season. It will be the first game the Huskers play that season, on Aug. 28. The football game will be the second game in a new five-game series of college games in Dublin.

So Cook thinks it would be great if the volleyball team could play one or two regular-season matches during the same week in Ireland, and has asked Nebraska athletic director Bill Moos to look into it.

Maybe it’s a long shot, due to NCAA rules or finding other teams who are willing and able to go there also. But Cook is shooting his shot, and thinks he has an athletic director who will also.

“It would be historic,” said Cook to the Journal Star on Wednesday evening.

All college volleyball teams begin the season on the same weekend, and the dates would probably work. This year the season started on Aug. 30.

The idea started on Tuesday when a fan called into the Nebraska volleyball radio show on the Husker Sports Network. The fan said that Cook is always dreaming big, so he should take the volleyball team to Ireland to play a match.

Cook really liked the idea, and said he would contact Moos about it. So during a commercial break for the radio show he did.

“This is Nebraska,” Cook said. “And he loves thinking outside the box.”

College volleyball teams usually want to play at least two matches during the first weekend of the season. Nebraska would also have to play the Illini at least once during the conference season.

“So we could either play Illinois, or get two other teams to go. I suggested Notre Dame and Boston College,” Cook said.

Notre Dame and Boston College are each Catholic colleges. About 70% of residents of Ireland identify as being Catholic.

Volleyball isn’t really big in Ireland, Cook said. And Cook wouldn’t go if there wasn’t a good, safe arena to play in.

So what does Cook think the odds are that a Nebraska volleyball match in Ireland could really happen?

“First of all we have to see if it’s NCAA compliant,” Cook said. “Maybe we have to get a waiver, or something. I would say if Ireland is interested there is a really good chance it could happen. And they have a place for us to play.”

The contract for the football game in Dublin also stipulates that Nebraska will bring a minimum of 70 cheerleaders and band members on the trip.

This wouldn’t be the first time there has been a volleyball match scheduled in conjunction with a Nebraska football road game. In 2000 the volleyball team played at Notre Dame on the same day the Huskers played Notre Dame in football.

The Nebraska football team is also scheduled to play at Oklahoma during the 2021 season, and the Oklahoma volleyball program has asked if the Huskers want to play there the same weekend also.

Huskers to open 2021 season against Illinois in Ireland

The Huskers are opening the 2021 season against Illinois in Dublin, Ireland, according to a Monday morning news release.

Purdue shows its respect for Stivrins, so Kubik goes off for Nebraska volleyball team

Nebraska freshman outside hitter Madi Kubik had the best match of her college career in leading the Huskers to a four-set win against No. 20 P…

'No one really wants to let the ball drop': Defense still strength for Nebraska volleyball team

Aside from one bad match, when Wisconsin hit .376 and swept the Huskers, Nebraska is playing defense at a high level. Nebraska ranks No. 5 nationally in defense, with opponents having an average hitting percentage of .139 against the Huskers.

This is the eighth week of the regular season for the Nebraska volleyball team, and the Huskers are making more of those plays that make coach…

As the Nebraska football team returns from its first bye week and prepares to host Indiana on Saturday afternoon, it's an ideal time to sneak …

Nebraska volleyball player Madi Kubik earned a pair of conference honors on Monday, as the outside hitter was named the Big Ten Conference pla…

Husker fans celebrate Nebraska scoring a point against Wichita State on Sept. 21 at the Devaney Sports Center. The Huskers defeated the Shockers 3-0.

Nebraska played Stanford on the alternate volleyball floor at the Devaney Sports Center on Wednesday.