After a bad first set, the Nebraska volleyball team rallied for a four-set win against Michigan on Thursday in Ann Arbor, Michigan.

Kaylei Akana had five ace serves (the school record is seven), including three straight to start the third set. Hayley Densberger returned to the Huskers’ lineup of servers and had two aces. Lexi Sun, Madi Kubik and Nicklin Hames had one ace apiece.

Lauren Stivrins had served last week, but Densberger moved back into that spot on Thursday.

“Hayley was really thumping it in practice, we noticed,” said Nebraska coach John Cook on the Husker Sports Network. “Her balls were really moving. These balls are a little bit different, so we were trying to figure out who had the best-looking serve, and Hayley’s was really moving and you saw the result. She ran a ton of points.”

Sun led the Huskers with 13 kills. Kubik had just one kill in the first set but got going in the final three sets and finished with 10.

Nebraska (13-2) has a 10-match win streak against Michigan, and has a 15-2 record against the Wolverines since joining the Big Ten.

The Michigan blockers didn’t defend Hames and the Husker setter made them pay with five kills on setter tips.

Nebraska had a .232 hitting percentage, and held Michigan to .154 hitting.

Michigan got out to a 6-1 lead to start the match, including two ace serves, and never trailed in the first set. Nebraska hit just .111 in the set.

After playing poorly in the first set, Nebraska had a major turnaround.

“I just told them, 'OK, new match, we’re starting over and we got to win three (sets),'" Cook said. "They knew they were stinking the place up, so it didn’t do any good to harp on them. I reminded them of what we needed to do, and I said we’re just starting over."

Nebraska also improved its serve-receive over the final three sets, which allowed Hames to get better swings for the hitters, especially the Husker middles.

“We started off and we’re passing the ball all over in three zip codes in Ann Arbor and Nicklin can never get in a rhythm,” Cook said. “And finally we started passing balls in somewhat of a rhythm. You saw in set four (Hames) gave Kayla a great set, Lauren a couple of great sets. We got to do a better job of getting her the ball. Once we got her the ball, she did well, but she was running a lot tonight.”

After having just two blocks in the first set, Nebraska had nine in the final three sets combined.

Nebraska dominated the second set thanks to two long serving runs. Akana served a 5-0 run to start the second set that included two kills on setter dumps from Hames. Later, Hames served an 8-0 run for a 15-4 lead. Nebraska had four blocks and four ace serves in the set.

It was another good start to the third set, with Akana serving three consecutive aces to begin it. Later, Densberger served a 3-0 run, and Akana had another ace to put the Huskers up 19-11. Nebraska won the set 25-15 to take a 2-1 match lead.

The same teams will play again on Friday at 6 p.m.

The weekend series between No. 1 Wisconsin and No. 11 Penn State has been canceled due to health and safety concerns related to COVID-19 on the Penn State squad. Penn State is scheduled to finish the regular season next week against Nebraska. 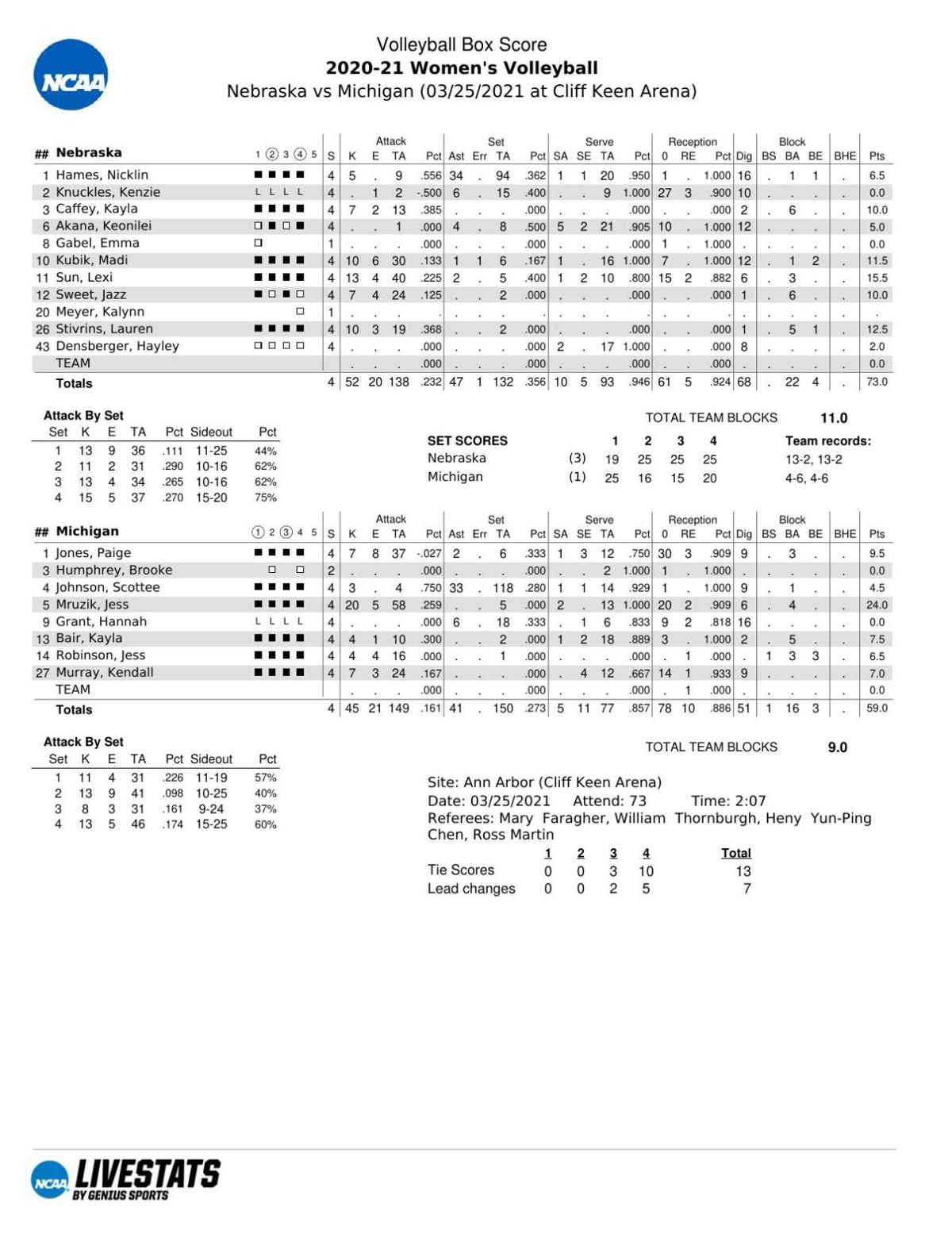 When right-side hitter Riley Zuhn suffered a season-ending injury last week with a broken bone in her foot, the Huskers entered the caution zone.

Behind Caffey and Stivrins, the Huskers 'had the pedal to the metal' in complete win, but next match may be in jeopardy

Kayla Caffey had a season-best 10 kills, and the Huskers "had the pedal to the medal the whole night with everything we were doing" in sweep.