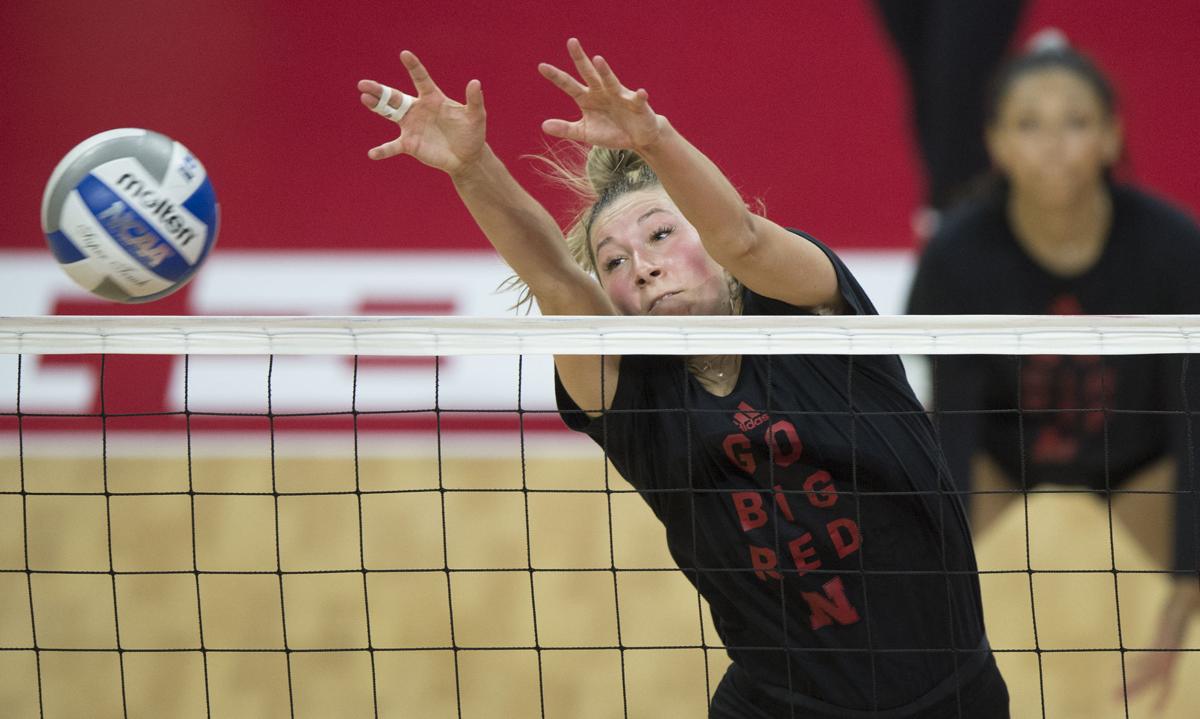 Nebraska's Madi Kubik blocks a shot on during the volleyball team's second practice of the season Aug. 10 at the Devaney Sports Center. 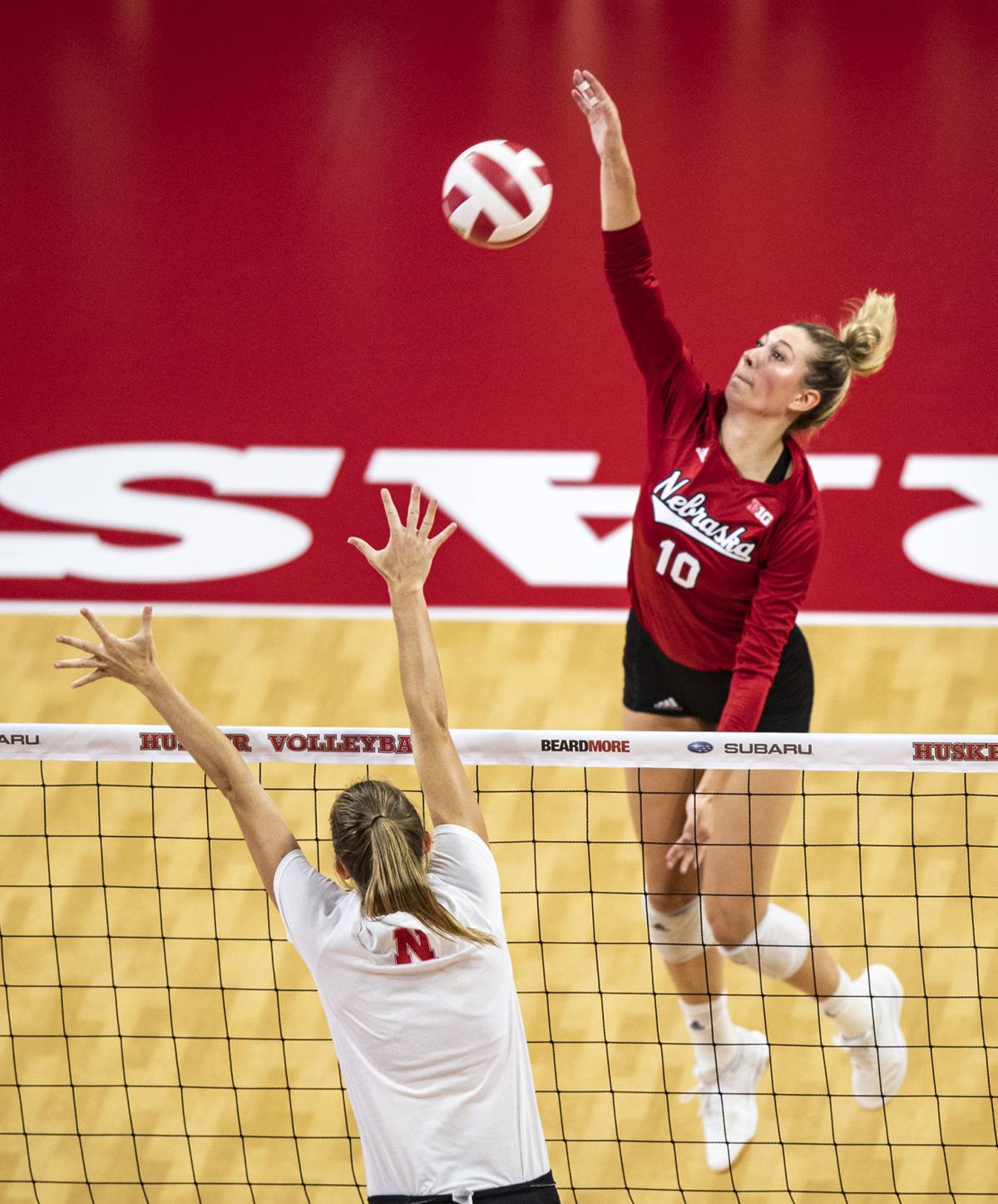 Freshman outside hitter Madi Kubik makes a kill during the Red-White Scrimmage at the Devaney Sports Center in August. 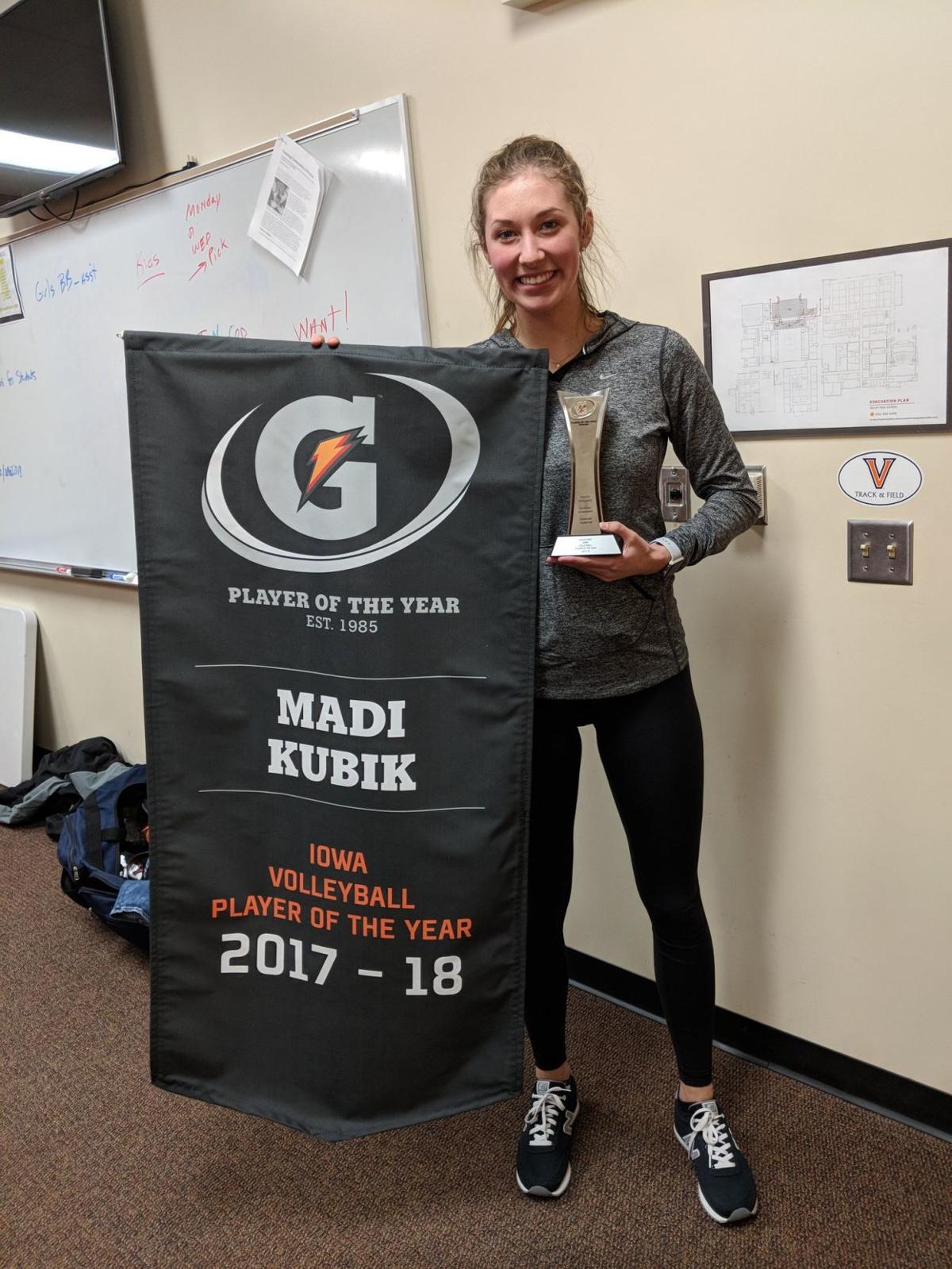 Madi Kubik was the Gatorade Player of the Year for high school volleyball in Iowa in 2017 and 2018. She came to Nebraska as the No. 4-ranked recruit in the nation in the 2019 class, according to Prepvolleyball.com.

When the Nebraska volleyball team plays its first match of the season against Creighton on Friday, outside hitter Madi Kubik may be the next player to come on the scene and play a major role as a freshman for the Huskers.

Before Kubik arrived in Lincoln, she played at Valley High School in West Des Moines, Iowa.

Kubik won the Gatorade Player of the Year award for the state as both a junior and senior. And Kubik also changed the way some teams looked at playing the sport after seeing how devastating Kubik could be with her attacks from the back row of the court.

“Her back-row attack was phenomenal, and other teams now are starting to implement more back-row attacking at our level,” said Jeremy Mikesell, the head coach at Valley. “That’s rare to see strong back-row attackers, but she was kind of trailblazing that.”

Kubik moved to Iowa from Springfield, Missouri, just before her freshmen year and helped change the expectations for the program.

“We had heard about her, and one of my assistant coaches did some research and found out that she was on one of the really young USA teams over in Springfield, so she had already been getting some accolades,” Mikesell said. “We’re thinking, ‘Oh, this kid must be good.’

“Well, she walks into our gym and we had a really good team that next year so we were wondering how she would fit in, and she just fit in awesomely. It was her bubbly personality, how she connected with all of the players, she was the tallest one on the court."

When Kubik was 9 years old she played on a team of 12-year-olds, and she continued to play up a few age groups.

When she was a freshman, Kubik was a good hitter, but what opposing coaches kept talking about was her defense.

“As big as she was, she was so good defensively, and I think that is still one of her strengths that I think (Nebraska coach) John Cook and his staff are noticing is that she is just one of the quickest reads on the court to pick up balls and sacrifice herself to make plays,” Mikesell said. “I know she loves pounding balls, but I think one of her passions is keeping the ball off the floor.”

Kubik played for the largest school in the state. She holds the Class 5A state tournament record for kills in a match with 31. She got that total in a five-set match in the first round of the state tournament as a junior. Then she tied her record in the semifinals the same year, but did so in just a three-set match.

"It was incredible," Mikesell said. "From five sets to then three sets and still knock out 31 kills was pretty amazing.”

As a junior, Kubik helped Valley to a state runner-up finish when she averaged 5.5 kills per set.

As a senior, Valley reached the state semifinals. That year Kubik also got to play with one of her three volleyball playing younger sisters, Hayden. She’s an uncommitted sophomore who attended Nebraska’s Dream Team camp this summer.

Kubik was ranked as the No. 4-player in the nation in her recruiting class.

Recruit says she's been given special opportunity with Huskers

Madi Kubik says she knows the special opportunity she’ll have when she gets to join the Nebraska volleyball program in a few years.

The Lincoln East volleyball team finished fourth in the consolation bracket after losing 25-14, 25-17 to North Platte on Saturday at the Belle…

Coach Wade Houchin and his Raymond Central football team thought the Mustangs would be much better in 2019.

John Cook on the radio: Different attacks lead to good start to season for Lexi Sun

Through the first four matches of the season, the play of junior outside hitter Lexi Sun has been very positive, and much-needed, as the Huskers learn to play with some inexperienced players at the other outside hitter position.

Nebraska's Madi Kubik blocks a shot on during the volleyball team's second practice of the season Aug. 10 at the Devaney Sports Center.

Freshman outside hitter Madi Kubik makes a kill during the Red-White Scrimmage at the Devaney Sports Center in August.

Madi Kubik was the Gatorade Player of the Year for high school volleyball in Iowa in 2017 and 2018. She came to Nebraska as the No. 4-ranked recruit in the nation in the 2019 class, according to Prepvolleyball.com.