It may be the second-best now.

Wallace pitched a gem in the quarterfinal round of the Big Ten Tournament on Thursday, limiting Penn State to three hits and retiring the final 10 batters she faced in Nebraska's 3-1 victory in East Lansing, Michigan.

Nebraska (38-14) will play Ohio State (35-14) at 1 p.m. on BTN in Friday's semifinal round. Thursday marked the Huskers' first Big Ten tourney win since 2016 and Friday will be their first semifinals appearance since 2015.

On Saturday, Wallace limited Indiana to four hits and struck out five in a 7-2 victory. She dialed it up Thursday.

After giving up a run on an RBI groundout in the second inning, Wallace retired 17 of the final 19 batters. She struck out five, improved to 16-6 and lowered her season earned-run average to 3.14.

"I would say it was the same," Wallace said of carrying over Saturday's performance into this week. "Just sticking to our game plan that we had planned out for them, hit my spots and try to get a win.

Nebraska's offense came through for Wallace in the fifth inning. Sophomore Kaylin Kinney was hit by a pitch, freshman Ava Bredwell singled to turn the lineup over, and sophomore Billie Andrews followed by popping a two-run double into right-center field.

Sophomore Sydney Gray added a two-out RBI hit later in the inning to give Nebraska a 3-1 lead.

"I think once we put those three runs up, I was like, 'OK, we got this and keep throwing your game and your defense has got your back,'" said Wallace, who was an All-Big Ten honorable mention selection.

Four of Nebraska's eight hits were doubles against the Nittany Lions (32-22).

It has been six years since Nebraska won a game at the Big Ten Tournament. It lost in the first round in 2017, 2018 and 2019. There wasn't a tournament the past two years because of COVID-19.

It's another step the Huskers have talked about, Wallace said.

"I think it's everything we've been working towards," she said. "We've talked about this all year long and we're not done, but we're just getting started. We're working toward our goal that we've had set out since February and January."

NU, seeded second in the tournament, will see the Buckeyes for the second time in about two weeks. Ohio State took two of three from the Huskers in Columbus, Ohio.

One of three sophomores on the District 7 list, Andrews leads the team in runs, home runs and RBIs. Andrews has posted 14 multi-RBI games and 15 multi-hit games.

The Gretna native is majoring in graphic design and holds a 3.90 grade-point average. Andrews is a three-time member of the Nebraska Scholar-Athlete Honor Roll and has earned the Nebraska Gold Academic Medallion. 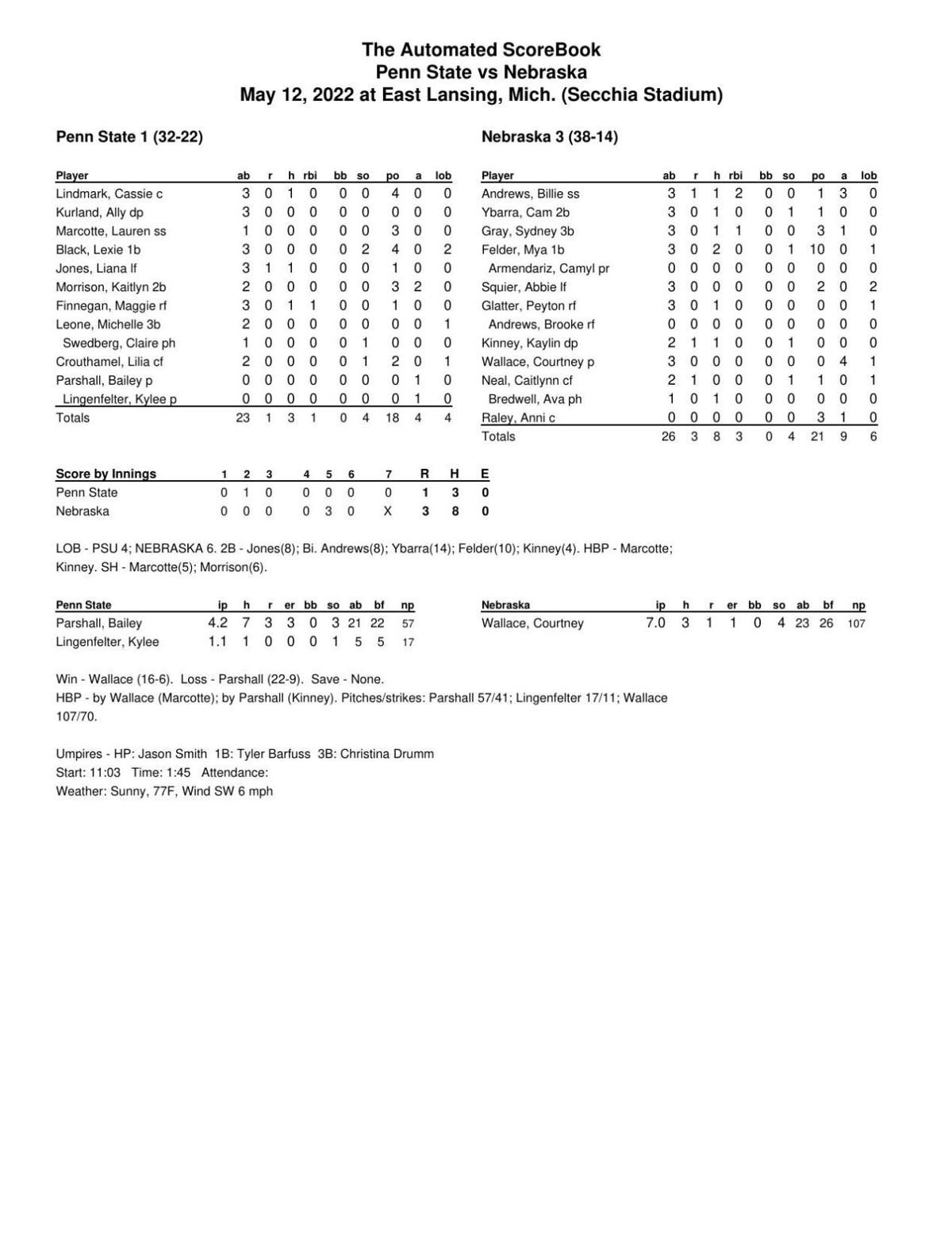 Huskers earn No. 2 seed for Big Ten softball tournament; here's a look at the schedule

The Nebraska softball team took two of three games from Indiana to close the regular season.

Sunday marked the end of Nebraska's best regular season since 2014, and it could not have ended in more dramatic fashion.

Living up to her part of the promise, Ferrell delivers game-winning hit; Huskers are in the Big Ten tourney final

Liv Ferrell worked her way out of a two-runner jam in the top of the seventh inning. In the bottom half, the senior delivered with the bat.

'It's just all about fight': Nebraska leans into familiar formula to beat Michigan for emotional Big Ten tourney title

Behind two clutch swings from senior Cam Ybarra, the Nebraska softball team is headed back to Lincoln with its first-ever Big Ten title.

For the first time since 2016, the Nebraska softball team is gearing up to play in the NCAA tournament and looking to continue a special run.

When Nebraska has needed a timely hit or the "hype man" for a lead in cheer, senior captain Cam Ybarra has stepped up time and time again.

Bonded by dogs and a 'competitive spirit,' Ferrell and Wallace lean on each other to push NU back to postseason ways

For all the attention NU's offense has received this season (and rightfully so), softball tends to come back to pitching. Enter Olivia Ferrell and Courtney Wallace.