Northwestern's bats came alive in the second inning and the Nebraska offense struggled for the fourth time in five games in a series-opening 6-1 softball defeat Friday in Evanston, Illinois.

Tristen Edwards' solo home run in the sixth was the Huskers' only extra-base hit, and their only dent on an otherwise stellar day for the Wildcats and Williams.

NU's Courtney Wallace sat a potent Wildcat lineup in order in the first inning, but Morgan Newport's solo blast in the bottom of the second ignited a five-run inning for the Wildcats.

Angela Zedak hit a two-run homer in the frame, and Skyler Shellmyer and Rachel Lewis, the top two hitters in the lineup, added two-out RBI singles.

That was more than enough for Williams. She walked only one batter and of her 118 pitches, 80 were strikes.

Outside of the second inning, Wallace (10-8) was solid. She settled in to pitch the remainder of the game and struck out four. Wallace extended her scoreless innings streak to 21 before running into trouble in the second.

Sophomore Brooke Andrews had two hits for the Huskers, who had only two runners reach second base throughout the game.

The Huskers (21-20) are 1-4 in their previous five games since sweeping Maryland. They have scored a combined three runs in the four defeats, though they were without two of their top hitters against Iowa.

Nebraska and Northwestern (27-14) will play a doubleheader beginning at 1 p.m. Saturday. The second game, to start at approximately 4 p.m., will be televised on BTN. 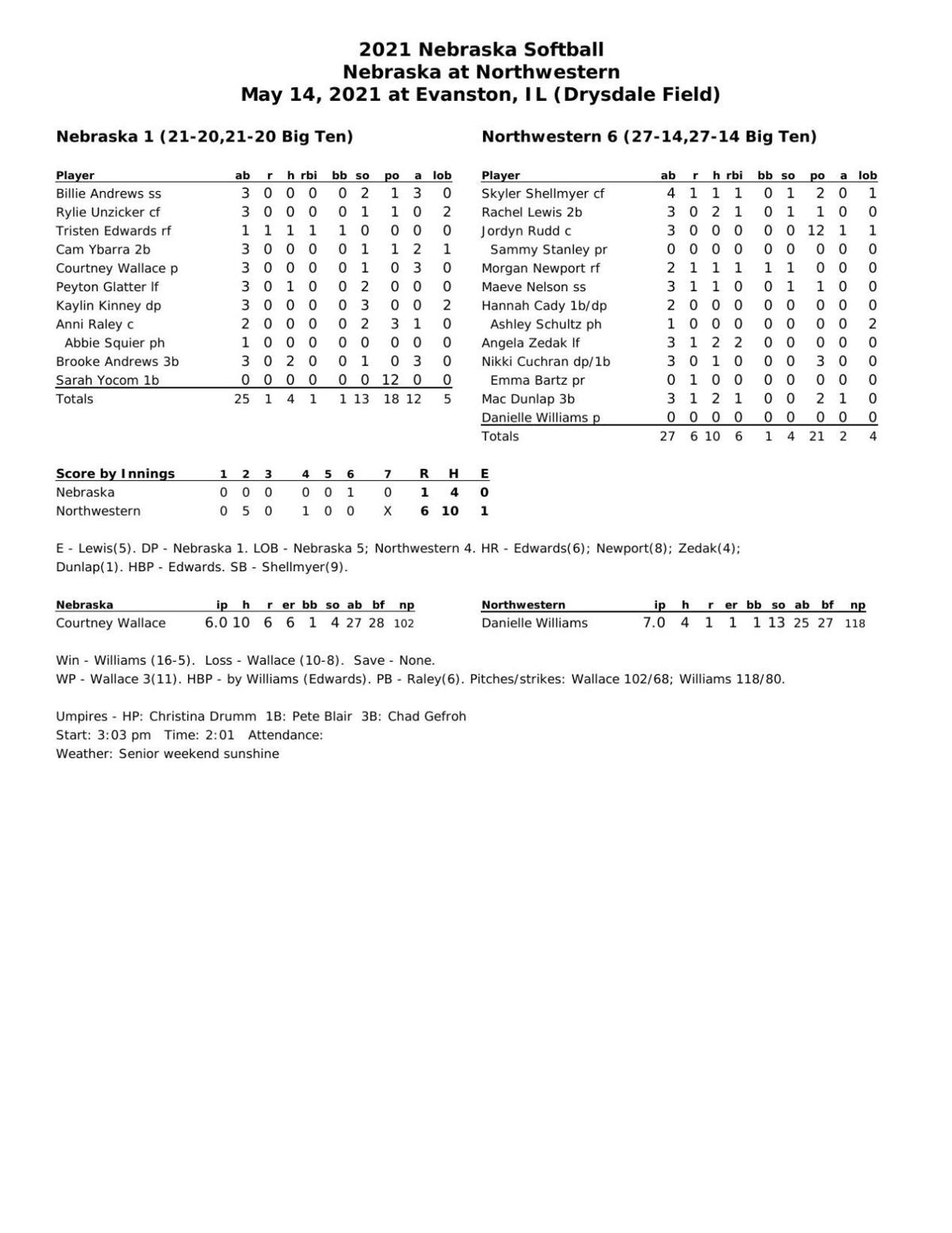 A look back at Nebraska softball's past five seasons

How it ended: Illinois defeated the Huskers in the first round of the Big Ten Tournament.

How it ended: Michigan State defeated the Huskers in the first round of the Big Ten Tournament.

How it ended: Penn State defeated the Huskers in the first round of the Big Ten Tournament.

How it ended: Missouri defeated the Huskers 9-0 in the championship game of the NCAA Columbia (Mo.) Regional.

NU's Olivia Ferrell pitched a complete game, allowing six hits and the lone run, as the Huskers saw their four-game winning streak come to an end.

For the third time in three games, NU (22-21) was down early again, this time trailing 3-0 after three innings. Enter Glatter and Andrews.

Northwest broke a tie ball game in the fourth inning, doubled its lead an inning later and then held off a late Husker rally in a 6-5 softball…

Tristen Edwards was among the nation's leaders in on-base percentage at .583, and Courtney Wallace took a big leap in the circle this year.