Northwest broke a tie ball game in the fourth inning, doubled its lead an inning later and then held off a late Husker rally in a 6-5 softball victory Sunday in Evanston, Illinois.

The Wildcats took three of four games from Nebraska, which ends its season at 22-22. The Huskers lost six of their final eight games.

The Huskers, who rallied for a 5-4 win in Game 3, trailed 3-1 Sunday before freshman leadoff hitter Billie Andrews hit a two-out, two-run single that ricocheted off the third-base bag to knot the game at 3-3.

Northwestern (29-15) regained the lead in the bottom of the fourth, then extended the lead to 6-3 on an RBI double and an RBI groundout in the fifth.

But the Huskers didn't go away. Senior Rylie Unzicker lined a home-run ball over the left-field fence in the sixth inning, and Tristen Edwards, in her final at-bat as a Husker, trimmed the deficit to one run with a no-doubt shot in the seventh.

But Northwestern pitcher Morgan Newport, who tossed a complete game, retired the next two batters to end the game and NU's season. Newport also had three hits, including a two-run homer.

The Huskers had 11 hits against Newport, but were 3-for-11 with runners in scoring position. NU scored a run in the top of the first, but left the bases loaded, and had two on with no outs in the second inning before coming up empty.

Courtney Wallace (11-9), who came in relief of Olivia Ferrell, took the loss. The junior allowed three runs in three innings.

Billie Andrews finished 3-for-4 with two RBIs, and Edwards, Unzicker and Cam Ybarra each had two hits. 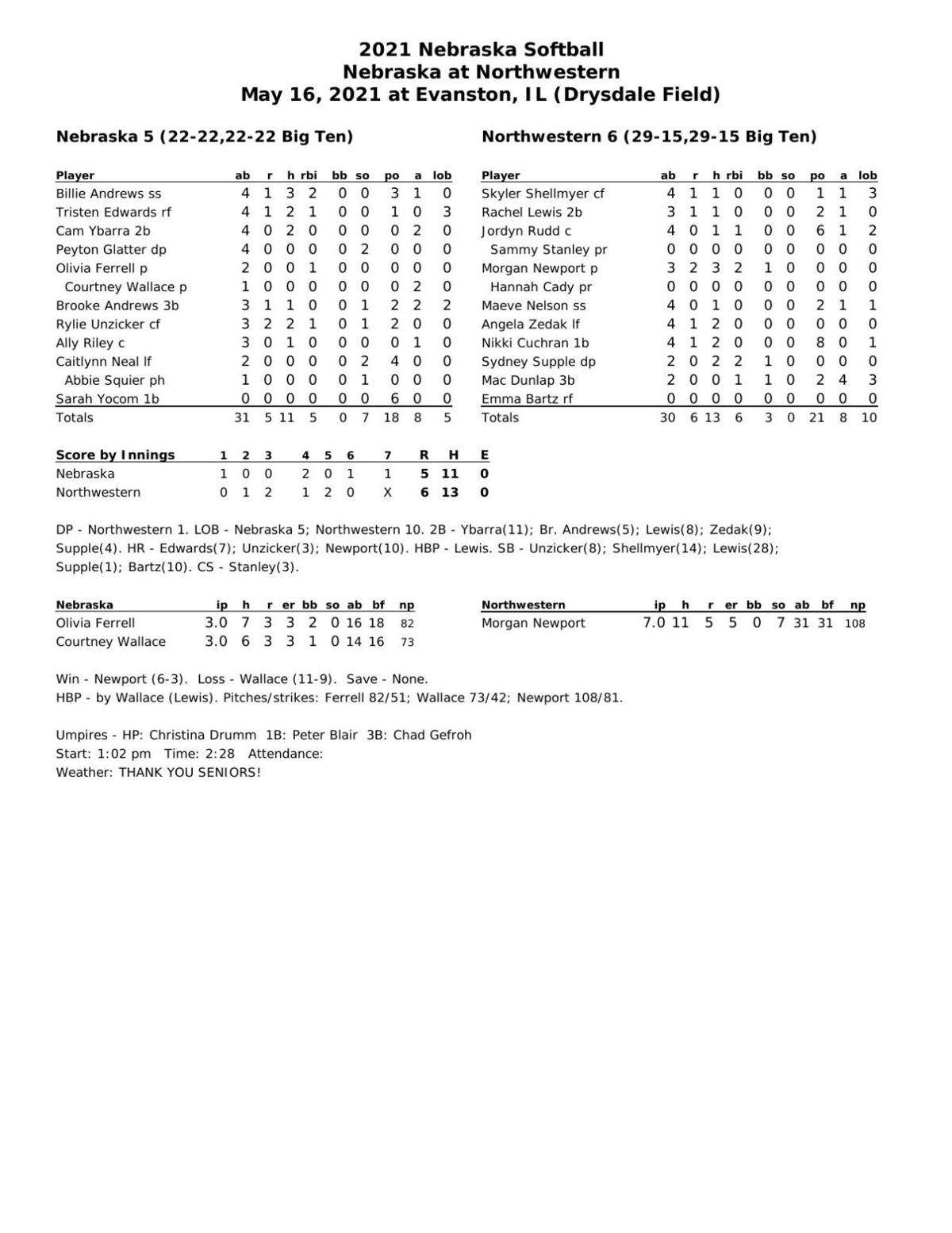 Three losses in Iowa City last weekend dropped the Huskers (21-19) from fifth to eighth in the Big Ten standings.

Tristen Edwards was among the nation's leaders in on-base percentage at .583, and Courtney Wallace took a big leap in the circle this year.

Kniesche hasn't missed a beat in her freshman season: "I've always had high expectations of myself, but I'm surprised how well I'm doing."

In Mya Felder, the Huskers are getting a player who has a .326 career average as a college hitter.