Nebraska's Olivia Ferrell was outdueled by Iowa ace Allison Doocy in the Hawkeyes' 1-0 victory Friday in Iowa City, Iowa, in the opener of a four-game series.

Ferrell pitched a complete game, allowing six hits and the lone run, as the Huskers (20-17) saw their four-game winning streak come to an end.

Freshman Caitlynn Neal had Nebraska's only hit against Doocy, who threw a no-hitter against Rutgers in her last start to earn Big Ten Pitcher of the Week honors. The Hawkeyes (21-16) got back-to-back triples from Aralee Bogar and Brylee Klosterman with one out in the third inning to score the only run they needed.

From left side of the infield to 'SportsCenter' Top 10 plays, Andrews sisters happy to share the spotlight

Ferrell, who shined with a complete-game effort in a win against Maryland last Friday, finished with three strikeouts.

The Huskers threatened in the sixth when Neal's hit snapped Doocy's 10-inning hitless streak. A Billie Andrews walk moved Neal to second, but Cam Ybarra hit into a double play to end the threat.

In the seventh, Nebraska's Kaylin Kinney drew a leadoff walk. A sacrifice bunt moved pinch runner Camyl Armendariz to second, but the Huskers couldn't bring her in to tie the game.

The two teams resume their series with a doubleheader on Saturday, which begins at 11:30 a.m. 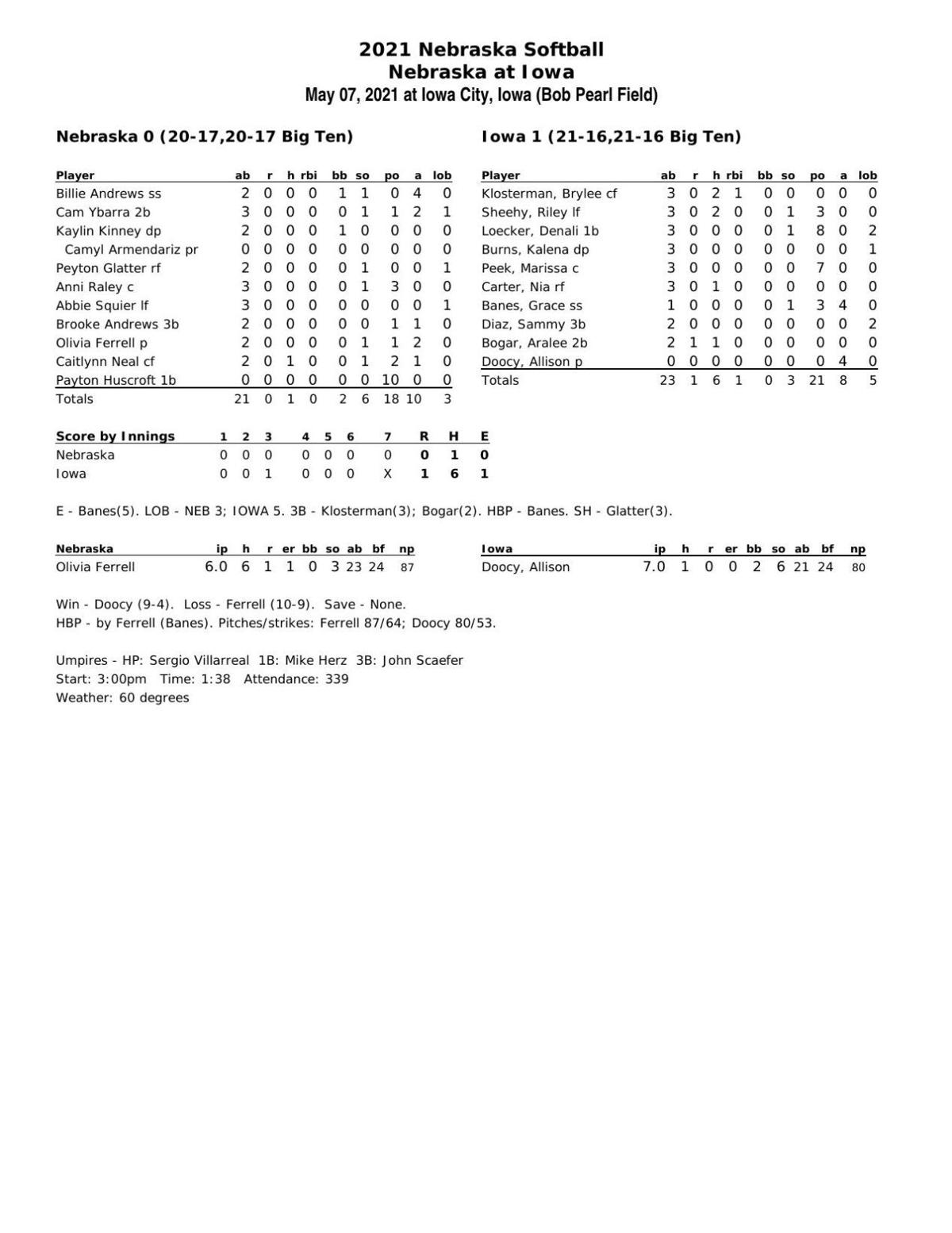 A look back at Nebraska softball's past five seasons

How it ended: Illinois defeated the Huskers in the first round of the Big Ten Tournament.

How it ended: Michigan State defeated the Huskers in the first round of the Big Ten Tournament.

How it ended: Penn State defeated the Huskers in the first round of the Big Ten Tournament.

How it ended: Missouri defeated the Huskers 9-0 in the championship game of the NCAA Columbia (Mo.) Regional.

"I felt like we did a really nice job in pregame just staying really focused on the game at hand and then celebrating after."

Olivia Ferrell threw a seven-inning complete game in Game 1 then closed the door on Maryland in the nightcap, too. "Wow" is right.

Martinez, the Huskers' three-year starter, has a 3.50 GPA in management and will graduate on Saturday.

Three losses in Iowa City last weekend dropped the Huskers (21-19) from fifth to eighth in the Big Ten standings.

For the third time in three games, NU (22-21) was down early again, this time trailing 3-0 after three innings. Enter Glatter and Andrews.