Tristen Edwards got a rare pitch over the middle of the plate, and she didn't miss.

The Nebraska senior's two-run homer in the top of the sixth inning broke a tie game and lifted the Husker softball team to a 6-4 win against No. 24 Minnesota on Sunday at Jane Sage Cowles Stadium in Minneapolis.

With the victory, Nebraska (15-13) avoided a four-game sweep and snapped a 14-game losing streak to the Gophers that dated to the 2015 season. The Huskers also halted Minnesota's eight-game winning streak.

Minnesota overpowers Huskers with arms, including a no-hitter, in softball doubleheader sweep

No. 24 Gophers wipe out Huskers' big inning with walk-off victory

It was a much different outcome for the Husker offense after finishing 2-for-39 at the plate during Saturday's doubleheader. NU finished with 11 hits against Autumn Pease, who threw a no-hitter a day earlier, and Amber Fiser (10-5).

Anni Raley had a career day for the Huskers. The junior catcher went 3-for-4 and her two-run homer to left in the fourth inning gave the Huskers a 3-1 lead. NU extended the lead to 4-1 on Edwards' RBI single.

But Minnesota (22-6) bounced back and tied the game at 4-4 on a bases-loaded walk to Sydney Strelow in the fifth. Wallace got out of the jam by striking out the next batter.

Brooke Andrews opened the sixth with a single before Edwards lifted a ball over the fence in left center for her fifth homer of 2021.

Minnesota had the tying run at the plate in the seventh, but Ferrell struck out Sara Kinch and then induced a ground out to clinch the win.

Edwards finished 2-for-3 with an intentional walk and three RBIs, and senior Rylie Unzicker added a pair of hits, including a double. 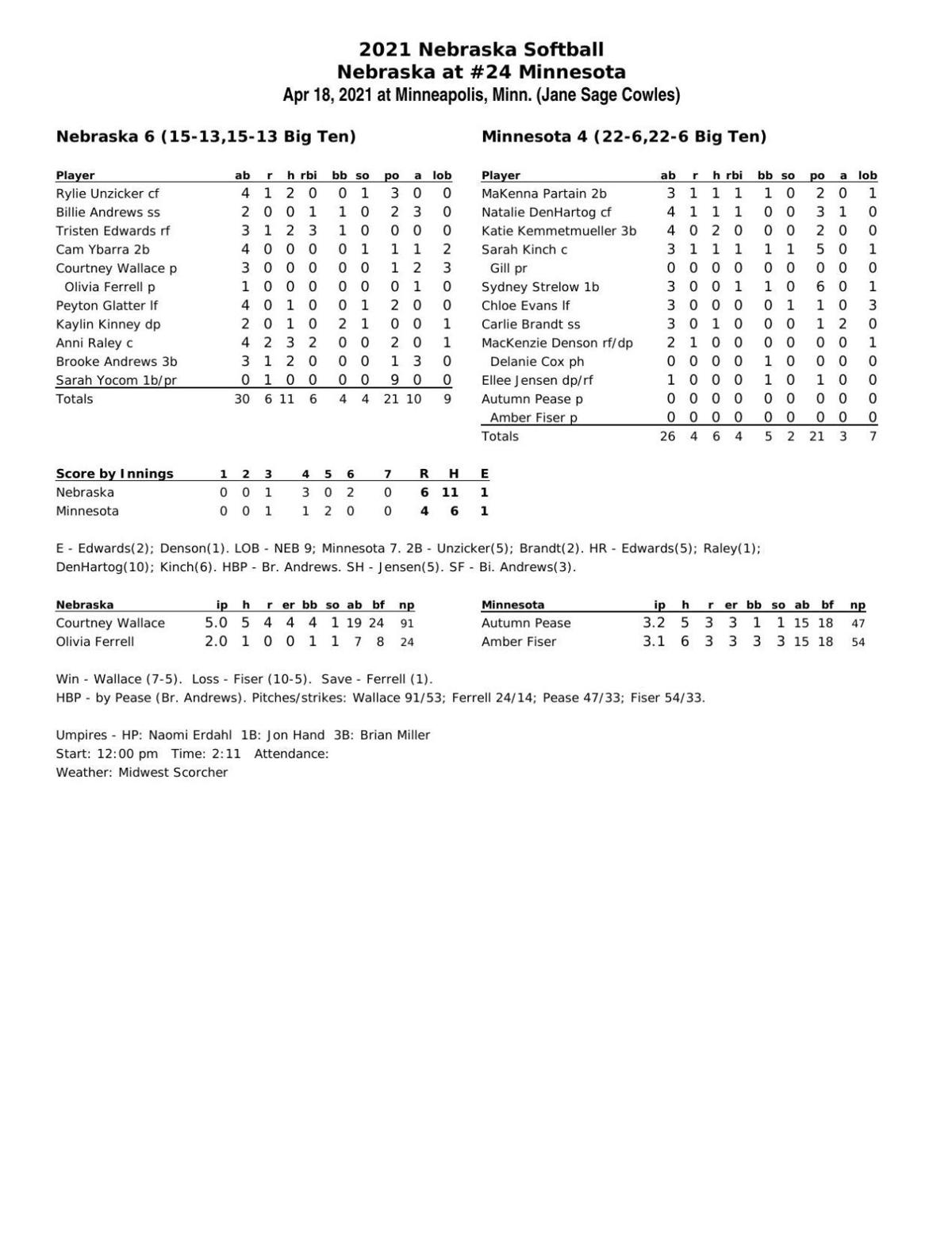 Past the halfway point, what have we learned about Husker softball? And what could we learn?

The Huskers are more than halfway through their season. Here are three things we have learned so far and three questions for the rest of the way.

'We wanted to take the series:' Ybarra's three-run blast turns the tables on Illinois as NU rallies for win

"That felt, honestly, amazing," Ybarra said of her second homer of the season. "I haven't really had an at-bat like that in a while."

Huskers, other Big Ten teams try to play into NCAA Tournament picture without knowing what it looks like

What's it going to take to get into the Big Dance this season? "That feels like the $64,000 question, right?" We take a shot at an outline.

Badgers take advantage of extra outs, including a 'game-changer,' to take series opener against NU

Rhonda Revelle on loss: "You change of one of those defensive plays and you get one more clutch hit, it's probably 6-4 us."

Kaylin Kinney kept Wisconsin off-balance for 5 2/3 innings in leading the Huskers to a 9-4 win in a Game 1 win at Bowlin Stadium.

The Badgers scored five runs on six hits in the fifth and left Lincoln taking three of four games.

Nursing school in the on-deck circle, NU's Riley and Unzicker make difficult decision to put softball behind them

The Husker duo are set to pursue careers in nursing at the end of the season. Here's an inside look at a decision college athletes must make.

Olivia Ferrell threw a seven-inning complete game in Game 1 then closed the door on Maryland in the nightcap, too. "Wow" is right.