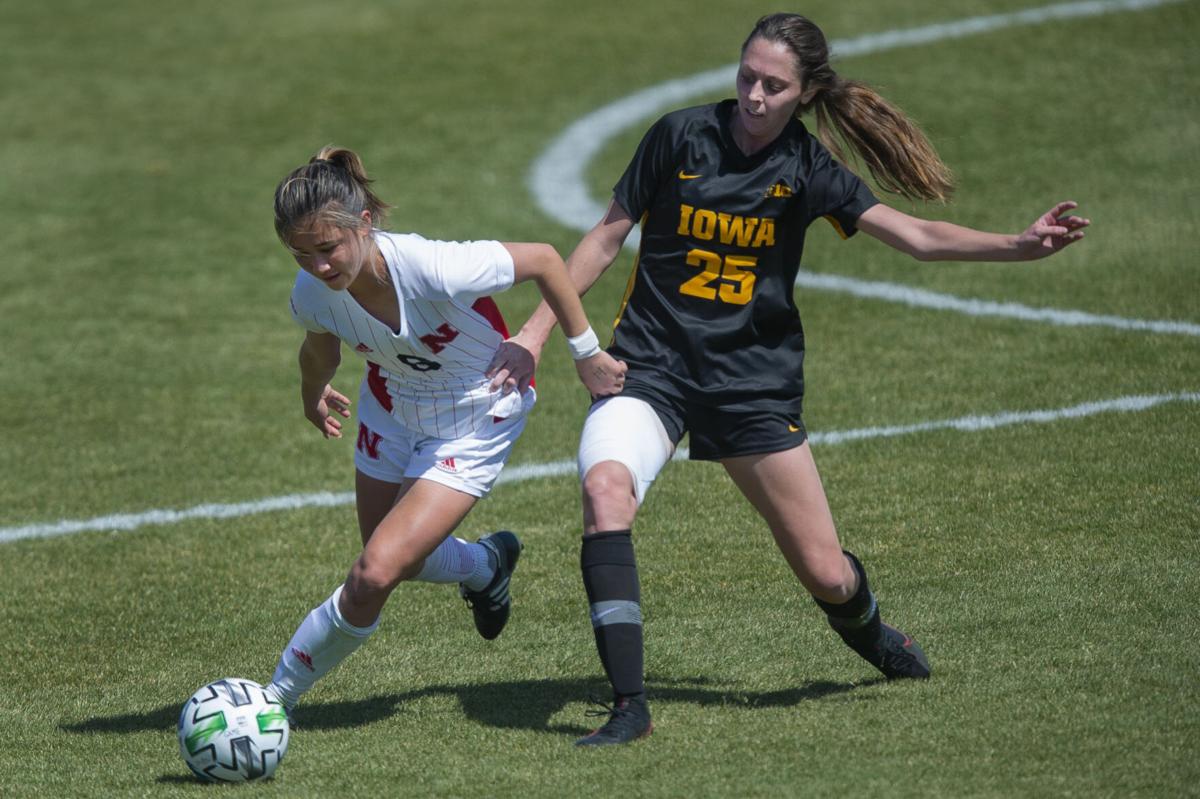 Nebraska's Dakota Chan (left) is defended by Iowa's Josie Durr in the first half April 3 at Hibner Stadium. 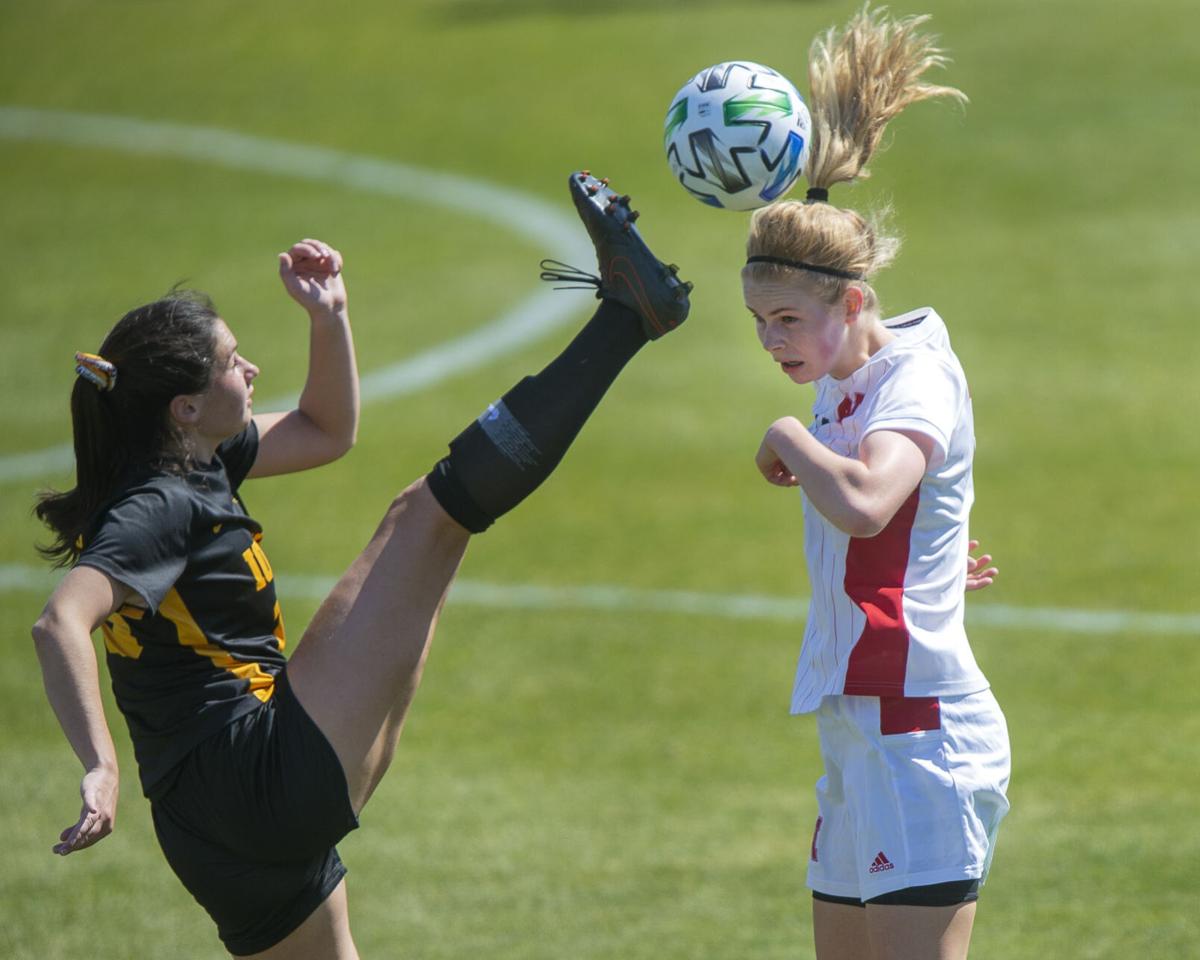 Iowa's Monica Wilhelm is called for a high kick that comes close to Nebraska's Kathleen Aitchison in the second half Saturday at Hibner Stadium.

Clear skies, bright sunshine and a light breeze marked just about the best weather the Nebraska soccer team has had all season.

The delayed 2020 fall season hasn’t been an easy one for the Huskers, but they turned in one of their best performances all year on a beautiful spring Saturday.

Freshman Gwen Lane’s goal in the 23rd minute and an unbreakable defensive performance in the second half led the Huskers to a 1-0 win over Iowa at Hibner Stadium.

Goals had been few and far between for Nebraska (2-5-3) over its past few matches after freshman Eleanor Dale, the team’s leading scorer, suffered a season-ending injury on March 13. The Huskers found the net just once in their last four games, but a different pair of freshman forwards led the attack this time around.

Freshman Reagan Raabe troubled the Iowa (2-8-1) defense in the first half as she repeatedly burst past defenders at midfield to set up scoring opportunities. One minute after drawing a yellow card challenge while through on goal, Raabe produced another scoring chance that eventually fell to Lane.

None of Lane’s 10 previous shots this season had found the back of the net, but the Lincoln Southwest grad didn’t miss from 6 yards out as she scored her first-ever Husker goal.

“It felt great, and it was another breakthrough moment for me,” Lane said. “As a freshman, it was good to get that first goal, and I now have a lot of momentum that I want to keep going through the Big Ten Tournament.”

Nebraska’s freshman goalkeeper Makinzie Short didn’t have to make a save on any of Iowa’s seven first-half shots, but she soon became one of the busiest players on the field in the second half.

The Huskers managed just one second-half shot as they tried to close out the game, while Iowa had 15 shots in the second half. Short made four important saves, but the biggest came when junior midfielder Dakota Chan’s header stopped a near-certain Iowa goal from a corner kick.

Brown has played every minute of the season, and the vast majority of that has come with junior Olivia Brown by her side at center back. The duo made several key blocks that ensured only five of Iowa’s 22 shots were on target.

“I feel like we know what each other is going to do and we always know when to cover for each other,” Brown said. “I have a lot of trust in her, always.”

The Huskers are set to face Minnesota in a Big Ten soccer tournament opener Thursday in Champaign, Illinois. NU is the sixth seed in the west regional while the Gophers are No. 3. The game's start time has not yet been announced.

Taking down a rival in Iowa to break the Huskers' six-game winless streak made it a perfect end to the regular season for Brown. And the weather didn’t hurt, either.

“I couldn’t have asked for a better game and better weather for the final Big Ten game of the year,” Brown said.

The Huskers have been outscored 13-3 over their past six matches, including four matches without scoring.

The accolades stem from a 1-0 win Saturday, in which Makinzie Short had a shutout in goal and Gwen Lane scored her first collegiate goal.

The Nebraska soccer team will take on a win-or-go-home mindset from here on out, starting with Thursday's regional weekend match against Minneapolis.

The decision was mutually agreed upon by both teams due to health and safety concerns in the Nebraska program.

Nebraska's Dakota Chan (left) is defended by Iowa's Josie Durr in the first half April 3 at Hibner Stadium.

Iowa's Monica Wilhelm is called for a high kick that comes close to Nebraska's Kathleen Aitchison in the second half Saturday at Hibner Stadium.