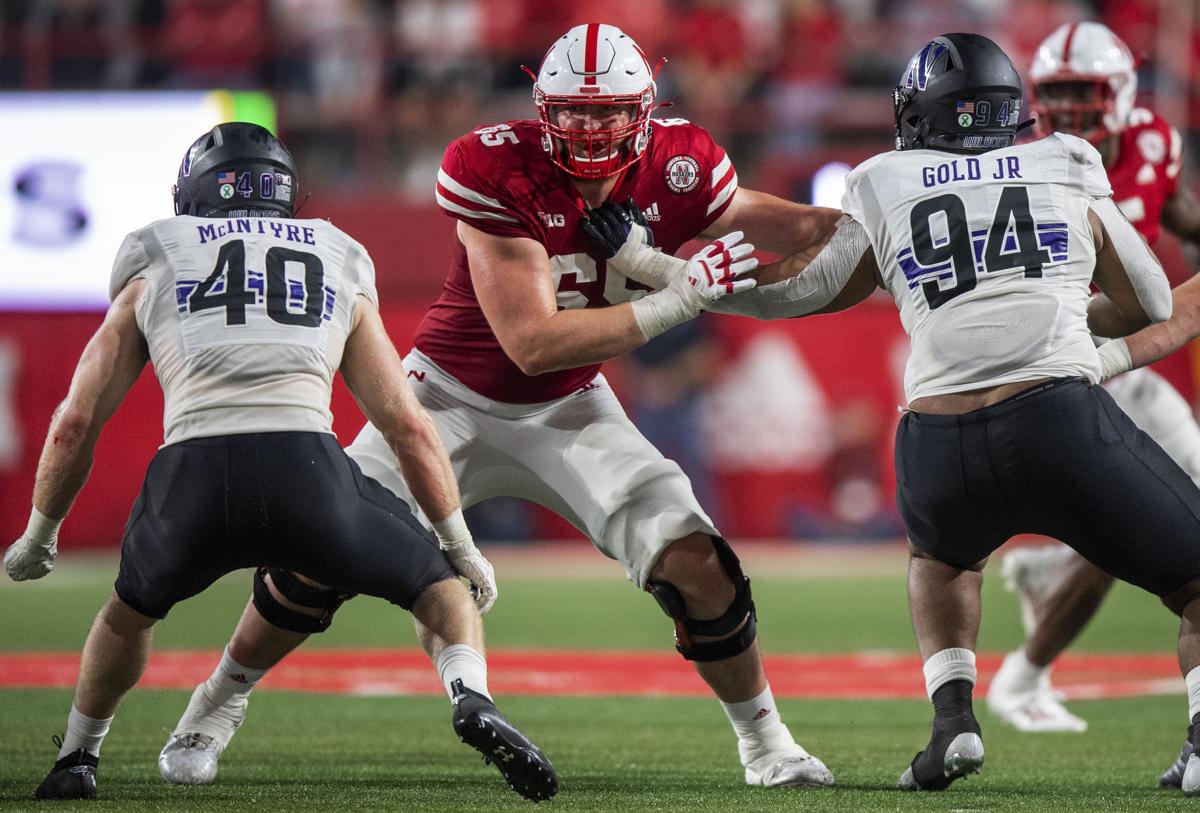 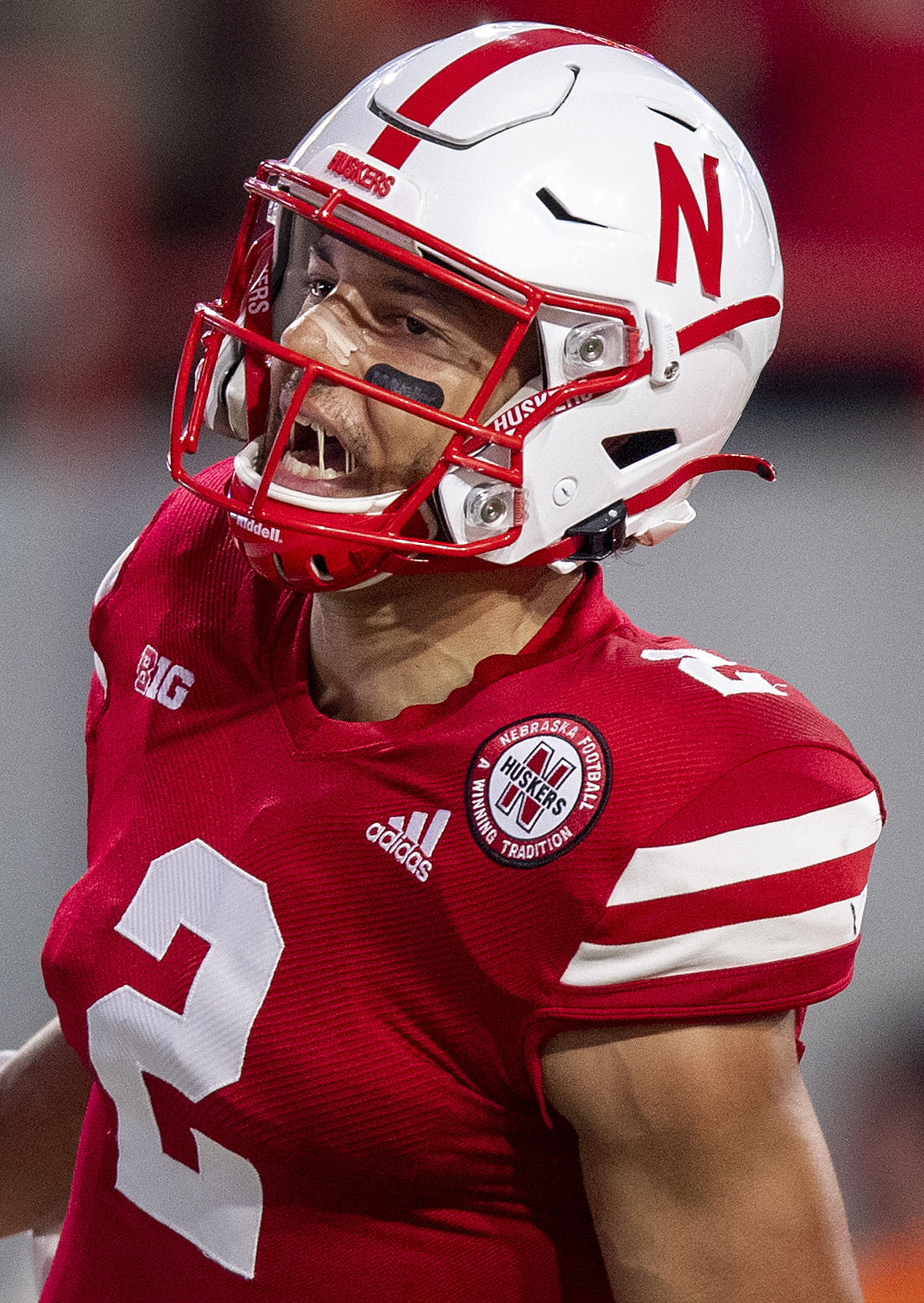 Nebraska quarterback Adrian Martinez scores in the first quarter against Northwestern on Saturday at Memorial Stadium.

It wouldn't be his style to take credit.

But maybe, just maybe, Raiola's pregame chat with the Husker offensive linemen helped matters. After all, it was easily the group's best overall performance of the season.

So, what exactly was his message?

"I told them, 'Just go play your asses off. I'm going to go outside and lock the gates to keep these (Northwestern) guys in here. Let's bloody them up, step on their throats.' I don't know if you can say that anymore ..."

He said it anyway. I think it's OK. It's still football, after all.

"I told them, 'Step on their throats for 60 minutes and when the clock goes to zero, tee it up and do it again next week. See what happens. Let's make a run in the Big Ten West,'" Raiola said.

Nebraska improved to 3-3 overall and 1-2 in the Big Ten behind a rushing attack that netted 427 yards, its second-highest total in a Big Ten game, trailing only a 458-yard uprising against Illinois in 2018. The Huskers' pass blocking also improved — Adrian Martinez wasn't sacked all night — as the new-look line was the impetus to the team finishing with 657 yards of total offense (8.9 per play).

Two Nebraska offensive linemen, left tackle Teddy Prochazka and left guard Nouredin Nouili, made their first starts as Huskers. Turner Corcoran, who had started the first five games at left tackle, switched to the right side.

Credit Nebraska's coaches — most notably Scott Frost and offensive line coach Greg Austin — for making the necessary changes and what appeared to be the right changes. The latter part of that equation is the key. Prochazka, a true freshman, and Nouili, a sophomore, helped spark a unit that consistently moved the line of scrimmage.

This week's opponent, ninth-ranked Michigan (5-0, 2-0), will provide a much stiffer test for Nebraska's offense.

Put it this way, the Huskers aren't going to score 56 points against the Wolverines. Half of that total would be somewhat surprising.

"I don't know how good Northwestern is, and I don't really care because I haven't seen that from Nebraska in a long time," Raiola said.

Make no mistake, Raiola said, Nebraska won the game because of its strong preparation during the week and will to win. He said it was an honor to speak to the linemen, and he obviously liked what he saw.

"Loved it," he said. "Loved how downhill they got. They got downhill really fast in the run game. My first thought was, 'Let's hit them downhill, right now.' And then you've got your uber-athletic quarterback who can run the option and get out on the edges."

Let's make something else clear: Raiola loves his alma mater. He's passionate about the place and what it's meant to him. He badly wants the offensive line to excel.

"I went up to those guys after the game and told them that I know their coach is proud of them, but damn, I wanted to tell them how proud I was of them," Raiola said. "That performance was something to be proud of. Let's do it again next week.

* Nobody's saying Martinez is the perfect quarterback, but if you're still dreaming up new ways to criticize him this season, you're probably not an opposing defensive coordinator.

The Nebraska junior quarterback is a headache for those guys, especially when you throw in the fact he's become something of an option wizard.

His overall confidence is evident.

"I was pretty confident going into the season," he told me early last week before the Northwestern game. "I would say that first game (a 30-22 loss at Illinois), I definitely didn't play the way I wanted to play. I found my way to get better, and we have as a unit as well. Take that however you want. But I'm feeling really good about where we are as a unit and where I'm at."

Martinez obviously feels good about his training and development. Along those lines, he had strong words of praise for his position coach, Mario Verduzco, who endured his share of criticism when Martinez struggled the past couple seasons.

Against Northwestern, the California native accounted for 259 yards of total offense, marking his seventh straight game with at least 250, an ongoing school record.

"Verdu has been nails for me, always has and always will be," Martinez said. "He does a great job of preparing me and the other quarterbacks. I'm just trying to bring it all up a notch this year as much as I can, and I feel like I've been doing it."

* Jim Harbaugh comes to town with a Michigan team that comes off a complete-game performance at Wisconsin. The new-look Wolverines are leaning hard on their running game — they ran the ball 44 times in their 38-17 win against the Badgers. Although UM finished with just 112 rushing yards (2.5 ypc), keep in mind that UW ranks first nationally in rushing defense, allowing only 45.3 yards per game.

Bottom line, Michigan ran well enough to set up its play-action game. The Wolverines stayed committed to running the ball. It's their identity.

One other thing to keep in mind: Michigan has allowed only one sack all season.

It plays clean and efficient football.

Yep, here comes Harbaugh. Should be a fun week around here.

Rewind: Huskers got run game going behind 'Teddy and Nouri bandwagon,' but much stiffer tests await

The young QB recruit saw a Husker win and caught up with an old friend who happens to be a blue-chip 2023 LB prospect.

"We still have a lot of work to do," Scott Frost said. It was the perfect response in the context of the program's recent history.

'Man did we run it better': Huskers roll up 427 rushing yards, seven TDs in 56-7 rout of Northwestern

A dream start. A bounce-back. A 49-point Nebraska victory over a Big Ten team. And now, a likely top-10 Michigan team coming to Lincoln.

That Big Mac sack campaign is getting a good two-week run. The Blackshirts getting pressure on the QB kicks off a wide-ranging Husker notebook.

No. 9 Michigan a favorite, but not a big favorite for Saturday showdown with Nebraska

Many lines from Las Vegas have the Wolverines as a 3-4½-point favorite against Nebraska.

Domann's stat line Saturday was unique. In fact, he became the first player in the FBS to produce one like it this season.

Red Report: Left side of OL played well; DL Rogers happy to be back from injury; 'stud' Betts coming on

Scott Frost said he saw improvement from his new-look offensive line, and that kicks off a jam-packed Monday notebook.

Michigan provided a rude Big Ten intro to the Frost era in 2018. Have the Huskers closed the gap?

Plenty of chatter Monday from the Huskers about a 2018 drubbing at the Big House. It's reasonable to assume NU is better positioned now.

The Word with Travis Vokolek: The violence of football, difficulty of playing tight end and a round of word association

Each week, we're taking a deeper dive with a Husker player for "The Word." Next up is Travis Vokolek, a tight end from Missouri

Nebraska quarterback Adrian Martinez scores in the first quarter against Northwestern on Saturday at Memorial Stadium.