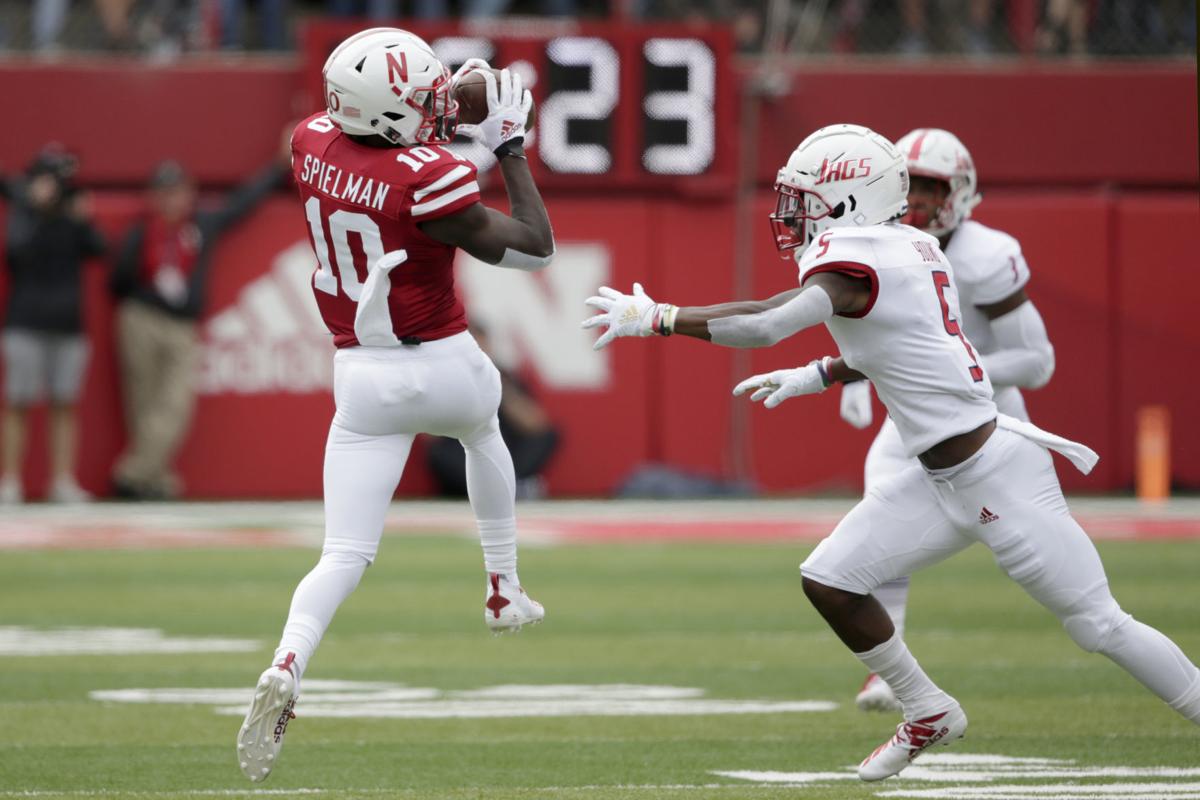 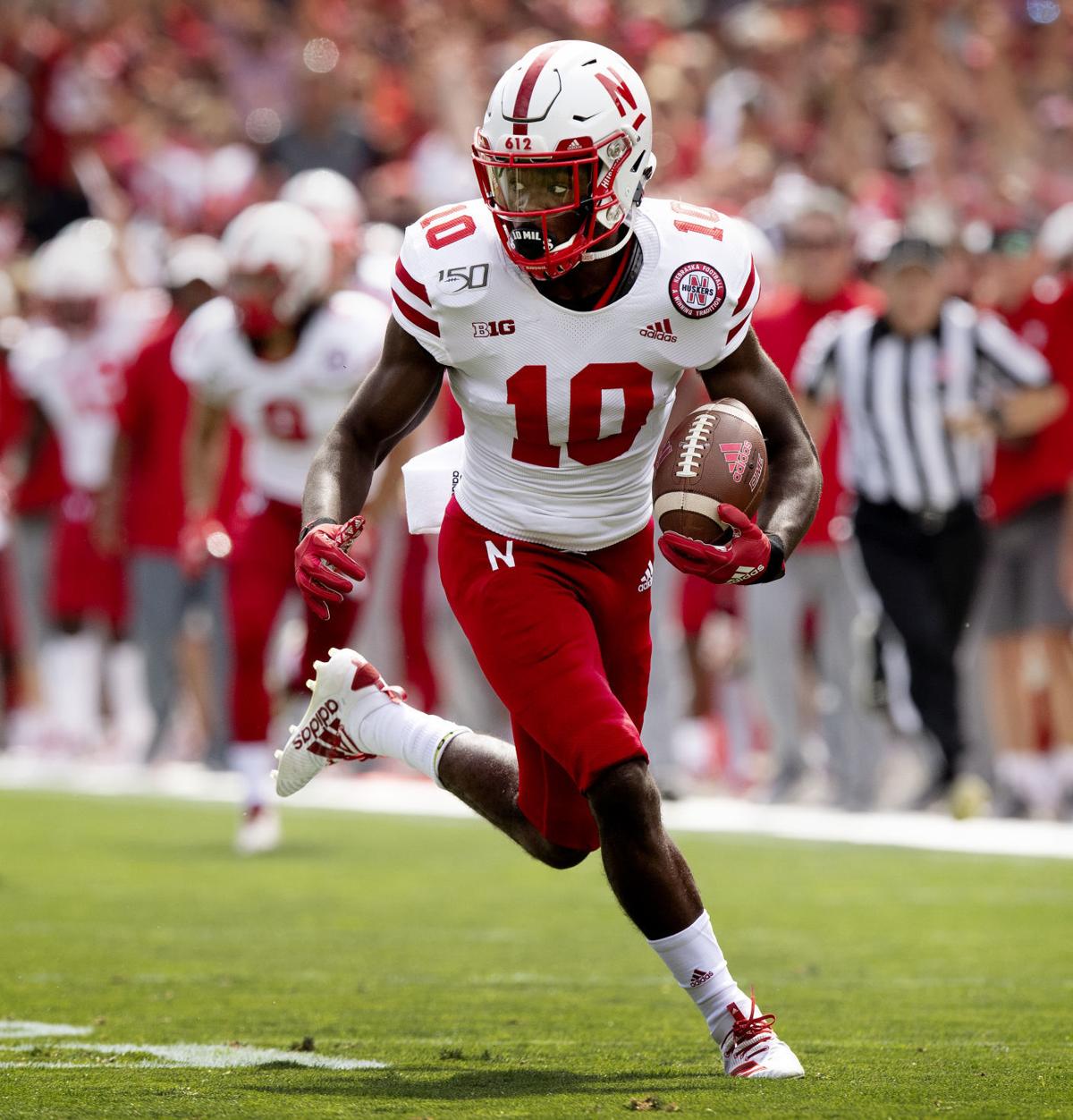 His teammates hear what a lot of folks say about JD Spielman’s personality.

Folks think they have a good read on Spielman.

“I hear in the media everyone say he’s kind of a quiet guy,” says Nebraska tight end Jack Stoll. “That’s not really what I see around here.”

Stoll grins as he discusses the Huskers’ most reliable receiver, as does cornerback Dicaprio Bootle.

“On the field, he’s a stone-faced guy,” Bootle says. “He’s really trying to get it done. He’s really trying to make the job happen. But off the field, he’s the biggest jokester. He’ll play pranks like hiding people’s phones, going into lockers and hiding people’s keys. Anytime there’s a joke on somebody, we automatically look at JD because we already know it’s probably him doing something crazy.

“Off the field, he brings life to our team.”

He also pumps life into teammates on the field. The 5-foot-9, 180-pound junior leads Nebraska this season in receptions (18) and receiving yards (383). In 25 career games at NU, he has 139 catches for 2,031 yards, ranking sixth in both categories on the school’s all-time charts.

He needs 51 catches and 716 yards to become the Huskers’ all-time leader in both areas.

Based on his performance this season, it’s hard to imagine it not happening.

To review: On one hand, you have a smiling prankster. On the other, a stone-faced competitor.

“On the field, he’s completely locked in,” Bootle says. “He’s also fiery. When he doesn’t make a play, he’s locked in trying to figure how he can make that play. When he makes a play, he explodes and gets loud. He does his little celebrations, and then it’s right back to the quiet JD just trying to pick apart defenses and trying to read them.”

A native of Eden Prairie, Minnesota, Spielman has reached both 1,000 and 2,000 receiving yards faster than any player in school history. Fifth-ranked Ohio State, which will visit Memorial Stadium on Saturday night, obviously knows all about him. After all, in two games against the Buckeyes, he’s recorded a total of 17 catches for 261 yards and two touchdowns.

He's on every defense's radar. His average of 81.2 receiving yards in 25 games ranks third nationally among all active FBS players with a minimum of 1,000 career receiving yards.

He’s earned the respect of his teammates and coaches, and not just the offensive coaches.

“I’ve got a great deal of respect for JD,” says Nebraska secondary coach Travis Fisher. “He was all over the field (last week against Illinois), taking hits from all over the place, and he was jumping back up, jumping in the huddle and playing full speed. That just shows the kind of toughness we have on this team and it also shows how much this team has come along."

Spielman finished with seven receptions for 159 yards in the 42-38 win against the Illini.

“Guess what, if there was somebody on that sideline in the game that was feeling a little banged up, they saw JD go through that and said, ‘Hey man, I gotta go now,'" Fisher says. "Credit to JD and credit to a lot of guys that are playing banged up. This time of year, everybody’s banged up. A tough guy’s going to step on the football field.”

Added Husker freshman speedster Wan’Dale Robinson: “That just shows he’s a warrior and that he’s going to rock for everybody. That makes everybody else feel like they have to do the same thing.”

Spielman leads mostly by example, but will speak up in his own measured way at times.

“He’s just kind of a guy who goes about his business,” says the 5-10, 190-pound Robinson, second on the team in both receptions (17) and receiving yards (195). “JD’s serious about his football. He wants to make sure he does his job and make sure everybody else does their job. That’s how he’s approached me, making sure I know what I’m doing. We interact with each other about what we’re seeing on the field.

He’s generally going to do it quietly. But after the pads come off, you just might see the other side.

“He’s just really, really funny,” Robinson says. “Everything’s kind of a joke with him. He just kind of brightens up the mood anytime we’re around each other. He’s kind of like a brother to me. Anything that brothers would do, like play fight and mess with each other, that’s how we are. That’s how we always are as receivers.”

But you know who leads the way in the group. It’s the kid from Minnesota wearing a mischievous grin.

Adrian Martinez’s often looking toward JD when Nebraska needs a first down.

“He knows when it’s time to turn it on,” Stoll says. “He’s just a playmaker. Whenever his number’s dialed up, he’s going to find a way to make a play, period.”

See photos from ESPN College GameDay setting up outside East Stadium at the University of Nebraska-Lincoln.

Facilities FAQ: Everything you need to know about the Huskers' $155 million North Stadium expansion

What are the numbers, where will it be, how long will it take and other questions answered.

Husker senior DB Jackson says showdown vs. Buckeyes a game 'you kind of lick your lips about'

Pick a college football program, you’ll find similar sentiment about weeks like this.