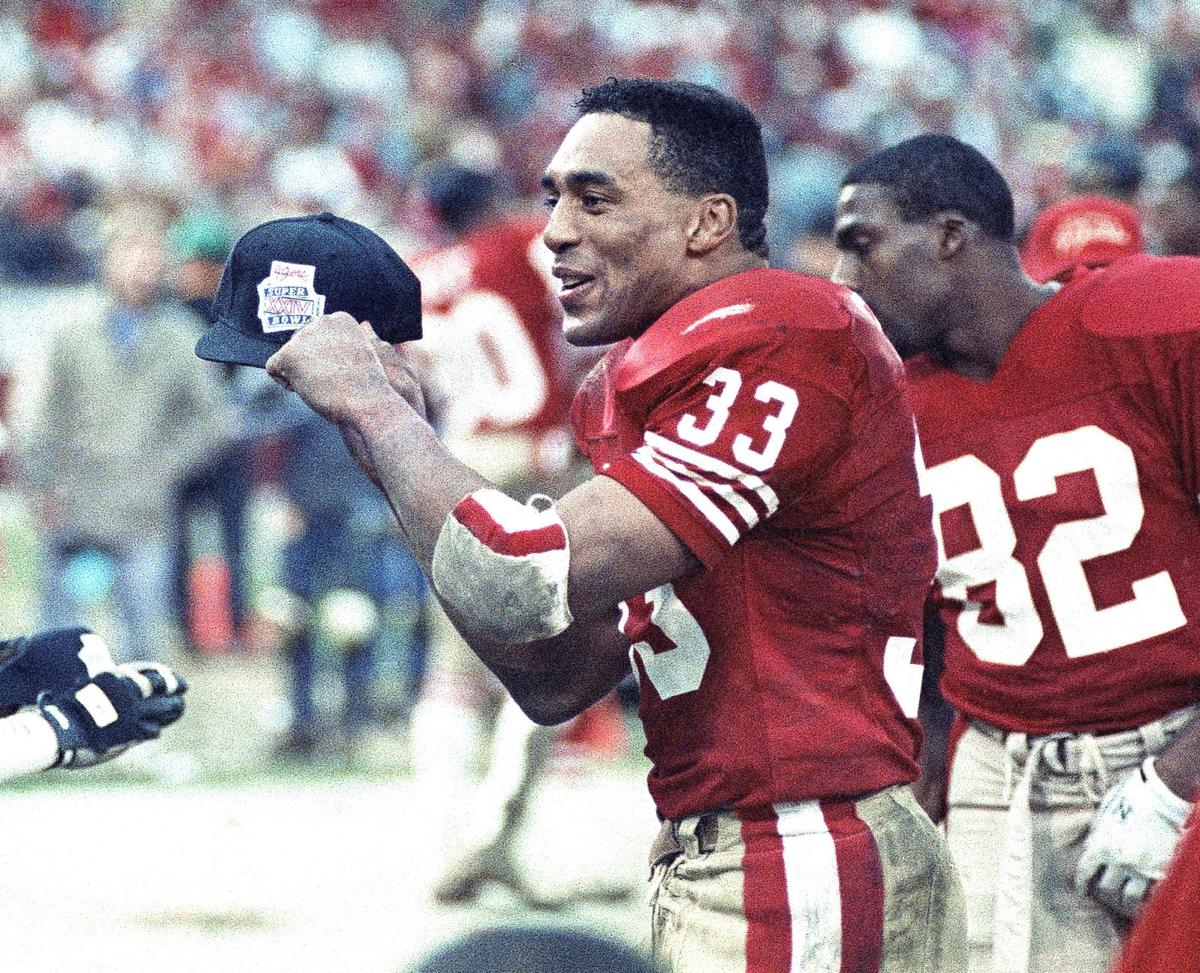 San Francisco's Roger Craig shows off a Super Bowl cap in the fourth quarter during the 1990 NFC Championship Game against the Los Angeles Rams. 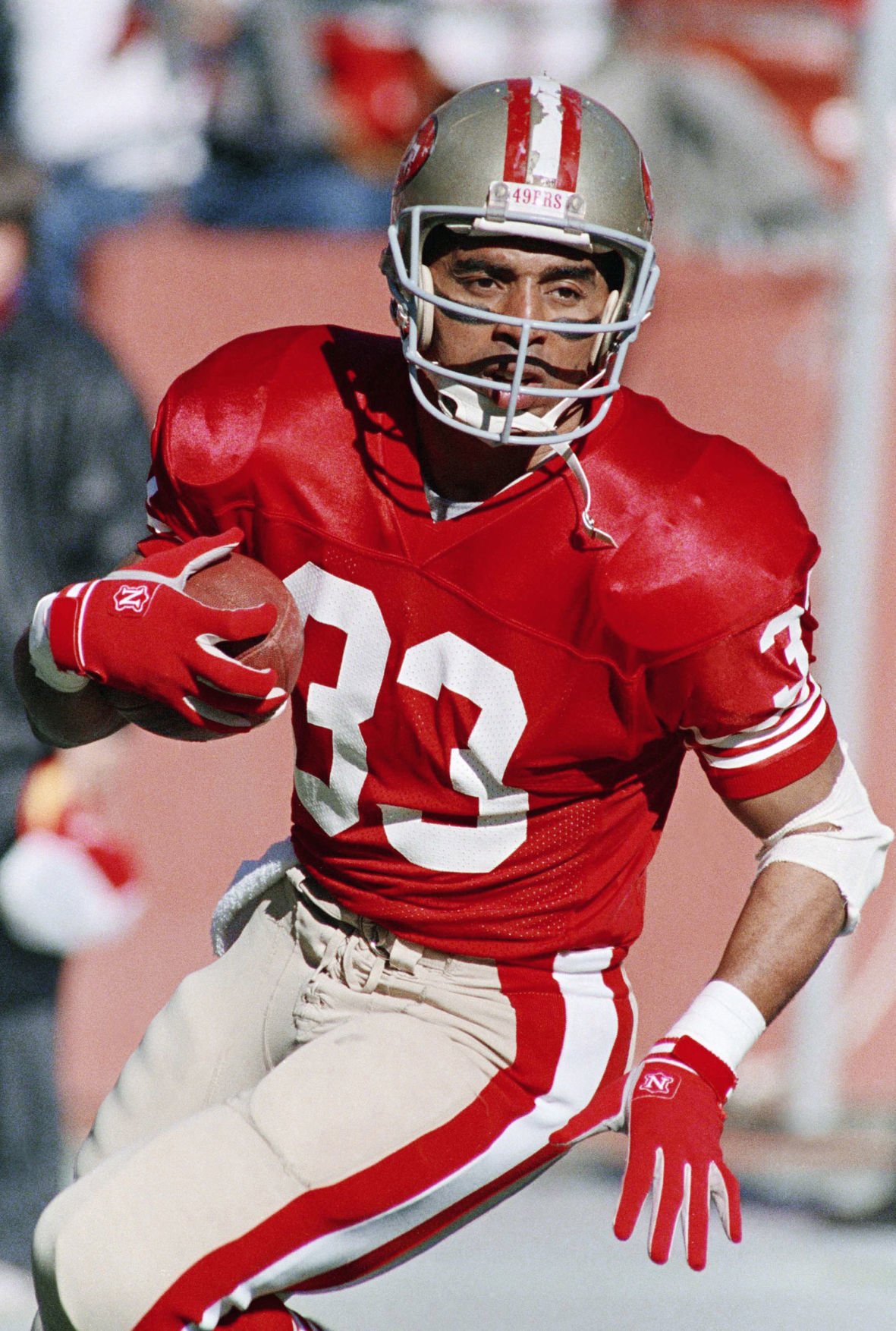 Roger Craig was the first "thousand-thousand" player in NFL history. Yet, the former Nebraska standout missed the NFL Hall of Fame — again.

Being an older guy has its benefits.

To wit: "Veteran" Nebraska football fans distinctly remember running back Roger Craig coming around the corner of the line with his knees high in the air. Many Big Eight defenders from the early 1980s remember those knees; you tend to remember it when your head gets knocked back violently by a blow to your chin.

"He ran the same way in elementary school at the park in pickup games," says former Nebraska tight end Jamie Williams, who grew up with Craig in Davenport, Iowa.

They were teammates at Davenport Central High School as well as with the Huskers and San Francisco 49ers. So, yeah, Williams speaks passionately — and eloquently — about why Craig should be in the Pro Football Hall of Fame in Canton, Ohio. Alas, Craig was not among the 10 seniors — those who played their last season more than 25 years ago — named last week to the Hall's Class of 2020.

Discipline, respect and 400-meter repeats: Why a former pupil says Lubick and Frost are 'a perfect fit'

Craig was a pioneer of sorts in the NFL, the first player to record a "thousand-thousand" season when he collected 1,050 rushing yards and 1,016 receiving yards in 1985. He actually led the league that season with 92 receptions. He also had 2,036 total yards from scrimmage in 1988 with 1,502 of those yards coming on the ground.

By the way, he's a three-time Super Bowl champion.

It all started back at Herington Park in Davenport, a few blocks from Central High. It was the 1970s, so there were no video games. Kids actually spent time outdoors. Don't get me started.

"In our free time, we ran around and played catch with each other," Williams recalls.

Nebraska obviously didn't throw the ball a lot during the early 1980s. It was student body left and student body right. But in the NFL, some semblance of offensive balance is typically required. Innovation is encouraged. The late Bill Walsh, the former Niner head coach, was an innovator. He's credited with devising the West Coast offense, which revolutionized the game — and helped make Craig an NFL legend.

In 11 NFL seasons, Craig accumulated 4,911 receiving yards and 17 touchdown receptions to go along with 8,189 rushing yards and 56 TDs on the ground.

Marshall Faulk and Christian McCaffrey are the only other "thousand-thousand" players in NFL history. McCaffrey did it this season with the Carolina Panthers (with former Nebraska long-snapper and defensive back Jake Peetz as his position coach). Faulk, who did it in 1999, was inducted into the Pro Football Hall in 2011.

Meanwhile Craig waits, even though he made four Pro Bowls and was the 1988 Associated Press Offensive Player of the Year.

Williams and Craig played together in Super Bowl XXIII, when San Francisco defeated Cincinnati 20-16. Williams recalls Craig's words to him during a TV timeout.

Williams finished the sentence: "Who will?"

Nebraska fans of a certain age remember Craig as a punishing runner. As a junior in 1981, while sharing time with up-and-coming sophomore Mike Rozier, he rushed for 1,060 yards and was named second-team All-Big Eight. Rozier earned first-team honors that year. That's not a typo. The Husker offense was that potent. So, then-head coach Tom Osborne had a dilemma at I-back.

Craig, though, agreed to a request by Osborne to play fullback in the same backfield as Rozier. Three years later, Craig was playing fullback and helping the Niners win the first of his three Super Bowl rings.

How did Craig go from catching only 16 passes in college to being so prolific in that regard in the NFL? Williams said part of the reason stems from the Niners' culture. After all, this was a franchise that boasted Jerry Rice, Dwight Clark and John Taylor.

"I can't tell you the number of balls we'd catch in the offseason," says Williams, a 49er from 1989-93 who later became an associate athletic director at Nebraska. "Roger could run inside the tackles all day and then turn around and catch flare passes or option routes. And he never got in trouble. He did a lot of good community service. You've never read any junk about Roger Craig."

No cheering in the press box, I know, but I genuinely hoped I'd be reading this month about Craig being selected for the Hall. There’s an argument against him that points to his 8,189 rushing yards and 56 rushing touchdowns falling outside the top 40 all-time. He also fumbled 42 times in 11 seasons of regular-season play.

But this seemed like the year it would happen for Craig as the Hall expanded its class to 20 members as part of a centennial celebration. Usually only a couple seniors make it, as opposed to 10 this year.

You have to wonder if Craig, 59, will ever get the call. He isn't the type to lobby for himself.

"I do think Roger wants to get in," Williams says. "It's a very important thing."

Of course it is. It would seem important for the Hall to recognize trend-setting players. Craig punished defenders with that high-knees style and also became a high-grade pass-catcher at a time when it was unique at his position.

Nebraska appears likely to open 2023 season on a Thursday night at Minnesota.

Nebraska hosted a big group of Class of 2021 prospects on campus this past weekend for a junior day, including several players from the region.

Bill Moos speaks openly about his desire for the Nebraska-Iowa football rivalry to gain steam. Maybe recruiting battles could help.

Recruiting Ticker, Jan. 23: A few young QBs on the Huskers' radar screen for 2021, beyond

Nebraska's quarterback room is plump with talent. But recruiting never stops. Scott Frost and Mario Verduzco have their eyes down the road.

Steven M. Sipple: It's easy to understand why NU fans may regard Frost hire with skepticism

The last time a Husker head coach brought in a new coordinator, it was a disaster. Bottom line, Husker fans have been burned too many times.

The latest in-state scholarship offer from Nebraska is to a player who's just halfway through his high school playing career.

Tony Butler is the third 2020 senior to leave the team in recent days.

In talking to multiple people about Nebraska offensive coordinator Lubick’s past as a recruiter, at least one theme emerged: He’s a grinder.

According to reports, the former Nebraska leader Pelini will make $2 million per season with the Tigers.

The XFL season begins in less than two weeks and seven former Nebraska players are on rosters in the eight-team league.

San Francisco's Roger Craig shows off a Super Bowl cap in the fourth quarter during the 1990 NFC Championship Game against the Los Angeles Rams.

Roger Craig was the first "thousand-thousand" player in NFL history. Yet, the former Nebraska standout missed the NFL Hall of Fame — again.