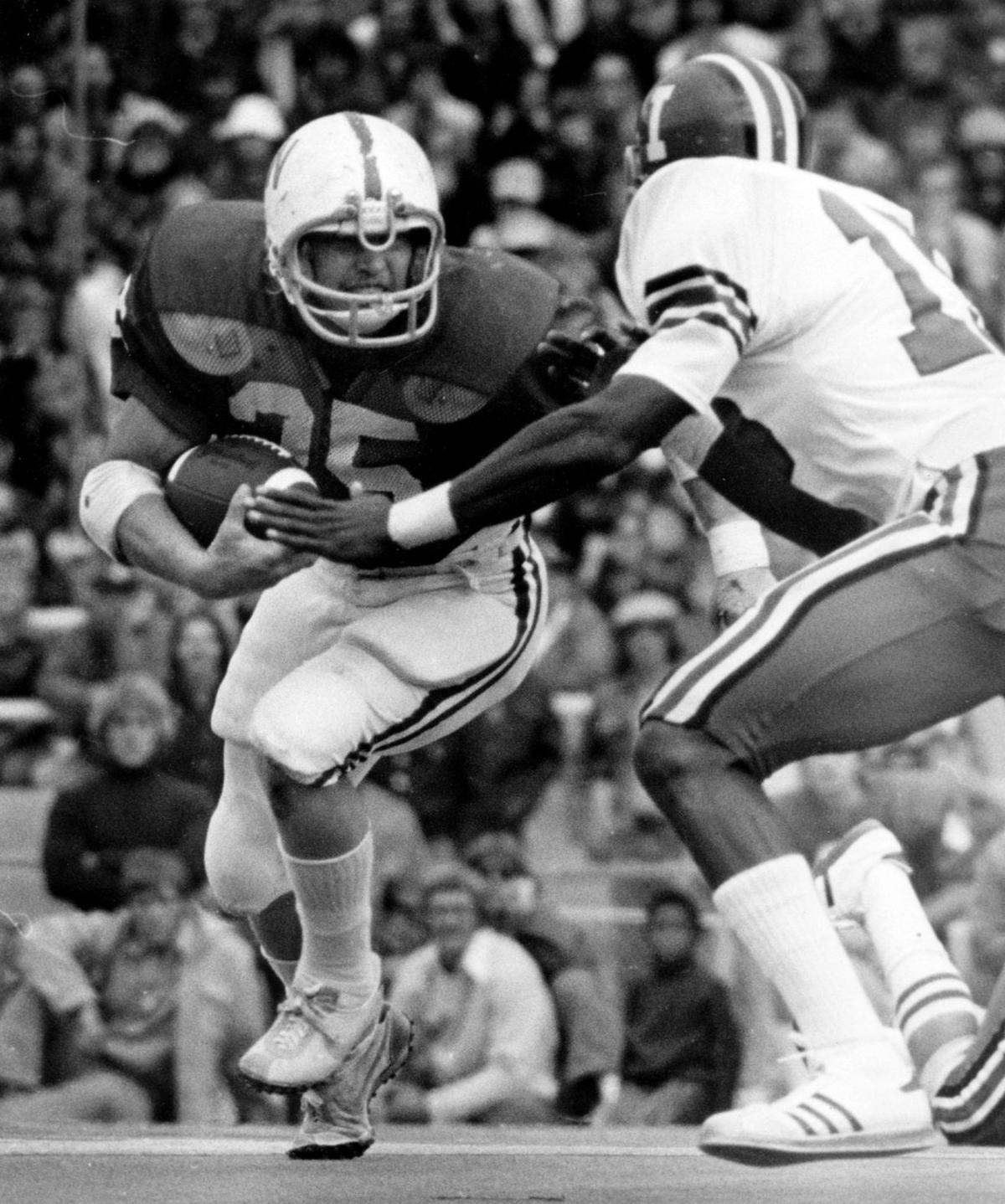 "Tough" Tony Davis wasn't afraid to lower his head and take on a defender. 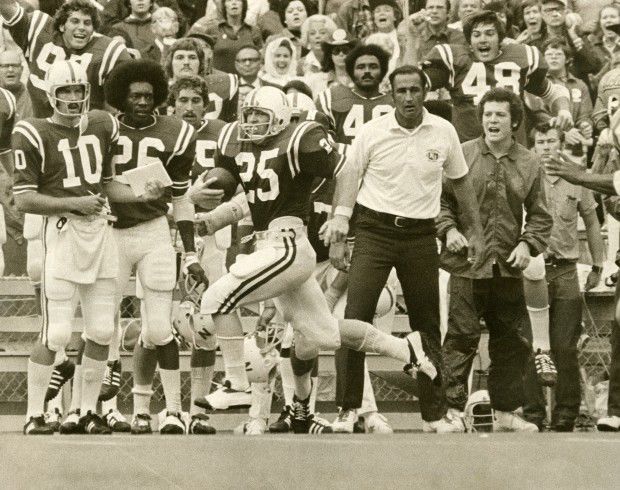 Tony Davis finished off the Bruins with this 43-yard touchdowns run at Memorial Stadium in 1973.

If you were a kid following Nebraska football during the early 1970s, chances are one of your favorite players was Tony Davis.

He played the game like it was meant to be played — at full-tilt. He was brash, passionate, intelligent. He had a bit of a mean streak. And, yes, he had talent.

I was 9 years old in 1975, Davis' senior season at NU. He was one of my favorite athletes. So, it still seems surreal sometimes when Davis calls from his Colorado home to ask about the Nebraska football program — for which he cares deeply.

He cares deeply about the sport in general and the positive impact it can have on kids. Which is just one reason it's fitting that Sunday he was inducted into the Nebraska High School Sports Hall of Fame during a ceremony at Lincoln East.

"Honestly, this is more about the guys I was raised with, and kids I played the game with, than it is about me," said the 63-year-old Davis, who earned his nickname "Tough Tony" well before he became a star all-around athlete at Tecumseh High School.

"This is a community honor," he added. "I'm more fired up for Tecumseh than anything else."

It wasn't until recently that I learned his given name is Michael E. Davis. He said a former Tecumseh High assistant coach came up with the "Tough Tony" nickname when Davis was 10 and growing up across the street from the school.

"I'd go over to the field and the older kids would be running me over, it was rough, and he said I'd just keep going — I wouldn't cry or anything," Davis said. "He said, 'Hell, you're Tony the Tiger.'"

Turns out, "Tough Tony" Davis had a nice ring to it, and he rushed for more than 5,000 yards for Tecumseh before graduating in 1971.

He left as the school's leading rusher and was Tom Osborne's first 1,000-yard rusher in a season.

In 1991, Davis was inducted into the Nebraska Football Hall of Fame.

So, when Davis talks football, I always listen closely, though not all former players understand the game at a high level. Not all follow it closely after their playing days. But Davis does.

He can't say enough good things about second-year Nebraska head coach Mike Riley, with whom he visited Friday at practice.

Davis liked just about everything he saw in Saturday's 31-16 home win against Illinois.

"We're lacking a little in the defensive line right now, but that's going to improve," he said. "More importantly, I see a change in attitude. It's pretty evident. These guys buckled down and have started playing good ball.

"Tommy Armstrong moves the chains," Davis said of the senior quarterback. "I think the more that's on the line, the better he plays."

Davis recalled a conversation he had with Armstrong during Tommy's sophomore year, when Davis told him to try to enjoy every moment as a player "because you'll blink and it'll all be gone."

In a blink of an eye, you might even find yourself in a hall of fame, or a couple of them.

* Here's something I wish I knew: How many ex-Huskers went on to be named MVP of an NFL team?

There can't be many.

Davis was MVP of the Cincinnati Bengals in 1977. How many others? Anyone know?

* Nebraska defensive coordinator Mark Banker had to pause to compose himself following Saturday's win after a reporter brought up Sam Foltz to help illustrate how much adversity the Huskers have overcome since July to get to 5-0.

"I think for one thing, Sam lives in all of these guys," said Banker, his voice cracking with emotion. "I truly believe that. That kid meant so much ... I think he's just there. Maybe it's not conscious, but it's definitely subconscious with them."

Listening to Banker, you get the distinct feeling Nebraska has bonded as a team. If there isn't good chemistry, I'm reading it all wrong.

"These guys, they play for each other," the coach said. "I mean, it's a brotherhood. This Blackshirt thing for us on defense has become real. We talk about it. But talk is one thing. You've got to live it. And maybe we're not playing like the Blackshirts of old because we're giving up too many points and yards, I don't know. But these guys aren't going to let anything get in their way."

* Is it just me, or are football players making more acrobatic one-handed catches than ever? Michigan cornerback Jourdan Lewis' late-game interception Saturday to help hold off Wisconsin — a twisting, back-handed grab — was yet another example of athletic brilliance.

A minuscule fraction of the population can make that sort of play. Which is why athletes are so highly paid. Pro athletes, I mean. But I digress.

* By the way, what a college football season so far. No wonder we miss it so much when it's gone.

Yays and Nays: Huskers finishing strong, but know they must be sharper early

By the end of Saturday night, residents in the state of Nebraska had probably heard the numbers repeated so often that they knew them as well …

Former Husker assistant coach Milt Tenopir was remembered at a celebration of his life Sunday at Memorial Stadium.

Steven M. Sipple: With Huskers on bye week, a chance for chills and even a few tears

With Nebraska on a bye week, I watched 12 straight hours of college football Saturday, and jotted down 50 thoughts.

"Tough" Tony Davis wasn't afraid to lower his head and take on a defender.

Tony Davis finished off the Bruins with this 43-yard touchdowns run at Memorial Stadium in 1973.