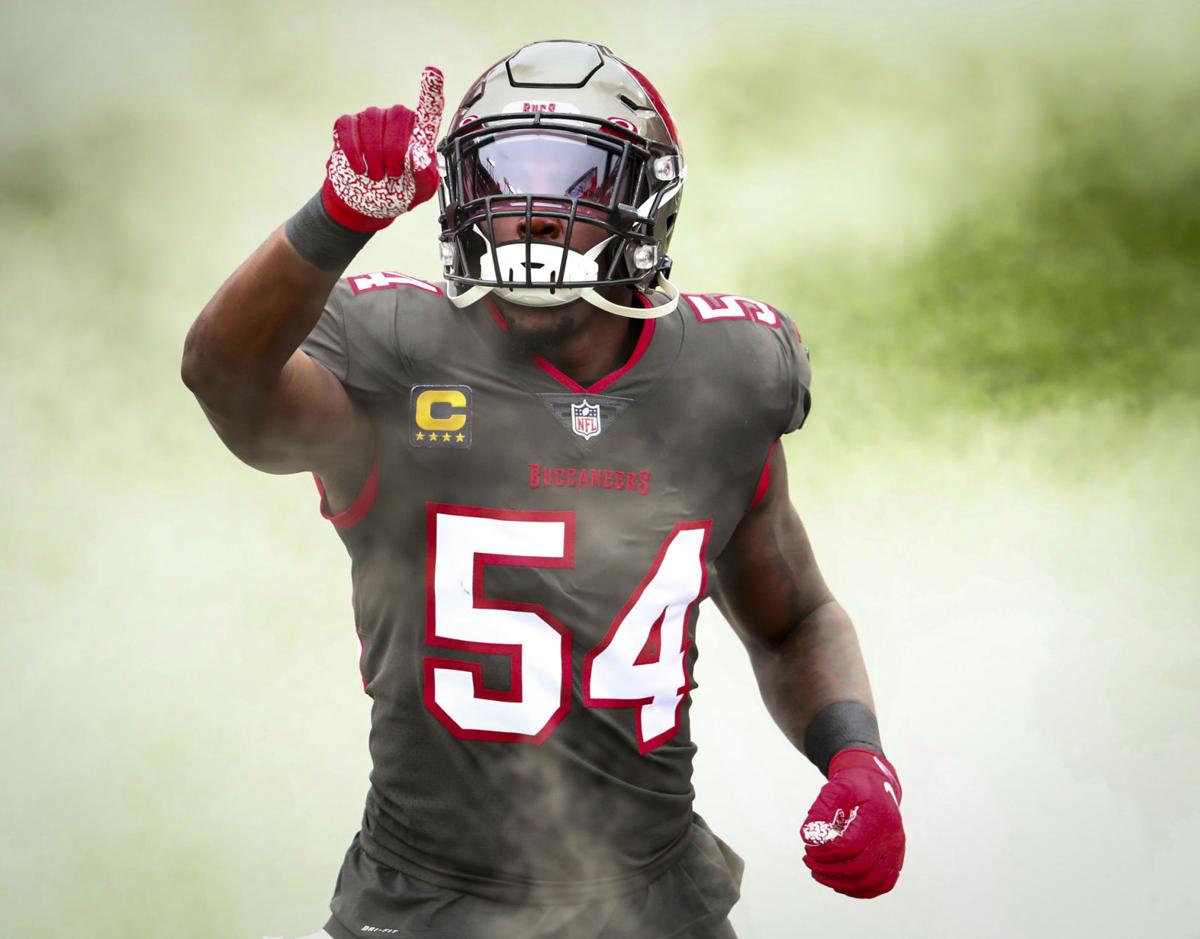 Buccaneers inside linebacker Lavonte David points to fans as he runs onto the field prior to a game against the Falcons on Sunday. 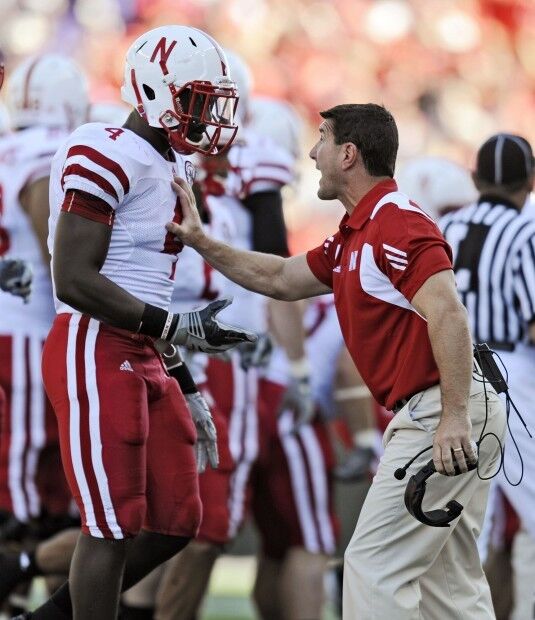 Nebraska football fans' respect for Lavonte David is so thorough and enormous that it actually might be interesting to hear about any weaknesses as a player he might have had at NU.

Remember, we're talking about a guy who had 152 tackles in 2010, which remains a school record.

"Yeah, he definitely had a weakness," Mike Ekeler, the former Nebraska linebackers coach (2008-10), said earlier this week. "He was selfish."

"Dude, he made every damn tackle, and no one else could make a tackle," Ekeler said. "That was his one weakness."

How good was David? He missed one tackle all season — yes, only one, Ekeler said.

It was against Colorado, in the regular-season finale.

"They were going into the north end zone, on the left hash," the coach recalled. "Inside zone. In the 'B' gap. Wide open. The guy made him miss, and that was the only time all year. That's a fact."

Ekeler still marvels at David's prowess. Same goes for Nebraska fans, many of whom will be watching as the Tampa Bay Buccaneers (11-5) play the Washington Football Team (7-9) at 7:15 p.m. Saturday during the NFL's Wild Card Weekend. David, whose 117 tackles this season rank second on the team, is joined on the Bucs' defense by former Huskers Ndamukong Suh and Khalil Davis.

What's more, Tampa Bay's general manager is Jason Licht, who lettered as an offensive lineman at Nebraska in 1991, a third-year sophomore toiling behind the likes of Will Shields and Brenden Stai. Seeking more playing time, he transferred to Nebraska Wesleyan and became a defensive tackle.

Ekeler, now the special-teams coordinator at North Texas, also keeps close tabs on former Nebraska linebacker Will Compton (2008-12), who's in his second go-round with the Tennessee Titans (11-5). They'll take on the Baltimore Ravens (11-5) at noon Sunday in Nashville, Tennessee.

Compton is the smartest player he's ever coached, Ekeler said. However, no offense to Will, he isn't quite as talented as David.

"When I was a kid, we had mice that would run through our kitchen," Ekeler said. "We had this pocket door that pulled out. There was probably a quarter-inch between the floor and the door. I was chasing a mouse once and he got flat as a pancake and slid through. That's Lavonte David. He could slip through a crack. It was incredible. It was like he was (Harry) Houdini.

"He can contort his body like a mouse, find his way through traffic and make the tackle."

This helps explain why David on Friday was named a second-team All-Pro. He was a first-team All-Pro selection in 2013 and a Pro Bowler in 2015. He's obviously still playing at an elite level. To wit: He was the NFC Defensive Player of the Month for September.

He's the type of player that coaches study, literally.

For instance, Ekeler marvels at David's ability to set up blocks.

"After coaching him, I definitely studied him, especially that part," Ekeler said. "I didn't teach him that. Setting up blocks is all about relationships. Where's the ball? Where's the block? How much space does the defender have? And you have to make a full-speed decision on how you're going to defeat the block and go make a play. There are obviously different techniques to take on a block.

"Well, Lavonte, with just his natural instincts, had such an unbelievable ability to make those decisions. I probably have 100 clips on my teach tape of Lavonte David setting up blocks. A lot of what I teach to this day is because of Lavonte."

Ekeler said David is an extremely intelligent person, and that intelligence obviously helps him on Sundays. That might come as a surprise to people who put stereotypes on junior-college players. David came to Nebraska from Fort Scott (Kansas) Community College. He left NU in 2011 as the school's fourth all-time leading tackler despite spending only two seasons there.

His intelligence is part of the reason David has lasted nearly a decade in the NFL. But there's another reason.

"He absolutely loves football," Ekeler said. "The first question an NFL scout asks you when they're looking at one of your guys is, 'On a scale of 1 to 10, how much does he love the game?' Lavonte is probably a 12."

Why is that such an important trait?

Compton, who recorded a team-leading 110 tackles for Nebraska as a senior in 2012, also "eats, sleeps and drinks football," Ekeler said.

"I've said it before, there's not a smarter player in the NFL than Will Compton," the coach said.

Before Compton's senior season at Nebraska, he went into head coach Bo Pelini's office and asked Pelini to teach him how to break down film.

"So each Sunday, as the coaches broke down opponents, Will would break them down, too," Ekeler said. "I'm not so sure Will Compton's breakdowns weren't better than most coaches."

The highest-level performers are always looking for edges. All the time. But especially at playoff time. ’Tis the season. Enjoy.

Former Huskers playing in the NFL

Peetz, a native of O'Neill, was a walk-on for Nebraska during the early 2000s.

We're blending new content with frequent trips to the archive library on a week-by-week ride through Nebraska's storied 1970 season.

Cincinnati Bengals head coach Zac Taylor is promoting assistant Troy Walters to wide receivers coach, according to a report from ESPN on Saturday.

Might the Huskers be in the mix for a grad transfer receiver?

A transfer wideout from out west told the Journal Star on Sunday that he's announcing his next college destination Monday.

Steven M. Sipple: Rimington: 'Your plow horses up front can't be the ones making mistakes'

All-time Husker great Dave Rimington talks about this year's winner of the Rimington Trophy and weighs in on NU.

When he first entered his name into the transfer portal, Samori Toure was overwhelmed by the response. He explains why the Huskers stood out.

'Everything will turn around eventually': Finally, Lavonte David to take center stage at Super Bowl

He's been snubbed from Pro Bowls. He's been on six last-place teams. But Lavonte David — and his "stay the course" mantra — are ready to shine.

Buccaneers inside linebacker Lavonte David points to fans as he runs onto the field prior to a game against the Falcons on Sunday.