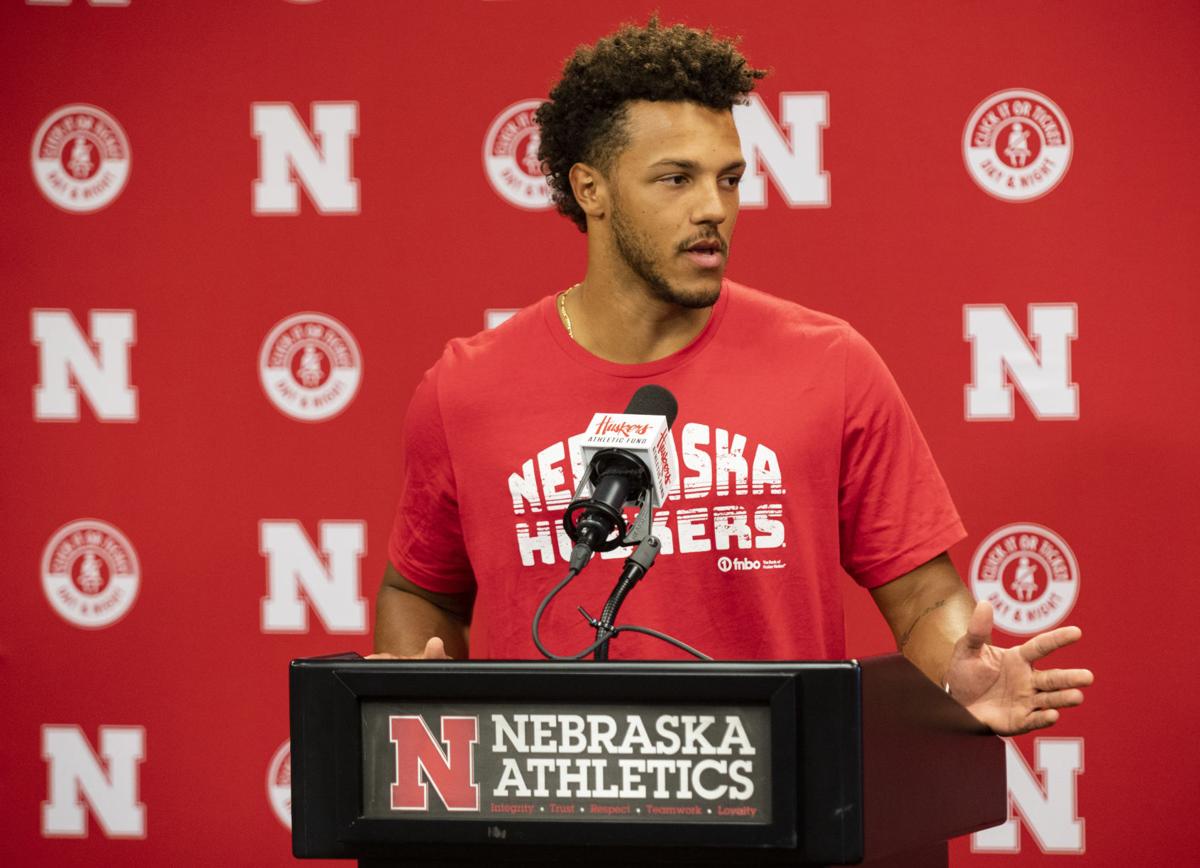 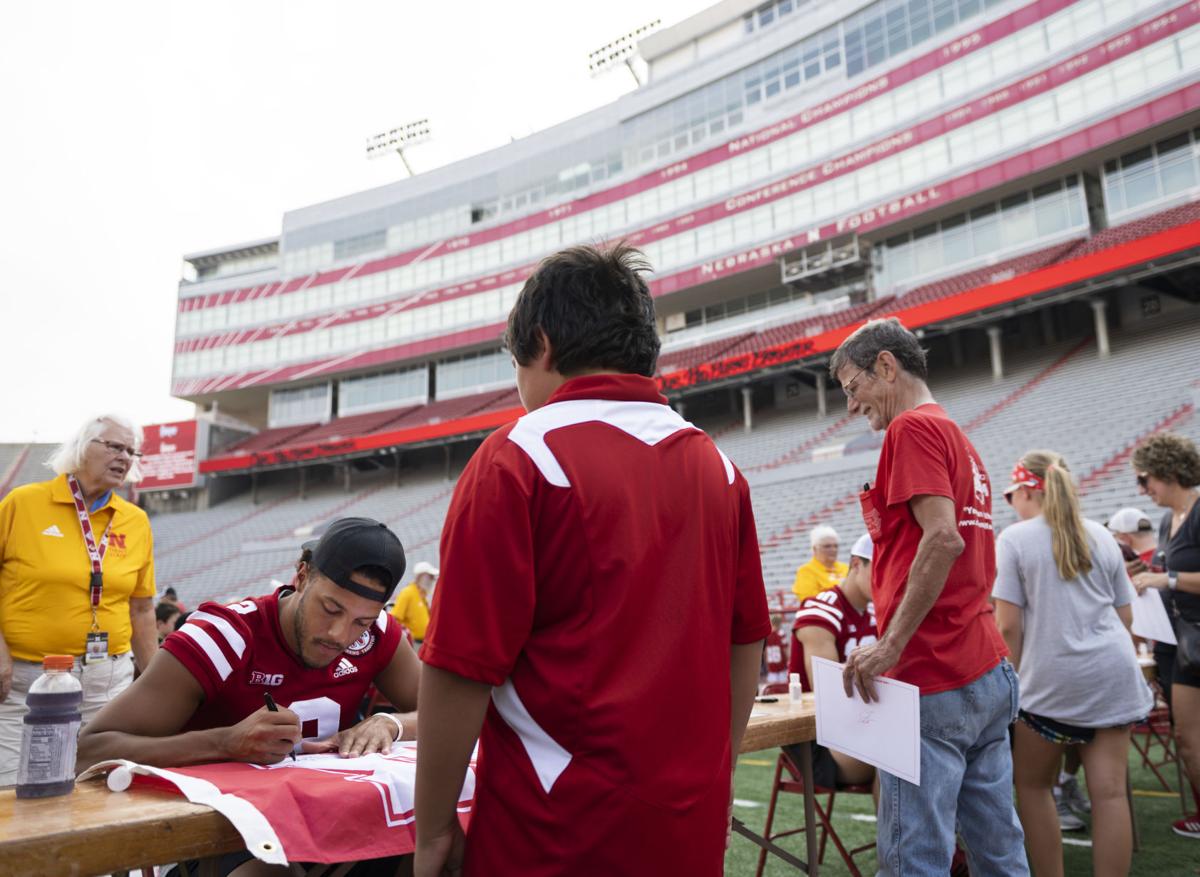 You've given up on Adrian Martinez. You know who you are, admit it.

Oh, let's be clear, not everybody has given up on the Nebraska junior quarterback. In fact, there's not much middle ground in the discussion. You either think he can end his collegiate career on a strong note — be it this season or next — or you think he's an average player who will finish it out that way.

I'm in the former category, in part because I believe in people like Martinez — good people, selfless people, talented people — and in part because I've seen him operate at a very high level. He's done it. I also know this: He's one of the very best pure football players on Nebraska's roster.

Watch him run the ball better than anyone on the team and tell me that's not the case.

Now, lo and behold, there's something else the pro-Martinez camp can use as fuel for their fiery discussions.

The pressure's off him — much of it, anyway. In his mind, at least, it's off. And really, that's all that matters.

Along those lines, it matters greatly what Nebraska junior tight end Austin Allen told reporters about Martinez last week during Big Ten Media Days in Indianapolis. He said the starting QB's mental approach is that of a player "with nothing to lose."

Does Martinez understand Allen's comment? Does it accurately represent his mental state?

"Definitely," Martinez told reporters Thursday. "I love that mindset. I think playing free and playing with a chip on your shoulder is sort of what that means to me, and I love it. And I love the fact one of my teammates recognizes it. I think it's been a point of emphasis for myself, just practicing like that and working out like that."

He said he hopes the mindset "engulfs the team and it can become our motto."

This particular Nebraska team doesn't strike me as a big motto team or slogan team. What I gleaned from several players Thursday was it's a team that is tired of losing. It almost seems like a team that's tired of talking about what it can accomplish. It just wants to do it. It's a good vibe, the right vibe, and much of it emanates from you-know-who — the quarterback that many of you have counted out.

Good luck with that. Good luck with pointing to the fact Martinez was benched in the second game last season. And, yes, in that game at Northwestern, his footwork looked awry as he completed only 12 of 27 passes and threw an interception late in the third quarter that sucked the wind out of our entire state.

If you know Martinez, though, if you're familiar with him at all, you knew this story wasn't finished. You figured he would come back. He was too important to this team, to his teammates, not to become a factor again at some point. He did come back, in a big way.

The California kid clearly caught a second wind during the final four games of the 2020 season, as he completed 71 of 105 passes (67.6%) for an average of 195.5 yards per game. He threw four touchdown passes and just one interception. In the final two games, he rushed 38 times for 253 yards (6.7 per carry) and three touchdowns. Granted, he turned the ball over four times against Rutgers in the season finale. But when he wasn't turning it over, he was downright electric.

And now he feels downright comfortable. At peace. God bless him. Peace can be incredibly hard to come by as a Nebraska quarterback.

"For me personally, it's been a heck of a journey," he said. "Everything that I've been through on the football field, and off of it, has led me to this point right here. I truly believe I have nothing left to lose, and just to enjoy it and play at the very highest level I can. I'm doing everything I can to reach that level."

Bank on him reaching a high level. That chip on his shoulder will help matters. In that sense, he feels he has plenty to prove. He wants to show he "can be every bit of the player I aspired to be when I first got here.

"That means playing at a higher level, playing more efficient, no turnovers," he said. "Those key areas for me I think are key areas for our unit and team as well. Gritty in the details. Honestly, we've left a lot out on the table, and I think this year we have an opportunity to gain that back. That's what 'prove it' means to me."

Because COVID-19 put a freeze on student-athlete eligibility, Martinez has two seasons of eligibility remaining. He said he hasn't made up his mind about perhaps playing two more seasons. Wouldn't that be something? He's already cashing in on his name, image and likeness. Hooray for that. But he doesn't let that stuff go to his head. He's mature. Grounded. In peak physical condition.

Here comes a big comeback story. I can feel it. The young man embarks on the 2021 season in an excellent frame of mind. Perhaps a perfect one.

Momentum, pressure, identity and jobs on the line: Six storylines as the Huskers begin preseason camp

Nebraska plays Illinois in less than one month. Let that sink in. As such, here's a six-pack of storylines to monitor this fall.

Fan Day is Thursday at Memorial Stadium. Here are some final reminders before you head there

The Nebraska Athletic Department has provided an updated list of recommendations in the wake of the COVID-19 risk dial moving to yellow.

With his sixth season on deck, JoJo Domann ready to embrace role he saw others manage in 2016

How long has the linebacker from Colorado been around? He forced a fumble in the 2016 Music City Bowl. You know, when NU won nine games.

Despite the heat, Husker fans turn out to meet players and coaches at Fan Day

Players and coaches were seated in the west of the stadium in the shade, smiling and taking selfies with fans who brought everything from foam fingers to home decor signs to be signed.

At the college level, the Huskers believe he could end up either at tackle or at guard.

The expectation? NU is deeper and more talented at the skill positions. The reality? Most of those players are new and inexperienced.

All-time Nebraska great Ahman Green, who retired from the NFL in 2009, coaches e-Sports at Lakeland University. But he feels a tug to coach football, and would come home to do it, he says.