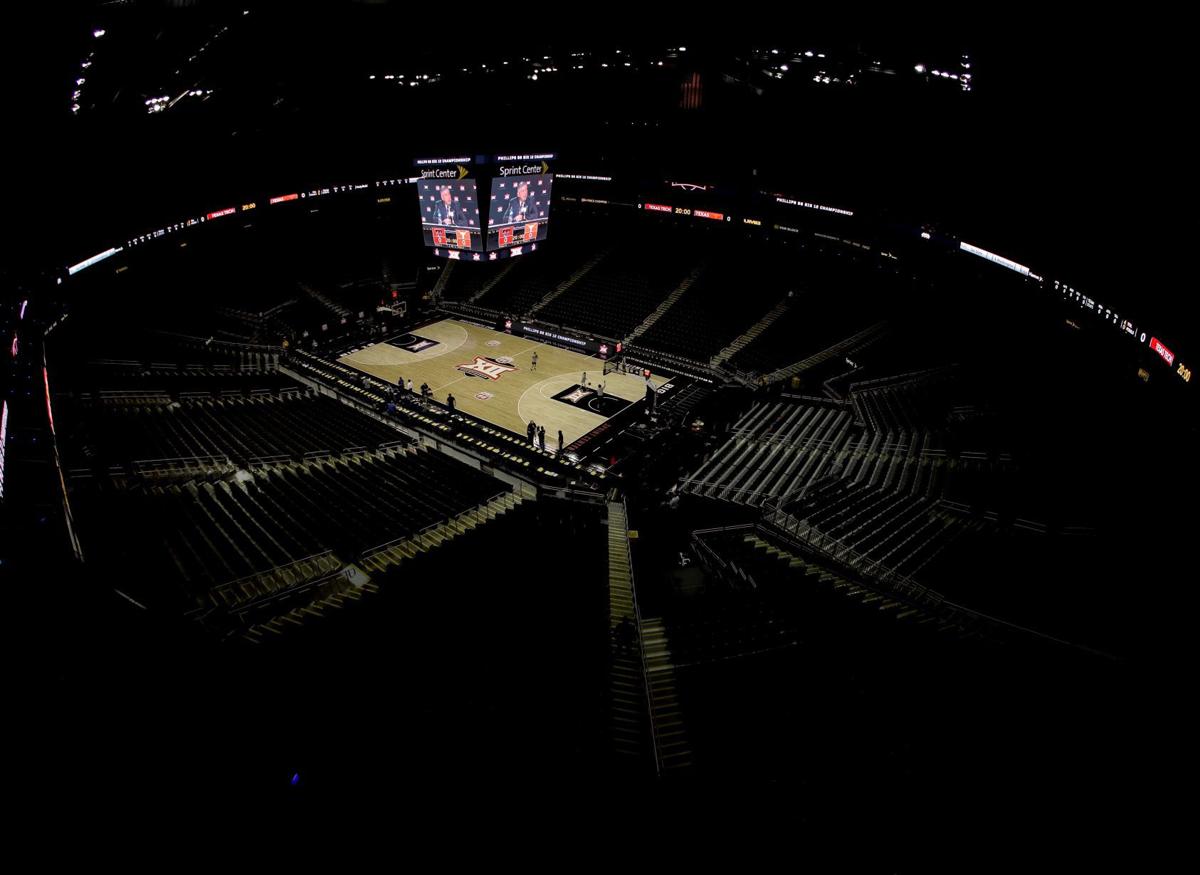 Big 12 Commissioner Bob Bowlsby is seen on the big screen in an empty Sprint Center in Kansas City, Mo., as he talks to the media after canceling the remaining Big 12 Tournament earlier this week. 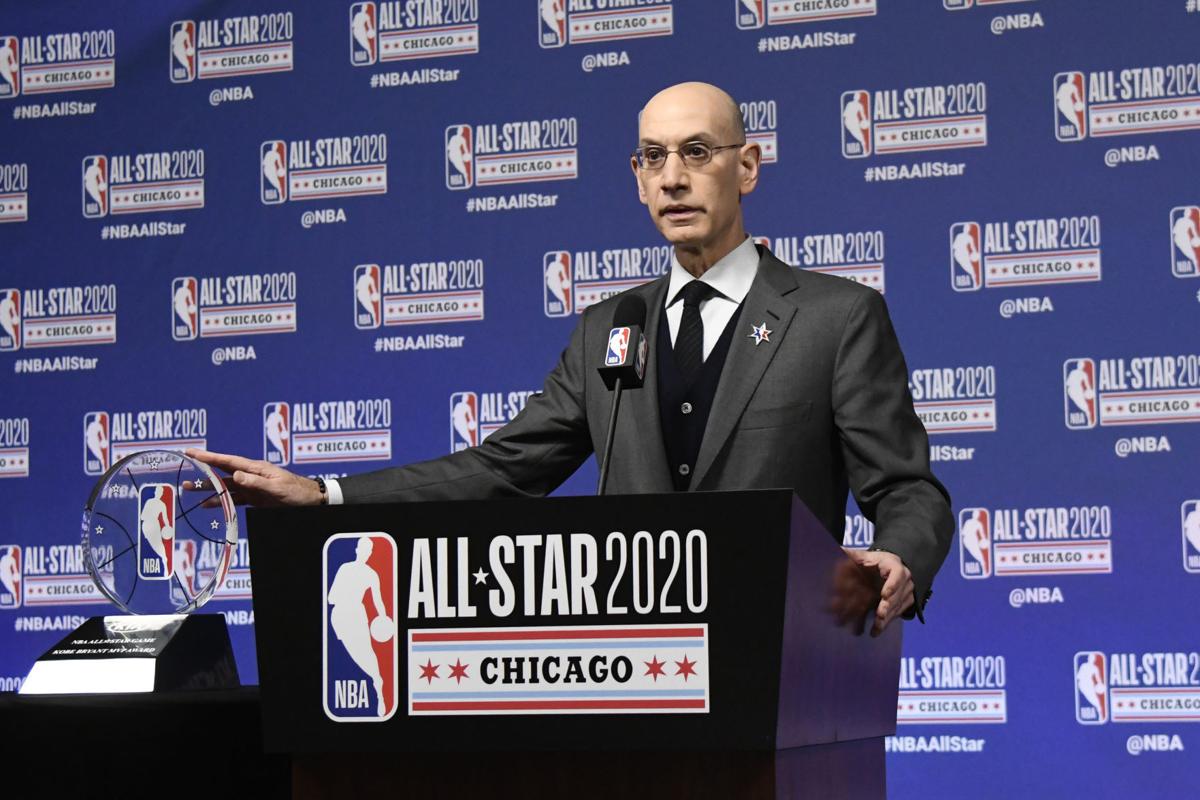 NBA Commissioner Adam Silver speaks during a news conference in February in Chicago.

The past week hasn't been weird at all in America. Nothing to see here.

We're just trying to make sense of a world health crisis. That's all.

Maybe it feels a bit like you've entered an unfamiliar building, a mammoth one, and it's pitch black inside. You proceed cautiously. You look for light. Any sliver of it. You hope it could lead to full-blown illumination. Maybe even warm sunshine. It has to happen at some point, right?

A day after canceling all remaining winter and spring sports events, the Big Ten has suspended all organized team activities.

Bottom line, it's the unknown that causes much of the discomfort.

Regarding the coronavirus, it's the unknown that's most unsettling. You figure at some point the world will return to relative normalcy. Warm sunshine will return. But when? There isn't a medical expert on the planet who could definitively answer that question. That alone elicits tension.

So, we keep trying to make sense of it all. We know this: The situation became very real in our nation Wednesday night, and Nebraska athletics was near the center of it all. My heavens, it was memorable. NBA Commissioner Adam Silver, in an interview Thursday on TNT, said he was driving home from the office at about 7 p.m. when he received word that Rudy Gobert of the Utah Jazz tested positive for COVID-19. So much for a relaxing evening for the commish.

Here's the thing about being a leader: Sometimes you have to lead — and I mean really lead — even as life gets incredibly uncomfortable around you. In this particular period of time, we need strong leadership in this world. That could help matters greatly. Silver showed why.

Flash back to Wednesday night. The Jazz were set to play the Oklahoma City Thunder in Oklahoma City. But then Gobert's test came back positive. Tipoff was delayed. Silver's initial decision was to postpone the game. Then he went a step further and suspended the NBA season indefinitely, a decision that snapped Americans (and others) to attention. This stuff is serious. Our lives were about to change. You could feel it.

As we contemplated Silver's decision, a surreal scene unfolded in Indianapolis, site of the Big Ten men's basketball tournament. As Nebraska played Indiana, a BTN announcer made casual reference to the fact Husker coach Fred Hoiberg wasn't feeling well. Then came a video on Twitter of Hoiberg with his head down, in obvious discomfort. It was an awful optic in the context of growing tension about the virus. All sorts of negative (and scary) thoughts raced through your mind. The unknown can do that.

Three doors down: New (and former) Husker assistant Dawson happy to be back in the neighborhood

Thank heavens Hoiberg, who was diagnosed with influenza A, appears to be OK. No, his team isn't quarantined. It appears it was just a scare. In fact, the Hoiberg story largely became lost in all the subsequent news, much of it occurring Thursday. March Madness, canceled. The NHL season, paused. The opening of the Major League Baseball season, delayed. One by one, dominoes fell. That was good for Nebraska athletics because the Hoiberg optic was … not good.

But we push forward, all the while trying to get a handle on what's happening and why it's happening. Silver helped in that regard.

The coronavirus has the effect of making us ponder familiar topics in new ways. Consider its impact on Nebraska football. The Big Ten announced Friday that all “organized team activities” — including workouts and practices — will be stopped until at least April 6 as a preventive measure. But, in theory, Husker players could gather for their own "unorganized" workouts, perhaps at the urging of coach Scott Frost.

On the other hand, it's possible Frost in this unique period of time would discourage such workouts. Although it would go against his competitive nature, he might discourage such a scenario because, well, it's simply not a great idea to gather 50-plus people in one spot. There's a basic health risk that's become alarmingly pronounced.

The potential eligibility relief could have a huge impact on the Nebraska baseball team, which has seven seniors on its roster.

No question, there's a bigger picture to consider here. In this case, that might involve Frost — whom I regard as a conscientious leader — thinking like Silver and helping contribute to the "flattening of the curve." It might involve thinking first of those who are most susceptible: the elderly and infirm.

So, the wide-ranging impact of the coronavirus already has Frost contemplating matters he never dreamed he'd have to address as a leader — i.e., the possibility of virtually no spring practice.

This could be a defining period for leaders all over the world, including the sports world. We need careful contemplation. We need alert and timely and forward-thinking decisions. Silver shines as an example. But we'll need others to guide us through the darkness, through the unknown.

Normalcy will return at some point. Until then, look out for each other, amigos.

Erik Chinander's spring plan for his defense makes sense. But Nebraska fans know better than to take for granted that improvement will occur.

Khalil Davis and Carlos Davis played for four different position coaches and three defensive coordinators at Nebraska. Who would sign up for that?

Life in the Red: Mohamed Barry's guide to the 2020 Husker ILB room

The former Husker captain sang the praises of a senior linebacker, and also offered insight on a pair of promising young talents.

The NU target was in a coach’s office when the NCAA banned all on- and off-campus recruiting activities. But e’s taking the disruption in stride.

Red-White Spring Game postponed from April 18; Moos says scrimmage 'most probably will not occur at all'

In addition to the scrimmage's fate, Moos also discussed the possibility of recouping lost spring practices and other athletic considerations.

A source told the Journal Star that Jervay Green is no longer with the team and has entered the transfer portal.

Burke joins Jervay Green as Huskers on their way out of Lincoln.

Husker wrestling great Jordan Burroughs deals with massive uncertainty created by the coronavirus as he toils in Lincoln in hopes of qualifying for the 2020 Tokyo Games, set to start July 24.

First time as an AP poll voter a learning experience

The Journal Star's Chris Basnett was one of 65 media members nationwide to vote in the weekly Associated Press Top 25 poll.

The Husker senior was in position to accomplish more in the small window of time that remained in her collegiate career. Then it was taken away.

Big 12 Commissioner Bob Bowlsby is seen on the big screen in an empty Sprint Center in Kansas City, Mo., as he talks to the media after canceling the remaining Big 12 Tournament earlier this week.

NBA Commissioner Adam Silver speaks during a news conference in February in Chicago.