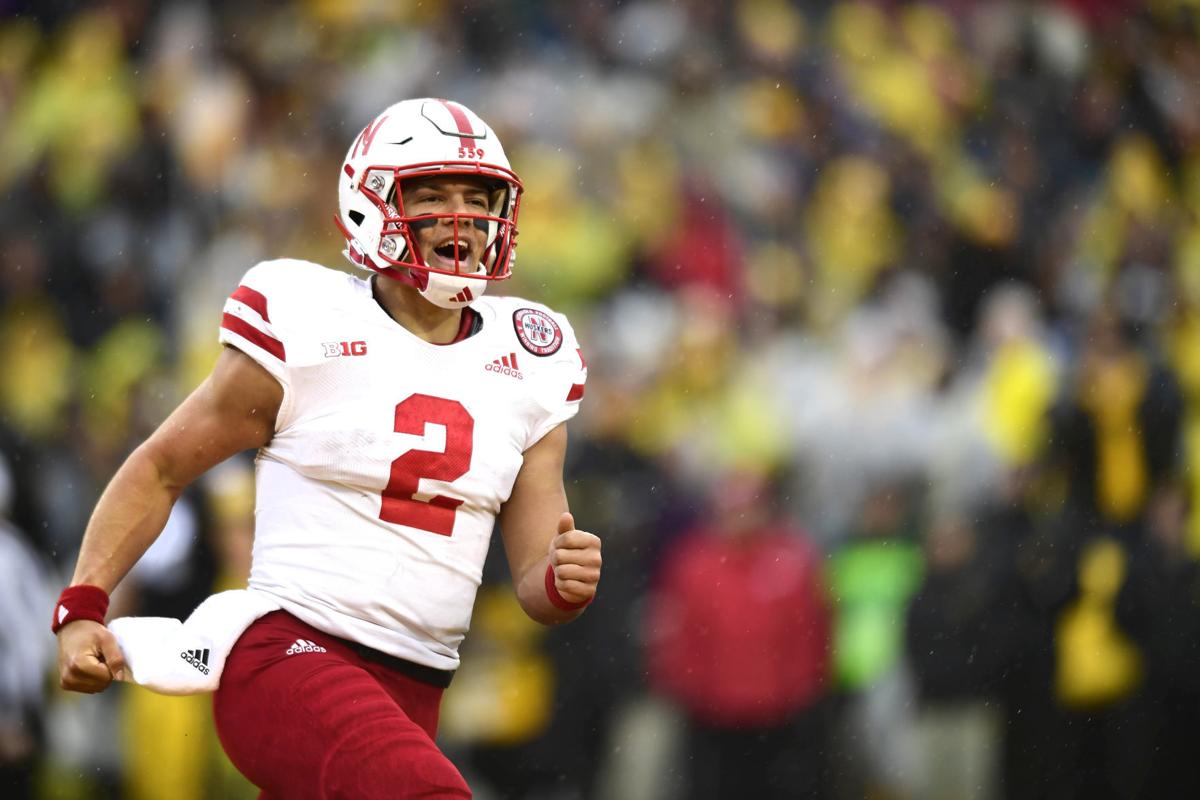 Nebraska quarterback Adrian Martinez celebrates against Iowa during the second half Nov. 23 in Iowa City.

Adrian Martinez has watched highlights of Scott Frost's playing days at Nebraska, and the images made an impression on the young gun.

"I haven't watched a lot of game film, though, just because, well, we don't run the wing-T," Martinez said with a chuckle.

Make no mistake, Martinez's respect for Frost is profound. In fact, Nebraska fans probably shouldn't take for granted the strong relationship that exists with Frost -- the second-year NU head coach and respected offensive mind -- and his prized young quarterback. Throw in Husker quarterbacks coach Mario Verduzco, whom both Martinez and Frost trust implicitly, and it's easy to imagine the QB's rise continuing in a big way.

It feels a bit like can't-miss material to me.

Martinez was asked last week during Big Ten Media Days why he thinks the three men's chemistry works so well.

"There's just a really good balance," he said. "Coach Frost is more of a laid-back guy. (As for) Verduzco, I wouldn't necessarily describe him as laid-back. But they're both super-knowledgeable about the game of football. They can come at you from different perspectives and offer a lot of input on any topic."

Frost prides himself on being a trivia whiz, and we're not talking about just sports. What's more, his experiences over the years with various giants of coaching are well-documented. With Verduzco, a conversation can branch off into any number of avenues. They're both upbeat, interesting dudes with extensive backgrounds. You get a strong sense Martinez appreciates all of it.

He said Frost's trust in Verduzco's teachings is unwavering.

"And it's the same with me," Martinez said. "As soon as I stepped on campus, no matter what he told me, no matter what he wanted me to do, that's what I was going to do. He's already made me a better player, so I'm excited for the next couple years with him."

The 6-foot-2, 220-pound Martinez, a native of Fresno, California, was brilliant in a lot of ways last season. His average of 295.1 yards of total offense per game was the ninth-best mark by a freshman in NCAA history. His completion rate of 64.6 ranked second in school history while his 629 rushing yards were the fourth-highest total of any true freshman in school history.

Ah, but he was far from perfect. He was a freshman. You knew there would be mistakes. To wit: Martinez had the second-most fumbles in the country with 12. Only Georgia Tech quarterback TaQuon Marshall had more.

So, Martinez has been mindful during the spring and summer of limiting turnovers. He threw 17 touchdown passes along with eight interceptions last season.

"I think I had too many turnovers -- too many fumbles -- and interceptions I could've avoided," he said. "Upon reflection, watching film, I'll be working on avoiding those mistakes."

Martinez said much of his film study occurs on his iPad in quiet moments after darkness falls.

"I really try to squeeze it in whenever I can," he said.

Bottom line, Frost has been in Martinez's shoes, something the young QB doesn't take for granted.

"That was part of why I wanted to come to Nebraska so much, because I would have a head coach who could relate to me and also knows exactly where we need to go and how to accomplish that in his years," Martinez said.

Verduzco also is an integral piece of the puzzle, obviously. Yes, a formidable trio.

* Martinez didn't want to go into depth about the conversations he's had with Frost that focus on the young quarterback already being a center of attention in the state -- a situation that obviously can present challenges.

"A lot of our talks I'd like to keep pretty confidential because he trusts me with that sort of information," Martinez said. "Any piece of advice that he gives, I'd like to take it to heart."

Trust is too valuable to take for granted. I respect Martinez's response.

* It was sort of strange. Up until last week in Chicago, Frost hadn't been asked much (that I know of) for his thoughts regarding Nebraska's football facilities even though the topic has generated buzz for months. Listening to his response, it was clear the program has challenges or outright deficiencies in some critical areas such as meeting rooms, locker rooms, training room and weight room.

Yeah, that's a lot of challenges.

Nebraska athletic director Bill Moos reiterated there's nothing imminent regarding the possibility of a new, standalone football facility. He's generally been cautious with his words on the topic. He has to be cautious because of the financial commitment necessary for such a project, not to mention the inherent politics.

Let's be clear: Nebraska needs a new football facility. Based on what I'm hearing, I think it'll get done. I think it has to get done.

* Illinois has no helmet laws for motorcyclists. That's just bizarre. I was in Chicago traffic; I'd consider body armor.

Judging by Scott Frost's appearance last week at Big Ten Media Days, he possesses ample confidence in both his 2019 Nebraska football squad and his long-term vision for the program. The team will be better than last year, he says flatly. How much better? Therein lies the intrigue.

Most Intriguing Huskers: No. 11, Kanawai Noa

The intrigue around Kanawai Noa only grew this past week at Big Ten Media Days in Chicago.The senior graduate transfer wide receiver, who spent his first four seasons at Cal, has by all accounts put together an impressive summer.

As Big Ten schools gear up for the beginning of preseason camp in the coming weeks, the West division is perceived as being wide open.

Most Intriguing Huskers: No. 12, JoJo Domann

Junior OLB JoJo Domann played in NU's final seven games last season, starting two and becoming one of its relied-upon playmakers. The biggest he made: A sack and forced fumble on Ohio State quarterback Dwayne Haskins. Can he give the Blackshirts a boost this year?

Mohamed Barry wants desperately to prove the prognosticators right. He hungers for the Huskers to win the Big Ten West Division and get a crack at the East champion in December in Indianapolis. But he isn’t about to make a lot of puffed-chest predictions.

Big Ten Media Days: Moos on NU football team: 'We really need to get to six wins' this season

After the Nebraska football team's four-win season in 2018, Husker athletic director Bill Moos said six wins would really help the program this year because it would lead to a bowl bid and the extra practices and recognition that come with it.

Big Ten Media Days: Bad weather had one Husker 'gripping the chair' on charter flight, but Huskers make it to Chicago in time

Nebraska had an adventurous route to Chicago due to weather, but made it more or less on time.

Most Intriguing Huskers: No. 14, Bryce Benhart

Freshman OT Bryce Benhart draws perhaps the most intrigue early on because he's seen by some as perhaps the closest to being ready to play right away.

CHICAGO — Pick a position on Nebraska’s football roster besides quarterback, and the questions follow easily.

CHICAGO — Maurice Washington will participate in preseason camp with his Nebraska teammates, just as he’s done over the course of the Huskers’…

Scott Frost lays out the reasons Nebraska will eventually need a new football facility, but also says of the Huskers' current set-up: "It works fine."

Driving for 6: A return to public weight room test results? Plus Barry wants to 'destroy folks'

Let's hop in the car and deliver some leftover deep dish from Big Ten Media Days in Chicago last week.

Nebraska freshman defensive back Myles Farmer was cited Monday night for possessing a small amount of marijuana, according to UNL Police.

Life in the Red: A big ratings bump for Husker verbal commit Gunnerson

Blaise Gunnerson hasn't played in a high school football game since his sophomore season, but the rising senior is still enjoying a summer ful…

Most Intriguing Huskers: No. 9, JD Spielman

The intrigue surrounding Nebraska junior wide receiver JD Spielman isn't exactly the same speculative type that follows many of the players so far — and to come — on this list.

Bring on Sparty? OK, maybe not quite yet. But what did you expect after Nebraska's third day of team workouts with a roster that's almost completely overhauled? Fred Hoiberg gets four games in Italy from Aug. 3-13 to size up his crew. Please pass the Barbera.

As Nebraska offensive line coach Greg Austin rolled through all the guys in his room in a radio interview on Tuesday evening, he added some ve…

Jahkeem Green has a couple of colleges in limbo on the eve of preseason football camp.

Nebraska quarterback Adrian Martinez celebrates against Iowa during the second half Nov. 23 in Iowa City.