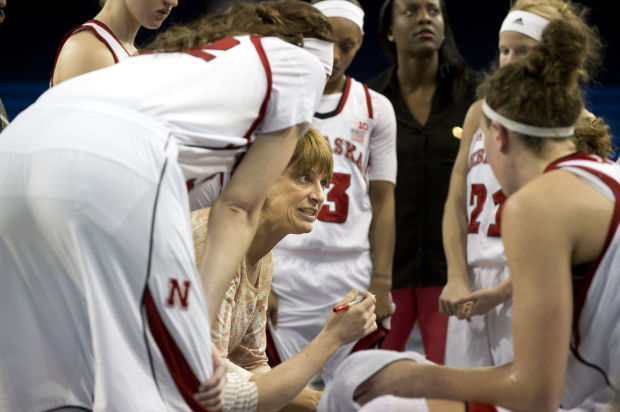 Nebraska women's basketball head coach Connie Yori (center) talks to the team during a timeout in the second half of an NCAA Tournament second-round game at Pauley Pavilion on Monday, March 24, 2014, in Los Angeles.

Nebraska women's basketball head coach Connie Yori (center) gives direction to the team during the end of the first half of an NCAA Tournament first-round game at Pauley Pavilion on Saturday, March 22, 2014, in Los Angeles.

She went that route in assessing what her team's chances would've been against undefeated Connecticut in the NCAA Tournament's Sweet 16 on Saturday at Pinnacle Bank Arena.

Bear in mind, the top-ranked Huskies have won by an average of 30-plus points this season.

"We would've probably lost," Yori told me this week.

You can't say that publicly, I told her half-jokingly.

She didn't back off.

"If we would've been able to keep it within 20 (points), it probably would've been a moral victory," she said. "I'm totally serious. I'm not taking anything away from our players, not at all, I'm just saying that's how good UConn is."

Assuming you don't live in a cave, you know Connecticut has played women's collegiate basketball at a very high level for a very long time. If you follow sports at all, you likely have heard of 60-year-old coach Geno Auriemma, the charismatic architect of the Huskies' startling success, which now includes 21 straight Sweet 16 appearances.

UConn is two victories from its seventh straight Final Four (and 15th overall), and four wins from Auriemma's record ninth national title. He cut down the net on the eighth last April in New Orleans.

Don't look now, but Auriemma might have a better starting five than he's ever had, said Jeff Walz, the former Nebraska assistant (1997-2001) who's in his seventh season as the very successful head coach at Louisville -- which currently is 32-4, seeded third and preparing to play No. 7 LSU in the Sweet 16 in Louisville, Ky.

Walz, by the way, also tends toward brutal honesty on all subjects, including UConn hoops. If the Huskies have had a better starting five, he said, perhaps it was the 2009 team that included Maya Moore, Renee Montgomery and Tina Charles.

As of noon Thursday, more than 8,600 tickets had been purchased for the regional. In the NCAA first and second rounds, the largest crowds were just more than 7,000 for home games at Tennessee and Texas A&M.

With Nebraska eliminated from the dance (by BYU), will large numbers of area fans forgo this weekend's games in Lincoln?

Yori enthusiastically hopes that's not the case. She regards the regional as a unique opportunity for Nebraska basketball fans -- men's and women's alike -- to see a magnificent UConn squad.

What's more, "We want events like this to return to PBA," Yori said. "In order for that to happen, our fans have to come out and showcase how great of fans we have. If nothing else, if somebody has purchased a ticket and decided they don't want to go, then give it to someone who does want to go.

"It's not just about helping our program. We want a men's regional here, too. Really, it's more important for fans to come out now than it would have been if we had been playing."

If a crowd of 9,000 materializes for a regional without a Nebraska team, well, the NCAA would no doubt take notice.

Let's face it, NU needs to make a statement of some sort. Something, anything. The Huskers haven't played host to an NCAA basketball event of any kind since 1993, when Angela Beck's squad rolled past San Diego in a first-round game at the Devaney Sports Center.

This particular UConn team should intrigue the average sports fan.

"I mean, I watched (6-foot-4 sophomore) Breanna Stewart drive the baseline against Rutgers, take one dribble, go up, get fouled and slap the backboard with her hand as she laid the ball in," Walz said.

During their five postseason games — the American Athletic Conference and NCAA tournaments —  the Huskies have not trailed for a single second and have won by a total of 158 points.

"Like I said, I don't want to take anything away from our players," Yori said. "But that's just how good of a team that people here have a chance to watch on Saturday and Monday."

With apologies to BYU, notice that Yori said Saturday and Monday.

Two opportunities for Nebraska fans to significantly bolster the school's chances to land similar events in years to come.

Steven M. Sipple: Auriemma proves a master at his calling

When you think of the all-time greatest college coaches in any sport, UConn women's basketball coach Geno Auriemma should spring to mind, Steven M. Sipple writes.

It's somewhat bewildering to ponder, but the Nebraska men's basketball team will operate next season with the weight of legitimately high expectations, Steven M. Sipple writes.

Nebraska women's basketball head coach Connie Yori (center) talks to the team during a timeout in the second half of an NCAA Tournament second-round game at Pauley Pavilion on Monday, March 24, 2014, in Los Angeles.

Nebraska women's basketball head coach Connie Yori (center) gives direction to the team during the end of the first half of an NCAA Tournament first-round game at Pauley Pavilion on Saturday, March 22, 2014, in Los Angeles.