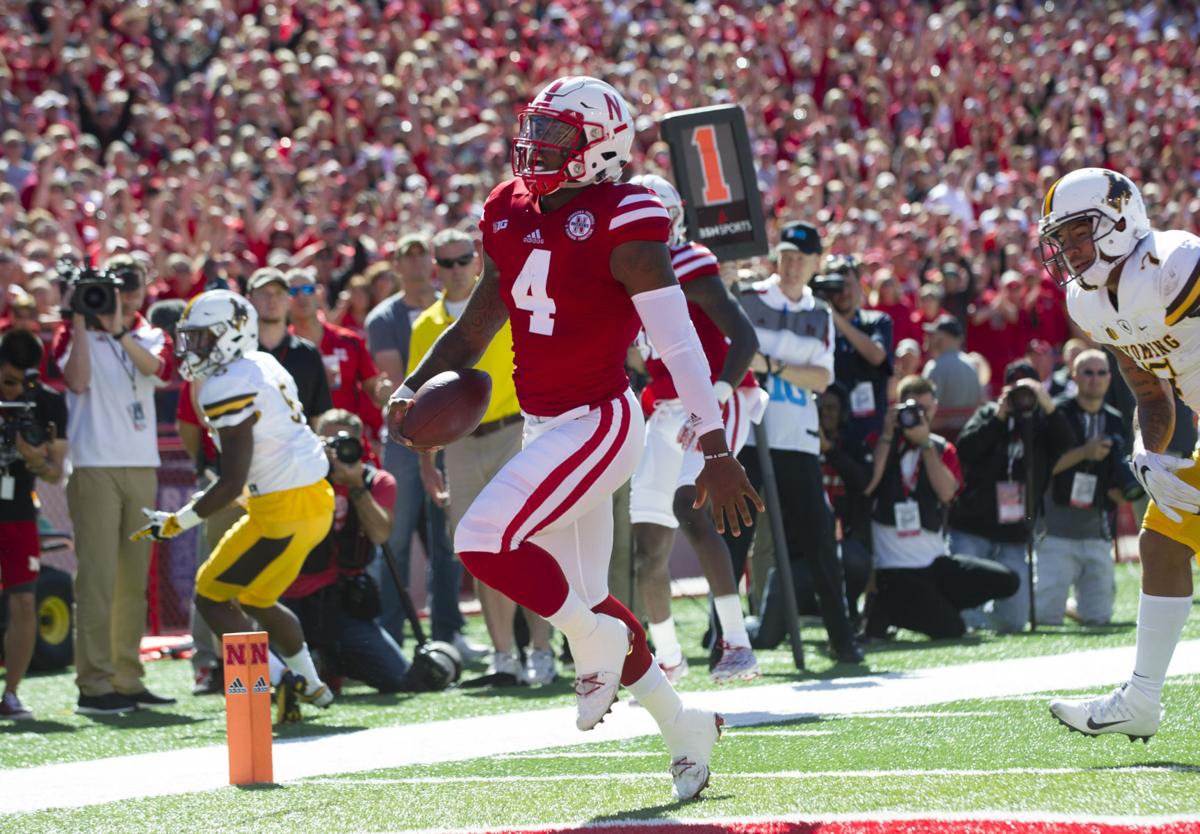 Nebraska quarterback Tommy Armstrong has plenty of time to find his receiver in the first quarter Saturday against Wyoming at Memorial Stadium.

You get the distinct feeling the Nebraska offensive coordinator doesn't suffer foolish decisions by his veteran quarterback particularly well.

You get that feeling because Langsdorf, when asked Saturday to assess Tommy Armstrong's overall performance, initially skipped right past the part about the senior completing 20 of 34 passes for 377 yards and three touchdowns, with another TD negated by an illegal block.

Langsdorf initially skipped the part about Armstrong recognizing a mismatch and lofting a 34-yard touchdown pass to Jordan Westerkamp that helped put Nebraska in control early in the fourth quarter.

Langsdorf initially skipped the part about Armstrong's improved touch and decision-making in the screen game, which was an effective antidote for Wyoming's frequent inside blitzes.

Langsdorf completely skipped the part about Armstrong setting a school record for career touchdown passes with 57, topping Taylor Martinez by one, as Nebraska improved to 2-0 by burying Wyoming with 28 fourth-quarter points in a 52-17 victory at Memorial Stadium.

There were plenty of positives for the home team, but enough issues — including a bunch of knucklehead penalties — to make even the most optimistic Nebraska fan feel a bit fidgety with 24th-ranked Oregon up next.

Langsdorf was his usual calm-and-collected self as he addressed reporters. Asked to assess Armstrong, Langsdorf said he was "pretty good overall."

The veteran coach proceeded to shift quickly to Armstrong's early second-quarter interception on first-and-goal from the 5-yard line. Armstrong said he spotted a receiver in the back of the end zone. But there were defenders (plural) in the way. Armstrong gunned it anyway, as he's wont to do, and safety Andrew Wingard made the pick.

"It was one of those deals where we forced it for no reason," Langsdorf said. "We should throw it out of bounds or into the stands and line up and play again. In a really good game, that's kind of one thing we have to fix."

Many Nebraska fans immediately fixated on that throw, in part because that's the world in which we live. It's instant analysis. You hear (and read): "Same ol' Tommy."

It didn't help matters that on Nebraska's next possession, on third-and-4 at the Cowboy 12, strong safety Marcus Epps basically dropped what would've been a pick six to tie the game 7-7.

Even so, the "same ol' Tommy" refrain is largely unfair, if only because Nebraska is merely two games into his second go-round in the Mike Riley-Langsdorf pro-style offense. What's more, the refrain seems a bit premature, because his stat line through two games is decent: 25-for-44 (56.8 percent) for 485 yards and four touchdowns, with one interception.

Yes, competition has been lackluster. That will change this week. But by how much? After all, Oregon allowed 37.5 points last season to rank 115th nationally. The Ducks' pass defense was abysmal (125th).

Brady Hoke, the first-year Oregon defensive coordinator, knows Armstrong can be a handful. We all know that. With Armstrong, you sometimes take the very good with the very bad.  If you're a patient sort, you still hold out hope that he's maturing as a decision-maker, even if there was strong evidence to the contrary Saturday.

Langsdorf can protect Armstrong only so much with play calls.

Bottom line, Armstrong's margin for error will be slimmer against Oregon because the speedy Ducks' offense can be lethal.

In other words, Tommy being "pretty good" may not cut it.

Thing is, he knows better than to make that second-quarter pass into traffic.

"I should've just thrown the ball away," he said.

He always faces the media like a man. He doesn't bat an eye when you bring up his bad plays, even after he makes a slew of good ones.

By early in the second quarter Saturday, he had completions to eight different receivers.

"I thought he made plays," Langsdorf said. "I thought he ran the ball well. I thought he distributed the ball under pressure at times really well — got rid of it quicker. There were a couple reads we'd like to have back. ... We tried to get a little aggressive on a couple.

"Besides the interception, I was really pleased with how he spread the ball around and got out of pressure problems by either scrambling or getting rid of the ball."

"They had a lot of different cross dogs and linebacker pressures that made it tough to get up to the second level," Langsdorf said.

Hey, mom, if you're reading this, "cross dogs" is a term for a certain style of blitz.

Even my mom knows Armstrong made a poor decision on the second-quarter throw.

Of course, my mom taught me to see good in everyone. That's pretty easy when it comes to Armstrong's game.

Nebraska quarterback Tommy Armstrong address the media at a news conference following the Wyoming vs. Nebraska game on September 10, 2016.

Watch: Riley 'We had a hard time finding ... an identity run'

Nebraska head coach Mike Riley addresses the media at a press conference following the Wyoming vs. Nebraska game on September 10, 2016.

Nebraska wide receiver Jordan Westerkamp talks about how the receiving corps performed in a postgame news conference following the Wyoming vs.…

Huskers eager to challenge Ducks after pulling away from Wyoming

Mike Riley did not say precisely when it was, but there was a point in the fourth quarter Saturday, his team having specialized in thievery to…

Photos: Best moments from the Huskers' victory over Wyoming

Fall was in the air on an early September Saturday morning as the Huskers hosted the Cowboys at Memorial Stadium. Photos by the Journal Star

Steven M. Sipple: Oregon will bring speed and flair, but not much defense

He took them on a tour of the great football cathedral last Friday. It was quiet and empty then.

Nebraska quarterback Tommy Armstrong has plenty of time to find his receiver in the first quarter Saturday against Wyoming at Memorial Stadium.