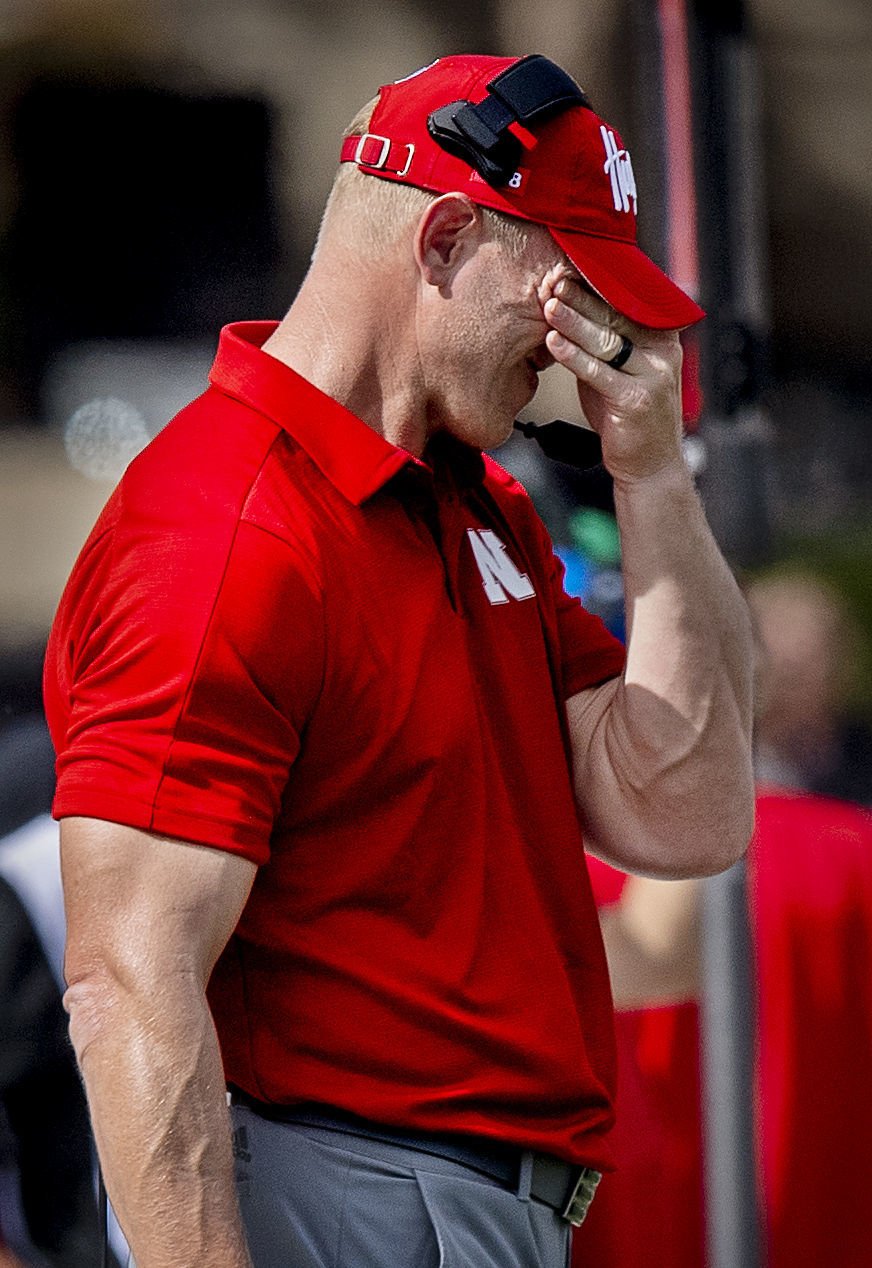 Nebraska coach Scott Frost rubs his eyes during a break in the action against Colorado in the third quarter last week at Folsom Field in Boulder, Colo. 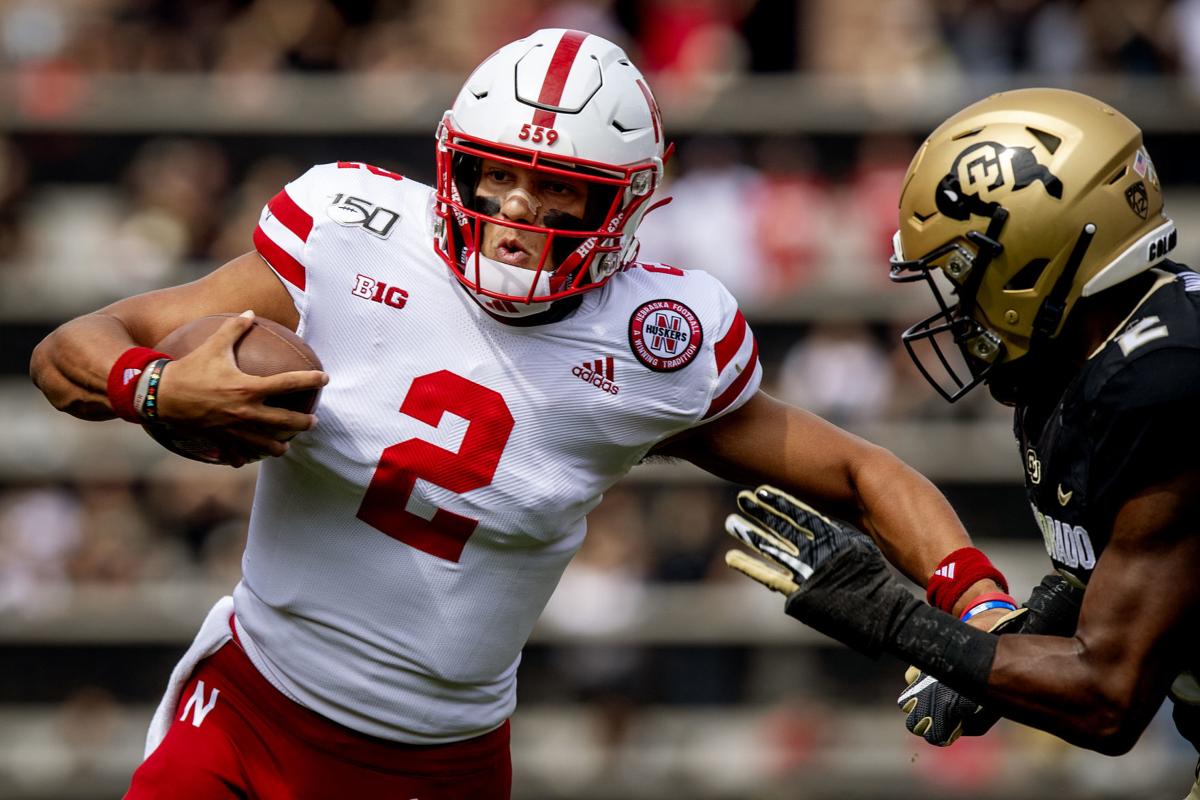 Nebraska quarterback Adrian Martinez (2) attempts to avoid the tackle of Colorado's Mikial Onu in the second quarter on Saturday at Folsom Field in Boulder, Colo.

You can never really accuse Nebraska football fans of being overly apathetic, although the 2017 season took many of us dangerously close to that realm.

Husker fan passion is an enduring and endearing trait. In some ways, even fan impatience can be considered OK because it indicates a high degree of caring.

But when impatience evolves into cynicism, it feels cold.

In the wake of Nebraska's 34-31 overtime loss to Colorado last week, a mix of impatience and cynicism sparked up in the Husker fan base. In a sense, it's to be expected considering the shaky nature of NU's first two games. For crying out loud (and some fans did), the Huskers squandered a 17-point halftime lead against the Buffaloes in front of some 30,000 red-clad fans at Folsom Field hungry to celebrate a triumph over a traditional rival.

My heavens, the NU-CU rivalry still feels hot. A victory could've propelled the Husker program forward at least a few steps. Heaven knows the program, a train wreck before Scott Frost arrived on campus following the 2017 season, could use a jolt.

For many Nebraska fans, the loss felt like Ralphie ran right over them, and they were angry about it.

To be sure, Frost was outcoached by Mel Tucker in the second half. Colorado's defensive adjustments were effective, and Frost's play-calling in OT was surprisingly conservative. What's more, Nebraska players on both sides of the ball made glaring mistakes reminiscent of, well, pick a head-coaching tenure at NU since Tom Osborne retired.

In an increasingly angry nation, virtually nobody's immune from social-media vitriol — apparently not even Frost in his home state. Message-board discourse about the coach got ugly. Plus, note how Nebraska fans reacted this week to Matt Farniok's innocuous comments about how well the team practiced Monday.

"Blah blah blah. Show it on Saturdays," one fan tweeted.

Tweeted another: "Nice. Sprinkles for everyone."

I'm guessing a part of Frost understands Nebraska fan frustration and cynicism because he felt the same way during the Mike Riley era. In the early stages of Frost's tenure at NU, he made several pointed references to how far the program slid backward. Frost's comments were fair and accurate. He spoke from the heart. Bottom line, Husker fans should keep the god-awful Riley era in mind as Frost tries to build the program the way he sees fit.

Fans also should keep in mind how badly Frost wants to get it right — all of it — starting with a strong foundation. He received a seven-year contract for a reason. He may need a long runway before he gets the program exactly where he wants it. But I get the distinct feeling many fans don't want to hear that sentiment.

To wit: A lot of attention was directed this week toward Frost's 1-6 record at Nebraska in games decided by six points or fewer. Yes, he's ultimately responsible for losses. He surely made in-game decisions he'd like to have back. But you also must acknowledge that the Huskers in the past three years have had only two players selected in the NFL Draft: Nate Gerry in 2017 (fifth round) and Tanner Lee in 2018 (sixth).

You know one excellent way to close out games? Recruit players who make critical plays in clutch moments. Rex Burkhead and Ameer Abdullah come to mind. They found the first-down sticks time and again in the clutch. You probably remember the great place-kicker Alex Henery, a fourth-round selection. On defense, think Lavonte David, Jared Crick and Prince Amukamara, to name a few. Oh, yeah, that Suh guy wasn't too shabby, either.

Frost already has changed the roster dramatically. Meanwhile, we saw improvement in the program's culture last season as Nebraska dug in hard following an 0-6 start. But Frost and his staff have work to do in that area based on comments coming out of NU's camp this week.

Tight end Austin Allen told reporters that he didn't see enough energy on the sideline before kickoffs in last week's game. He saw more of that sort of energy last season, he said. Although it's just one young man's opinion, it gives you pause.

Nebraska defensive coordinator Erik Chinander spoke in plain terms about his unit's inability to finish the job at CU. Learning to finish is often part of a program's growth process, he said. He's right. Learning how to turn the knife is an art. Even so, it was disappointing to hear him say that some Husker defenders lacked a sense of urgency against the Buffaloes. Seriously?

Colorado fans' taunts and gestures toward stunned Nebraska fans at game's end reminded Husker fans that growing pains can be miserable. Granted, national and local media (myself included) put lofty expectations on Frost's program for this season. Perhaps NU will turn out to be a top-25 team after all. But do fans really demand a top-25 program this early in Frost's tenure, especially with depth being an issue at certain positions?

Let's say one of his offensive linemen falters badly. Frost has few options. But you have to believe he'll solve the roster issues soon enough.

Until then, he may have to tune out the cynics. He's thick-skinned and can handle the heat.

But they can be a wicked bunch.

If Frost wants to run the ball more, Austin welcomes the opportunity for his offensive linemen

What Nebraska fans can look for from the opponents in Saturday's Husker game against Northern Illinois.

The latest Nebraska football news and notes from Husker Extra.

Husker DC Chinander: Learning how to finish 'part of growing up as a football program'

What if Claude Monet, just before he put the finishing brush strokes on some water lilies, accidentally dropped an elbow on the canvas and lef…

Isaac Armstrong is listed atop Nebraska's depth chart at both punter and place-kicker this week in advance of Saturday night's home game against Northern Illinois. However, Husker regular place-kicker Barret Pickering, battling a leg/hip injury, has been practicing with "a light kick count" since last week, special teams coordinator Jovan Dewitt said Tuesday.

With another year in Nebraska's system and another year of eligibility, junior inside linebacker Will Honas is ready to put the past behind him.

Reimer impresses, then produces for Huskers in walk-on role

Through an impressive fall camp that had Nebraska coaches raving about his effort, Reimer moved past more heralded recruits and into a position for immediate playing time.

My area code: Football, lacrosse and chicken riggies with Casey Rogers in the 315

Casey Rogers is a redshirt freshman from Syracuse, New York.

Game On: A closer look at how the Huskers and Huskies line up

Time to level up. Parker Gabriel breaks down Saturday's matchup between Nebraska and Northern Illinois.

Much has changed since NIU shocked the Huskers in 2017, but one constant: Turnovers will be critical

Northern Illinois comes to Lincoln again with an aggressive defense and again with a group that isn’t going to shy away from playing in front of a big crowd.

Of course, Nebraska football fans would welcome improvement from the Huskers on Saturday in the wake of the team's shaky start to the 2019 season.

The start of the Nebraska football team's matchup against Northern Illinois will be televised on Fox Business Channel.

Nebraska coach Scott Frost rubs his eyes during a break in the action against Colorado in the third quarter last week at Folsom Field in Boulder, Colo.

Nebraska quarterback Adrian Martinez (2) attempts to avoid the tackle of Colorado's Mikial Onu in the second quarter on Saturday at Folsom Field in Boulder, Colo.