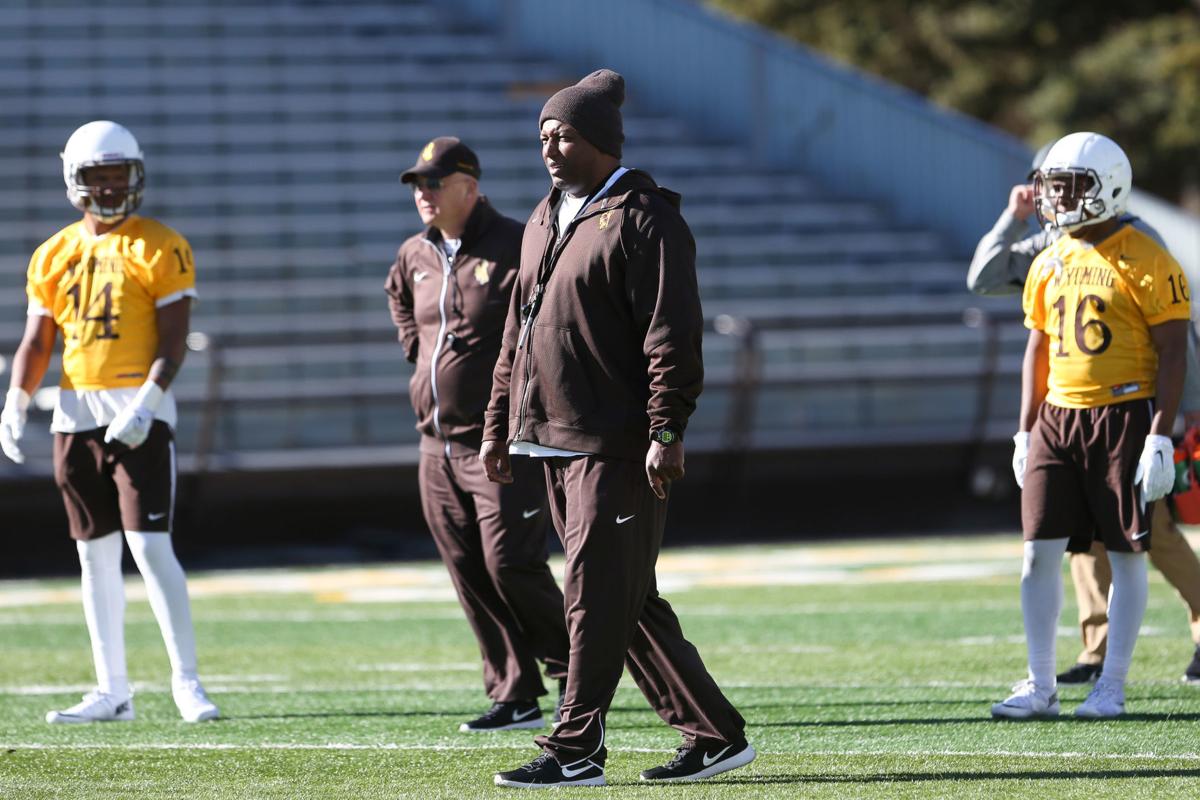 Mike Grant (center) started two seasons for the Huskers. He threw for 86 yards in a 13-0 win against Baylor to open the 1990 season. Grant started the first five games in 1992 before Tommie Frazier took over as the starter.

Grant says it feels "reviving" to start fresh after being part of the North Texas staff that was let go after last season. He embraces the thought of stepping outside his comfort zone and growing in his profession.

In a sense, though, there is comfort nearby — not to mention recruits.

"It's interesting," Grant said last week. "I'll talk to Reggie Cooper or some other ex-Huskers and they'll all say, 'Man, you're way out in Wyoming.' I have to remind them it's only a state over from Nebraska."

Grant in coming months will emphasize that message to Nebraska high school players, particularly ones in Omaha. He plans to recruit the city hard, as he did for Iowa State. He rattles off Omaha-area players who helped the Cyclones prosper during his tenure: JaMaine Billups, Jon Davis, Stevie Hicks and brothers Nick and Matt Leaders, to name a few.

During his playing days at Nebraska (1989-92), Grant was a roommate of wingback Abdul Muhammad, who now lives in Omaha and is plugged deep into the prep scene.

"All of my connections and ties, they can only benefit us," said Grant, who obviously looks forward to Sept. 10, when Wyoming plays at Nebraska.

Grant clearly feels it's important for Wyoming, where Bohl is 6-18 in two seasons, to continue to recruit the state of Nebraska.

"Dan McCarney had never been into Omaha all that much before I got there," Grant said of the former Iowa State and North Texas head coach. "I convinced Dan that because of Husker football, the sport is very important to the youth in the state. The kids grow up loving football. They grow up playing it.

"It's not that they don't play soccer and baseball and other sports, but football is truly important to that state."

It's not feasible for Nebraska to offer scholarships to all of the state's top prospects, and a few might even get overlooked. Grant is watching all the while, as is Frank Solich at Ohio and Scott Frost at Central Florida and Turner Gill at Liberty and Lance Leipold at Buffalo, and so on.

The Dakota schools are making scholarship offers earlier than ever to Nebraska kids.

Even so, Wyoming can benefit the way Iowa State did, Grant believes.

"I always knew Nebraska kids are hungry, and (cold) weather isn't going to be a shock to their system," he said. "You could fly to California and Florida to grab guys that aren't as familiar (with this region), but in recruiting the 500-mile radius, you're going to get the same type of player who is also a blue-collar, tough kid who can play winning football."

Grant thinks he has that type of player in Johnson, who retains state Class A records in career receiving yards (3,548), receptions (195) and touchdowns (44). He comes off "a tremendous spring, a tremendous turnaround" from his first year on campus, Grant said.

Meanwhile, two of the Nebraska scholarship receivers in the class of 2014 — Jariah Tolbert and Glenn Irons, both of New Orleans — no longer are in the program because of disciplinary reasons.

To be fair, Johnson attracted no offers from Power 5 schools.

"I believe that some of those Nebraska kids we had at Iowa State had a chip on their shoulder," Grant said. "Some of those guys felt Nebraska didn't feel they were good enough, so they wore that chip."

Does Johnson feel that way?

"I don't know," Grant said with a chuckle. "I know how the dad feels ... I just know C.J. is excited to come back home and play. I'll have to get around him on game day and see if that mentality is going to come out."

So, Grant's journey continues in a Wyoming program that has enjoyed only one winning season in the past six and finished 2-10 in 2015. Bohl, though, guided North Dakota State to three FCS crowns and is instilling core principles he used there — principles he learned from Tom Osborne at Nebraska. For instance, player development and top-notch facilities are emphasized. A physical, ground-oriented offense also is a hallmark.

"If a player knows that a coach truly cares about him, he'll do anything for that coach," Grant said. "As a player, you're spending more time with your coaches than you are with your parents. A lot of times I don't think a coach realizes part of his job is the development of these young men as people.

"Had I not had that experience with Osborne — if I had been with someone who didn't care about young men as much as he did — I'd be a totally different coach."

And his journey likely wouldn't have meant nearly as much to him.

Husker fans know well by now that Wyoming, even in years when significantly outmanned by Nebraska, usually shows up to Lincoln ready to go 12 rounds.

Nine ex-Husker quarterbacks currently are coaching in the college game.

If you missed it, go back and watch it. Absorb it.

Former Huskers back in Lincoln for alumni camping experience

They came out one-by-one for what was a reunion of sorts, jogging through a line of kids with hands extended for high-fives.

Steven M. Sipple: Armstrong's summer focus should be music to ears of RBs

Steve Stanard provides a clear window into the Wyoming football program — a program that will visit Memorial Stadium on Sept. 10.

Mike Grant (center) started two seasons for the Huskers. He threw for 86 yards in a 13-0 win against Baylor to open the 1990 season. Grant started the first five games in 1992 before Tommie Frazier took over as the starter.