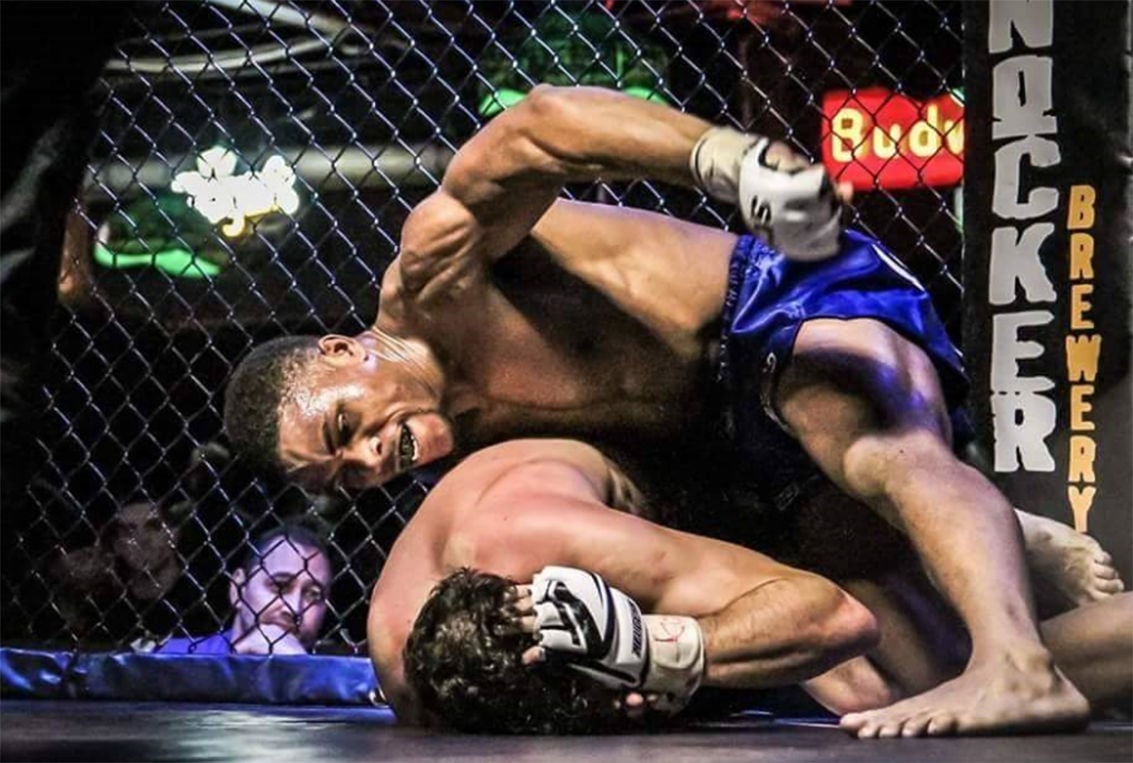 Austin Jones (top), a former Husker football player, is 2-3 as a mixed martial arts pro after going 6-1 as an amateur. 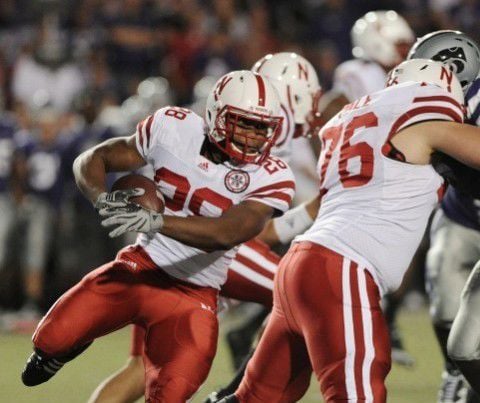 Nebraska's Austin Jones (28) gets a block from teammate Brent Qvale (76) during a game at Kansas State in 2010. 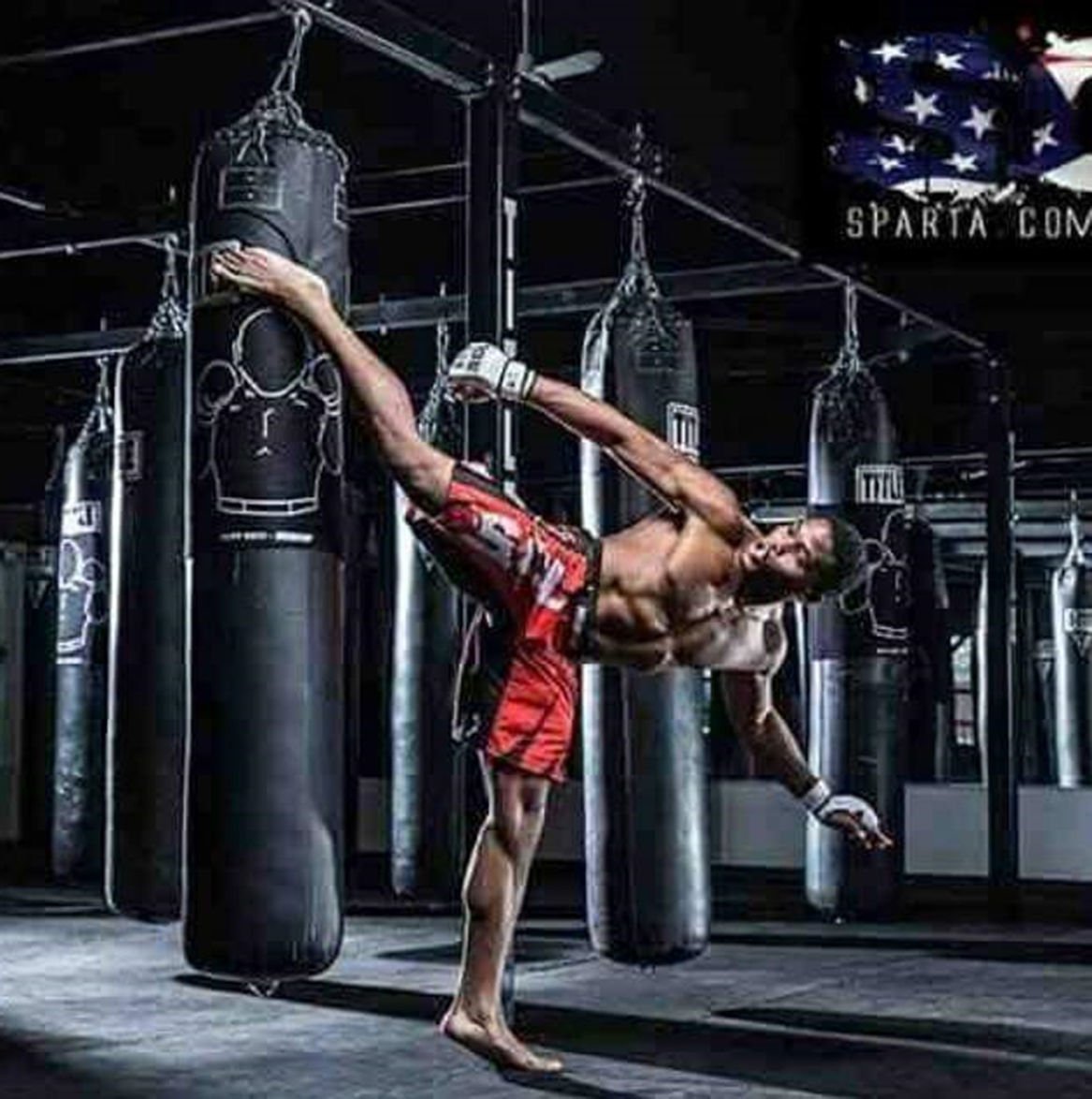 He hungers to become a UFC champion, and evidence suggests it would be foolish to casually dismiss the pursuit of his dream.

Along the way, he hopes to inspire people to think big, to make goals and work diligently toward them — to always keep punching, if you will — even if odds are stacked against whatever you seek to accomplish.

Bear in mind, Austin Jones beat the odds as a Nebraska running back. He caught Husker coaches' attention in 2007 during a walk-on tryout open to full-time students. That he even was offered a position on the team was an upset in itself — about 35 tried out, and only he received a call.

But he wasn't satisfied. He played two seasons on the scout team, saw spot duty in games as a sophomore and junior, and in August 2011, before his senior season, was awarded a scholarship. He finished his career with 26 carries for 114 yards and a touchdown while also assisting on special teams. He earned a bachelor's in communication studies.

So, think twice before you bet against Jones rising in the rugged world of mixed martial arts, even though he lost his last two fights to fall to 2-2 as a professional after going 6-1 as an amateur. He retains optimism. You hear it in his voice. He's still the determined athlete who former Nebraska assistant coach Ron Brown once said was "as good a finisher as we have on the team."

The 5-foot-10, 170-pound Jones, who lives in Aurora, Colorado, and trains in nearby Denver, is now interested in a different sort of finishing. He feels he's strong enough to finish off opponents. His footwork and balance are above-average thanks in part to his football days. The key is developing and honing MMA technique through rigorous training and believing he can succeed.

"If you want to get that knockout punch, you have to just go for it," he said.

He thinks back to his days at Nebraska, and earning his scholarship.

"It was just go forward, and don't think about failing," he said. "I remember how hard I worked to get to that point at Nebraska. I had a crazy work ethic because I believed I could be just as good as the guys on scholarship. And now I just kind of keep all of that in my mind. If I could do it then, I can do it now. It's all a mindset."

Jones ventured into MMA because he wanted to continue to compete in athletics. MMA made sense. He was a state qualifier in wrestling as a senior at Smoky Hill High School in Aurora, Colorado, and showed his strength and mobility during his time in the Nebraska football program.

After leaving Lincoln, he came across a gym in Denver, trained for a year and in August 2013 won his first amateur bout by unanimous decision.

The team concept is largely absent in his new sport. Granted, he prepares with the help of a fight team. "But you're the bull who needs to step into that cage alone," he said. "I was nervous. It's a different type of feel. You hear the crowd just outside your locker room. The adrenaline starts pumping. But you practice breathing, and your coach is there to calm you down."

Jones is ranked 27th out of 47 Colorado pro welterweights, according to Tapology. Yes, he faces a steep climb to the big leagues. Competition is rugged as the UFC continues to grow in popularity. To wit: Brothers Frank and Lorenzo Fertitta, who own 80 percent of UFC, bought into the business in 2001 for $2 million. The brothers are each now reported to be worth about $1.6 billion, according to Forbes.

"I think it would be really cool to get into the UFC and show up to a Husker game and get my name announced to the crowd before the fourth quarter," he said.

"It's about trusting the process," he said. "Things are never just going to happen right away the way you think they should. But if you take it day by day, one day those opportunities are going to show up.

"The fact you're willing to show up and work hard, that's why opportunities come."

That's a sound message for anyone, regardless of endeavor.

James Jones, the veteran NFL wide receiver, has no formal ties to the Nebraska football program, but he may quickly become popular with Husker fans.

Nebraska football coach Mike Riley talks often about the issue, and to his credit meets it head on.

Say this for Darin Erstad: He makes for interesting ballpark conversation.

Shush. The kids are resting.

Maurice Purify knows what can always make him smile.

Austin Jones has always envisioned fighting in Lincoln, listening to his fans behind him cheering his name.

Austin Jones (top), a former Husker football player, is 2-3 as a mixed martial arts pro after going 6-1 as an amateur.

Nebraska's Austin Jones (28) gets a block from teammate Brent Qvale (76) during a game at Kansas State in 2010.