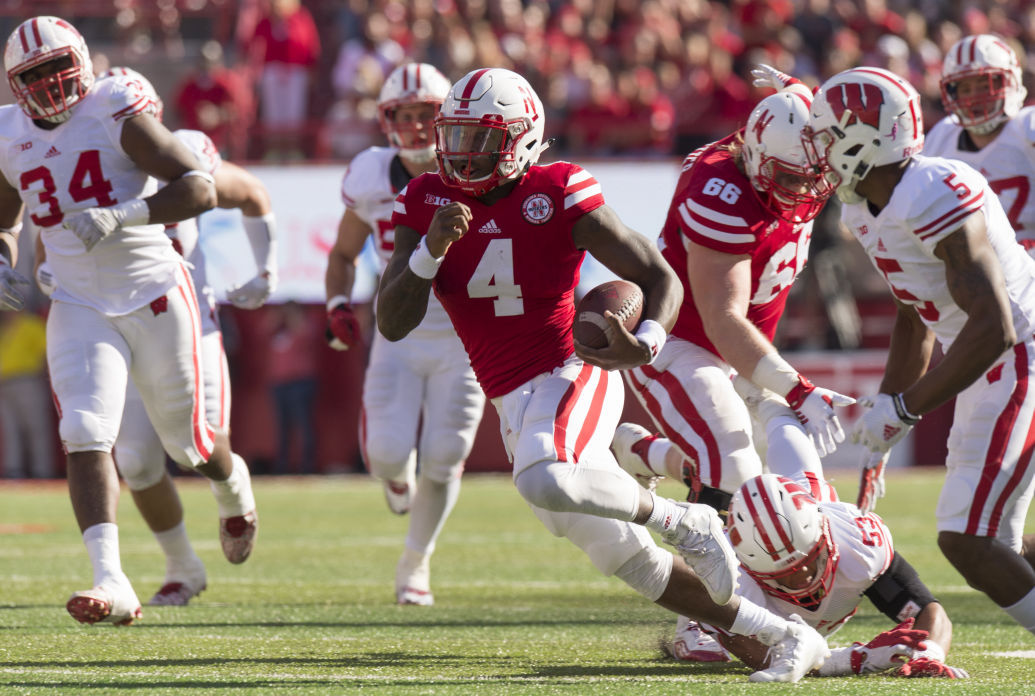 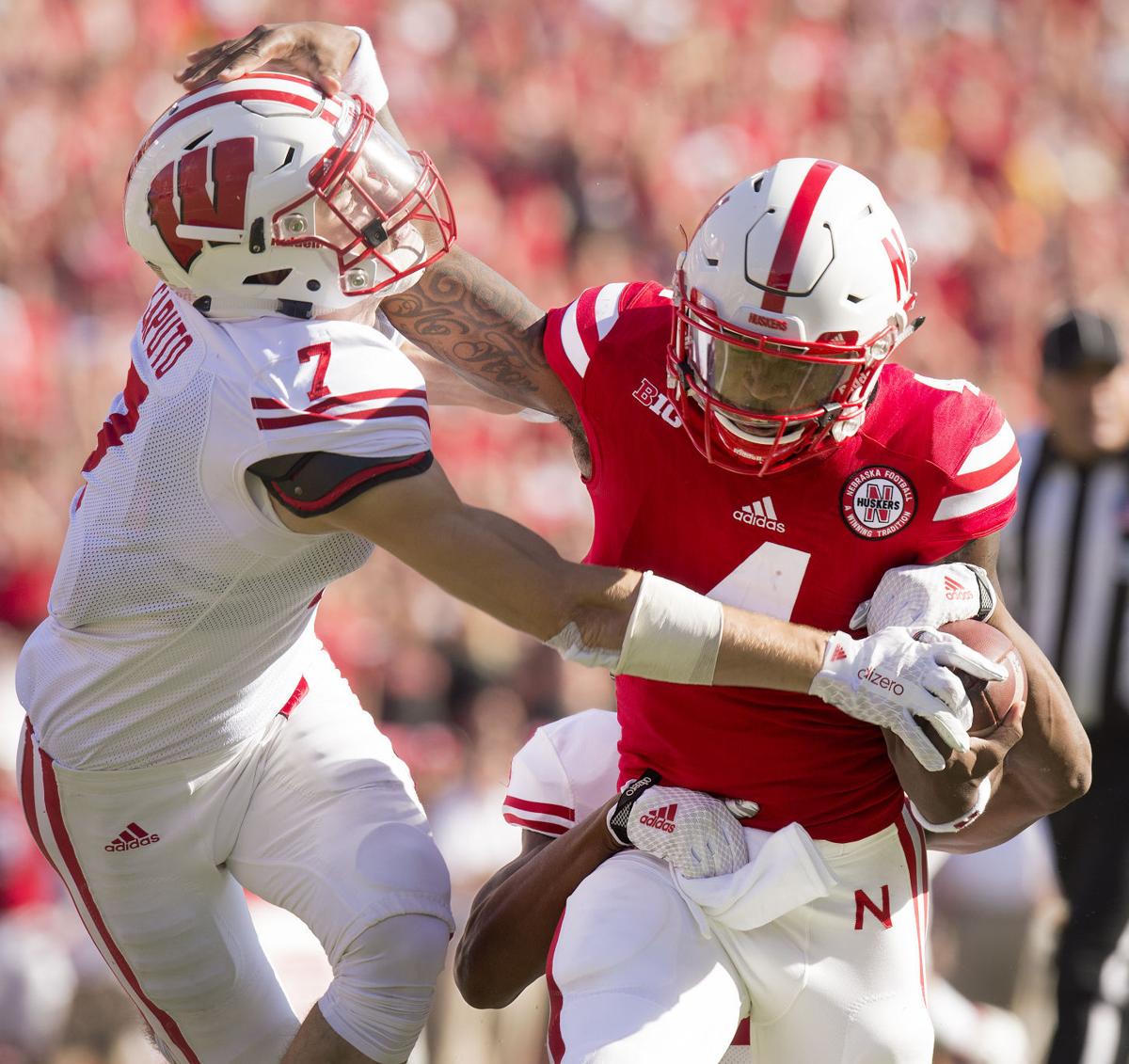 Nebraska quarterback Tommy Armstrong Jr. (4) battles with Wisconsin's Michael Caputo (7) and Darius Hillary (behind Armstrong) on a first down run that was brought back due to a Huskers penalty in the first half on Saturday, Oct. 10, 2015, at Memorial Stadium. 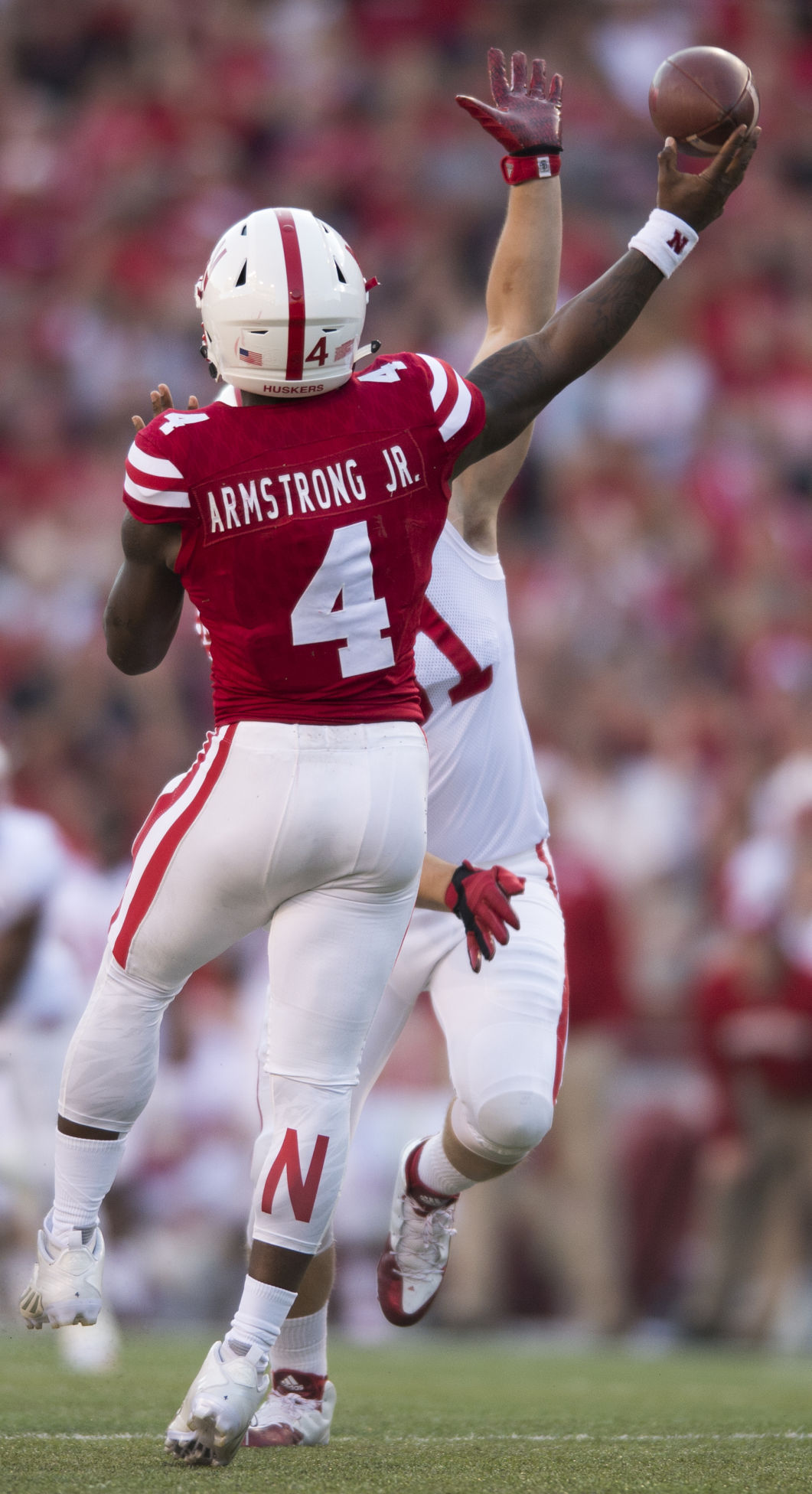 Tommy Armstrong's answer struck me as interesting. Asked whether anyone has influenced him as a leader, I expected him to say Brett Favre, with whom he's worked in the offseasons. Or perhaps a former coach.

Armstrong can be difficult to read.

"It was my offensive linemen giving me a lot of advice as a young kid," the Nebraska junior quarterback said. "It was having older offensive linemen, older guys in high school and coming into college — guys like Jeremiah Sirles and (running back) Malcolm Brown in high school (in Cibolo, Texas). They let me know how to do things the right way."

Armstrong is a good leader. Always will be, I'm guessing, whether he's running an offense or a business. Lately, though, he's struggled as a passer. Struggled to the tune of completing 35.6 percent of his passes for an average of only 117 yards in the past two games. The offense is struggling to find an identity. Armstrong, however, can't afford to back down as either a player or leader.

Sirles, a backup right tackle for the Minnesota Vikings, said Armstrong will keep pushing in a positive way. With Minnesota off last week, Sirles watched from the sideline as Nebraska (2-4, 0-2 Big Ten) lost to Wisconsin in Lincoln. Sirles plans to attend Saturday's game at Minnesota.

"Tommy's one of the tougher competitors I've met," said Sirles, a second-year NFL player who was acquired by the Vikings via trade from the San Diego Chargers. "I put him right up there with guys like Philip Rivers. He's fiery all the time.

"The kid wants to win so badly. I just think he needs to settle down a little bit. I think right now he's trying to do a little too much. I mean, there is a lot of pressure around that place. And as a quarterback, it all kind of falls on your shoulders.

Sirles said they talk weekly. Their relationship began in earnest midway through the 2013 season, when Armstrong took over as starter for an injured Taylor Martinez.

"When he got thrown into the fire, it was up to a lot of us veteran linemen to help him along," Sirles said.

Armstrong went 7-1 as a redshirt freshman starter that season. But now, he's running a new offense for Mike Riley.

"I think they'll bounce back," Sirles said of the Huskers. "I think Riley's going to try to help take some of the load off of Tommy to help this team continue to grow and kind of find who they are."

Riley leaves no doubt who he wants at quarterback. He said Armstrong's versatility (read: athleticism) sets him apart. So does his leadership. Sirles said Armstrong will remain steady — neither too high nor too low. He learned well from those 2013 linemen.

Reserve three or four hours: No. 7 Michigan State (6-0, 2-0 Big Ten) at No. 12 Michigan (5-1, 2-0 Big Ten), 2:30 p.m., ESPN: Can Michigan quarterback Jake Rudock win a game on such a grand stage? He's not a big-time playmaker. He lacks the sheer talent of Connor Cook, but Wolverines coach Jim Harbaugh is squeezing enough out of Rudock. Meanwhile, Michigan's defense will make life very difficult for most any offense. As a team, "Michigan just grinds you out — grinds, grinds, grinds," says Big Ten Network play-by-play man Kevin Kugler, a Lincoln native who worked the Wolverines' win last week against Northwestern. This season's compelling Michigan story is about to get better. "It's Bo Schembechler version 2.0," Kugler said.

A decent waste of time: West Virginia (3-2, 0-2 Big 12) at No. 2 Baylor (5-0, 2-0 Big 12), 11 a.m., Fox: Tell me you're not intrigued by Baylor's offense. The Bears are averaging 64.2 points per game, 725 yards per game, 9.1 yards per play and 4.49 points per drive. "Normal people might not see it because they don't know what we're supposed to do, but if we can get everyone executing exactly right, it will make the offense even better. It's a lot to ask for, but we have the potential to do it," Baylor standout tackle Spencer Drango said earlier this week.

Breakfast burritos will get you ready for those 11 a.m. kickoffs. What's not to like? Combine hash browns, sausage, bacon, eggs, cheese and chopped vegetables for a breakfast tortilla. Top the colorful mixture with cool sour cream and spicy salsa in this recipe inspired by RAGBRAI vendor Farm Boys. Check it out at midwestliving.com.

LET'S NOT OVERTHINK THIS

At the risk of being repetitive, I suggest Nebraska get fullback Andy Janovich still more touches. And, yes, I understand the element of surprise has worked in his favor. But as it stands, he has 228 yards on 21 touches for an average of 10.9. He has 19 carries for 170 yards (8.9). NU needs to narrow the scope of its offense. But Janovich should be part of that scope.

Thumbs up to Ohio head coach Frank Solich, the former Husker coach. With last week's 34-3 win against Miami (Ohio), he moved to a tie for fourth all-time in the Mid-American Conference with 77 triumphs. In 11-plus seasons at Ohio, Frank is 77-57. His career record is 135-76. At 71, he shows no signs of slowing down … or quitting, unlike another 70-year-old did this week at South Carolina.

Thumbs down to Pat Haden, the USC athletic director. Considering all the reports of Steve Sarkisian's drinking habits — the list is startlingly long — it's difficult to imagine that Haden was unaware of the coach's problem. Or did Haden turn a blind eye? Either way, there's only one conclusion: Haden shouldn't be the guy who hires the next USC coach.

The Cram Session staff tends to go overboard with Jim Harbaugh praise. Let's just say he's obviously a leading candidate for coach-of-the-year honors and leave it at that. Here are five other top candidates:

* Jim McElwain, Florida (6-0, 4-0 SEC). A lot of Gators fans were just hoping to get to a bowl this season — any bowl. They've gladly readjusted their goals. But a shakeup at QB adds to his challenges.

* Kirk Ferentz, Iowa (6-0, 2-0 Big Ten). I'm full of admiration for any head coach who responds to doubters and haters in the cool manner that Ferentz has done.

* Kyle Whittingham, Utah (5-0, 2-0 Pac-12). The Utes are thriving despite new coordinators on both sides of the ball.

* Dabo Swinney, Clemson (5-0, 2-0 ACC). If he can push the Tigers into the college playoff, he'll finally be recognized for what he's become — an elite head coach.

Steven M. Sipple: Fans look back longingly, with hope in their eyes

Husker fans want you to shoot them straight. But some questions have no answer right now, Steven M. Sipple writes.

Steven M. Sipple: NU receivers may be school's best since 2006

After a couple of uneven performances, Keith Williams' group was sharp in Saturday's win at Minnesota, Steven M. Sipple writes.

A great way to look at this football season's challenges and high points is a look back through Steven M. Sipple's columns.

Nebraska quarterback Tommy Armstrong's development — and frame of mind — is crucial in a big-picture sense because his leadership transcends the offensive side of the ball, Steven M. Sipple writes.

"We’ve got to look at personnel hard and where we need to get the guys the ball," Mike Riley said of a passing game that has fell flat the past two weeks.

While several key Huskers remain out, there is good news in that NU junior middle linebacker Josh Banderas is expected to play.

Nebraska vs. Minnesota: Keys to the game

Steve Sipple and Brian Christopherson discuss the keys to the game for Nebraska at Minnesota.

Steve Sipple and Brian Christopherson discuss their predictions for the Nebraska game at Minnesota.

Nebraska quarterback Tommy Armstrong Jr. (4) battles with Wisconsin's Michael Caputo (7) and Darius Hillary (behind Armstrong) on a first down run that was brought back due to a Huskers penalty in the first half on Saturday, Oct. 10, 2015, at Memorial Stadium.