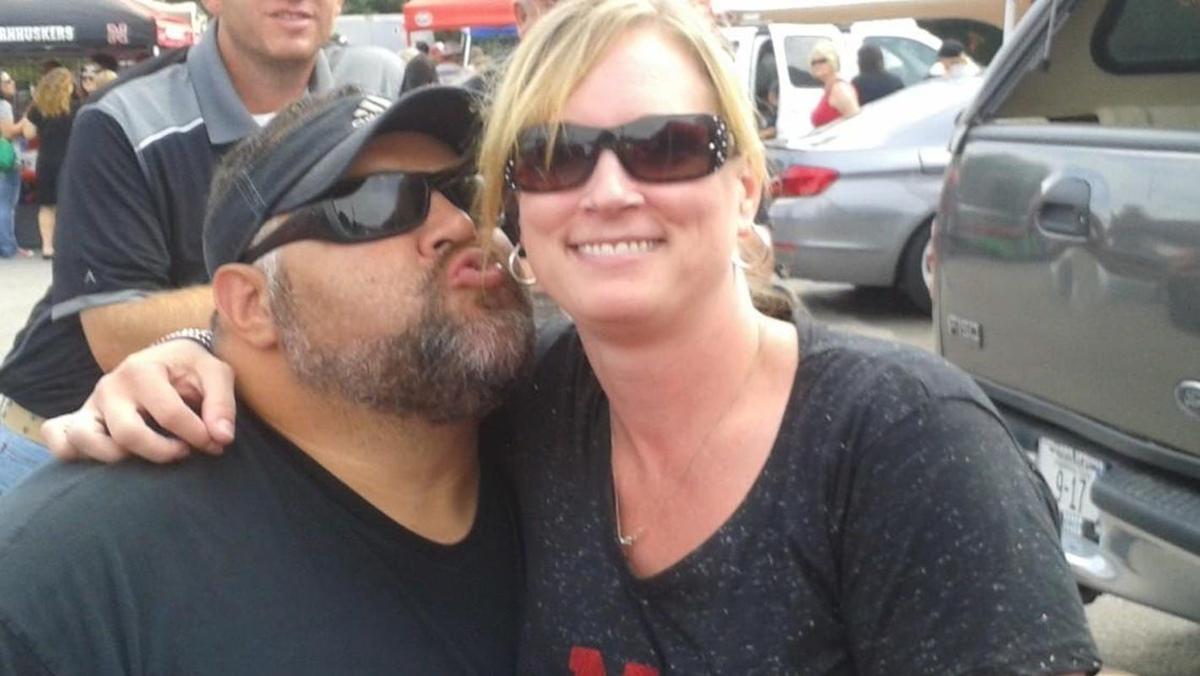 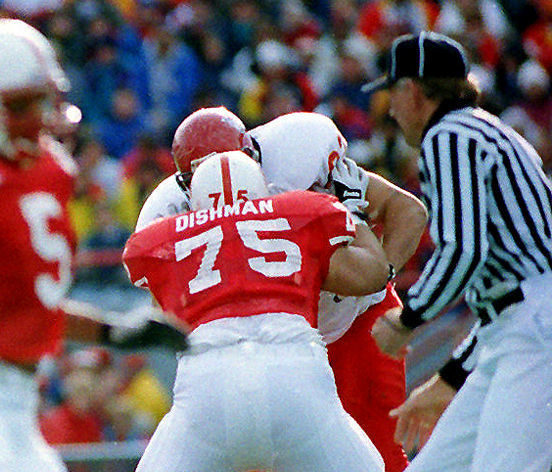 Chris Dishman, who was part of the 1995 national championship Husker team, lost his wife, Audra, to suicide in August.

He was a big, friendly dude with NFL talent.

That's how I remember Chris Dishman from his days as a Nebraska offensive lineman during the mid-1990s.

The big, friendly dude, who played eight seasons in the NFL, these days is promoting kindness and mental health awareness, for a heartbreaking reason.

Steven M. Sipple: Wait until next year? Don't attach that theme to Bolt's bunch in 2020

"You just really never know what someone is going through," the 45-year-old Dishman told me last week in an interview at a truck stop just west of Lincoln, on his way home from his job in Seward.

Dishman has no earthly idea why his wife, Audra, committed suicide last Aug. 13. The not-knowing part haunts him. He loves talking about Audra, though. It helps him cope. She was unselfish and fun to be around, he says. The couple cooked and danced in the kitchen. They went camping the weekend before her death, at a private lake outside Seward. They camped often. As best friends, they did almost everything together. After all, they started dating in the ninth grade in their hometown of Cozad, where he was a star athlete and she was a cheerleader.

Fast forward to late Thursday afternoon. As Dishman slowly walks into the truck stop, you notice he still has the gigantic frame — 6-foot-3 and more than 300 pounds. As he seats himself, his characteristic friendliness manifests itself immediately, as does a striking frankness about a tragedy that befell his family just sixth months ago. In fact, as he discusses Audra, he notes it's the sixth-month anniversary of her death.

Dishman is generally a low-profile individual, a typical offensive lineman in that regard. He doesn't seek out limelight. He's a protector.

"But I couldn't protect her, and that's what kills me," he says. "I couldn't save her. There was something deep in her mind that I didn't see, and I've known her since kindergarten."

He says he's passed through the stages of grief. But he still suffers. Tears still come. Of course they do. He doesn't keep a journal, but he does share his feelings on Facebook as a way to help others in similar situations. Most of all, he hopes people realize it's important to seek help.

If he can help others, that helps him.

"Being an advocate for mental health awareness and suicide awareness is a platform I want to stand on now," he says, aware of the societal stigma often attached to the discussion. "There was a time when I was like everyone else. If someone was seeing a counselor, it was like, 'Oh, his mind's all screwed up.' It was not necessarily a tough guy-type thing. It's almost just the way we grow up.

"You know how it is. If someone's seeing a shrink, you think there's something wrong with them. But there's not. Not at all. It takes a strong person to get help. There's just that stigma sometimes. As far as all that goes, there's something that really hit me around November. I was promoting this platform, and I wasn't seeing a counselor myself. So I was like, 'Man, I'm just a freaking hypocrite.' So I went and saw one."

He still does. He thinks it helps. But he still battles the notion he didn't notice Audra's issues. He says she never had issues with depression, at least that he knew about.

"We hung out every weekend at a little camping community (near Seward)," he says. "We had a great summer. Fridays, we would race to see who would get there first. We'd start up the golf cart and cruise around and see everybody and drink a beer here and there."

On Aug. 12, a Monday, Audra offered to bring Chris lunch at his job as deputy director of the Seward County Detention Center. But he was getting off work early that day because they had a mid-afternoon appointment.

The day was confusing, he says. When Audra showed up at their house that afternoon, she looked frazzled, he says. She was sweating and said she didn't feel well. She told Chris to go ahead to the appointment, saying she would meet him there. But she didn't show.

On his way home, Chris called her cell phone. No answer. He got home and she wasn't there. He called again. Nothing. He called their children, 23-year-old daughter Taylor and son Tim, 21. They hadn't heard from their mother.

Chris called the sheriff's department to do a welfare check.

"They pinged her cell and it showed her car was moving at the time, but I don't know if it really was moving because now, after the fact, it looked like (the signal) was bouncing off towers," he says. "It was close to the Butler (County)-Seward County line, so the 911 center was bouncing signals.

"I think that's how it works. I haven't really looked into it all that much."

A sheriff's deputy knocked on his door at 1:52 a.m. Audra was found in her car, deceased. Chris knows exactly how Audra died. We'll just leave it at that.

Dishman has heard from people who read his messages on social media. Some of those people were really hurting badly and he helped them. He'll keep helping people. He's a protector. Yes, he long preferred to stay in life's background, but he now puts himself out there for good reason, even as his heart tries to heal.

It's long fascinated me how life can be wickedly difficult and incredibly beautiful all at once. The big, friendly dude sitting in front of me at the truck stop was just another example of that.

Steven M. Sipple: Cook's actions and words suggest he has plenty more in store at Nebraska

Even with four national championships under his belt, Nebraska volleyball coach John Cook, at age 63, still takes time to promote the program.

Sipple addresses the ‘why’ in sports writing to Exec Club

Lincoln Journal Star sports columnist Steve Sipple has been writing columns for more than 13 years. He’s getting pretty good at it … because h…

Scott Frost was regarded as one of the best hires of the late-2017 coaching carousel. But he's only 9-15 overall at NU. Good thing he has thick skin.

Life in the Red: Pierson-El with a special dedication after his first XFL touchdown

On Sunday, De'Mornay Pierson-El scored his first touchdown in the XFL for the St. Louis BattleHawks and then dedicated the score to his grandmother, who passed away about a week ago.

The Huskers are adding Jonathan Rutledge to the staff as a senior special teams analyst, according the Huskers.com staff directory.

Nebraska's Red-White Spring Game is set for an afternoon kickoff and will again be broadcast live.

Driving for 6: Hitting the recruiting trail for 2022 updates, big summer plans and a personnel note

Coaches can't visit prospects, and prospects can't visit schools. But recruiting doesn't stop. Check in on a few standouts on the Husker radar.

Husker pitcher Colby Gomes says he hungers for pressure situations even after blown save in 2019 Oklahoma City Regional.

Chris Dishman, who was part of the 1995 national championship Husker team, lost his wife, Audra, to suicide in August.