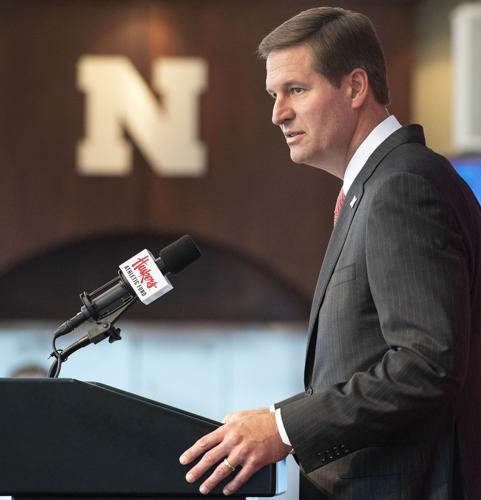 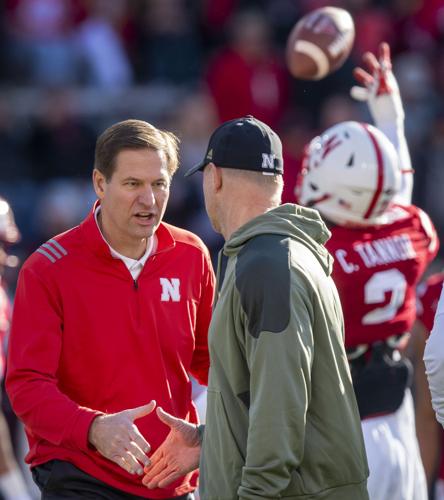 If you sit down with Nebraska athletic director Trev Alberts for an hour, you'll definitely catch a new-sheriff-in-town vibe.

It makes sense. He's been on the job for only seven months. So, new vibe, new message.

There's a distinct feel to it. Put it this way: If you're Fred Hoiberg with a 5-41 Big Ten record in two-plus seasons, or Scott Frost with a 10-25 conference record in four seasons, the new sheriff's core messages might make you fidget in your seat, if you weren't already.

Many of us have been there, right? New bosses tend to create a bit of anxiety, which is often healthy for an enterprise.

It seems healthy in this case.

"One of the things that I'm really passionate about is performance," Alberts told the Journal Star earlier this week during a wide-ranging interview in his North Stadium office. "I think an underlying, consistent communication about competitive excellence hasn't been enough of our narrative as a department."

"Well, with all of our core values, everything has to be about winning," he said. "We're in the competition business."

He noted the importance of winning in the classroom. That has to be a priority, no matter what.

It is a priority in Nebraska's athletic department.

"We have the highest graduation success rate we've ever had," Alberts said. "We're No. 3 in the Big Ten. There's so much about what we're doing that is awesome. But we get defined by football and men's basketball success."

Frost, 15-29 overall as Nebraska's football coach, clearly is on the clock. He knows it. Everybody knows it. Big Red fans expected so much more from the all-time Husker great. They expected Frost to easily surpass his predecessor, Mike Riley, who was 19-19 overall and 12-14 in the Big Ten. Because it hasn't happened, Frost revamped his coaching staff this offseason.

Guess what? The boss likes what he sees. Alberts said Frost reeled in the assistants whom he targeted. That's a good sign. I'm told Alberts kept his distance as Frost went about the process. That's also a good sign. It indicates trust.

"I'm just really pleased with Scott in the people he's brought in," Alberts said. "These are people who are going to challenge our way of thinking. That's what we need. We've done the same thing for four years and didn't get results. You've got some (new) coaches who've been around, who have some strong opinions and aren't afraid to communicate them. I think it's going to be helpful."

The new sheriff could help matters, too. Yes, new bosses tend to create a healthy tension and a renewed sense of urgency.

Tell me you don't hear urgency in Alberts' words.

"We're going to evaluate and dive into every single thing that touches our football program," he said. "We're going to ask ourselves a simple question: Is that elite? I think we owe it to ourselves. It's that important. We ought to be doing it every year."

While Frost's crew in 2021 never lost by more than nine points, Hoiberg's squad has been noncompetitive at times this season, losing by 35 to Michigan (which now sits at 7-7 overall); by 31 to fourth-ranked Auburn; by 28 to a Rutgers squad that then dropped a 66-49 decision at Penn State; and by 27 to No. 7 Purdue on Friday night in West Lafayette, Indiana.

The vibe in the Nebraska hoops fan base (and media corps) was Hoiberg's crew had virtually no chance to beat Purdue, even though Purdue had previous losses to Wisconsin and Rutgers. No chance to win? Seriously? Worse, many Husker hoops fans now react to such losses with a shoulder shrug.

If you're an ardent Husker hoops fan, perhaps it's heartening to hear the new sheriff's emphasis. He's in the competition business.

Along those lines, you wonder whether Alberts might ask Hoiberg to take a serious look at his coaching staff, specifically the recruiting operation. Let's be clear: It's not a young roster. Starters Alonzo Verge and Lat Mayen are in their fifth collegiate seasons. Same goes for key reserve Kobe Webster. Trey McGowens, set to return from a foot injury, is in his fourth year, as is starting big man Derrick Walker.

Another roster turnover lies ahead.

But, yeah, we get it, Nebraska is a football school. That isn't changing, amigos.

"Football's success at the University of Nebraska is really non-negotiable," Alberts said. "A 3-9 record is not sustainable to our business model. We have to understand that. A lot of it is tied to revenue. A lot of it is tied to fan interest. We have one of the strongest brands in the country. I mean, we're a three-win team and we play Ohio State at noon on Fox, and we're the highest-rated college football show the entire weekend?"

"I go to the Michigan game (a 32-29 loss in revved-up Memorial Stadium) and see that environment, and I think, 'Imagine if we were winning 10 games. This place would be bonkers," Alberts said.

Clearly, the new boss is passionate about performance, about winning, about being elite.

He's turned up the heat in the building, is my read.

"How do we create the most physical football team in the Midwest?" Husker AD Trev Alberts asks. "Just start there." Sounds like a plan. A realistic one.

Nebraska landed a commitment from juco RB Anthony Grant, who rushed for more than 1,700 yards this fall.

Changes are being considered for Memorial Stadium as NU officials "work through an outstanding modernization plan with community leaders," A.D. Trev Alberts says.

The "break" in the Nebraska men's basketball team's January schedule arrives Monday. That break includes playing one of the best big men in the country.

Nebraska veteran inside linebacker Will Honas will attempt to play his seventh year of college football elsewhere.

'You've got to capitalize:' Trey McGowens returns, but Huskers can't get past Hoosier hurdle

Indiana never trailed, but Nebraska was never out of it. In the end, Fred Hoiberg's crew couldn't get over the hump in a sixth straight loss.

The 6-foot-2, 200-pounder was originally a three-star prospect in the 2020 recruiting class.

There's a decent argument to be made that McGowens could have been the difference in at least a few of NU's close losses over the past two months.

Nebraska currently has fewer than seven scholarship players available, which is the Big Ten minimum for a team to play a game.