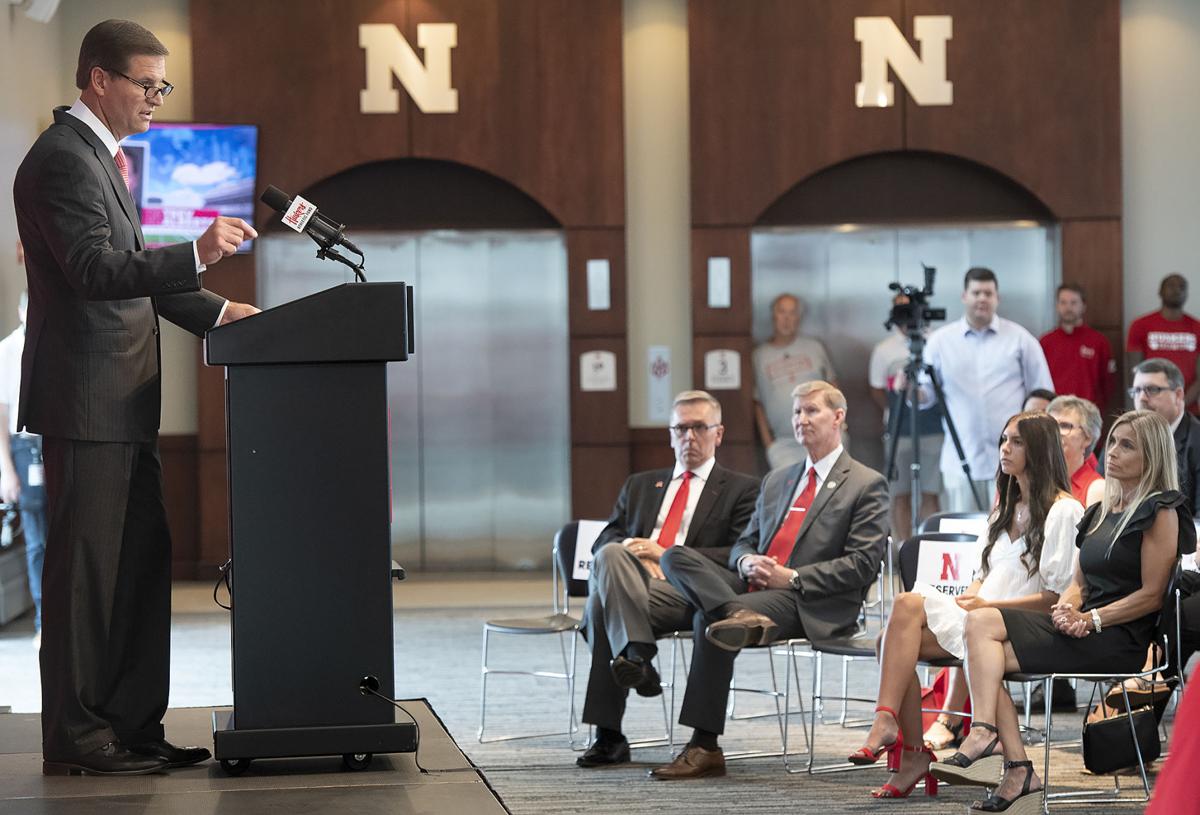 Nebraska introduces Trev Alberts as its athletic director during a press conference Wednesday at Memorial Stadium. 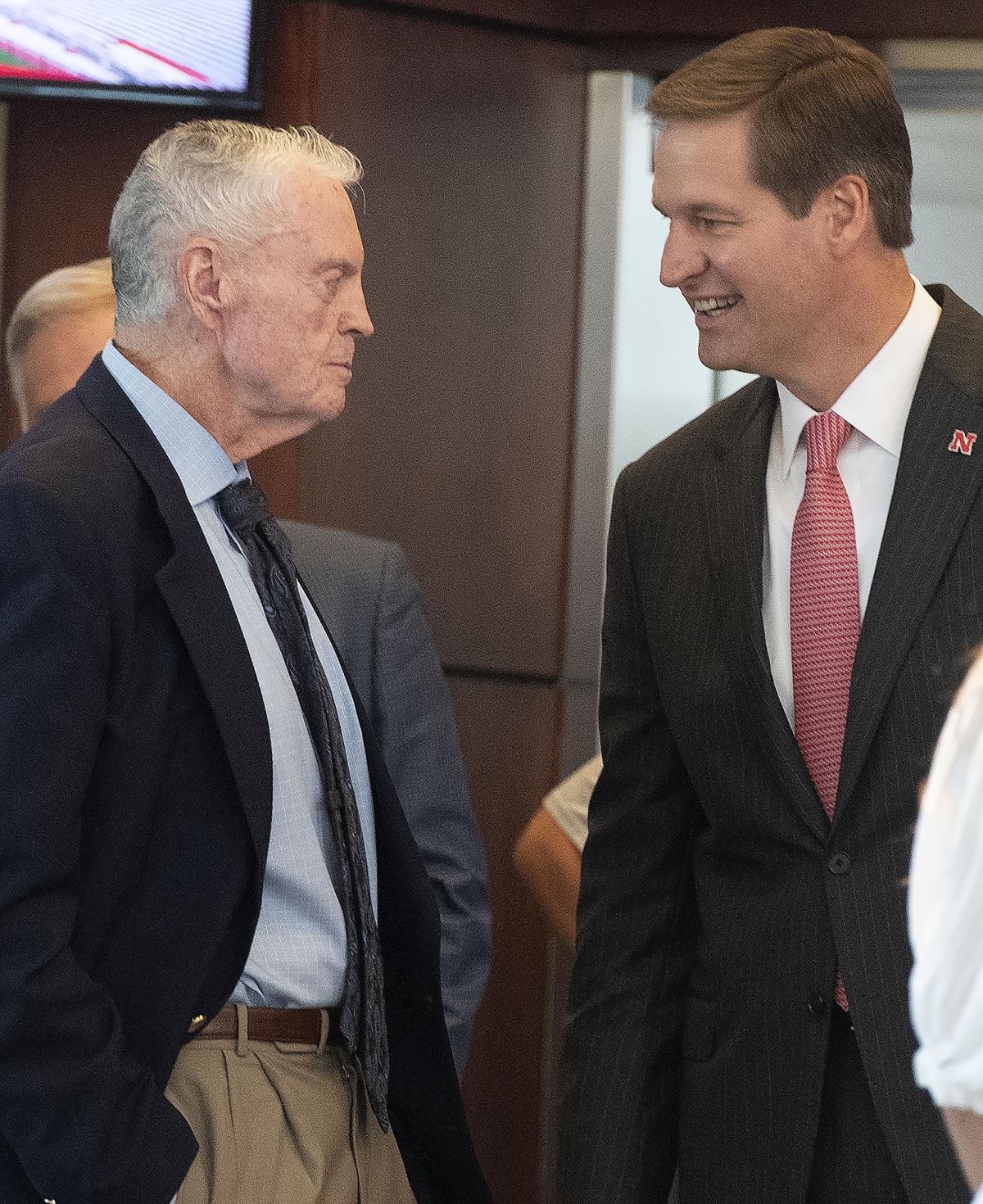 Trev Alberts should feel no need to apologize.

He did it, anyway.

"I'm sorry, I didn't know that was going to happen," he said of the emotions that he had to corral a handful of times Wednesday. "It wasn't planned."

"It was just surreal," he said of recent days leading to his introduction as Nebraska's 14th athletic director. "I haven't really slept in a week. I think I slept three hours last night, which might be part of my problem."

There was no problem. None at all. He handled the big room in Memorial Stadium in excellent fashion.

Alberts definitely held my attention, which is saying something. I'm like a lot of people around these parts. Since 2000, we've cycled through so many Nebraska athletic directors (five) and head football coaches (four) that these grand news conferences have become old hat. But then along came the Husker football legend Alberts — a tall, measured and humble native Iowan who generally kept a low profile as Nebraska-Omaha's successful AD — and suddenly this sort of announcement felt like it should always feel around here.

It felt massive, and it felt right.

"Nobody was a bigger Husker fan than Linda Alberts," said the 50-year-old Alberts, referring to his late mother.

He fought back tears as he said it. He apologized. No need for that, Trev.

"I love this place," he said in his opening remarks, fighting back tears.

Or maybe the tears were there. I couldn't tell from my vantage point. Doesn't matter. But this does: Nebraska has an AD that the vast majority of Husker fans will support enthusiastically, especially if they saw Alberts at work Wednesday. He was strong. He was matter-of-fact. He made no grand predictions yet projected confidence. One of his foremost mentors, Tom Osborne, thought Alberts comported himself extremely well.

Alberts described Osborne, the former Nebraska Hall of Fame head coach and athletic director, as "an authentic leader." I think that's what we'll get in Alberts. That's the impression he leaves. I wasn't surprised. I've known Alberts since his playing days in the early 1990s, although it's not like we've chatted much in recent years. He had a UNO athletic program to run. He ran it as a behind-the-scenes AD. That's another thing I like about him.

He has a big presence. He's 6-foot-4 and played at roughly 250 pounds as one of the greatest Blackshirts of all time. I mean, the guy sacked Charlie Ward three times in the 1994 Orange Bowl. Yeah, that enhances his aura in the eyes of many fans. But it isn't like Alberts lives in the past. His humility and work ethic are perhaps his most appealing traits, along with the love he has for dear ol' NU.

That love is a good place to start this conversation. We've seen a lot of leaders cycle through NU with mixed results. But not all of them possessed Alberts' emotional attachment to the school and its athletic department. You can't fake what you saw from Trev on this day. Granted, it guarantees nothing. But, again, it's a good place to start. Wednesday was a good start.

The search: How Nebraska whittled down a list of 25 candidates, with help from current players and coaches

The overview: The Trev Alberts story

The reaction: What are people saying about the hire at a local and national level?

The timeline: From Blackshirt to Nebraska AD

Alberts also showed savvy. He was asked if he's noticed which Nebraska programs are operating at a particularly high level — you know, at a level other programs in the department might seek to emulate.

He did mention Husker baseball coach Will Bolt's success in 2021.

"I told Will this morning his hire of Rob Childress (as director of player development), to me, is indicative of a coach who's very secure with himself," said Alberts, referring to the 52-year-old Childress' wide-ranging success in coaching. "It's about how do we find the best help we can and go out and find a way to win.

"But I don't want to say it's in just the baseball program. It's across the board here. But there are areas, obviously, that we can make an improvement."

Alberts made clear that Nebraska's struggles in football and men's basketball never came up in discussions with UNL Chancellor Ronnie Green and NU system President Ted Carter. They were looking for a leader, first and foremost.

Bottom line, Alberts expressed support for Frost and said he'll do what he can to help the coach succeed because that's how good ADs operate.

"I believe in Scott and want to be helpful," Alberts said.

You have to think Frost, 12-20 in three seasons, will respect Alberts.

In fact, "Scott expressed to me privately his interest, desire and support of having me in this role," Alberts said. "He wants to go to work together. That's my perspective as well. I think Scott is a tremendous football coach. I think he has a lot of great football coaching ahead of him. My job is to maybe help on some of the periphery. Allow him to do what he does best."

"We'll dive in," the new AD said. "First and foremost, we've got to establish trust."

Alberts emphasized the importance of trust. He mentioned something else that struck me as vitally important.

By the way, I also liked this about Alberts: He emphasizes there are no guarantees in football or in any other sports. Too many Nebraska fans for far too long acted as if the football program was entitled to nine-plus wins per season.

My God, we should know better by now.

He endured rough times at UNO. The Mavericks' historic move up to NCAA Division I a dozen years ago came at the expense of football and wrestling. His naysayers will never let those cuts go. They still lambaste him. But he handles criticism with calm and poise. His work at UNO, even the hard stuff, serves only to convince me that he can handle the heat at Nebraska.

It can get awfully hot around here, if you know what I mean.

"It matters, doesn't it?" Alberts said of the level of caring by fans and former players. "I'm just happy to be a little part of it."

Happy and emotional. Not a bad way to start.

A look back at Trev Alberts' career, from signing to play at NU in 1989 to returning Wednesday as the Huskers' next AD.

Trev Alberts is the new AD at Nebraska. Reaction from the state and nation

From astronauts to politicians to national writers, here's a sweep through social media for reaction on Nebraska's hiring of a new AD.

A native of Suwanee, Georgia, Quinton Newsome emerged in the spring as the top corner opposite returning starter Cam Taylor-Britt.

What had Will Bolt 'nodding my head' during Trev Alberts' speech; Fred Hoiberg reacts, too

As for what the Husker baseball coach liked? For starters, the "no-excuses" part of it.

The main source of intrigue surrounding Payne this season? It's largely about something Nebraska's often lacked as a program in recent years.

Most recently, Dr. Lawrence Chatters served as vice president of student affairs at Midland University and as the school’s chief diversity officer.

Nebraska introduces Trev Alberts as its athletic director during a press conference Wednesday at Memorial Stadium.