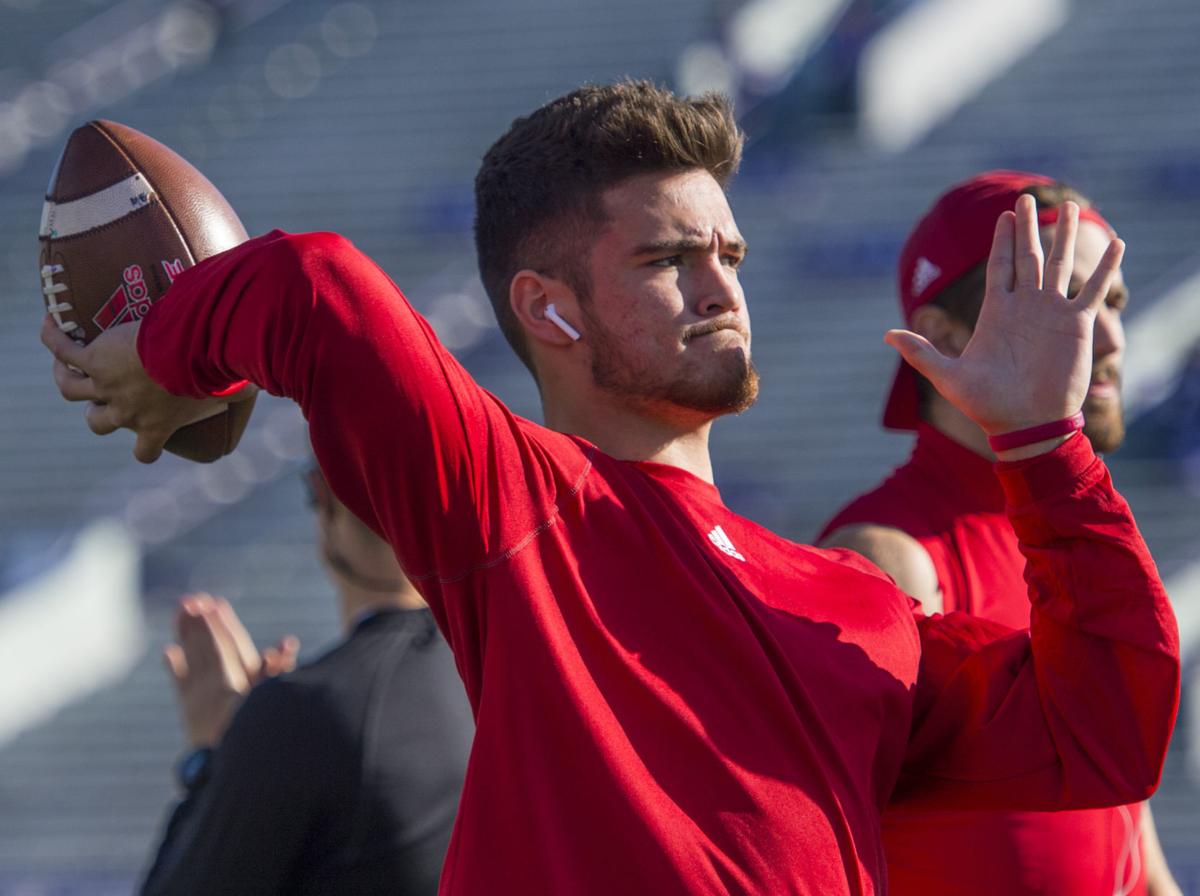 Nebraska's Noah Vedral warms up for the game against Northwestern last season. 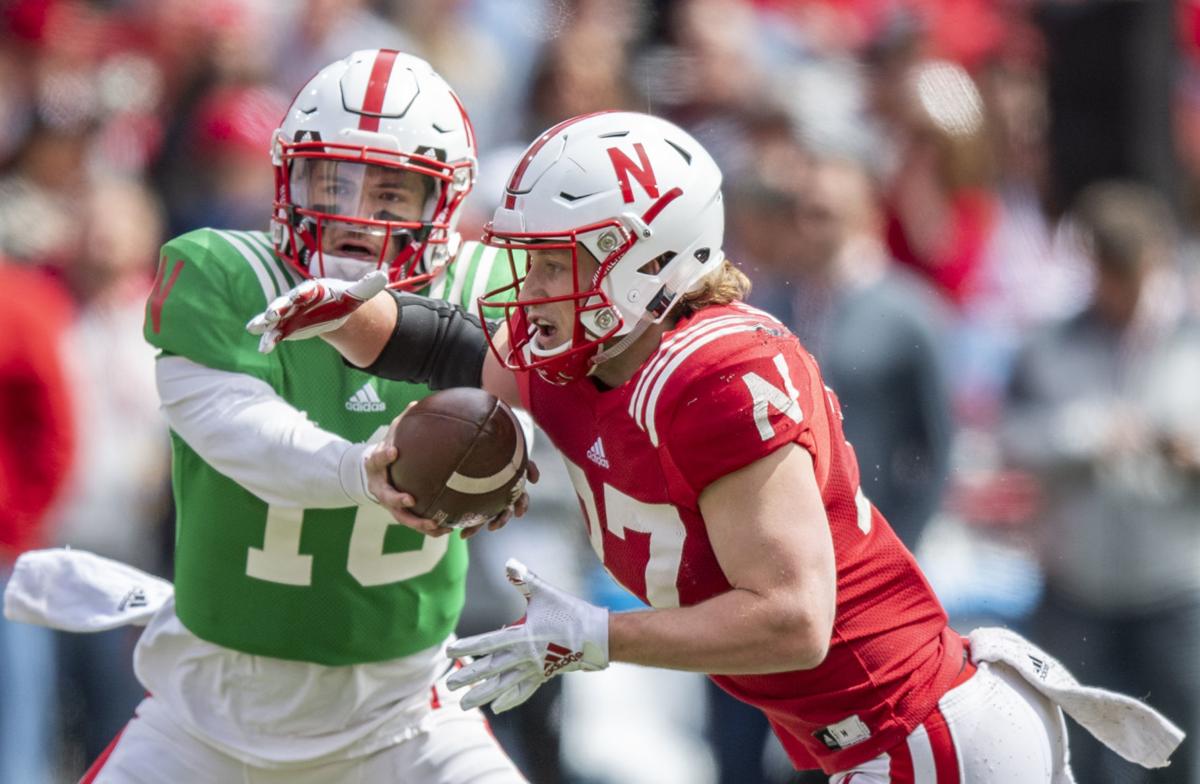 Quarterback Noah Vedral (16) hands the ball off to running back Wyatt Mazour during the first half of the Red-White Spring Game on April 13 at Memorial Stadium.

Mario Verduzco is the quarterback expert around here.

But you don’t have to be Bill Walsh to recognize the smoothness with which Noah Vedral operated during the Red-White Spring Game earlier this month. The Bishop Neumann graduate was 13-for-19 passing for 144 yards and rushed twice for 17 yards.

Vedral looked much more comfortable in the April 13 Red-White scrimmage than he did last October against Bethune-Cookman. Playing the entire second half after Adrian Martinez engineered a 38-3 halftime lead, Vedral was only 2-for-9 passing with an interception while netting 13 yards on seven carries.

But Verduzco, the Nebraska quarterbacks coach, emphasizes that Vedral wasn't granted eligibility until two weeks before that game. A transfer from Central Florida, he had worked with the scout team until mid-October, so his timing was awry at times. Great athleticism aside, he plays in a sport that demands good timing.

I was struck by how much more in-command he looked April 13.

"Smooth" is an excellent word to describe Vedral, his position coach says.

Vedral, a sophomore, is Nebraska's No. 2 quarterback entering the long offseason. He will continue to chase Martinez, also a sophomore, while simultaneously trying to stay ahead of junior Andrew Bunch, redshirt freshman Matt Masker and true freshman Luke McCaffrey. Never underestimate the importance of May, June and July in a football program. Important work is being done, and QBs have to lead the way.

There is excellent competition among Verduzco's group. It feels healthy. It's why QB is one of the most stable parts of Frost's second-year program. Granted, some wonder about the drop-off at quarterback after Martinez. I have wondered about it, too, which is why I watched Vedral intently during the spring game. I admittedly had the Bethune-Cookman game, his only appearance last season, in the back of my mind.

If nothing else, there's now more balance in the discussion, at least the ongoing one in my head.

“That game against Bethune-Cookman was a function of, hey, he's on the field with some guys who are maybe having some issues of their own, and that obviously has a dramatic impact on us (quarterbacks) — right, wrong or indifferent," Verduzco said last week.

As for Vedral's 2018 season as a whole, “It was just kind of a wash for the guy," Mario said. "It was just a weird, unsettling sort of thing for him. It kind of showed up like it showed up. But how I know Noah Vedral is how I saw him in this past spring game. That’s what I see at every practice.”

Vedral’s work ethic is excellent, Verduzco said. The 6-foot-1 200-pounder understands what needs to be done. He listens to Verduzco when the coach emphasizes the need for his guys to acquire power (read: leadership) through performance.

But there is a burning question among fans: Does Verduzco feel comfortable with the gap between QB1 and QB2?

“I don’t think there’s a quarterback coach or an (offensive coach) in the country that ever feels totally comfortable with that,” Verduzco said.

Verduzco emphasizes his job is to make sure the gap isn’t wide. It’s his job to identify areas in which each of his quarterbacks needs to improve, and to diligently and enthusiastically address those areas.

In that regard, Vedral needs to get bigger and stronger, Verduzco said.

"Just that mass will allow him to generate more thrust on the ball, even though he already throws a really damned good ball,” Verduzco said. “Otherwise, all those other pieces of the puzzle that we saw in place when he was backing up McKenzie Milton (at UCF) are still in place now.

“Let me give you an example: We were beating a team, Noah goes in the game, and the defense zone dogs him from the field. He sees it, changes the protection, and throws a completion. That was a true freshman. It was impressive.”

Vedral will be even better going forward, especially as he adds strength and size.

That'll make the ride that much smoother.

Nebraska sophomore Adrian Martinez is regarded as a rising star in the college game. Husker fans can’t get enough of him. But that doesn’t mean he has it easy with his quarterbacks coach at NU. “I just drive him nuts about his feet,” says Mario Verduzco, referring to Martinez’s footwork as a passer. “He thinks I’m, like, totally out of my mind.” In a good way, of course.

In return to Wood River, Husker coach Frost revels in being 'just Scott'

Scott Frost returned to Wood River for the first time in "way too long" Tuesday night in support of a proposed child care facility and told plenty of stories and jokes along the way.

Breon Dixon arrived on Nebraska's campus as a touted transfer. He is leaving NU having made only one tackle for the Huskers.

Scott Frost says 99 percent of his players have fully bought in to the Nebraska football program under his leadership. The second-year Husker head coach spoke Tuesday for a radio appearance in Omaha.

If you were to rank the best overall quarterback situations in the Big Ten, you would start with Michigan and Nebraska. It's a close call at the top. But get this: Ohio State may be down the list a ways with only two scholarship quarterbacks on hand in the wake of Matthew Baldwin's decision last week to enter the NCAA transfer portal.

Rahmir Johnson has lofty track goals for his final spring at Bergen Catholic in New Jersey, then he joins Nebraska's football team as a running back in early June.

Driving for 6: A spin around Husker recruiting and an interesting group of in-state prospects

Let’s take a drive and check in on some Nebraska recruiting.

It’s been a busy week in the Omaha Metro area on the football recruiting front. Already, 2021 prospects Avante Dickerson (Omaha Westside) and Teddy Prochazka (Elkhorn South) have drawn big hosts of suitors to their respective schools.

The NBA G-League never will be mistaken for the NBA. In fact, Isaiah Roby, the Nebraska junior forward considering an early jump to the NBA, would do well to pick ex-Husker guard Evan Taylor’s brain about life in the G-League.

A recent run of high-level high school talent in Nebraska and the Omaha area means opportunity for the Huskers, but also more recruiting competition locally.

Barrett Ruud was as reliable as the U.S. mail as a Nebraska linebacker, seemingly always in the right position to make a play. He seldom missed tackles, essentially always closing the deal. Sort of like he's done as a recruiter for the Huskers.

Nebraska's Noah Vedral warms up for the game against Northwestern last season.

Quarterback Noah Vedral (16) hands the ball off to running back Wyatt Mazour during the first half of the Red-White Spring Game on April 13 at Memorial Stadium.