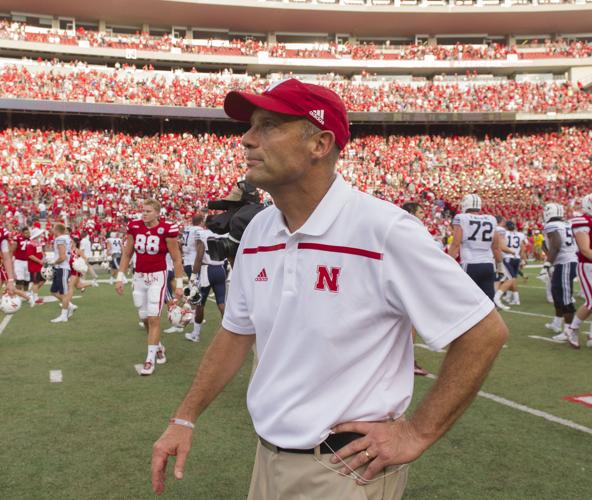 Nebraska coach Mike Riley walks toward the locker room, his first game with the Huskers ending on a BYU touchdown pass on the game's final play. 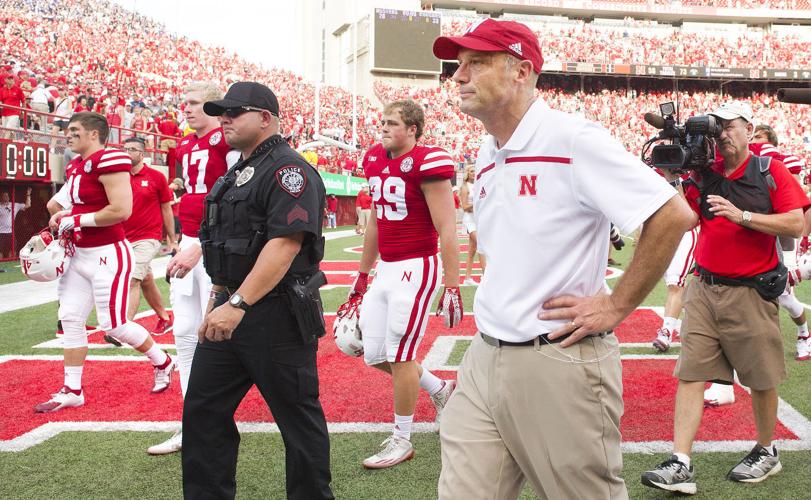 Nebraska head coach Mike Riley walks off the field after a loss to BYU on a last-second touchdown pass caught by the Cougars' Mitch Mathews with no time on the clock on Saturday, Sept. 5, 2015, at Memorial Stadium.

Nebraska football fans are acutely familiar with this stuff by now — the ebbs and flows and moments of soaring joy and searing pain that are inherent in the game they adore.

They've experienced the gamut over the years, especially recent years.

They fully understand that transitions from one coaching staff to the next can be eventful, and painful.

But this was ridiculous.

The Mike Riley era opened Saturday with a loss on ... don't try to tell me you predicted this ... a Hail Mary.

I hope Husker fans are full of grace.

"It was a heck of a play they made," said Nebraska offensive coordinator Danny Langsdorf. "You got that pit in your stomach. But we shouldn't have been in that position."

He's right. Nebraska lost because it couldn't do what so many great Husker teams never had a problem doing. That is, converting on third-and-short. The Huskers in the fourth quarter failed on two third-and-1s and a third-and-3. Three runs, no dice.

Those failures ultimately led to BYU's wing and a prayer, which was answered when backup quarterback Tanner Mangum's 40-plus-yard heave was snatched in the front of the end zone by 6-foot-6 Mitch Mathews with no time left.

Jordan Westerkamp knows that part of the end zone rather well.

Nebraska's defense on the play wasn't great. Two defenders converged on Mathews' back. Nobody made a forceful attempt to bat down the ball, and BYU celebrated a 33-28 triumph before 89,959 fans at Memorial Stadium.

In searing heat — game-time temperature was 93 degrees — Nebraska felt sharp pain in defeat, but I didn't sense overwhelming pain from the players or coaches or even many of the fans, for that matter. Yeah, it hurt. Of course it hurt. But you got the feeling from the players they are optimistic about the season. My read was they processed the loss quickly. They had a tough team beaten, but let it slip away.

Credit BYU. It's a rugged, well-coached outfit. Or so it appeared. The Cougars prevailed even with star quarterback Taysom Hill sidelined much of the day -- including all but the first two plays of the fourth quarter because of a season-ending ankle injury. The Cougars have an 11th-year head coach in Bronco Mendenhall. They know exactly who they are and showed the sort of seasoning you might expect, even in an opener. Don't underestimate the importance of that factor.

"I think there's an advantage there for sure, from a comfort level standpoint," Langsdorf said. "But I thought our guys, besides being a little sloppy and having some silly procedure stuff penalty-wise, were really good.

"I thought we had very few communication blunders and things like that. I didn't think we had many of the first-game issues that sometimes you'd have in a first game with a new staff."

All in all, Nebraska played about how you would expect. You saw flashes of potential, but also evidence of a coaching transition. The Huskers' 12 penalties for 90 yards were killers. You saw hesitancy in certain players, especially in a couple running backs who need to run with much more abandon, particularly between the tackles. You saw a secondary that seemed confused, corners perhaps being asked to do too much.

Riley obviously saw plenty that needs to improve. But who thought this would look anything close to a finished product?

"We went sloppy after we got off to a pretty clean start," he said.

When his teams play well, Riley likes to say, "That looks like football." He saw some good football at times, he said. He saw plenty of fight and heart. And for that, you hope Husker fans show some grace.

It's Game One, for crying out loud.

It was Armstrong's first test in a new system. Give him a solid "B." He completed 10 of 12 passes in the first quarter before sliding to 3-for-15 in the second. He kept fighting, as he always does, and finished 24-for-41 for 319 yards and three touchdowns, with an interception.

He ran nine times (for a net of 2 yards), but designed QB runs were few and far between. I get that. This team needs Armstrong badly, especially if the running backs don't raise their game a couple notches.

They did show more promise in the second half, thanks in part to better blocking. The line was so-so all day.

"Then, I thought we got to the edge a little better than we did in the first half."

Langsdorf is as even-keeled as they come. At least that's my impression. That could come in handy, because I think we're going to see a lot of close games this season.

But to lose on a Hail Mary? To begin an era?

"Am I supposed to make an opening statement after that?" Riley asked reporters in the postgame news conference.

Nah, no statement needed. The day was long and hard enough.

Trending upward — Dedrick Young and Luke Gifford, a pair of Nebraska freshman linebackers, had some rough spots but more than held their own. Young made seven tackles. "They knew what they were doing, knew where they were supposed to be," junior middle linebacker Josh Banderas said.

Trending downward — Nebraska's secondary was regarded as a strength of the defense, but it looked confused and very ordinary at times. Lack of communication was an issue, said junior safety Nate Gerry. So was the fact BYU receivers simply outfought NU for a couple passes.

Holding steady — Husker junior quarterback Tommy Armstrong came back strong from a lackluster second quarter. He managed the offense well and generally made good decisions with the ball. He's going to need some play-makers to step up to take some heat off of him.

Yays and Nays from Nebraska-BYU

It's understood at this point you'd rather just take out that "Men In Black" memory eraser and wipe the whole Hail Mary thing away.

Nebraska offensive coordinator Danny Langsdorf indicates a willingness to stick to one back if someone gets in a rhythm, Steven M. Sipple writes.

One second until smiles. For whatever flaws Nebraska exhibited in the previous 3½ hours, for all the bruises suffered, the way to happiness wa…

Husker defense improved in second half, except for the one big play

Mark Banker was proud of some of the things Nebraska did in the second half of Saturday’s loss to BYU.

Armstrong starts strong in opener, but falls short of win

Photos: Highlights of the Husker opener

Check out the best moments from gameday in Lincoln as the Huskers opened their season vs. BYU.

Throw the Bones message board

Talk Huskers at our new message board forum, Throw the Bones. Register, log-in and throw down your hot Husker takes.

Riley on moving on from BYU loss

Head football coach Mike Riley talks about the changes the team made in the third quarter against BYU on Saturday, Sept. 5, 2015.

Nebraska coach Mike Riley walks toward the locker room, his first game with the Huskers ending on a BYU touchdown pass on the game's final play.

Nebraska head coach Mike Riley walks off the field after a loss to BYU on a last-second touchdown pass caught by the Cougars' Mitch Mathews with no time on the clock on Saturday, Sept. 5, 2015, at Memorial Stadium.