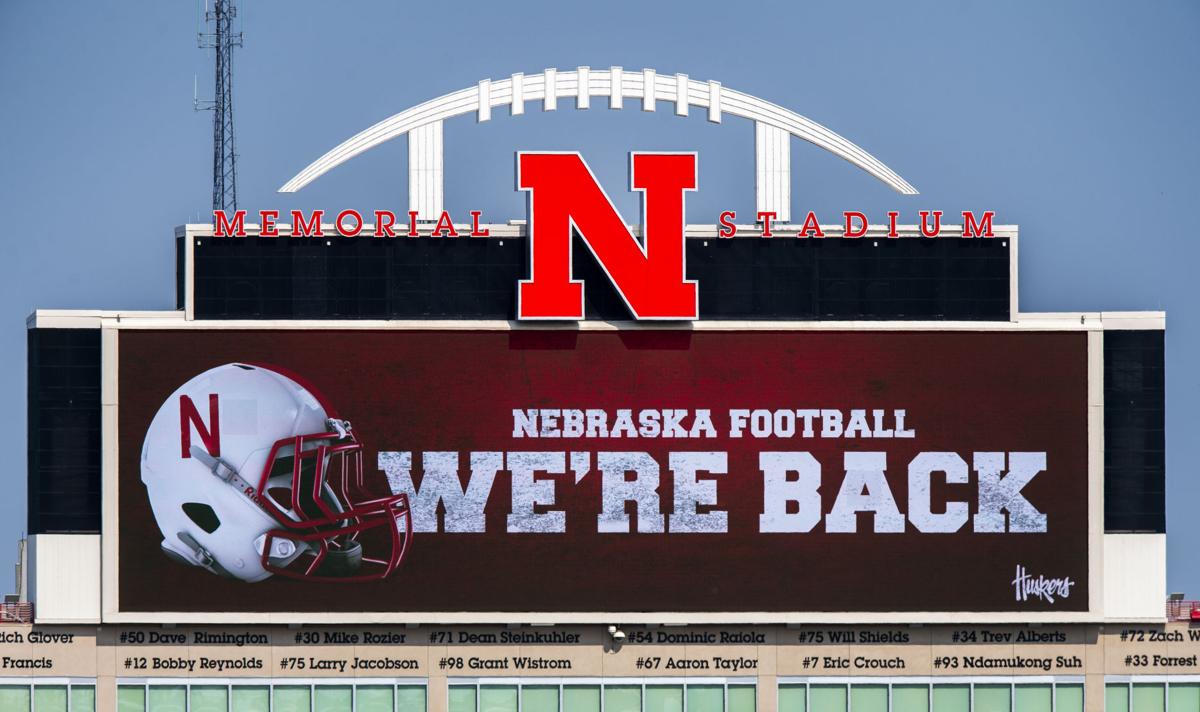 Memorial Stadium's north stadium video board projects the news of the return of Big Ten football in October on Wednesday. 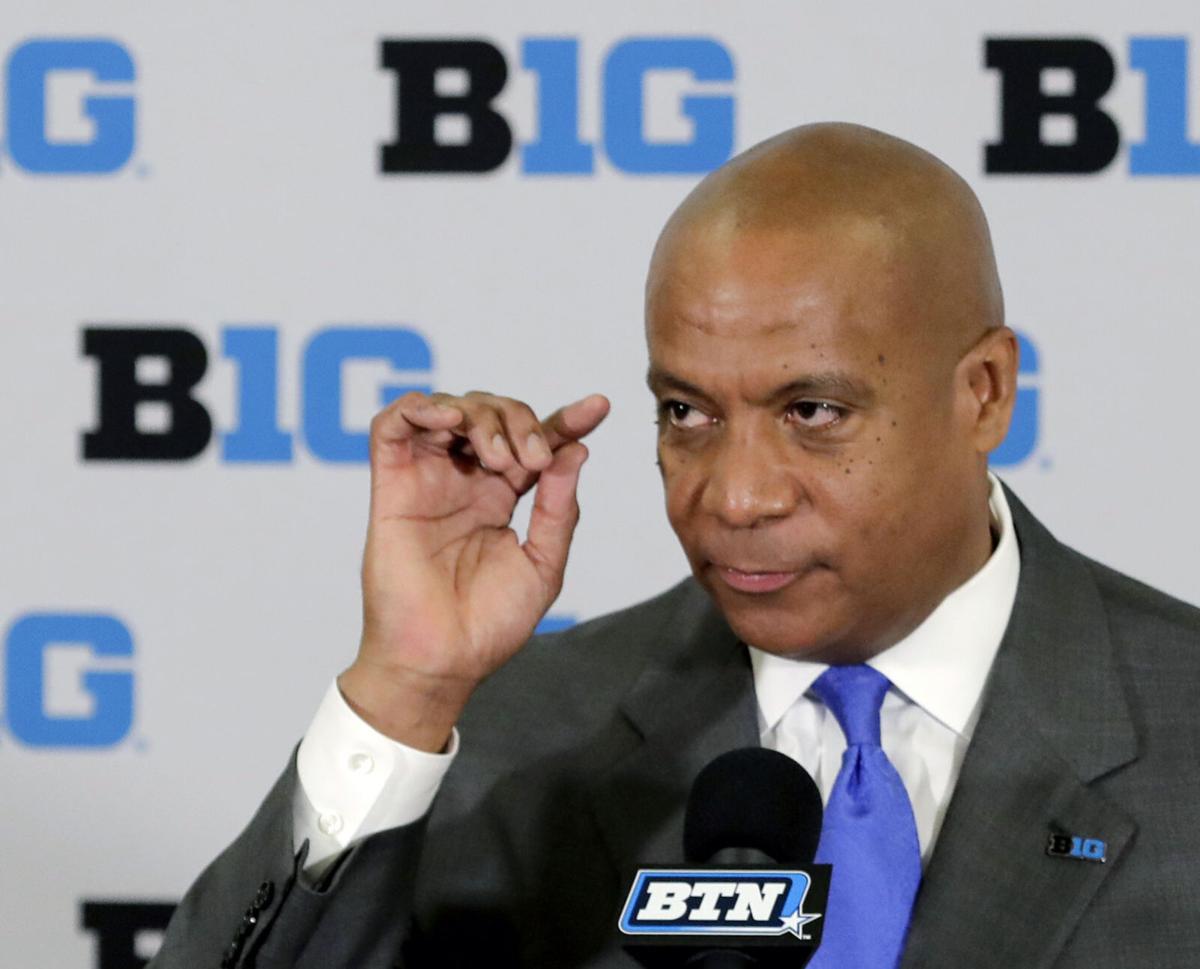 Big Ten commissioner Kevin Warren talks to reporters after being named to the position during a news conference June 4, 2019, in Rosemont, Illinois.

For now, no fans allowed in Memorial Stadium when Huskers return

A look at the Big Ten's coronavirus strategy

About a month ago, Bill Moos had a troubling scenario in mind.

You could see the seriousness in his eyes. The Nebraska athletic director had a vision of the SEC, Big 12 and ACC pushing forward this fall with their college football seasons. We're talking about pushing forward to the end, right down to bowl games and maybe even a national championship game.

Meanwhile, the Big Ten and Pac-12 would be on the sidelines until at least January — you know, until the big boys' season was basically done.

"I always thought the JV game was before the varsity game," Moos said then.

Ouch. A blow to the kidney.

Fast forward to Wednesday morning. The Big Ten decided it would try to play football this fall after all. It actually became a varsity outfit, as should've been the case all along. We'll see what the Pac-12 does for a football season, but the West Coast conglomeration doesn't appear to ready to start Oct. 23-24, as is the case with the Big Ten.

But how many Big Ten teams will end up playing a full schedule, given the stringent medical standards unveiled Wednesday? Will the season even get off the ground? That's a big question among Nebraska officials. It'll be a colossal challenge.

A lot of questions remain, including how difficult is the Big Ten going to make Nebraska's schedule?

Along those lines, I'm guessing Nebraska fans will regard Wednesday's news with a degree of skepticism, as they should. I'm guessing it's a muted celebration. My read is the vast majority of Husker fans wanted to play a schedule that began in September. Husker coach Scott Frost pushed hard for that scenario in a Zoom session with reporters Aug. 10.

On Aug. 11, the Big Ten Council of Presidents and Chancellors voted 11-3 to postpone the fall season, with only Nebraska, Ohio State and Iowa voting to play.

Give Ohio State and Nebraska credit. They didn't go down quietly. Frost and NU administrators pushed privately and even publicly to play. They talked openly about playing an alternate schedule. Big Ten Commissioner Kevin Warren, in so many words, said forget that noise. But NU kept pushing, still expressing desire to play this fall. Parents kept pushing. Eight Husker players filed a lawsuit against the Big Ten (they dismissed it Wednesday). Even the governor was on board with the program's can-do mindset.

So, now this. A re-vote is in the books. It was unanimous this time. Play ball! Yes, it's exciting. Sort of. What if this thing gets grounded again? Remember, the Big Ten unveiled a 10-game, conference-only schedule Aug. 5 during a grand presentation on BTN, only to have it torn apart six days later. Then, on Aug. 19, Warren said the decision "wouldn't be revisited."

Moos and Frost thank their lucky stars it was revisited. It wasn't all luck. Nebraska's determination to play helped keep the conversation alive long enough for advances in the medical field — particularly rapid-response antigen testing — to take hold. If you're looking for a game-changer, that's it.

The medical part of the discussion is intriguing. To wit: If a Big Ten team's COVID-19 positivity rate is greater than 5%, it must stop regular practice and competition for a minimum of seven days. So, a question: If a team knows it's clean as a result of daily testing, why does the positivity rate rank so high in terms of importance in the league's new guidelines?

It's been an interesting few months, with sportswriter types becoming versed in myocarditis and COVID-19 testing, all the while covering a conference that handled matters so poorly that it took me back to my time covering the Lincoln Capitols of the defunct NIFL. The Capitols did the best they could with limited resources. The wealthy Big Ten was just a wreck in recent weeks, with no good excuses.

So, Wednesday morning was perhaps partly about the conference saving face, although some of the damage is irreparable. The Big Ten's brand remains strong, but not nearly as strong as it was before the pandemic arrived and Warren botched the league's handling of it at almost every turn. For instance: The lack of communication between the Big Ten office and its football programs has been substandard, to put it kindly.

“To me, I’ve said this from the beginning, I don’t necessarily have an issue with the decision (to postpone the season),” Franklin said last week of the Aug. 11 vote. “I got an issue with the process, and I got an issue with the timing. To be able to stand up in front of your team and parents and tell them that the season is canceled/postponed, but not have any answers as to how that affects their future and when we will be playing football … that’s the hard part.

That changed Wednesday morning. Or at least we think it did. We've been burned before by the Big Ten.

It also should be said that COVID-19 can be highly unpredictable.

Moos can only hope the Big Ten's move up to varsity level is permanent this time.

Reaction from the Big Ten announcing a fall football season

Time to get back to work! #GBR pic.twitter.com/n0M7AUV5YJ

Let’s gooooooooooo !!!! Bdawg and Quice I know y’all looking over me family 🤞🏽 let’s do it got sum to prove..

Time to get back to work! #GBR pic.twitter.com/n0M7AUV5YJ

WE ARE BACK ☠️🎈 pic.twitter.com/OAd3GK0RG7

Nebraska Against The World ☠️ pic.twitter.com/HAMI0oz59L

hol up, i thought i heard somebody said “we’re back” 🗣😏🤟🏾 #JucoProd #B1G pic.twitter.com/ksXwohkErX

The plan is for the season to begin the weekend of Oct. 23-24, and it revolves around rigid coronavirus protocols.

Nebraska AD Moos says both he and UNL Chancellor Ronnie Green "pushed very hard" for the Big Ten to allow attendance based on local authorities.

The players were seeking a reversal from the league on its decision to postpone the season, which it on Wednesday announced was beginning in October.

Big Ten offers up parameters of 2020 football schedule. A full schedule likely will be announced in next few days.

Husker fans have spent 36 days gnashing their teeth and offering opinions on the Big Ten football season. Time to cool off.

The health department had been working with Husker Athletics on plans to safely allow fans at Memorial Stadium, but with the announcement that no tickets would be sold, the focus will now shift off campus.

Moos on radio: Nebraska's aggressive approach in wanting to play worked out well

"Well, we were vocal, and I've got to say it worked," Bill Moos said of Nebraska's mindset in pushing for a season.

Why you — the Husker fanatic — love the Big Red

What makes Husker football so unique? From walk-ons to national titles to the smell of Runzas and Valentino’s in the stadium, we look at 40 traits.

Nebraska is a program that prides itself on its ability to innovate. With the Big Ten not allowing fans, the Athletic Department looks forward to the challenge.

The Huskers will open the 2020 season Oct. 24 at Ohio State, followed by a home game against Wisconsin.

Rapid testing ensures 'a clean field,' and a ticket to a Big Ten football season

On-site rapid testing wasn’t as easily available last month. Now, teams in the Big Ten will be required to have daily testing no later than Sept. 30.

Memorial Stadium's north stadium video board projects the news of the return of Big Ten football in October on Wednesday.

Big Ten commissioner Kevin Warren talks to reporters after being named to the position during a news conference June 4, 2019, in Rosemont, Illinois.